31 May 2013
45
ATS President Bashar Al-Assad gave an interview to the Lebanese television channel Al-Manar, during which he stated that the secret of Syria’s resilience under current conditions is that no one could bring discord into Syrian society, split the Syrian army. "No one will sacrifice life for the sake of one person or an official post," Al-Assad said, adding that the current war in Syria is a war for the Motherland.
He also stressed that those who conceived the Syrian crisis did not take into account its national peculiarities and noted: "They declared what is happening in Syria as a revolution, forgetting that it is impossible to make a revolution with money." 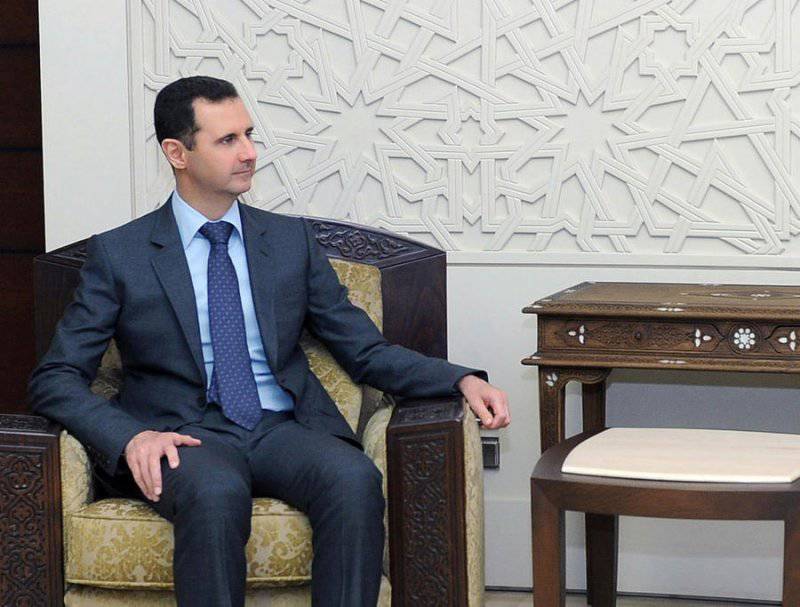 Answering the question of the journalist, why the authorities did not launch a decisive attack on terrorists, such as in Al-Keira, and participation in the events of the Hezbollah fighters, the President said: “The point is not in offensive or defense. that there was a change in the balance of power in favor of the Syrian army.

The scales swung largely due to the fact that those who previously thought that they were opposed to all the negative things in Syrian society understood that they were deceived ... As for the problem of Hezbollah, how many can send? Hezbollah fighters to Syria? Hundreds, thousands, 2 thousands? ... And we are talking about hundreds of thousands of servicemen of the Syrian army, if not one hundred thousand, then tens of thousands of militants, and do not forget that their number is constantly replenished from the outside, from the countries of the region and the world. The number of Hezbollah fighters defending the Syrian state in its struggle cannot be compared with the number of terrorists, the number of the Syrian army, or the vast territory in which the events take place.

All indications are that the battles for Al-Xayr concern a number of Arab countries and world powers. This excitement is associated with the desire to stifle the resistance movement. For example, the Syrian army had previously conducted successful operations in Aleppo, Damascus and its provinces, but none of them caused such a resonance, such shouts and laments. This is explained by the fact that small Al-Xayr is a strategically important entry point into Syria militants. Even UN Secretary-General Ban Ki-moon expressed concern about Al-Xeira. "

Referring to the recent act of Israeli aggression against the SAR, the head of state said that it was caused by the desire, first, to strangle resistance, and, secondly, to strike at the Syrian air defense system. “By its actions, Israel helped the armed groups, but its main task was higher goals stated. If we answered immediately, it would not be effective. We, if answered, then strategically.”

To the journalist’s question whether he meant opening the front in the Golan, Al-Asad replied: “The Syrian people, as well as a number of movements in different Arab countries, demand this and declare their readiness. Resistance at the front is not easy with political, ideological, social and military components. Not the state comes up with resistance, it must be popular and spontaneous, but the state supports or suppresses it. We declare that we will respond with a blow to the blow and for this we have several possibilities. "

Responding to a question about the supply of Russian systems C-300 and the related visit of Netanyuhu to Moscow, President Al-Asad said: "We usually do not distribute information related to military topics, but I will say that the agreement with Russia was not affected by the crisis We have been negotiating for several years for the supply of certain types of weapons. Russia fulfills the agreements. Neither Netanyahu’s visit nor the crisis affected them. Everything that we agreed with Russia will be made, and some of these agreements have already been implemented. "

Speaking about the upcoming conference on Syria in Geneva and the fact that representatives of armed groups and their flag are present at the negotiating table, the Syrian leader said: "The Syrian people will personify the SAR flag. We will participate in the negotiation process as official representatives of the Syrian people. And who do they represent?" When the conference ends, we will go home - to Syria, and where will they go? To five-star hotels, to the foreign ministries of the Arab states that they represent, to write reports, or to a special school. zhby these countries? "

President Al-Asad said that a preliminary agreement to participate in the conference depends on the details and conditions that can be presented before it begins.

Responding to a question about the conditions imposed by the Syrian leadership, the President of the SAR said that the only requirement is that any decisions taken at the meeting should be submitted to a referendum, in which all the Syrian people will take part.

Speaking about whether he feels the changes in the positions of Saudi Arabia, Qatar, Turkey and the Council of Foreign Ministers of Arab countries, which recently do not require the resignation of the president of the SAR, the head of the Syrian state said that although the words have changed, the actions have remained the same. "The states that provide support to terrorism continue to do this. For example, Qatar, which sponsors terrorist groups, provides them with finances through Turkey. As for the Arab League, we do not expect anything from it, most of its members carry out orders from outside. Although our doors remain open, we do not close them before anyone. "

Answering the question of what will happen if the conference on Syria does not succeed, Bashar Al-Asad said that such an outcome is quite likely, however, the main thing is the state of affairs in Syria itself. Countries that support terrorism will not abandon it, and armed groups will not stop their destructive activities.

The Syrian President noted that the events that took place in the Arab world for two years influenced the Arab consciousness to such an extent that some of them forgot who their real enemy, which is Israel, and hate settled within the Arab nation. The only force that reminds the Arabs that the enemy is in place, he has not gone anywhere, is Resistance.

As a result of the conversation with the journalist of the TV channel, the President answered the question about the feeling of confidence in the victory, whether the Syrian leadership has it. Bashar Al-Asad said: "If we were not confident of victory, we would not have survived 2 of the year in the context of international war, world war against Syria. Our confidence in victory is strong. We will continue the path of resistance, and its support at all points Arab region, but Syria will remain as it was, and even stronger. "

Ctrl Enter
Noticed oshЫbku Highlight text and press. Ctrl + Enter
We are
Bashar Al-Assad: We have absolute confidence in our victory (+ full text of the President’s interview)Interview by President Bashar Al-Assad to the Sunday Times
Military Reviewin Yandex News
Military Reviewin Google News
45 comments
Information
Dear reader, to leave comments on the publication, you must to register.