31 May 2013
16
The US Marine Corps Command has begun exploring the possibilities of extending the life of the AV-8B Harrier II attack aircraft at least until the 2030 of the year, reports Flightglobal. Initially, all planes of this type were planned to be written off already in the 2015 year, but after this the write-off period was postponed to the 2027 year. The decision to extend the lifespan of the Harrier II aircraft was caused by delays that arose with the supply of the latest F-35B Lightning II vertical fighter aircraft.


As the Julie Priss vice president of the Boeing Aircraft and Armament Support Division says, the US military is considering the possibility of deploying Link 16 systems on Harrier II aircraft. In addition, the attack aircraft are planned to be equipped with modern AIM-120 AMRAAM air-to-air missile systems and a detection system that would display information on the pilot's nalimon display. In addition, AV-8B Harrier II aircraft should receive new modern sensors that are compatible with pulse-Doppler radars that are installed on the aircraft.

The Harrier II aircraft was adopted by the United States Marine Corps in January 1984. Currently, the US Army, according to the information of the Flightglobal MiliCAS publication, has an 121 attack aircraft in the AV-8B / + version. In November 2011, the United States bought everything in the UK (except 2-x, sent to the museum) Harrier II GR9 / A aircraft. The amount of the transaction was 115 million pounds sterling (approximately 180 million dollars). American military planes purchased in England are going to be used as a source of spare parts for their own AV-8B / + Harrier II. 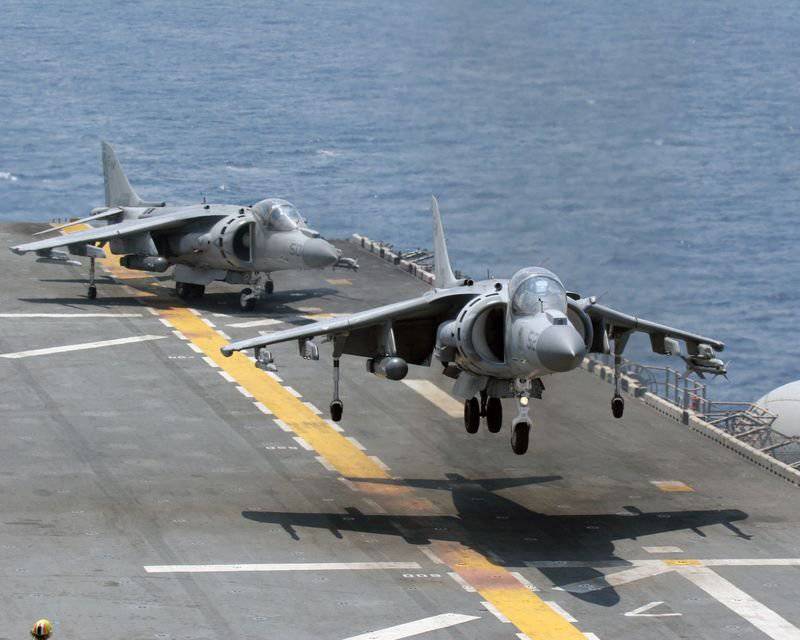 Harrier attack aircraft AV-8B is an advanced version of the early version of the Harrier AV-8A. This aircraft is characterized by a 1,5-fold increase in fuel supply, which made it possible to increase its radius of action by 1/3, and the engine's power was slightly increased. This aircraft, in addition to the US Marine Corps, is in service with the Italian and Spanish Navy. In the US Navy, the Harrier attack aircraft are based on landing helicopter carriers or universal landing ships. They are used as fighters and attack aircraft for striking surface and ground targets, aviation support for ground forces and air combat. In the USA, they are constantly working on the modernization of these vehicles: in particular, through the installation of a new control radar weaponsThe use of AIM-120 AMRAAM SD and Sea Eagle and Harpoon AGM-84 anti-ship missiles.

The planes in this version put a new radar APG-65 manufactured by Raytheon, which allows the use of a very large range of weapons. Also, equipment has been upgraded to allow night missions - night vision devices that include special Night Vision Goggles goggles (NVG), infrared sensors (Forward Looking Infra-red (FLIR), and special pilot cockpit equipment to the NVG standard. by the standard Hands On Throttle And Stick - HOTAS. The first attack aircraft, which were upgraded in this way, began to enter service with the American army back in 1988 year. 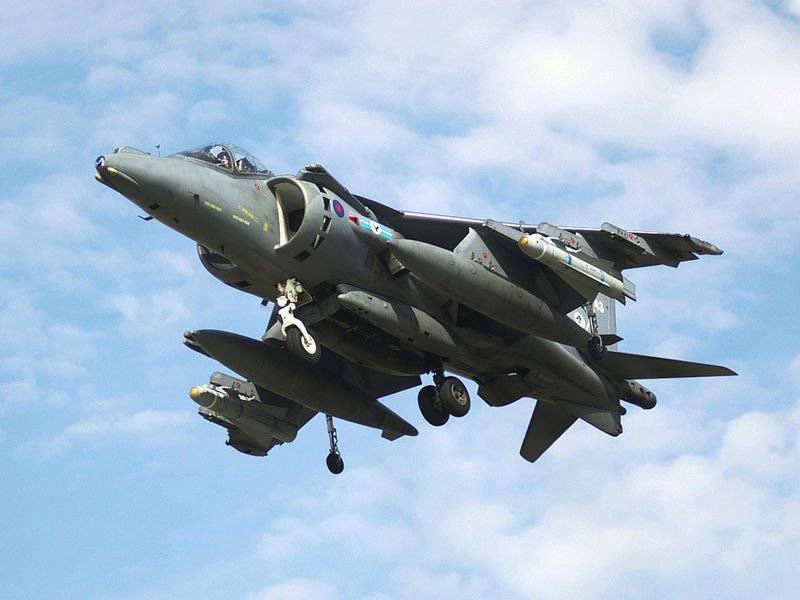 Structurally, the aircraft AV-8B "Harrier" II is a high-profile with one lift-marching turbojet engine with thrust vector control and bicycle gear. From its predecessor, the AV-8A, it differs in a number of technical innovations that were aimed at improving its flight performance. The most significant difference lies in the use of the wing, which was completely made of composite materials (the first such case on a combat aircraft in stories aviation) and having a supercritical aerodynamic profile.

In general, on the AV-8B Harrier II attack aircraft, the use of modern composite materials is 26%, as a result, the weight of the airframe was reduced by increasing the aircraft’s combat load and fuel capacity at the same time. Composite materials are also good because they can be used to produce monolithic parts that previously needed to be assembled from several elements. Thanks to this, there was a real opportunity to significantly reduce the number of bolted and riveted joints. As an example, the nose section of the attack aircraft fuselage, which is completely made of composite materials, can be cited. If the AV-8A attack aircraft, which had an all-metal construction, required almost 240 parts to produce this section, the AV-8B attack aircraft requires only 88, the number of fasteners was reduced 2,6 times.

The AV-8B attack aircraft has a high wing with a moderate sweep. The wingspan was increased from 7,7 m to 9,25 m, and its area accordingly increased. The use of the supercritical profile, which has a large relative thickness, made it possible to achieve almost 50% increase in the stock of fuel located in the wing-tank compartments. To increase the maneuverability of the aircraft in air combat, special overhangs were established at the root of the wing. On the nose of the wing of the aircraft are small aerodynamic ridges, and on the upper surface of the wing - 24 turbulator. 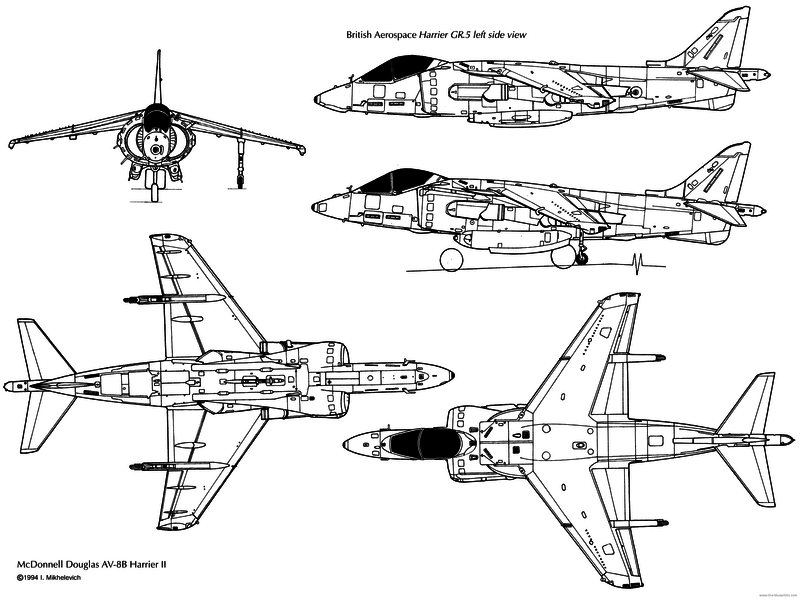 The AV-8B Harrier II attack aircraft has an all-rotary stabilizer spanning 4,24 m. Unlike its predecessors, the Harrier II stabilizer does not have a characteristic break along the leading edge. Composite materials are widely used in the design of the stabilizer, while the aircraft keel is made of aluminum alloys. The aircraft has a bicycle-type chassis with two wing supports. To facilitate the take-off of aircraft from the deck of aircraft carriers and highways, the chassis gauge on underwing supports was reduced compared to the previous version from 6,7 m to 5,18 m. The front landing gear has an 1 wheel, in flight this support retracts forward, and the main landing gear with coupled wheels - back.

The modern radioelectronic equipment used on the AV-8B “Harrier II” attack aircraft allows this (now not the most modern) machine to perform a fairly wide range of combat missions. During the development of the cockpit, the company McDonnell-Douglas widely used its experience in the design of the cockpit fighters F / A-18 and F-15. The dashboard on the Harrier II is focused in front, just like on an F / A-18 aircraft. The controls of the main armament, communications, navigation and identification systems are located on the top panel, which is located under the collimator indicator on the windshield (HUD).

Below were the usual arrow flight instruments, which play the role of a backup for the HUD indicator. On the left of the dashboard is a color multifunction display. This display displays navigation information, an image from the Maverik missile guidance system, data from the ARBS bombing system, warning signals about the aircraft’s radar exposure, and information about the management of the weapon system. Other information needed by the pilot can also be transmitted to the display. To the right of the pilot on the dashboard is a color display controlling the operation of the engine and the amount of fuel. The controls of the main attack aircraft systems are located on the control stick and the throttle control, and the cockpit of the aircraft was designed so that the pilot does not need to remove his hands from the control stick and the throttle control in air combat and during a ground target attack. 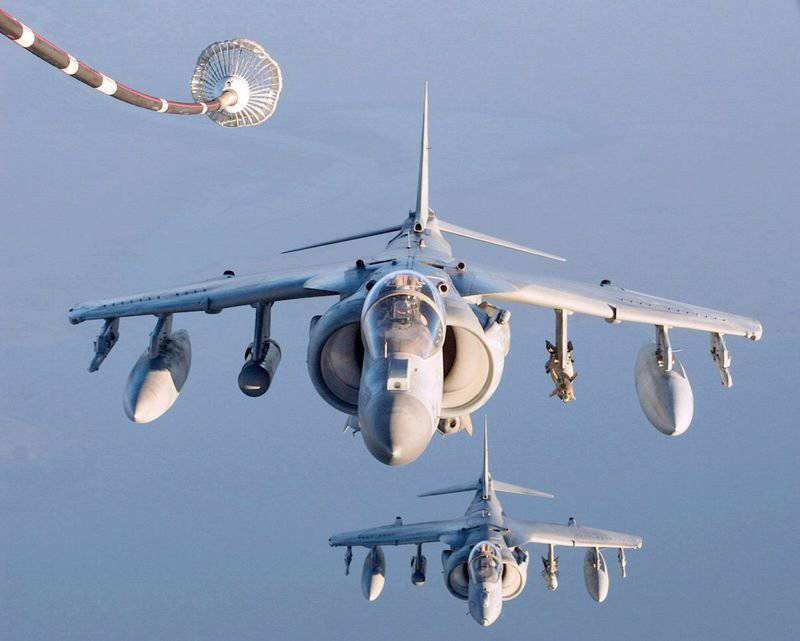 The AV-8B “Harrier” II attack aircraft can conduct combat operations day and night in any weather and has sufficient maneuverability to get away from enemy air defense fighters. His main tasks in the US Marine Corps are all types of air attacks: dive bombing and horizontal flight, delivery of cluster and conventional bombs, special bombs and laser-guided bombs, as well as air-to-surface and NUR missiles. The Harrier II attack aircraft, like all previous planes of this type, has 2-me-off-ventral units for the suspension of cannon-armed containers.

For firing at ground and air targets for the AV-8B, the 1x25-mm General Electric GAU-12 / U five-barreled automatic gun was chosen; her ammo is 300 shells. The GAU-12 / U itself is located in the left container, and in the right - its ammunition is located, which is folded into a multi-layered tape magazine. The whole system with ammunition weighs 558 kg. Between the nodes intended for the suspension of the artillery system containers, there is another central suspension hub for accommodating loads weighing up to 258 kg. Here bombs, photo reconnaissance equipment or a container with a radio-resistance system can be suspended.

Under the wing of the attack aircraft are located 6 nodes of the main armament suspension. The maximum mass of the combat load on the nodes of the winged suspension and one central ventral node is 4173 kg. A typical attack load on the AV-8B Harrier II at the wing assemblies consists of: 4 or 2 UR air-to-air missiles AIM-9L Sidewind; or the same number of air-surface "Harpoon" or AGM-65E "Maverick"; up to 16 high-explosive aerial bombs weighing 227 kg, up to 10 bombs with a laser guidance system "Peywey", up to 12 cluster bombs; to 8 incendiary bombs; up to 10 containers with NUR; 2-containers with guns; up to 10 containers with emitters or dipole reflectors.