31 May 2013
1
I will not be mistaken if I assume that everyone who is “shifted,” in the good sense of the word, on a gunshot weapons with non-standard solutions in the design, they know about the Croatian large-caliber rifle RT-20, in which exorbitant returns when fired are extinguished by means of a reactive exhaust of powder gases behind the weapon. For grenade launchers, such a system is quite familiar, but for a large-caliber rifle this is very rare. However, rarity does not mean that this is the only model with such an original design. As I often said, all that “has no analogues” has ancestors in the late nineteenth and early twentieth centuries. In our case, everything is somewhat different, although on the other hand, the Croats did not claim the absolute uniqueness of their weapons. “Relative” RT-20 was found in 1942 among the Swedish anti-tank rifles.

PTR with a similar method of damping the return appeared due to the active development of lung control tanks and lightly armored vehicles in Sweden. The company "Carl Gustav" has developed a truly original model of weapons and ammunition for it, and the anti-tank rifle itself was very light, about 2-3 times lighter than its compatriots, had a very tolerable return and at the same time could boast of breaking through 40 millimeters of armor at a distance of 100 meters. The most interesting thing is that the weapon did not even have bipods as such, if necessary, resting on the ground on the shoulder rest, a curved tube was put on, which served as a bipod. Well, now the most important thing is the ammunition of the weapon.

Especially for this anti-tank gun was developed cartridge with the metric designation 20x180R. Despite the fact that the ammunition had a sufficiently large powder charge, not all of it was used to disperse the bullet through the barrel of the weapon, much of it just flew into the air when fired, to counteract the exorbitant recoil that could be when using the same cartridge in a closed system, just break the bones arrow. Despite the fact that the powder charge is not fully used, the bullet weighing 150 grams accelerated to the speed of 800 meters per second. A lighter bullet, weighing 108 grams, accelerated to 950 meters per second. The results are quite good, and on condition of a reasonable return of the weapon, they are just wonderful. 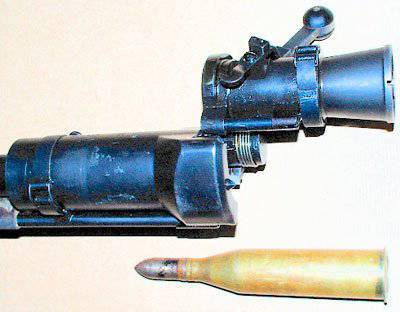 As mentioned above, recoil damping when firing a PVG M / 42 anti-tank rifle is carried out with the help of a jet of gunpowder gases emitted from the rear of the weapon. In the Croatian RT-20 large-caliber rifle, the powder gases are discharged from the bore through several holes into a separate tube. In the PVG M / 42 anti-tank rifle, everything is carried out simultaneously and simpler and more complicated. The simplicity lies in the fact that the jet exhaust is carried out immediately behind the barrel, without separate parts, which significantly reduced the weight of the weapon. The difficulty is that in order to accomplish this, I had to make a sleeve with a plinth, which the powder gases are knocked out. Thus, the cost of already expensive ammunition has increased significantly, and the quality of these cartridges should have been at the highest level so that the bottom of the sleeve would fly out exactly when it is required. 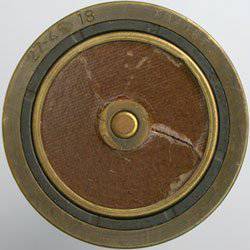 In itself, the PVG M / 42 anti-tank rifle is a very simple model, consisting of a barrel, a simple trigger mechanism and a bolt opening the chamber during a turn. The weapon is single-shot, which creates certain inconveniences when reloading due to the location of the shoulder rest. So in order to reload the anti-tank gun it was necessary to remove it from the shoulder, or to wait until the second fighter crawls out of the calculation for reloading and crawls before firing. It was necessary to crawl the loader a lot and quickly, since the jet stream escaping from behind the weapon could teach to move quickly. But, oddly enough, there were no cases when someone preferred to learn to crawl with such a tough motivator. In addition, it was not worth forgetting that the liner of the case flew out along with the jet, which, although it was flying close, could also have injured a fighter who was looking at the gap.

The weight of the PVG M / 42 anti-tank gun was 11 kilogram with a length of 1450 millimeters, so that the weapon could well be carried by one person, for which a carrying handle was welded on top. The length of the anti-tank gun was equal to 1114 millimeters, the effective range of use to 300 meters, however, it all depended on the goal that had to be reached. 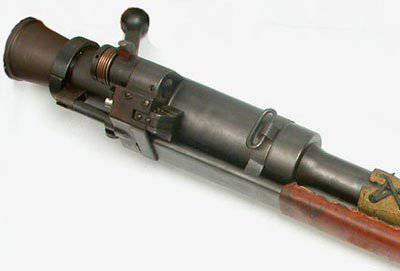 Many consider this PTR unsuccessful, and a kind of mistake. With many arguments you can not argue, in 1942, the time of anti-tank guns was already coming to an end, and their effectiveness inexorably dropped to zero. On the other hand, in addition to tanks, there was also other armored vehicles, fortified firing points, after all, light tanks, at which the anti-tank guns were fired very effectively. Do not also forget about the grenade launchers, which continued the matter of the PTR, and with them this sample has a certain similarity. In other words, this anti-tank gun gave invaluable experience to designers in the fight against recoil in recoilless systems, and this is not enough. Yes, and the PTR itself has received a good distribution, since it was released 3219 weapons.