31 May 2013
13
Soon after the appearance of the famous "plant series" of self-propelled artillery installations (2С1 "Carnation", 2C3 "Acacia", etc.), the Soviet defense industry began work on the next generation of similar systems. Abroad, in the NATO countries, at this time a new concept was being implemented, according to which all self-propelled artillery should have a single caliber - 155 millimeters. The Soviet military and engineers, having considered and evaluated Western ideas, came to the conclusion that such work was necessary. It was decided to build a new SAU with firepower at the level of the 2C3 “Acacia” combat vehicle, but at the same time with significantly smaller dimensions and combat mass. So started the project Pat-S 2C18. 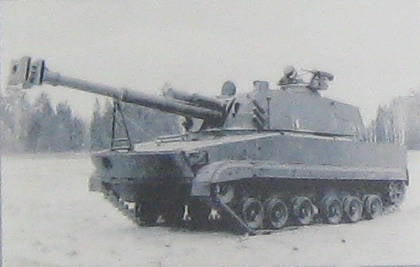 In the early eighties, the new project reached the stage of construction and testing of the first prototype. The designers of the Kurgan Machine-Building Plant in the course of the project had to solve several serious technical problems, primarily related to structural strength. It was necessary to find a chassis capable of withstanding the return of large-caliber guns, or to install a gun with a lower efficiency on the new ACS. As a result, we managed to find the optimal combination of the base chassis and weaponswhile meeting the requirements for size and weight. The finished self-propelled gun with fuel, crew and ammunition weighed about 18,7-18,8 tons, which suited the customer.

The newly developed tracked chassis of the infantry fighting vehicle BMP-2 was taken as the basis for the 18C3 ACS. The chassis was equipped with a multi-fuel UTD-10 29 X-cylinder diesel engine with 450 horsepower. With such a power plant, the Pat-S self-propelled gun could accelerate along the highway up to the speed of 70 kilometers per hour and overcome at one gas station to 600 km. In addition, thanks to the use of the BMP-3 chassis, the new combat vehicle was able to cross the water at a rate of up to 10 km / h.

On the modified shoulder strap of an armored case, a new rotating tower of relatively large size was installed. As the main weapon self-propelled guns 2С18 chose howitzer 2А61 "Pat-B", developed earlier by the Sverdlovsk OKB-9. The 152-mm gun was originally created as a towed howitzer for the regimental artillery, but it was also decided to use it on a self-propelled gun mount. Before installation on the self-propelled chassis, the howitzer was finalized, after which it received an index 2А63. When choosing a tool for self-propelled guns took into account its relatively low returns. The fact is that initially the 2А61 howitzer was executed on the modified gun carriage of the 2А18 (D-30) gun, which had a smaller caliber and, accordingly, less recoil energy. In order to avoid damage to the structure of the gun carriage, a new howitzer was equipped with effective recoil devices and a muzzle brake of the original design. It is worth noting that the appearance of the latter has become a distinctive feature of the instrument, by which one can recognize it.

Like all domestic artillery caliber 152 millimeter, howitzer 2А63 had a separate-cartridge loading. To facilitate the work of the calculation tool equipped with a mechanism for filing. It is noteworthy that this unit was originally created for the towed version of the howitzer and was only refined for use on self-propelled guns. Experienced gunners could fire from 2А63 at speeds of up to eight rounds per minute. The maximum range of shooting - 15200 meters.

For self-defense self-propelled gun equipped with one PKM machine gun on the turret at one of the tower hatches and smoke grenade launchers. In addition, after adopting the armament, the crews of the self-propelled Pat-S could receive personal weapons for self-defense, for example, machine guns and grenades. At the same time, the number of machine guns could be significant, since the crew of the SAU consisted of five or seven people (when feeding ammunition from the ground).

The result was a relatively small and light self-propelled artillery installation, which, if necessary, could be transported on existing military transport aircraft and, possibly, parachuted. With low weight, the new 2C18 self-propelled gun had good firepower and was able to use all types of 152 caliber millimeter shells available at that time, including probably nuclear ones. Finally, the Pat-S combat vehicle did not need bridges and, if necessary, could independently navigate water obstacles.

In the early eighties, the Pat-S self-propelled artillery 2C18 "Pat-S" was tested and did not satisfy the military. The project was closed for hopelessness. Accurate data on the reasons for the refusal of the prospective ACS by the Ministry of Defense are still missing, but there are grounds for some assumptions. First of all, it should be noted that the armored hull, the power plant and the undercarriage of Pata-S probably did not cause any complaints, since in the future they switched to the new SAN 2X31 Vienna. Thus, the reason for the claims should be sought in the complex weapons of the machine.

The first is the shooting range. Despite a larger caliber and a more powerful charge, the 2А61 / 2А63 howitzer sent shells for only 15 kilometers. For comparison, the 122-mm self-propelled howitzer 2C1 “Carnation” had the same sighting range. Thus, the new 152 caliber millimeter gun exceeded the old 122-millimeter only in the power of the projectile and partly in the rate of fire. As for self-propelled artillery caliber 152 millimeter, the SAU "Pat-S" did not have any particular advantages over the existing "Acacia" with a gun 2А33. So, the older 2C3 self-propelled gun could hit targets at a distance of up to 20 kilometers and transport in the fighting compartment to 46 shots. With respect to the 2C18 ammunition, exact data is not available. In various sources, figures are given, according to which the Pata-S transported ammunition did not exceed 35-40 projectiles and charges to them.

Thus, the advantages of the new self-propelled artillery installation were only a small combat mass, which allowed the car to be transported by transport aircraft, the ability to cross reservoirs, as well as a light chassis, unified with the new infantry fighting vehicle. Armament, in turn, either did not have any advantages over existing systems, or lost to them in one way or another. This ratio of positive and negative sides of the project 2C18 as a result led to its closure.

Very interesting is the fate of the components of the failed self-propelled gun. The Pat-B towed version of the 2А61 is occasionally displayed at various exhibitions and offered for export (the M-389 version for shells of the NATO 155 caliber mm standard). In the early nineties, the Pat-K project appeared, during which it was planned to install the 2А61 howitzer on the Ural-5323 wheeled chassis. Such a self-propelled artillery mount also did not go into the series. More promising and lucky was the BMP-3 chassis, which was modified for the 2C18 ACS. In the second half of the eighties began designing a new self-propelled 2C31 "Vienna". Initially it was planned to build it on the basis of the modified Carnation chassis, but then the Pata-S chassis was chosen.

To date, a number of self-propelled 2C31 “Vienna” self-propelled guns are being used in the missile forces and artillery of Russia. The only built prototype of ACS 2C18 "Pat-S" was used in the construction of the prototype "Vienna" in the nineties. According to some information, its chassis is still stored in Perm on the territory of the Motovilikhinsky Plants enterprise. The fate of the 2A63 turret is unknown.