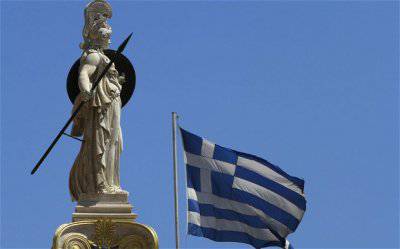 Loud terrorist attacks in Boston, London and Paris alarmed many Russians traveling abroad. On the eve of the mass leave season, the issue of security at resorts was particularly acute. A recent assassination attempt by a Dutch animator of a Russian boy, who was vacationing in Greek Crete, excited tourists. Should I go to Greece? Will local special services protect in case of a terrorist act?


The observer of the Academy of Sciences asked to dispel the anxieties of future spa visitors of Alexander Georgievich Khristoforov, who had just returned from Athens, a veteran of Soviet and Russian intelligence.

The first place of Hellas

Lt. Col. Christopher even retired retained a peculiar sense of humor. So this time he tried to pin up the AN browser:

- What currency will you pay for a consultation with a poor pensioner? I prefer the liquid.

Alexander Georgievich efficiently poured into cups the strongest coffee in Greek. And then he began to recall his work in the Athenian residency of our intelligence. During the Cold War, Ellada was viewed as being advanced by the “outpost of the West” against the USSR. Then Athens was flooded with agents of the American CIA and the Soviet KGB. According to the local press, The headquarters of the CIA in Greece at that time was the third largest in the world. Soviet intelligence there is also missing. If we take into account the small size of the country, then we can safely say that if you divide the number of CIA and KGB agents by the total number of Greeks, then Hellas clearly ranked first in the world in the number of agents "per capita". No wonder the former head of the Strasi GDR special services Marcus Wolfe called Greece a “spy haven”.

However, the local military - "black colonels" - were only friends with high-ranking leaders of the American intelligence service in Athens. By John Fatsea and John Stevens. The United States took on the task of teaching the Greek fighters LOK (mountain sabotage detachments) and established close ties with the service National Security (TEM)which had the most extensive network of informers across the country.

With the help of the Greek special services, the Americans delivered tangible blows to our Athenian residency. Among them is the recruitment and removal to the United States of two high-ranking officers of the Soviet intelligence services who worked in Athens "under the roof" of the Soviet embassy: Deputy resident of the KGB Viktor Gundarev and deputy resident of the GRU (military intelligence) Sergei Bokhan. Together with these traitors, virtually all the secrets of Soviet intelligence in Greece fell to the West. It is no coincidence that a short time after their flight to the US in Athens, a journalist’s book came out. Pavlos Anastasiadis "Dancing with the Bear: The KGB in Greece". It described in detail many of the operations of the Soviet secret services in Hellas: from stealing the secret blueprints of the American Stinger portable missile and “ideological” sabotage by creating in Greece pro-Soviet prints before the secret funding of organizations "fighters for peace." Some consider the operation of the KGB in Greece even a strange marriage to the daughter of the legendary shipowner Aristotle Onassis Christina and a citizen of the USSR Sergey Kauzov. According to a number of sources, the KGB tried in such an exotic way to establish control over a gigantic shipping empire. Onassis

Alexander G. also told such a curious case of opposition to technical intelligence services. At the height of the Cold War, the CIA, with the help of the Greek special services, made every possible attempt to introduce its eavesdropping technique into the Soviet embassy in Athens. They even built a hotel close to the embassy building. In the wall of the embassy building adjacent to the hotel on all three floors with access to workers' and service premises, technical intelligence officers of the KGB revealed hidden holes leading to microphones embedded in the wall. Then there was an incident: our scouts began pulling the equipment laid by the wires, and their spies from the other side pulled them to themselves. But our employees were stronger. They got a lot of trophies.

For a long time, the residents of the CIA felt masters in Athens. But after the fall of the "black colonels" junta, the paradise for American spies ended. Hell come.

Help "AN"
The main intelligence and counterintelligence body of Greece is Central Information Service (KIP), subordinate to the prime minister.

The TRC directly conducts agent work both domestically and abroad, makes arrests and investigations, and dismisses employees of the state apparatus in the event materials are received about their political unreliability.
The system of counter-intelligence agencies in Greece includes "Allodapon", "Asphalia" and "Alpha-2".

Allodapon is a service of the Greek Ministry of the Interior. Consists of departments: general issues, especially secret cases, personnel and the passport and visa department. Operational departments of Allodapona are built according to the territorial principle: the department of the Slavic countries, the Anglo-French and the Austro-German departments. Allodapon is working among foreigners working in the official representative offices of foreign countries in Greece.

Asphalia is the security service of the main police department of the Ministry of the Interior of Greece, which is the main body of political investigation.

Alpha-2 is the second bureau of the General Staff, which performs the functions of military intelligence and counterintelligence.

The elusive avengers from "17 November"

Athens was First Secretary of the US Embassy Richard Welsh was killed, and in fact the CIA resident in Greece. He was shot dead by three young men who acted coolly and confidently: they were killed in broad daylight, in front of the wife of an American and his chauffeur. Responsibility for the crime assumed before this unknown terrorist group "17 November."

The very name of the terrorist group is symbolic: November 17 is the date of the dramatic anti-dictatorial uprising of students of the Athens Polytechnic Institute and its cruel suppression by the junta, from which, in fact, began its fall.

Since then, for a quarter of a century, terrorists from “17 November” have already killed 23 people in Greece - mostly diplomatic spies. The loudest assassinations are the murder of the captain of the US Navy George Tsantses, heads of a group of American military advisers. Then from remote-controlled bombs killed the naval attache of the US Embassy, ​​William Nordin. He was not helped by an armored limousine; in such vehicles, workers from the American embassy and the military began to travel to Athens in Athens. Since then, the headquarters of the CIA in Langley Greece is considered a hot spot on a par with Iraq, Afghanistan and Pakistan.

For a quarter of a century, none of the terrorists who killed American spies was caught. Therefore, the columnist "AN" asked Lieutenant Colonel Khristoforov:

- And how can you explain such a strange elusiveness of "17 November"?

- For a long time, the teachers declared that there were powerful behind this secret organization KGB and Stasi. But these offices are long gone, and Western spies still consider Greece to be hell. In my opinion, closer to the truth George Kassimeris, author of the book The Last Red Terrorists of Europe, dedicated to "17 November". In his opinion, this group cannot be discovered primarily because of the weakness of the Greek police and special services, who do not have any proper training, no means, no discipline. Better, he suggests, it would generally dissolve the current Greek secret service and in its place create a completely new organization. However, now this in Greece do not want neither the right nor the left. Due to the acute financial crisis, there is a catastrophic lack of money.

Alexander Georgievich said that the Greek special services themselves and to this day would hardly have found the terrorists from “17 November”. But Western intelligence helped. At the beginning of the 2000's at the hands of the Greek ultraleft British military attache Stephen Sanders, an ICU resident, was killed. Special services of the Great Britain were directly connected to the investigation. In several traces established by criminalists, compared with the materials of British intelligence, they managed to reach the Greek terrorists. In the dock in the case of the organization "17 November" was about one and a half hundred people. The trial was held behind closed doors, under the strictest secrecy. The defendants received long prison sentences. West celebrated victory. At receptions in the western embassies, spies drank champagne. But the joy of American and British agents was short-lived. As if in a mockery of them in 2003, a number of extremist actions were carried out by an organization that identified itself as "The revolutionary struggle". Experts believe that it originated on the wreckage of "17 November" and is its direct heir.

So everything is back to square one. The new terrorist structure is now almost as invulnerable as the “November Christians” were. They say she has strong ties with all the enemies of America, including Al Qaeda.

“You were told about such horrors about spies that some people now would not risk going to Greece!” - Browser "AN" put an empty cup on the table. - Why do you go to Athens regularly?

- I love this ancient city. And in Greece, everything is there, even the threat of terrorism. - Lt. Col. Christopher took the last sip of coffee. “But where is it completely safe now?”