Who will get Transnistria? 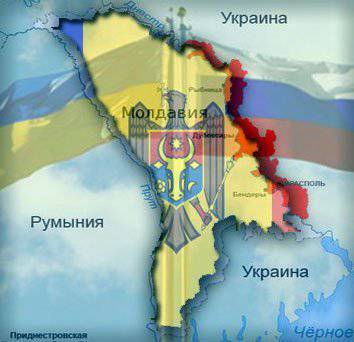 Recently, in the Ukrainian and Western media more and more often began to appear information that Transnistria could become part of the Ukrainian state. The first such rumors appeared in April 2010, in Kiev, but they were perceived rather as a provocation. Then O. Bilous, one of the representatives of the BYuT party, stated that there was some kind of secret agreement between Moscow and V. Yanukovych, according to which Transdniestria is moving away to Ukraine. Moreover, it is not clear why Moldova, having lost the unrecognized republic, itself had to fall under the control of the Kremlin.


Later, however, other statements appeared. So, in particular, according to the Romanian President Traian Basescu, Moldova can become part of Romania, but only if the entire population living on the banks of the Prut (that is, the rivers connecting the two states) want to unite within the European Union. . At the same time, the border itself will pass along the Dniester. From these words, many have come to the conclusion that Bucharest agrees to sacrifice Transnistria in order to swallow Chisinau.

And soon, in March of 2011, a very interesting telegram appeared in one of the Romanian newspapers, which was previously published on the notorious Wikileaks. According to journalists, it was sent from the American Embassy in Ukraine to Washington. It dealt with the fact that the Moldovan political elite, adhering to the course of European integration, informally supported Moldova’s accession to the European Union with the help of Romania, joining the right bank of the Dniester and returning the left (that is, Transdniestria) to Ukraine.

In addition, Igor Smirnov, President of Transnistria, recalled that as early as the beginning of the 1990s, the republic’s government had already appealed to the Ukrainian authorities to become part of Ukraine as an autonomy. According to the politician, the desire to join Ukraine exists at the present time.

Of course, at first glance, all this may seem unreal and even fantastic. However, it is worth carefully analyzing all the factors that may contribute to the implementation of such a scenario, while not losing the motives of all interested parties. And first of all it is necessary to start from Tiraspol itself.

First, it is very difficult to believe that Igor Smirnov, who for two decades led the republic, calmly agree to join Transdniestria to Ukraine. The reason for all the statements of the politician is much more prosaic - the pressure of Russia.

Shortly before the next presidential elections were to be held in Transnistria, Moscow decided to support rival Anatoly Kaminsky, Smirnov, who is related to the Sheriff holding. Against Smirnov, Moscow led a powerful PR campaign. In order to even more “dampen” his reputation, the Kremlin decided that it was necessary to call and interrogate Oleg's Smirnov’s son on suspicion of embezzling 160 million rubles, which Moscow allocated for the calculation of pension allowances to residents of the republic.

At the same time, Smirnov’s positions still remain fairly strong, so Kaminsky repeatedly had to, and more than once, will have to justify himself that he does not intend to give up an independent republic of Moldova. By the way, this is not the first time the authorities have used this technique. So, we recall, in the 2006 year, when presidential elections took place in the country, the government accused its opponents of intending to join Transdniestria to Moldova ...

But, by and large, there is no point in analyzing all the behind-the-scenes intrigues that occur in Tiraspol. It suffices only to note that, despite all the differences, the Smirnov government for years already 20 somehow gets along with the holding "Sheriff", which can not be legalized. By the way, Sheriff is a leading company that controls a lot in the country, including petroleum products, mobile communications, television and even brandy factories. It is possible that despite the profitability, the holding's business is very vulnerable and it needs more weighty guarantees. But even if integration with Moldova does not work out, maybe something similar can be “cranked up” with Ukraine?

If we talk about V. Yanukovych and his environment, then their motives are very serious. First of all, it should be noted that the Ukrainian head of state has not yet stopped his wars with Maidan. Therefore, the accession to Ukraine of Transnistria is, first of all, a powerful trump card against the opposition: the Romanians received the shelf near Snake Island thanks to the democrats almost as a gift. By contrast, the Regionals will bring a whole autonomy into the country ...

In addition, analysts and political scientists believe that with the accession of the republic in Ukraine there will be another very large region with a population of about 520 thousand people, which will be a good support for the pro-presidential forces. And if we take into account the fact that the population of Transdniestria actually treats adoration towards Russia, then it is not necessary to think long and long about how it will relate to Banderovites.

There is another compelling motive - this is the great desire of the Ukrainian government to take over the industry of the Transnistrian republic, but Russia is unlikely to allow such a development of events ...

As for the Kremlin, the motives are much more interesting. On the one hand, it is not entirely clear why Moscow needs this, because there is no benefit from the republic. On the contrary, the support of Tiraspol is a very expensive business. Judge for yourselves: Transnistria’s natural gas debt reached only 2011 billion dollars in 2,8 a year, it increased another 2012 million in 300 (by the way, this is 10 million more than export volume of Tiraspol in six months). If we add to this sum the maintenance of the Russian operational group of troops, it turns out that for a year the maintenance of Transnistria costs about one billion dollars in Moscow ...

And with such expenses almost no political advantage. After all, when Romania began to deploy American missile defense missiles on its territory, it became obvious that the Kremlin had no leverage against it. In this case, rather, Moldova can turn into a good trump card of Russia in bargaining with Romania, because consent to give Chisinau could be a bait for which Bucharest will bite and will want to reconsider its political priorities. At the same time, it is important to note that Romania’s absorption of Moldova will not turn it into a powerful state. Just the NATO border will move another one and a half hundred kilometers to the east. In addition, Transnistria may be left out, which the Russian government cannot afford. At the same time, the unrecognized republic cannot join Russia either, because there are no common borders between the countries.

But not everything is so hopeless. There is another option in which the Kremlin can win a lot. And if it is correct to “play the cards”, then Transnistria will not only later return to the control of Russia, but also bring with itself Ukraine. Together with the new autonomy, the Ukrainian state will receive not only good support, but also several hundred thousand people with Russian citizenship. And in conditions when the Ukrainian economy is experiencing not its best times, and the international isolation of the state is only increasing, a situation may arise that there simply will be no other options than the Customs Union. In turn, the Kremlin will no longer want to accept Ukraine, but will require certain political and economic concessions.

The Kremlin could also try to bet on an independent Moldova, because besides certain diplomatic guarantees, Moscow would agree to the transfer of the Transnistrian Republic to Chisinau. This, in turn, would be a powerful brake on the unification of Moldova and Romania. At the same time, we should not forget that in the world there already existed a similar experience in the Baltic States, where the share of the Russian-speaking population is huge, but all these people are unable to resist the anti-Russian policy pursued by the authorities.

Ukraine, which already has an autonomous republic of Crimea in its structure, is trying in every way to isolate itself from attempts to drag it into the Transnistrian conflict, because the inviolability of borders was a priority for all presidents. Kiev pursued a very cautious policy regarding the republic, remembering that 150 lives in the thousands of Ukrainian population, but at the same time it never forgot that Transdniestria is in fact part of Moldova.

Now, with his government, Yanukovych can climb where he has no chance. And if all the statements that appear and appear in the press prove to be true, Ukraine’s role may be different: either Yanukovych, being in complete international isolation, will simply be forced to play according to someone else’s rules, or Ukraine will become a pawn in foreign geopolitical games because of stupidity.

Ctrl Enter
Noticed oshЫbku Highlight text and press. Ctrl + Enter
We are
Moldovan independence: 24 of political uncertaintyThere are more Romanians in the world than Moldovans and Ukrainians think
Military Reviewin Yandex News
Military Reviewin Google News
58 comments
Information
Dear reader, to leave comments on the publication, you must to register.