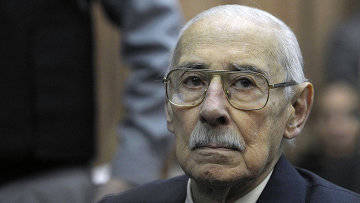 Although this Argentine soldier was at the head of a dictatorship, at the hands of which ten times more people died than in Chile, the circumstances of the upheavals, the repressions and the real power of these two people differed radically from each other.


Both were military and had a mustache. Both seized power after coups d'état. On their hands is the blood of the opposition, whom they tortured to death. They both tried to judge. Despite the sometimes strained relations, they both worked together and received help from the French military in a vile war against their own people. The first one was Augusto Pinochet: he ruled Chile with an iron fist from 1973 to 1990 a year. After being questioned in law enforcement, the dictator died in his bed in December 2006. The second was Jorge Videla ...

he was even more violent than Pinochet's dictator in Argentina from 1976 to 1981 the year when he was replaced by another putsch general. He was tried, convicted, pardoned, then tried again. 17 May Videla died in his prison cell.

In 2006, the death of Augusto Pinochet was written on the front pages of newspapers and talked in all issues News. They remembered the oppositionists driven to the stadiums, Allende’s death in the presidential palace on September 11, 1973, massacres, torture of Victor Jara and death in exile of Pablo Neruda, whose circumstances are still not completely clear.

At the same time, the European and French press squeezed out just a few lines about the death of Jorge Videla, although the repression in his country was much more severe than in Chile: the number of dead and missing as a result of the repression in Argentina is estimated at almost 30 000 against "all" 3 000 in Chile. These monstrous figures say a lot about the cruelty of the Argentine regime, which, by the way, lasted only seven years, unlike Chile, where Pinochet left the presidency only in 1990, but later became the commander of the ground forces.

What is the reason for such a different attitude to these two people? The reasons are more than enough. One of the main, no doubt, is that Pinochet died without answering for his crimes.

In 1998, he was temporarily under house arrest in the UK: Spanish judge Baltasar Garzon (Baltasar Garzon) issued an international arrest warrant for a former dictator on charges of crimes against humanity. Margaret Thatcher visited him and called the man "who brought democracy to Chile." At the same time, she completely forgot that he began the path with the destruction of this very democracy. A year and a half later, he was released back to Santiago for health reasons.

An expert on the region and author of a wonderful book on Latin American dictatorships Alain Rouquié offers a number of other explanations.

The first is that the coup d'état in Argentina 1976 of the year (occurred three years later after the Pinochet putsch) was directed against a criminal government led by Isabel Peron and Jose Lopez Rega, nicknamed "sorcerer" ( Alain Roquier calls him "someone like Rasputin"). The detachments of the death of the government even then killed and tortured the opposition, and its economic policy drove Argentina to a standstill.

The coup d'état of 1976 passed without clashes and mass arrests of oppositionists. In addition, on coming to power, the statements of the junta sounded encouraging. “The junta declared that it wants to put an end to the aggression of the ultra-left and death squads by Peron,” explains Alain Rookier. - I saw myself represented by a moderate politician. His rhetoric sounded so convincing, and coups d'état became part of the political landscape in Argentina so long ago that the left favored it. The illusion was so strong that even the Argentine Communist Party initially expressed support for the junta’s moderate leaders. ” Thus, the coming to power of Videla was perceived in Argentina and other states much better than the coup d'état of Pinochet.

However, in reality everything turned out differently. Behind the tough, but moderate facade of Videla’s power, there was a ruthless policy of eliminating the opposition, which was carried out without fanfare, unlike in Chile, where the opposition was driven to stadiums. Thousands of dead and missing people, the opposition members who were taken away by plane, were drugged and thrown into the sea, children of women tortured to death passed into the families of military men ... The list of crimes is frighteningly long.

In Chile, repression was carried out in the most centralized manner, and the whereabouts of detained people usually became known. In Argentina, everything was assigned to a group of officers who received carte blanche for actions in a particular region, could torture and eliminate oppositionists, and their places of “work” were usually kept secret. “The policy was clearly aimed at dispersing forces. The right hand does not know (and does not want to know) what the left hand is doing, ”says Alain Rookier.

In addition, if Pinochet consistently eliminated all his rivals and became the undivided master of the country, the Argentine dictatorship was a real junta with representatives of the three types of troops (land army, air force, fleet), and Videla - just her face. Further, in 1981, Viola came to take his place, whose place then moved to Lacoste and Galtieri.

Seel cannot be called the real dictator of Argentina compared to who Pinochet, Franco and Salazar were in their states. He was only the "official representative" of the dictatorship, which showed unprecedented cruelty under the cover of moderation and got rid of him five years later. “In the end, we can say that there is nothing particularly interesting about his death in prison,” says Alain Rukier.

All this, no doubt, explains such a different media approach to the coverage of the death of Pinochet and Videla. The first embodied the dictatorship, while the second was only her face.

Ctrl Enter
Noticed oshЫbku Highlight text and press. Ctrl + Enter
We are
Persons of the present Russia: about those who left their blood forever in the Syrian landCarabinieri case. Public Security Forces in Chile
16 comments
Information
Dear reader, to leave comments on the publication, you must to register.