Articulated "ice ax" for the North

31 May 2013
18
Last Tuesday, on May 28, the Minister of Defense, S. Shoigu, visited the 3 Central Research Institute of the Ministry of Defense in Bronnitsy, where he was shown the latest developments of military vehicles. During this visit, both the modified machines of the old projects and the new developments were demonstrated. Of all the types of equipment shown, the DT-3PB armored tracked vehicle is of the greatest interest, the prototype of which was first shown at the last event.


An armored transporter with a tracked undercarriage DT-3PB and a multi-purpose vehicle DT-4P were designed and built at the Rubtsovsk machine-building plant, which is now a branch of Uralvagonzavod, in the course of work on the topic “Ice ax”. These machines are primarily interesting in that they belong to the class of articulated tracked vehicles. DT-3PB and DT-4P consist of two main modules on the track, connected using a special mechanism. According to reports, the design of the connecting node allows the conveyors to change the relative position of the modules in all three planes. Because of this, all-terrain vehicles have a higher throughput than tracked vehicles with a classic undercarriage. 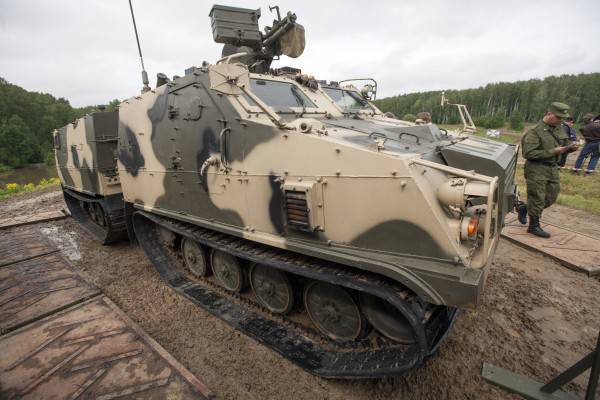 Both machines of the project “Ice ax” have a similar layout and design. They are distinguished only by the presence of armor protection on DT-3PB and the corresponding difference in weight and ride quality. The front link of the new articulated all-terrain vehicles is an energy module in which the power plant is located. According to information published by Vestnik of Mordovia, the civilian version of the car shown in Bronnitsy is equipped with a YMZ 238B diesel engine with horsepower 300 power produced at the Yaroslavl Engine-Building Plant. In addition to the engine and transmission in the front link, a crew cabin is installed with six seats.

The second link is the active platform and can serve as a base for any necessary module. At a copy of the DT-3PB conveyor shown in the 3 Central Research Institute of the Ministry of Defense, a box-type structure was installed, which was probably a cargo or passenger module. In fact, in its place can be mounted any of the proposed units, depending on the wishes of the customer and tactical needs. For example, you can install a passenger cabin on 4 seats, a cargo body, a tank car or a module for the transport of long loads on a civilian all-terrain vehicle DT-18P. Armored DT-3PB capable of carrying up to three tons of payload, DT-4P - a ton more.

Exact data on the DT-3PB armored vehicle for the armed forces are not yet available, but the Herald of Mordovia cited some figures regarding the DT-4П civilian transporter. So, the equipped machine of this model weighs about ten tons, seven of which fall on the front energy module. The own weight of the rear link is more than two times less. At the request of the customer, a civilian vehicle can be equipped with one of three types of tracks: a caterpillar with a rubber-metal hinge, a belt with rubber-fabric elements or cast with an open hinge. The specific pressure of the wide tracks on the ground does not exceed 0,2 kg / sq. Cm. 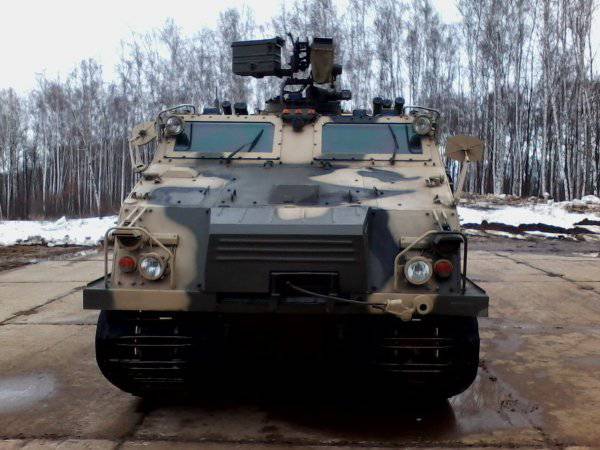 The engine, transmission and undercarriage allow the DT-4P all-terrain vehicle to accelerate to 55 kilometers per hour. Reverse speed - 10 km / h. The conveyor has the ability to cross water obstacles by swimming at a speed of about 5-6 km / h. One refueling is enough to overcome the distance to 500 kilometers. Characteristics of the DT-3PB transporter have not yet been announced, so for the time being it is possible to evaluate the project solely on the basis of its civilian version.

In addition to the bulletproof booking (protection class was not announced), the army transporter DT-3PB in the event of a collision with the enemy can carry weapons. On the roof of the front link there is a turret for a machine gun. According to reports, it is equipped with a remote control system. Judging by the photographs from Bronnitsy, the turret is designed for heavy machine guns, such as the Kord. Perhaps, at the request of the customer, the Rubtsovsk Machine-Building Plant can equip its all-terrain vehicles with other types of turrets for weapons other models. Also on the roof of the front module there are two triple-barreled smoke grenade launchers.

It is worth noting that the Lororub project vehicles are not the first domestic transporters of an articulated circuit. Earlier, the Ishimbay transport engineering plant created two basic machines and several modifications of them under the common name “Vityaz”. The equipment of this family has a load capacity from 3 to 30 tons and is actively used in those areas where transport vehicles with good maneuverability are required. The new DT-3PB and DT-4P conveyors are similar to Vityazi in a number of technical solutions and therefore may have great prospects.

Immediately after the appearance of messages about the machines of the Rubtsovsk plant, the public interested in this topic remembered a similar Swedish design. Armored transporter BvS 10, created in the first half of the two thousandth by Land Systems Hagglunds (a division of BAE Systems), entered service with the armies of several countries in the middle of the same decade. Since then, these machines have been actively exploited in various conditions, including in Afghanistan. On the basis of the BvS 10 all-terrain vehicle, an armored personnel carrier, command and staff, ambulance and repair and recovery vehicle were created. Despite a number of features (lack of mine protection, complexity of the connecting mechanism, etc.), the BvS 10 armored vehicles earned a generally positive assessment.

Prospects for a new domestic project of tracked articulated all-terrain vehicles remain the subject of controversy. Most likely, the Ministry of Defense will be interested in “Ice axes” and will order a certain amount of such equipment. Already now, based only on the available information, it is possible to talk about what tasks army DT-3PB and civil DT-4P will perform. Low ground pressure and, as a result, high throughput, will help these machines work on soft surfaces, for example, on deep snow, on sand or on marshland. At the same time, new transporters are likely to first go to serve in the northern regions of the country. Last summer, information appeared that it was DT-3PB or DT-4P that would become the basis for the new unified articulated tracked platform “Arktika” intended for operation in the North.

However, over the past few more News about the program "Arctic", which leave a lot of questions. For this reason, at the moment it is difficult to talk about the relationship of the Ledorub project to the Arctic Ministry of Defense program. Nevertheless, there is evidence of the existence of several prototypes of the DT-3PB and DT-4P machines, which are being tested, including in the conditions of the Arctic. If the overcoming of the northern routes is successful, then both cars have a great future: thanks to the combination of its characteristics, the Ledorub project has good prospects and should interest the military and border guards, as well as some commercial structures.