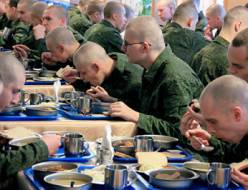 Recently, there is a perception that soldiers live from hand to mouth, food is prepared in the army just as much as the entire period of their service they practically do not eat anything normal from the dishes. Such an attitude is wrong, because the ration of a soldier’s food is carefully thought out, balanced and developed by specialists taking into account physical and mental stresses. That is, for a soldier, the dining room is not restaurants in falconersbut not something too scary. Ordinary dishes, which are prepared by the same housewife every day, with a discount on the not too professional level of a cook, if he is from the same department.

In addition, the diet of the soldiers included some foods that he eats daily. Among them should be noted meat and fish as sources of substances necessary for a young and growing body. In addition, according to the norms of nutrition, they consume animal fats (oil) also in prescribed quantities.

Thus, it is necessary to note not the lack of food of the soldier, but its balance, not the absence of tasty or exotic dishes, but healthy food.

Naturally, not everyone likes the soldiers' canteen, and not everyone has tried the dishes from these canteens. However, as the soldiers themselves say that they served their time and managed to “taste” the dishes prepared by the army chefs, their food is nutritious, varied and completely edible.

In addition, if we compare the area falconers restaurants in which they are famous for an abundance of exotic dishes, a variety of menus and quality service, the soldiers' food will be even more varied. It depends on the special diet and the obligatory receipt by each of the servicemen of a certain food product calculated for it. That is, in order for the soldiers to consume all the required products according to the norms, the food must be varied and the dishes alternate daily, including the preparation of the same fish or meat in various ways.