31 May 2013
37
It is generally accepted that the Vietnam War ended April 30 1975. When the North Vietnamese T-54 kicked out the gates of the presidential palace in Saigon, symbolizing the fall of South Vietnam and the defeat of the United States in this conflict.


Shortly before this, the South Vietnamese air force, thanks to American assistance, reached the 4 position in the world in terms of numbers. Yielding only: USA, USSR and China. However, this only prolonged the agony through the corrupt Saigon regime. 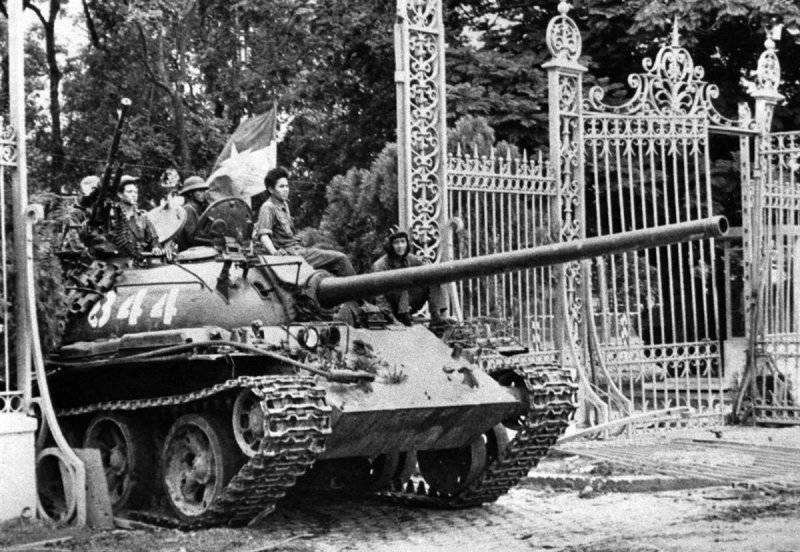 The North Vietnamese military got a large fleet of captured aircraft. Subsequently, F-5 fighters, A-37 attack aircraft and UH-1 helicopters were used by the Vietnamese armed forces until the end of the 80's. 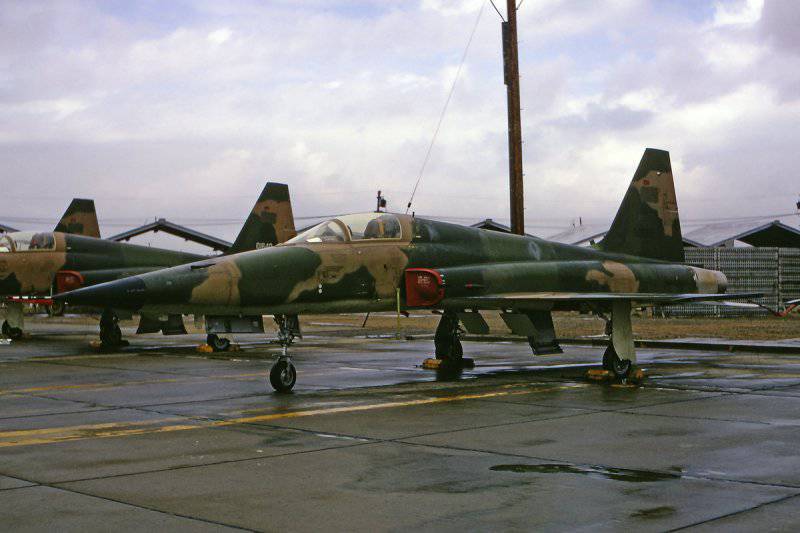 At the airbase Tansonnat focused trophies - the remains of the Air Force in South Vietnam, are in good technical condition: 23 attack aircraft A-37, 41 fighter F-5, 50 helicopters UH-1, five stormtroopers AD-6, five helicopters CH-47, and five aircraft U-6A. In addition, 15 airplanes remained under question: U-17, 41 L-19, 28 C-7, 36 C-119, 18 T-41, 21 C-47, seven C-130, seven DC- 3, five DC-4 and two DC-6.
During the conduct of hostilities, Soviet military experts repeatedly had the opportunity to familiarize themselves with the most diverse American equipment. So in the USSR were sent: F-111 bomber cockpit, engines from A-4, A-6, F-105 and F-4, radar from F-4, Spulrow missiles. But after the end of the war, there was an opportunity to get acquainted with samples of aircraft that are in flight condition.
In Da Nang, where samples of interest to the Soviet side were transferred, our specialists were given the task of monitoring the technical condition of captured aircraft in the USSR, then preparing it for transportation by sea and loading it onto a dry cargo ship. What types of aircraft and in what configuration will be transferred, decided by the military attache with the officers of the General Staff who arrived at the airbase. Initially, one of the F-5 fighters was to be selected.
Three Vietnamese cars demonstrated in the air: they raised a pair of MiG-21, and then
alternately took off, made a circle and landed F-5, piloted by former South Vietnamese pilots. Making sure that the aircraft are in flying condition, they began a detailed inspection. 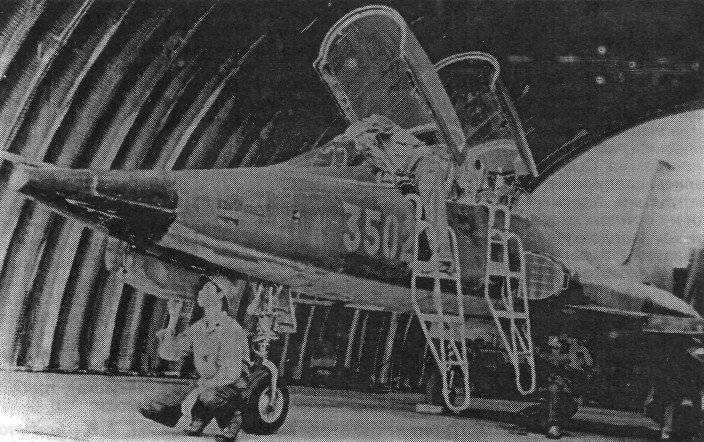 The equipment was alternately driven into a well-equipped hangar, where it was thoroughly examined for several days. The first F-5 was rejected: the oil radiator leaked and the connected radio did not work. We chose the next one, which turned out to be in absolutely good condition. This aircraft was sealed to eliminate equipment replacement.
The F-5 made a very good impression, differing favorably from the MiG-21. The overall dimensions of the equipment were significantly better. For example, the generator in 2-3 is smaller than ours. Very tiny and convenient disposable accumulators were used. The manufacturability of the service is ideal: the plane was so easy to operate that our specialists practically did not use technical documentation. For refueling the hydraulic system, a special self-propelled diesel truck was used. Starting engines - air, using a truck equipped with PGD. The composition of the equipment of the cockpit is similar to the MiG-21, but the devices are smaller, many of them with tape indicators. The toggle stations of the gas station turned out to be rubberized, which was unusual then. 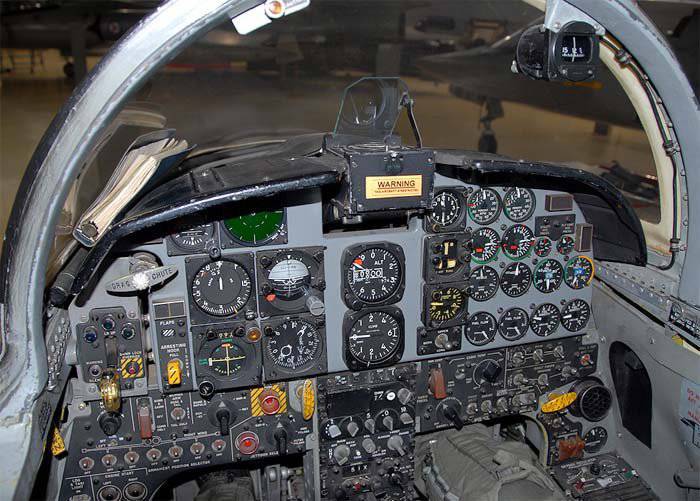 The color of the cockpit is soft turquoise in color (the cockpit of the MiG-23 was later painted in this but sharper color).
Together with the fighter they received a significant number of spare parts and an almost complete set of technical documentation. No flight manuals for the F-5 have passed through our hands. Documentation was made available, and a competent specialist could easily master the operation of this machine. In addition, the Vietnamese transferred a lot of ground equipment: a complete set required for servicing one aircraft, a complete set (including test equipment) for four aircraft and something from the set for 10 aircraft.

The tactical fighter F-5E Tiger II is designed to conduct air combat, attack land targets and reconnaissance. In the middle of 1950's. Northrop, on its own initiative, began designing a lightweight fighter. As a result, the T-38 "Talon" training aircraft appeared for the US Air Force, and then a variant of the experienced single-seat fighter N-156F, the first flight of which took place on July 30 1959.
The aircraft had a light glider, modern aerodynamic forms, equipped with two small turbojet engines. In the production of the aircraft went under the designation F-5A Freedom Fighter, but the first began to operate a double training version of the F-5B.
The upgraded version was equipped with two General Electric TRDs J85-GE-21, the power of which was 23% more than the version of F-5A.
The reconnaissance version of the RF-5A was obtained by installing four cameras in the forward fuselage. The F-5A and RF-5A aircraft were widely used during the Vietnam War.
In November, 1970. It was decided to start the production of a new version under the designation F-5E Tiger II. The first serial F-5E Tiger II took off 11 August 1972.
From the previous version, the F-5E was distinguished by improved maneuverability and higher take-off and landing characteristics (which made it possible to use the aircraft with short runways), increased fuel reserves and an integrated fire control system.
The double training version of the F-5F based on the F-5E had an elongated fuselage, but retained the unified fire control system, so it could be used as a combat one. 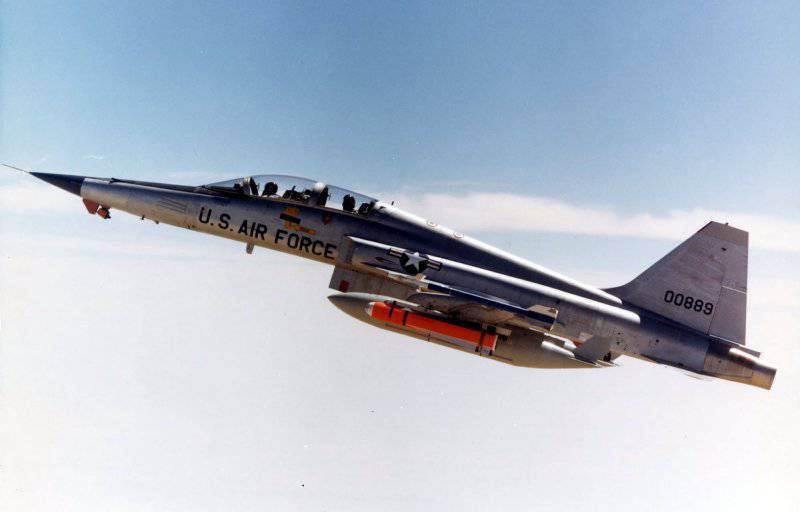 On the initiative of the Chief of the Air Force Scientific Research Institute, General I.D. Gaydayenko, supported by the Deputy Air Force Commander-in-Chief for armament M.N. Mishuk, they conducted comparative tests and training battles with domestic MiG-21bis and MiG-23ML fighters. The test pilot of the Scientific Research Institute of the Air Force N.I. Stogov, V.N. Kondaurov, A.S. Beige 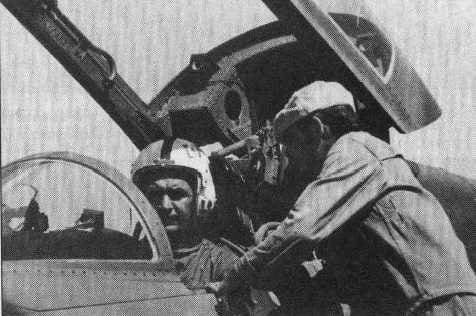 The technical staff who prepared the elegant American aircraft for flight, he remembered the simplicity and thoughtfulness of the design, ease of access to the serviced units. One of the participants in the study of the American aircraft, the leading engineer of the Scientific Research Institute of the Air Force A. Marchenko, recalling, noted the dignity of the fighter as a non-glare dashboard: high-quality illuminated instrument glasses in any light did not create problems with reading information. Engineers at the Institute of the Air Force have long puzzled over the appointment of a button at the bottom of a deep niche in the cabin. As it turned out, it was intended to unlock the application. weapons with chassis released. 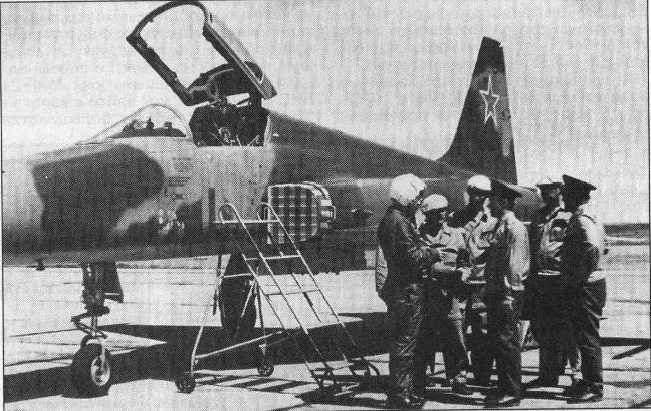 The pilots appreciated the comfort of the cabin, a good overview of it, the rational placement of instruments and controls, easy take-off and excellent maneuverability at high subsonic speeds. F-5E flew in Vladimirovka about a year, until one of the chassis tires collapsed. After testing at the Air Force Institute, the aircraft was handed over to TsAGI for conducting static tests, and many of its components and assemblies were taken to the aircraft design bureaus, where interesting technical solutions from Northrop were used in the development of domestic machines. In addition to the Soviet specialists, Polish engineers met with the American fighter, in 1977, they received from Vietnam a plane with the serial number 73-00852, intended to assess the possibility of rearming Soviet guns HP-23. This offer is not implemented. Third F-5E serial number
73-00878, brought in two boxes from the Czechoslovak training aircraft L-39 "Albatross" to the Prague Museum aviation and astronautics in 1981, where he is to this day. 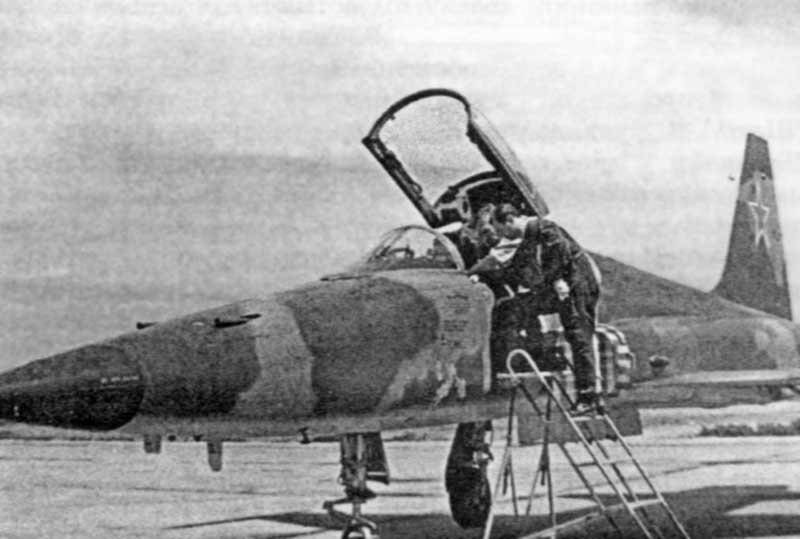 F-5 during tests in the USSR, the airfield "Vladimirovka"

One copy of the light attack aircraft A-37 and the necessary spare parts and technical documentation were also carefully selected. The plane is even simpler than the F-5. Particularly impressive was the location of the pilots nearby. The cabin is compact, but comfortable, the composition of the equipment resembles a helicopter. Working with this machine was just as pleasant as the previous one. 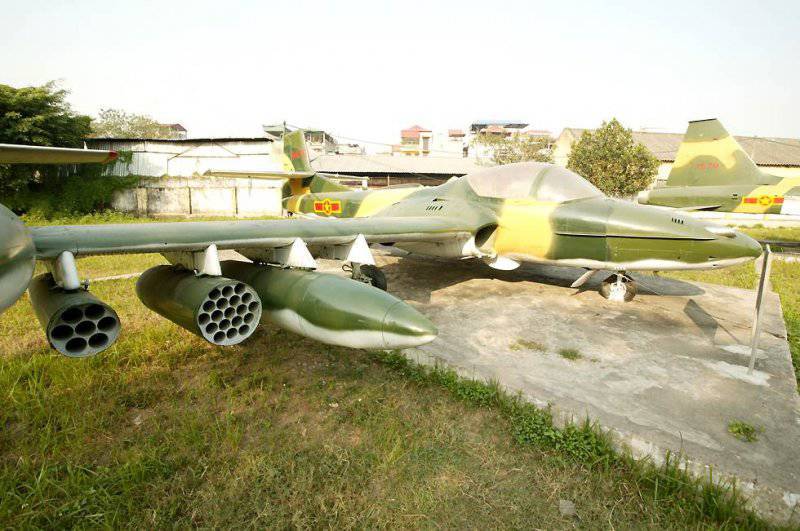 Trophy A-37, in the DRV Aviation Museum

In the spring of 1976, one of the A-37В aircraft captured in Vietnam was brought in for study in the USSR. Initially, it was demonstrated to all interested specialists in the hangar of the Air Force Scientific Research Institute at the Chkalovskaya airbase, and then transferred to Akhtubinsk, where Dragonflay flight tests were conducted (led by the leading engineer of the Air Force Scientific Research Institute, VM Chumbarov). In general, the American attack aircraft received a rather high appreciation of Soviet specialists. The convenience of maintaining the aircraft, a well-developed combat survivability system, devices protecting the engine from foreign objects were noted. In December 1976, flight tests А-37В were completed and the aircraft was transferred to the P.O. Sukhoi, where at that time there were works on the T8 attack aircraft (Su-25).

For the F-5 and A-37, the Vietnamese also donated two additional engines, which were packed in special sealed containers filled with inert gas. This method of storage excluded harmful climatic influences and did not require re-activation before installing the engine on the aircraft.

It was also given the "ganship" AS-119 - the average military transport aircraft with a powerful infantry weapon system installed in the cargo cabin for operations on ground targets.
Transportation by sea LA of such dimensions is fraught with certain difficulties.
For unclear reasons, they did not want to overtake him, although the car was in a flying state. Having received the corresponding task, our representatives got acquainted with the AC-119 in detail and reported that the plane itself was clearly outdated and was not of interest, only its special equipment deserves attention. Then came the command of the car in the Union not to transport, and dismantle and send a set of weapons.

From the helicopters available at the airbase, two were selected: CH-47 Chinook in the landing variant and UH-1 Iroquois in the transport combat.
Compared to our combat Mi-8, the American Iroquois looked clearly preferable. The machine is much smaller, but much better equipped for conducting combat operations: two six-barreled machine guns mounted in the openings of the cargo compartment, a grenade launcher and guided missiles on the beams. Cockpit bottom and side armored. 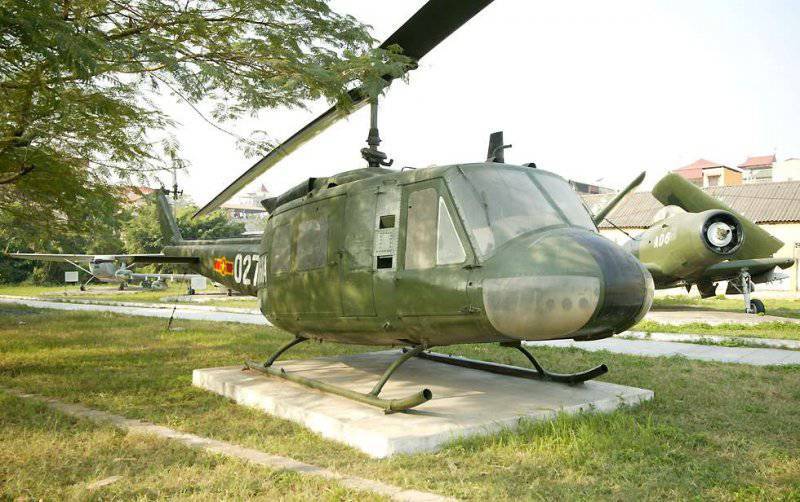 The information obtained after acquaintance with modern at the time of American technology, were used to create countermeasures. And some nodes and technical solutions are directly copied and used to create new aircraft in the USSR.

Ctrl Enter
Noticed oshЫbku Highlight text and press. Ctrl + Enter
We are
Bringing death. The best attack aircraft in aviation historyAn-12 in Afghanistan
37 comments
Information
Dear reader, to leave comments on the publication, you must to register.