American "heroes" in the sky of Yugoslavia 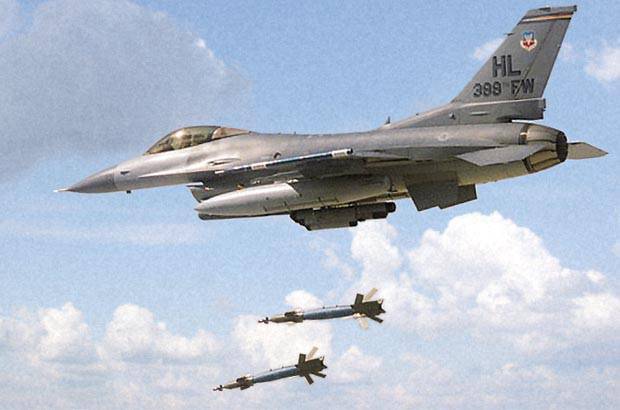 
Shortly before that, the US Air Force pilot Scott O'Grady of the 555 th Fighter Squadron flew the next flight over northern Bosnia on his F-16C, patrolling the restricted area for Yugoslav aircraft. Suddenly, an anti-aircraft missile exploded beneath the fighter, crashing the plane apart. However, the American pilot remained intact and catapulted over Bosnian territory.

The lead team saw the destruction of one of its aircraft, but the command of NATO initially knew nothing about the fate of O'Grady. The next day, the Serbian military officials told Western officials that the shot down pilot was with them.

One of the July days, we, five Russian volunteers, traveled by car to the city of Pale. At one of the posts of the military police, they learned that a shot down American pilot was in the trailer near the Yugoslavs.

The pilot sat at the table and with appetite absorbed the contents of the army pot. His overalls were covered in mud and swamp mud, his face was bitten by mosquitoes and was very swollen. Seeing us, the American quit eating and, turning to us, quickly started talking about something. One of our guys spoke English fairly well. It turns out that the pilot was trying to explain the reasons for his being here. He told about the circumstances in which he was shot down by Yugoslav air defense weapons. Having ejected from a collapsing plane, the pilot descended by parachute into the swamp and ... nearly drowned in the quagmire. Luck finally turned away when hordes of mosquitoes attacked him at night. Then it started to rain, and he was very cold.

Why, having matches in his pocket, he did not make a fire, we did not understand. To top it all off, the American managed to tuck up his leg. After wandering through the forest, the downed pilot finally stepped onto the road and, seeing the first car passing by, raised his hands and gave up.

Now the pilot confusedly and quickly talked about how he loved the Serbs and the Slavs in general. According to him: the United States is waging an unjust war, and therefore he did not want to fight, but he was forced. “Clinton is a fascist! Shouted the American. “He sent me to bomb me!”

After some time, a car approached the military police car, to take the pilot to headquarters. “It's time!” Said the senior post. All together stood up. One of the Serbs straightened the belt of the machine gun that slid off his shoulder and pushed the American towards the exit.

Yankee understood these movements in his own way. Apparently deciding that now he will be brought to execution, he issued a heart-rending cry. Fell to the floor, sobbing, wrapped his arms around the Serb. He read something about his children and his wife, tried to kiss the shoes, as it seemed to him, of his future "executioner". The Serbs did everything to reassure the American, but in vain. The pilot began a real tantrum. It all ended with the Serbs losing their patience. Grabbing the soldier, limp with horror, by the legs, they dragged him outside and threw them into the car.

A week later, we learned that the Serbs returned the pilot to the Americans.

Some more time has passed. The episode of the meeting with the downed pilot began to be forgotten, when suddenly ... turning on the TV in the evening, they saw an old acquaintance on the screen. How he was now! The new dress uniform, eagle look, courageous facial expression, proud posture.

In the White House, Clinton handed the order to the air ace, and voice-over called him a real hero and example for all of America.

After the award ceremony, our “hero” gave interviews to numerous journalists: he described in detail how vile Serbs shot him down. From his narrative it was possible to understand how skillfully he left from persecution. Hiding in the forest, he knocked the dogs off the trail, using various Indian tricks, which he had learned in childhood, in the scout squad. All this time he did not turn off the radio beacon. According to him, on the third day the Serbs still overtook him, but then the helicopters arrived with the American marines ...

Summing up under his monologue, the hero of America declared: "The Serbs are primitive savages and barbarians." Based on this conclusion, he urged the US President not to stand on ceremony with those "who stand in the way of world civilization ..."

I watched and listened. He recalled how quite recently this “hero” was crawling at the feet of the “barbarians” and kissing his boots. Yes, it is clear that it became tough in America with real ones - simple, modest and, most importantly, not “fake” - heroes. 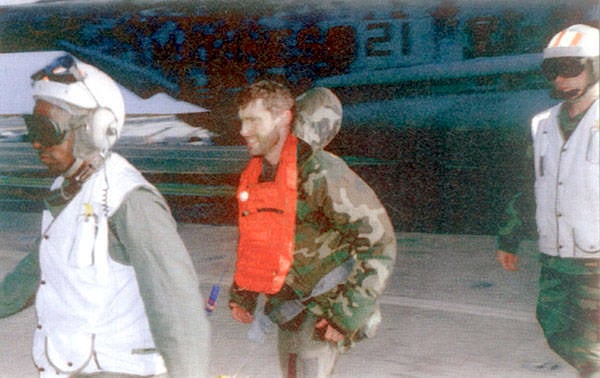 Photo from the archive of Sergeant of the US Marine Corps Dave Garten, published in a number of Western publications. If you believe the captions under the picture, then: "US Air Force captain Scott O'Grady ... saved the American marines from starvation, dehydration, hypothermia, and Serbian shells and bullets."

Ctrl Enter
Noticed oshЫbku Highlight text and press. Ctrl + Enter
We are
History of the Air Force and Air Defense of Yugoslavia. Part of 9. Wars in the ruins. Bosnia and Herzegovina. Part of 1NATO losses in Yugoslavia
Military Reviewin Yandex News
Military Reviewin Google News
51 comment
Information
Dear reader, to leave comments on the publication, you must sign in.