The first clashes of former allies

31 May 2013
26
War we begin! But it is necessary to create a pretext for an attack so that it has a valid reason ...
General W. Roberts, Senior US Military Advisor to South Korea

At the end of 1940's Korea, divided by the 38 parallel to the “zones of influence” of the USSR and the USA, “balanced on the edge of a foul”. In June, 1949 Seoul planned to deploy active hostilities against Pyongyang, for which the concentration of South Korean troops began along the demarcation line (in 1949, there were about 30 thousand people). Not only intelligence officers, but other facts also spoke about the intentions of Seoul - a large number of sabotage operations undertaken by South Koreans in the 38 area parallels, tough militaristic statements by President Lee Seung Ma-na about being ready to hit the communists, etc. Why aren't these plans were implemented by Seoul, remains a mystery.

The same goal - to unite Korea by force, set before him and the head of the pro-communist government of North Korea, Kim Il Sung. However, he was more determined. His plan, developed at the beginning of 1950, envisaged the occupation of Seoul in just three days. It was assumed that after his capture, Lee Seung Man capitulates. At the end of the entire "lightning" campaign was given only a month. They did not care about reserves, counting on a popular uprising in the South and support for partisan detachments in the rear of the South Korean troops. True, unlike Lee Seung Man, who openly called for an invasion of the North, the DPRK leader concealed his intentions. So wars here were equally thirsty both in the North and in the South.

25 June 1950 The “northerners” unexpectedly for the “southerners” crossed the demarcation line and deployed battles with the use of all types weapons. On this day, the world could witness the appearance of new Hiroshima, since the US Air Force command in South Korea received an order to prepare for the use of nuclear weapons, but its use could have caused the mass transfer of Russian troops in Poland, Hungary and Germany to a general offensive, which would have caused world war.

It is not hard to guess that the USSR and China were on the side of North Korea, while South Korea enjoyed the protection of the United States. It was in the Korean War that China for the first time declared itself as a key link in the area and a geopolitical player on a global scale.

Contrary to the prevailing image of I. Stalin as a person located to exclusively forceful methods of solving international problems, he was initially categorically against the invasion of North Koreans in the south of the peninsula. When Kim Il Sung arrived at 1948 with such a plan, Stalin refused to approve it, believing that the North Korean army was too weak for such an operation, and the advance of the southerners was unlikely. Therefore, on that visit, Kim Il Sung received "good" only for a counterattack if an attack from the "southerners" followed.

However, he did not abandon hopes to convince the USSR of the feasibility of this plan and during the 1949 he met three times with the Chinese leader Mao Zedong. Tom liked the idea, but, busy with his own problems - fighting with Chai Kai-shek, Mao offered to suffer a little.

In directives to the Soviet ambassador in Pyongyang, sent in September 1949, Moscow categorically opposes any military actions of the North against the South. According to the Soviet leadership, this would inevitably entail the entry of the United States into the war under the UN flag, the permanent occupation of the South by them and the perpetuation of the section of the peninsula. As subsequent events showed, Moscow’s forecast turned out to be absolutely accurate. In addition, in the fall of 1949, the USSR eliminated its naval base and military commandant's offices in North Korea.

But after only a month of 4 in view of the “changed international situation”, I. Stalin suddenly gave “good” to the plan developed by Kim Il Sung if agreed with China. It is hard to say why such a change in positions occurred. Perhaps this was due to the presence of a nuclear bomb in the USSR (successful tests of which were held in the USSR in August 1949), as well as the defeat of Chiang Kai-shek in the fight against Mao Zedong. But the Soviet leader categorically refused to send his troops into North Korea, limiting himself to the supply of the Korean-Chinese army and continuing to keep the lion’s share of the Soviet army in the western direction. 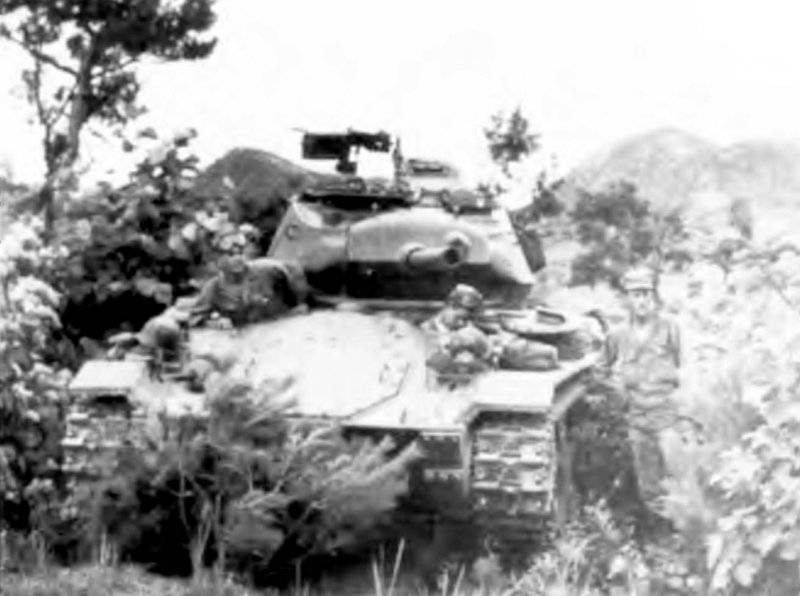 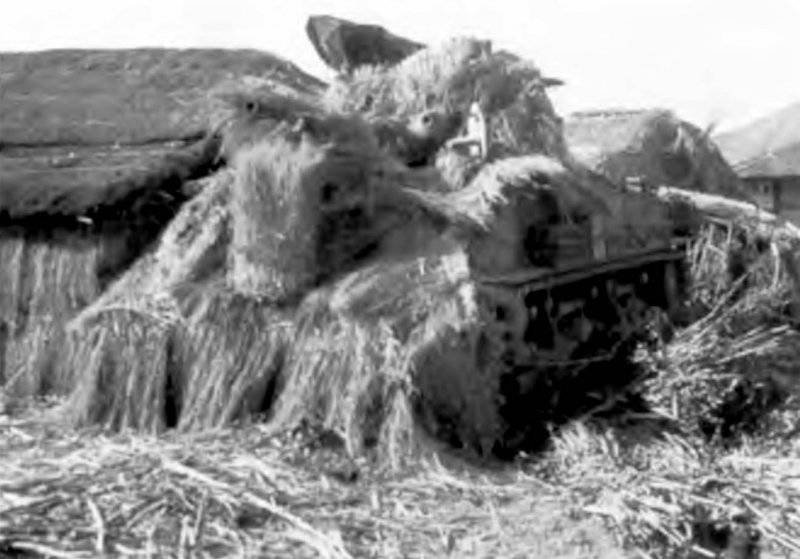 Tank МХNUMXАЗ of the 4 Tank Battalion of the US Marine Corps in ambush. September 1

Perhaps this was due to the fact that April 4 1949 12 countries, including the United States, Britain and France, signed a pact on the creation of a NATO bloc. Each state that joined the bloc assumed the obligation to ensure the security of all members of the bloc by political and military measures. Despite the seemingly defensive doctrine, the anti-Soviet orientation of the bloc was visible to the naked eye, and the Soviet leadership was very concerned about this.

In total, by the end of June 1950 the army of the "northerners" had up to 250 tanks T-34-85. The tank brigades were well trained by Soviet specialists and Korean officers who had experience of war from among the Red Army soldiers. The "South" could not boast of either such weapons or personnel, and therefore on June 25, 1950 it became for Seoul and American advisers about the same as it was on June 22, 1941 for the Soviet Union.

The South Korean army experienced a shortage of not only tanks, but also other weapons. The rout of the border formations and the taking of Seoul on the third day of the fighting were a shock for the Americans. But their reaction was quick. From Japan, where the US 8 units were stationed, tank units equipped with Chaffey M-24, Sherman MN-NXXAZ medium M-4, and the latest M-3 Pershing tanks were deployed by sea. Meanwhile, the US Air Force tried to slow the advance of the Northerners with air strikes.

The downside for the Americans and their allies was the fact that the tanks arrived in relatively small groups - companies that were immediately injected into the battle without training and equipment. This led to large losses of American light and medium tanks.

At the first stage of the battles, the ex-Soviet T-34-85 with Chinese crews caused panic not only in the ranks of the South Korean but also among the Americans. This happened from the lack of combat experience and the low effectiveness of the artillery available. The VET tools initially consisted of 37- and 57-mm guns and light bazookas of the 2,36 caliber of an inch. But the calculations, armed with powerful 3,5-inch bazookas, preferred to retire under the blows of tanks. Things reached the point that during the battles for Daejeon, the commander of the 24 Division, a veteran of World War II, General William Dean, was forced to stand in a trench next to the soldiers and practically show how to act with a bazooka against the tank. 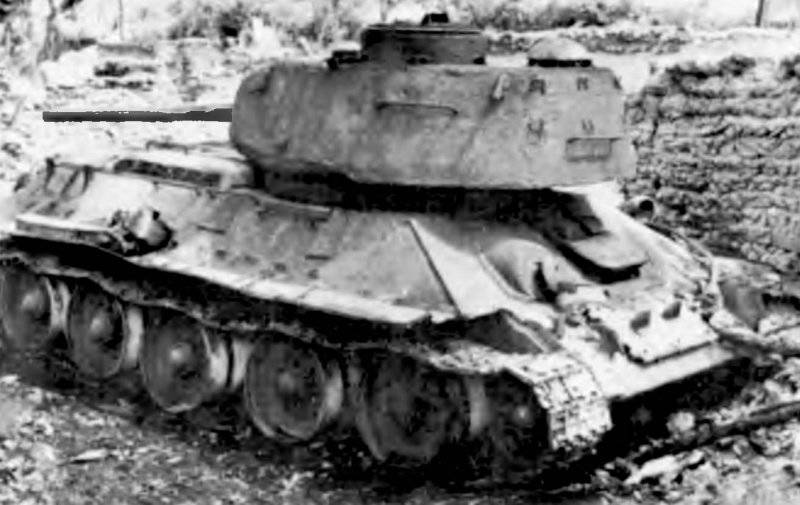 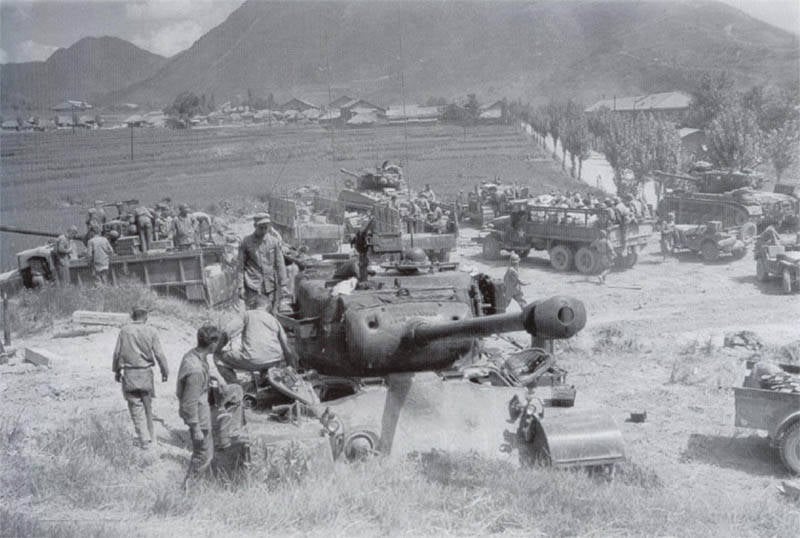 M-26 tanks guard the perimeter of the landing of American troops. 1950

The turning point began in August, when well-trained full-staff combat units landed in Korea with Pershing tanks, such as an expeditionary brigade of more than 6 thousands of people, armed with more than a hundred of their modern tanks. Together with the forces of the American Infantry Division 2 she was able to stop the North Koreans on the southern flank of the front.

Acting under the auspices of the UN (and, quite simply, taking control of the UN in their hands), the Americans organized a powerful counter-attack, landed troops in the rear of the northerners and, with overwhelming superiority in manpower and technology, launched an offensive on Pyongyang. The North Korean army was pressed to the border, and the American command hurried to announce the victorious conclusion of the war. But the USSR and China did not leave their allies. At the end of October 1950, the Chinese "volunteer" grouping crossed the border and dealt a crushing blow to the "UN troops".

The situation on the front changed in just a few hours, when up to 500 thousands of well-equipped and trained Chinese “volunteers” attacked the enemy. About a year after the start of the conflict, the front line stabilized in the 38 parallel, that is, where the war began. Subsequently, right up to the end of the 27 war of July 1953, the opponents conducted military operations mainly along the demarcation line and did not decide on large-scale offensive actions anymore.

The Korean War was the first in which the former allies, the USSR and the USA, clashed head-on and declared their claims to lead in the third world. The joint victory over Hitler, the remnants of the post-war euphoria over the future of Soviet-American relations were henceforth forgotten with overwhelming speed. The Korean War also became a point of reference for the armed confrontation between the two irreconcilable camps - NATO and the social camp (later formed in the ATS). 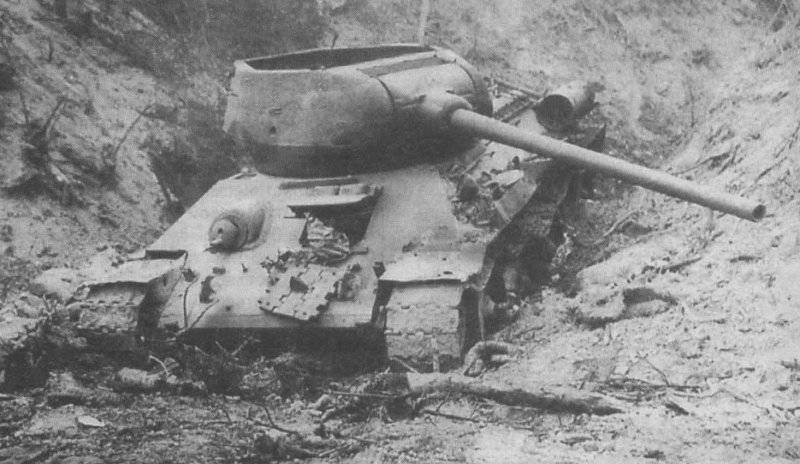 Ctrl Enter
Noticed oshЫbku Highlight text and press. Ctrl + Enter
We are
Don Service Komarich 1646 of the YearSixty Years Since the Beginning of the Korean War
Military Reviewin Yandex News
Military Reviewin Google News
26 comments
Information
Dear reader, to leave comments on the publication, you must sign in.