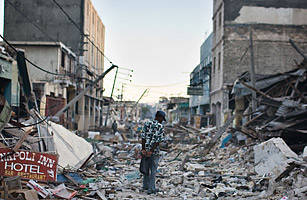 The January 12 earthquake shook the Haitian capital, Port-au-Prince, was not the strongest, but certainly the most devastating. Within a few hours, more than a million people lost their homes. Of the buildings in the city and the surrounding area, only fragments remain. About 230 thousand people died, hundreds of thousands were injured. The international community responded quickly - dozens of countries provided assistance, rescue teams and military personnel arrived to stabilize the situation. But one of the poorest countries in the western hemisphere suffered devastating and extreme losses. Tens of thousands of people are still in the abandoned tent camps, they initially had very little food or none at all. Replete with reports of rape; an epidemic of cholera began, which killed more than 300 people, and now more international assistance is needed. The weak Haitian government is not able to solve this problem on its own - said former President René Préval to a shocked observer - and it is unlikely that the results of the upcoming elections will significantly change the cruel circumstances. 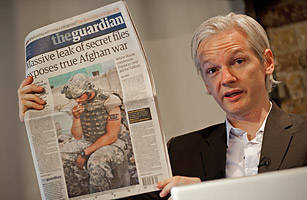 WikiLeaks, an organization that seeks out and publishes important or secret government information, detonated two large bombs: in July, 77 thousands of US military documents describing the campaign in Afghanistan, and a large portion of 400 thousands of military documents from Iraq in October. Both publications have documented previously unknown civilian casualties and cases of abuse. Then the WikiLeaks website actually blew up a nuclear bomb, publishing more than 200 thousands of American diplomatic dispatches in some media outlets in November. Although few discoveries in dispatches were sensational (is there really corruption in Russia?), The leak alarmed technocrats in the world's largest capitals and violated the fundamental issues of the nature of security in the digital 21st century. Also on stage, Julian Assange is a gray-haired WikiLeaks leader with a nasal voice. A former Australian journalist was arrested on December 7 in London for alleged rape in Sweden. His lawyers argue that the charges were fabricated to destroy his reputation. However, Assange still “laughs last”: dozens of new open cables are published daily, forcing some of the most influential people in the world to clumsily apologize and call crisis meetings again and again. 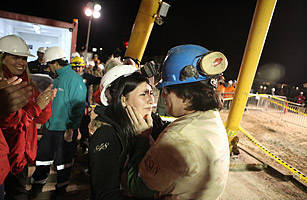 5 August 33 miners were trapped at a depth of 700 meters under the ground as a result of a blockage in the San Jose copper mine in the Atacama Desert. The 69-day underground seat caused by this has become a worldwide tense drama, optimistic history and a soap opera at the same time. Suddenly, the miners turned into national heroes, and grainy photos of them, heaped underground, appeared on the front pages of the media all over the world. Soon the intrigued public of the whole world learned about the well, the rescue capsule and the personal life of the miners (in particular, about their mistresses). The cinematic release of the miners, which was shown on the air, provided a fascinating, better than any imaginary, spectacle: each of the brave souls emerged from the depths of the earth into the arms of touched relatives and a smiling Chilean president. In this story about the miracle of survival, they forgot to mention hundreds of miners who do not have such happiness every year - a few months after the rescue of the Chilean miners, a similar blockage killed the 29 miners in New Zealand. 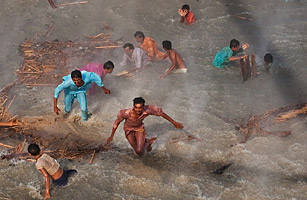 Permeated by extremist militancy, burdened with weak civilian rule and a significant financial crisis, Pakistan has already experienced more than enough problems. And the rainy season in July caused an almost unprecedented flood that flooded the Indus River basin. Instantly almost a fifth of the country was under water. Around 20, millions of Pakistanis were evacuated due to rising water levels; 2 thousands of people died, 10 also killed millions of livestock heads. The damage to the economy, according to some estimates, was 43 billion dollars, was a devastating blow to Pakistan, which was trying to help many homeless and beached. They wrote that in the events involved charitable institutions associated with the fundamentalists. The international community was also not in a hurry to respond to the growth of the disaster - while more than 742 million aid was provided to Haiti during the earthquake, only 45 allocated millions of dollars to Pakistan one month after the rainy season began. 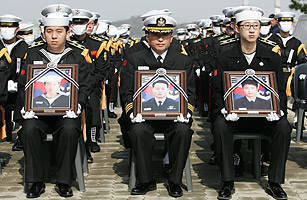 It began in March, when the South Korean corvette “Cheonan” drowned in the waters for which two Koreas are arguing, as a result of which 46 sailors died. An investigation by the South Korean military concluded that the North Korean torpedo hit the ship. This incident led to a year of tensions — the United States and South Korea conducted naval exercises near the hermit kingdom, which in turn outraged China, the only patron of the DPRK. While Washington and Beijing were being redeployed with diplomatic studs, Pyongyang 29 September organized a celebration in honor of the 65 anniversary of the communist party, opening for a moment the door of the foreign press to nominate smooth Kim Jong Yin as the successor to his sick father, Kim Jong Il. After that, the wayward state did what it did best, and shelled the South Korean island 23 in November. Four residents of South Korea were killed, and the peninsula was again mired in geopolitical hostility. 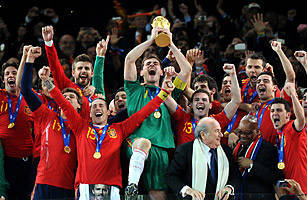 A few months before the summer World Cup in South Africa, international media raised the issue of the ability of the African nation to accept the popular sporting event in the world at the proper level. For the first time the World Cup was held on african the continent, and many problems have arisen: will the new stadium be completed on time? Will the country's infrastructure be able to receive tens of thousands of fans who will arrive in South Africa? Does a country known for its violent crime guarantee security? The start of the game was far from favorable - Nelson Mandela, the main leader of the struggle against apartheid, a former president and an ardent fan of football, refused to take part in the opening ceremony after his great-granddaughter died in a car accident. But, despite several initial failures, the negativity that preceded the championship disappeared as soon as it began. Over the course of four summer weeks, South Africa has become a stage for one of the most successful world championships lately, animated by joyful crowds, vivid performances - in particular, from the initiative Ghanaian side and the Spanish team, which in the end became the champion - and the cause of the evil global debate relatively vuvuzel. On the eve of the finale, Mandela lit up on the sidelines of the field, and the cynics had to shut up - in the end, who will listen to them when an octopus-clairvoyant rules the world?

7. Yemen: A New Front Against Terrorism 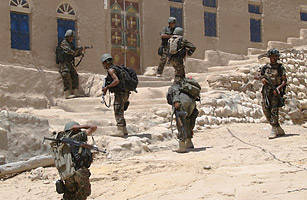 On the eve of Christmas 2009, a potential terrorist failed to blow up a bomb attached to his underwear on board an airplane flying to Detroit. So the world remembered Yemen, one of the poorest and most turbulent countries in the Middle East and an increasingly popular hotbed of fundamentalist militancy, a suspected terrorist, a young Nigerian, had obviously been trained on Yemeni land. Since then, the world has learned about the growth of the power of the Yemeni al-Qaida wing, which is now perhaps even more powerful and tactically stronger than the minions who are located along the Afghanistan-Pakistan border. A recent series of intercepted bombs in wrappers that were sent to American recipients, was sent from Yemen. The most influential person in the country, Ali Abdullah Saleh, reigned for more than two decades, but regardless of the efforts of his government, he did little useful for correcting the countless economic problems of Yemen. Laws in certain parts of Yemen are close to the weak state of Somalia; its rebellious regions and restless tribes would be entirely appropriate in Afghanistan or Iraq. Saleh promised that he would eradicate the terrorists from his midst, but, perhaps doubting his loyalty and capabilities, the CIA launched a hidden war with raids of drones and planned attacks against suspected Al Qaeda activists in the country. 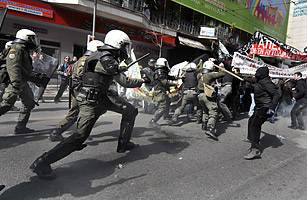 In Europe, there was a summer of discontent. Staggering from the consequences of the Great Recession, the community of economies of the European Union proclaimed frugality as the slogan of the day. After Greece almost suffered bankruptcy in May, tens of thousands of people took to the streets of Athens and other cities to protest the government’s plans to cut spending on the public sector. Many felt punishment for the actions of politicians; Western Europeans grumbled about giving Greece a package of almost 150 billions of dollars. Everywhere in Europe there is a feeling that a long social contract, established after the Second World War, is under threat: several weeks the French cities were paralyzed because of the strikes of both young and old people who were outraged by the plan to increase the retirement age by two years. In October, a new conservative government in London proclaimed a staggering reduction in the budget for 128 billions of dollars - cutting everything from military spending to possible residential projects. People are numb with fear.

9. War of drug cartels in Mexico 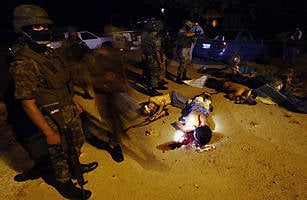 The fight in Mexico against powerful cartels turned into horror in 2010. Alarmed border towns were abused when the leaders of the country's drug business began a war for influence. At this time, the security services were either overwhelmed or intimidated, or even were allied with cartels. In September, the bloodied Ciudad Juarez fired corrupt policemen near 400. In the war with the cartels, there were a few minor victories of President Felipe Calderon: the arrest of a terrifying drug lord nicknamed El Barbie, as well as the seizure of unprecedented 340 tons of marijuana in the border town of Tijuana. However good news overshadowed by the terrible reports of kidnapping, mass graves and night reprisals. Over three thousand people were killed just this year. 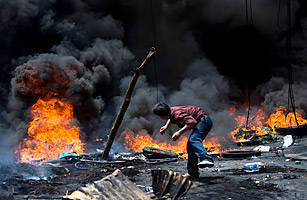 Almost the whole of April and May of this year in the central business district of Bangkok, the capital of Thailand, continued anti-government thousands of demonstrations. Called "red shirts" because of the color of their political movement (their opponents are "yellow shirts"), the activists sought to overthrow the government, which they consider elitist and undemocratic. Their political chairman, former Thai Prime Minister Thaksin Shinawatra, has been living in exile since he was overthrown as a result of the coup of 2006 of the year (in 2008, Thaksin was accused of corruption and sentenced in absentia). Commentators believe that the protests indicate a deep rift in Thai society - between the big city and the countryside, rich and poor, royalists and populists. However, on the streets of Bangkok, the Thai component, a dysfunctional policy, gave way to the purest performance. Red-shirted protesters poured hundreds of liters of their own blood during a disgusting propaganda act. Later, after the continuing paralysis of Bangkok became unacceptable to the government, it applied violence: there were fights on the streets between state forces and demonstrators, some of them were armed with pistols and even several underdeveloped homemade rocket launchers. Owing to the cruel punitive actions and the spraying of the red shirts 91, a man died and more than 1800 were injured. All events were recorded by international media cameras that broadcast events around the clock from the Bangkok front line. Although since then circumstances have subsided, emotions are seething and still. In November, thousands of Red Shirt supporters marched in Bangkok to commemorate those killed six months ago; possible holding of actions and protests in the future.