Pistols of the Hungarian gunsmith Rudolf von Frommer (part I) 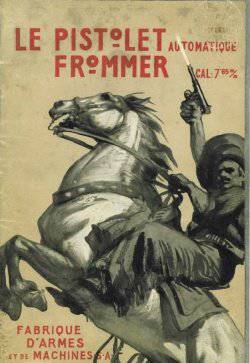 Accidentally found an image of a pistol with an unusual “squiggle” in the lower part of the handle and marked on the casing: “P. Mod 37. Kal 7,65 ”.


It was found out that this gun was in the 1941 - 1945 years in service with the Luftwaffe troops, it was produced in Hungary, at the plant Fémáru Fegyver és Gépgyár Rt, and this product evolved from earlier models of the Hungarian gunsmith Rudolf von Frommer (Rudolf von Frommer)

It turned out that Rudolf Frommer was not a one-day artisan, but rather a prolific and competent gunsmith: he developed a dozen models and modifications weapons, received more 100 patents in more than 20 European countries. 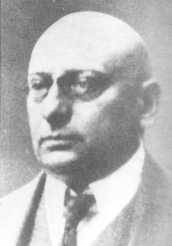 In 1914, the emperor and king Franz Joseph brought him to the Hungarian nobility with the prefix to the surname “fegyverneki”: “squire” (later they began writing this prefix in German: “background”) for merit in the field of creating weapons for the Austro-Hungarian army. . In the same year, the king appointed Rudolph Frommer as director of the arms factory, where he worked in various positions. A year later, in 1918, Mr. Rudolf Frommer became the Hungarian Privy Counselor.
Но обо всем по порядку.

short biography
The future gunsmith, Rudolf von Frommer, was born 4 August 1868, in a locality that eventually became modern Budapest. After graduating from high school, young Rudolph studied at a college of commerce and the stock market, he studied foreign languages ​​in depth: French, English and German. After receiving technical education at the higher polytechnic courses in 1896, he entered the Budapest arms factory. There he worked, occupying various positions, including the post of director of the plant. Rudolf von Frommer passed away in 1935.

Frommer Model 1901
Frommer received his first patent for his own design pistol in the 1901 year, and a small batch was produced in 1903 and sent to the army under the marking Frommer Model 1901 for military tests. He did not like the Austro-Hungarian Armed Forces: after passing a series of tests for use in the army, he was rejected. In the same year 1903, the pistol M 1901 participated in a competition organized by the Swedish armed forces. Frommer's gun surpassed its competitors in many ways, but lost due to the one-piece shop. Competition won the Browning design pistol (M 1903). 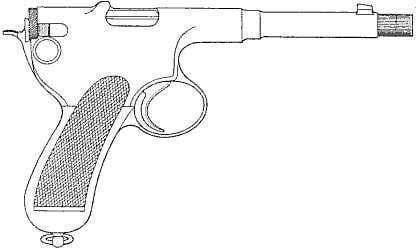 Automatic gun Frommer Model 1901 (base model) with a permanent magazine

Frommer M 1901 was notable for its memorable appearance: a long and thin barrel was placed inside the combined frame with a receiver, and an elongated casing (which was part of the receiver) - guided the course of the barrel during recoil. The muzzle of the barrel protruded from the front of the housing for about an inch of 1. For locking the barrel bore, a bolt with a rotary larva was used, driven by a long stroke of the barrel, and the primer was broken by an open trigger. Permanent 10-charging magazine charging magazine located in the handle and was equipped from above through the open gate: using the clip. 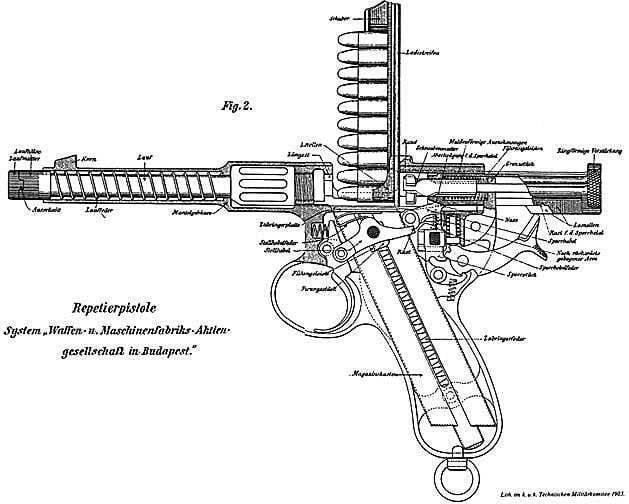 
Frommer Model 1906
Over time, the 1901 M model was refined and was proposed as Frommer Model 1906. The changes made to it were designed primarily to improve the reliability of the weapon and simplify the design. 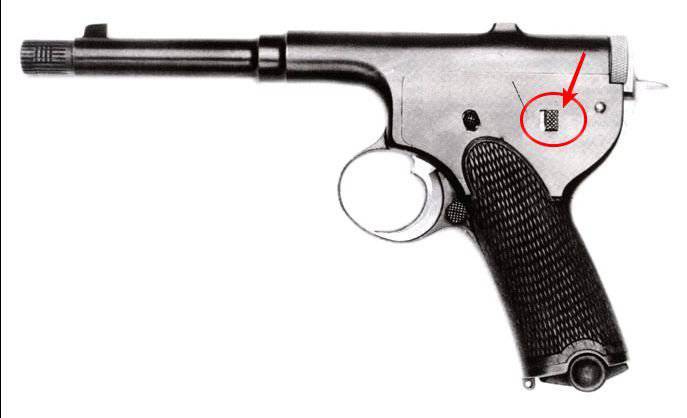 Frommer's 1906 model of the year with an elongated barrel. In addition to the length of the barrel, different surface of the handle. You can not see the serial number or brand of the manufacturer. Quite possibly, this is a pre-production version. The arrow indicates the supposed fuse button.
Automatic pistol still functioned by recoil barrel with a long course. In the early designs, the store was made permanent, like the 1901 model of the year, but pretty soon it was replaced with a box-like interchangeable store. According to its design, it resembled the shop “Parabellum-a” with large wooden “buttons” for fingers in the bottom part and a stiffener on the side surface. 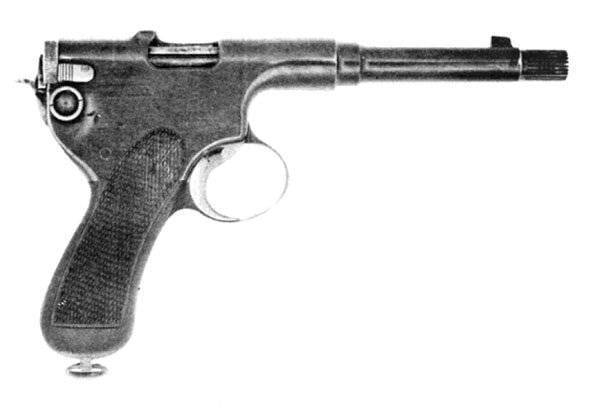 In 1907, the Frommer pistol M 1906 participated in the competition for equipping the Austro-Hungarian empire with the main short-barreled weapon.
Despite the fact that Frommer’s gun was more thoughtful and successful, the selection committee (for political reasons) opted for a Roth-Steyr M1907 pistol.

By 1910, the update package for this model was ready.
An improved version of the M1906 model was called Frommer M1910 Pistol.

Frommer Pistol Model 1910 The Frommer M Pistol 1910 M completed the evolution of the 1901 model of the year and became the most popular of the entire family. The M 1910 differed from the 1906 model of the year with a more “licked” design, was slightly larger and slightly lighter. In addition, Frommer's pistol was equipped with an automatic fuse on the back of the handle, although some batches were produced without it. Most of all M 1910 was prevalent in the Hungarian gendarmerie. 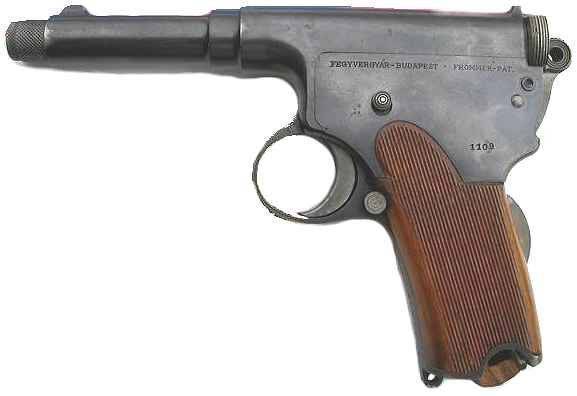 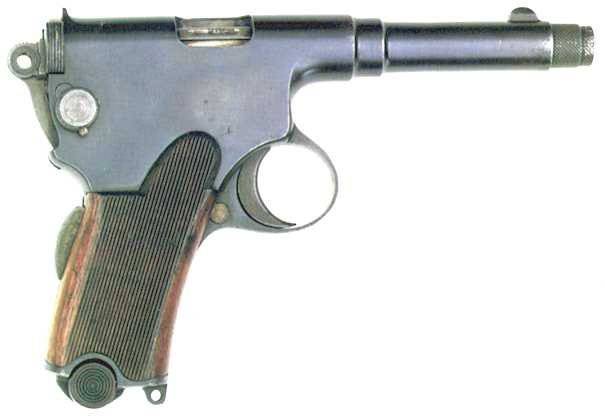 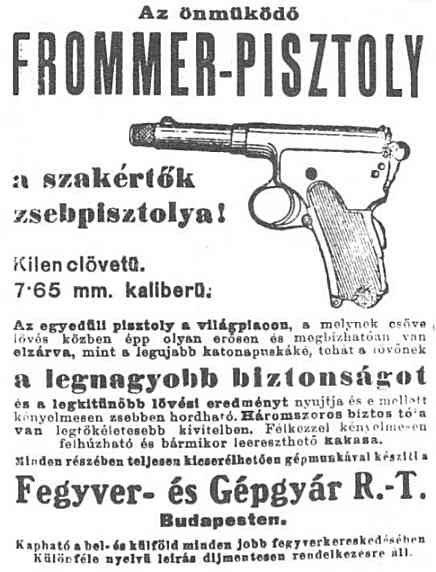 An ad for those years. They promise high accuracy, simplicity and safety in use, as well as excellent quality. 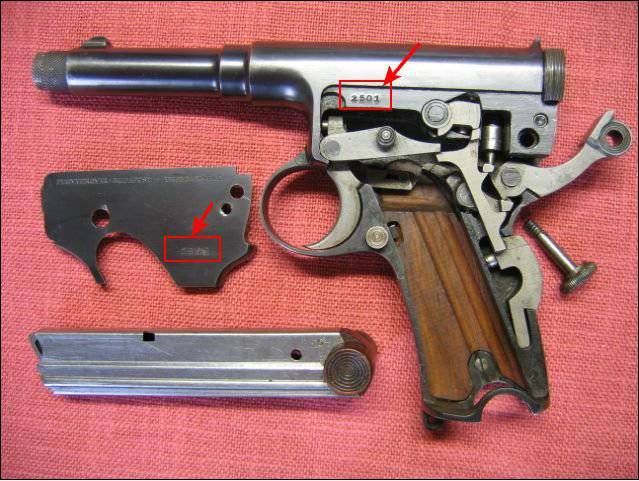 Trigger mechanism M 1910.
The serial number is stamped on the plate and on the housing of the receiver-casing. 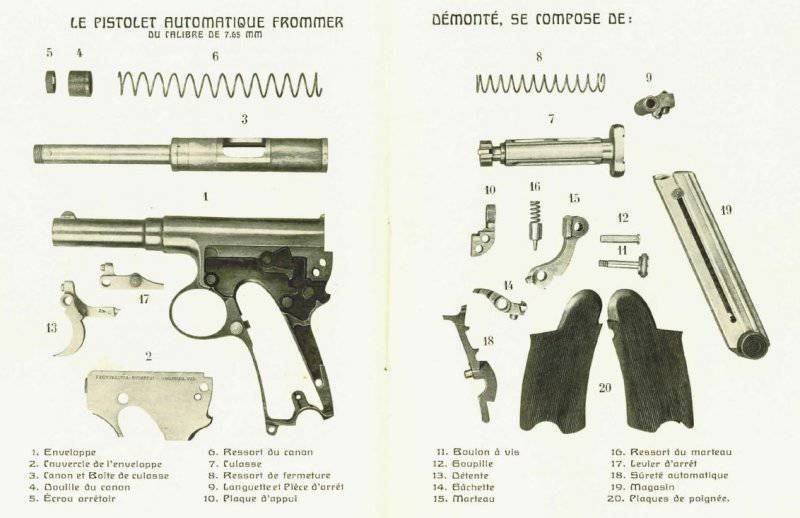