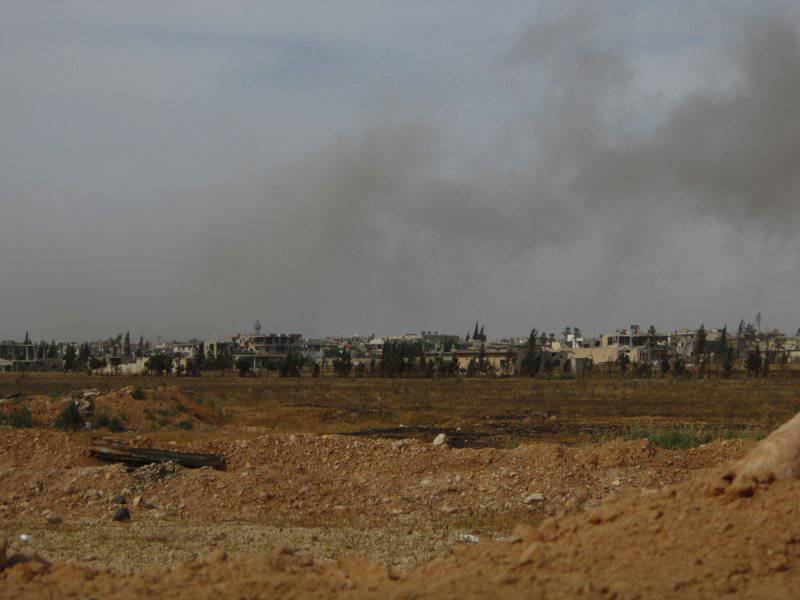 She had only a notebook in her hand ...

These shots are remembered by the Syrians and those who watched the Syrian TV channels. Al-Ihbarii’s correspondent Yara Salekh, freed from captivity along with two members of her film crew, rushes into the arms of her colleague and girlfriend, Yara Abbas. Girls are very happy to meet. Moreover, Yare Saleh in captivity said that her friend was also captured. Then the friendship triumphed over the trials ...

But less than a year ... On May 27, in the area of ​​Al-Dabaa airfield near the city of Al-Kseyr, Yara Abbas was killed. The car in which she was traveling with her colleagues was ambushed by militants. He was riddled with bullets. The girl received a mortal wound, the driver and the operator also suffered. Moreover, it was clear in advance that this was a press machine. Yar was 26 years old.

Terrorists have repeatedly threatened journalists, including girls who have been reporting from the front line. And with regard to Yara Abbas, they fulfilled their black threat. And again it is impossible not to recall that they are trying to present the militants as “freedom fighters” who allegedly “fight against the dictatorship”. But where is she, freedom, if journalists are killed for their patriotic position?

This is a stern oriental female name - Yara ... So consonant with the Russian word "rage." She was a fierce patriot, a real wrestler. Everyone who knew her said that with her bravery she was no less inferior to male soldiers who fought on the front lines with a bunch of terrorists who came from all over the world. The deceased journalist was one of those who were useless to advise "more cautious." She always rushed into the thick of events.

It so happened that shortly before her death, Ankhar Kochneva and a group of Ukrainian journalists saw her in Homs. On Saturday morning, we gathered together in Al-Xayr, but in the end, on the orders of the army, we drove along different roads. I saw a beautiful, pleasant girl with long dark hair who kindly smiled at colleagues from Ukraine, shook hands with them. And on Monday came the tragic message ...

Director of Al-Ikhbariya TV channel Imad Sara told reporters: “Our poor girl, she has nothing in her hand except for a notebook and pen. It was quite obvious that there were unarmed journalists in the car. Tragedy shows that she was killed for her reports, for the truth that she spoke from the screen. ”

Al-Ihbariya is the most militant television channel in Syria, and its employees endured a lot of tests. In June last year, the studio was attacked by terrorists. Then three journalists and three guards were shot in cold blood, and the building, along with all its equipment, was blown up. Then, in August of last year, the film crew of the TV channel, led by Yara Saleh, was abducted in a suburb of Damascus. One of the operators was killed - 60 bullets were fired for refusing to cooperate and a photo of President Bashar Al-Assad on a mobile phone. Now the channel has suffered another irreparable loss.

One cannot fail to say that the death of Yara Abbas did not cause such a reaction in the world as, say, the death in Homs of her French colleague Mary Colvin, who was spoken about by thousands of media outlets, to whose family all the journalistic organizations of the world expressed condolences. Colvin then tried to blame the Syrian army for the death, but then it turned out that the so-called "rebels" had killed her. West chose to "hush up" this history.

As for the family of Yara Abbas, these international journalistic organizations like water in the mouth gathered. And some liberal media almost choked with gloating. Thus, the Russian liberal site “Lenta.ru,” known for its anti-Syrian publications (in which a certain Ivan Yakovina shows particular activity), burst out with the headline: “A government propagandist was killed in Syria.” True, when these words were outraged by all real Russian journalists, who have been to Syria, worked at the front line, not in classrooms, and knew Yara, they replaced the headline with a neutral one. But the sediment remained ...

Many Syrian journalists paid with their lives for telling the truth about this dirty war unleashed against the country, about terrorism that came from different parts of the world to kill, rob and destroy. Their names will remain in immortality along with the fallen defenders of the motherland. Someone with a notebook in hand, and someone with weapons - all of them contribute to the cause of resistance to the new terrible fascism, hiding behind the slogans of democracy.

... At the funeral of Yara Abbas, people brought a huge amount of flowers. She found her last refuge in her native village in the province of Hama. Governors of Homes and Tartus provinces and thousands of ordinary citizens came to bid her farewell to her ...

Senator enters Syria in a gangster

At a time when hired thugs suffer defeats on all fronts, when the Army completes the operation to liberate Al-Xeira, when terrorists were driven away from Damascus — the West and the US are trying to save their armed dummies from final defeat.
Senator John McCain - a war criminal who sprayed poisonous substances over the unarmed people of Vietnam - this time committed a new crime. From the territory of Turkey, he, by his own admission, penetrated into Syria, where he spent about an hour meeting with the leaders of the so-called "rebels".

True, reports about the presence of McCain in Syria are very contradictory. So, the media reported that he "dived into Syrian territory on 800 kilometers," despite the fact that this is physically impossible - the country is small. Therefore, it cannot be excluded that the senator, having visited Turkey, exaggerates his “feats” committed in the name of supporting terrorism.

But if we assume that McCain actually visited the territories of the SAR, captured by terrorists, he violated all the laws and trampled on elementary ethical norms. The US has always said that compliance with the law is of utmost importance to them. In their own country, they are proud of this notorious legality; they consider themselves to be a legal state - a model for imitation.

And suddenly, by no means an ordinary American, but a high-ranking senator, - sneaks into a foreign country, like a despicable night thief. Illegally crosses the border, meets with terrorists, trying to coordinate their actions.

As the so-called “head of the military council of the Syrian Free Army” later stated, a gangster who appropriated the rank of general, Salem Idris, “Senator McCain’s visit to Syria is very important and very useful, especially at this time. We need American help to change the situation on the ground. The situation is extremely critical. ” He added that he expects support from the United States: the delivery of heavy weapons, the creation of a no-fly zone and the launching of air strikes.

One can see a complete moral decay of the so-called “opposition”, which, for the sake of lust for power and profit, wants to bombard its own country. One can see their critical situation - their so-called “people's revolution” is doomed to failure, since it is not supported by citizens. And the pseudo-revolutionaries are not seeking salvation among the people, they are not trying to attract new supporters among the Syrians, as true revolutionaries do. They kneel before external forces and beg for bombs on the heads of ordinary people, whose only fault is that they did not support the “fighters for democracy”.

But moral decay is evident not only among terrorists, but also among high-ranking overseas gentlemen. Truly - for their dirty purposes, American warriors are ready to sacrifice not only their taxpayers' money, not only the political image of their country, more and more throwing off democratic masks - but also elementary honor, turning into ordinary and banal criminals, whose place is in the dirty bucket .

Although, perhaps, McCain should be freed from the deserved punishment and sent to a mental hospital for treatment. You can, in the end, and a little regret the poor man, completely mindset by sitting in the Vietnamese pit.

To support gangsters who are close to accountable for their bloody affairs, seeks not only the outdated old American senator from his mind, but also pseudo-civilized European regimes.

At its meeting, the European Union unanimously extended economic sanctions against Syria - sanctions that civilians suffer from.

The sanctions, which resulted, in particular, in the extreme difficulties of the health sector. Sanctions for which there are no drugs, components for which were not made in Syria. Sanctions, due to which the state of the economy has deteriorated, the government has to make extraordinary efforts, and if there were no social gains in the country, this would have led to mass famine long ago.

But on another issue, the EU countries could not come to a common position - on the issue of lifting the arms embargo. When it was introduced, Western states assumed that the restrictions would affect only the legitimate Syrian government. But then this embargo became a formal obstacle to the arming of the militants of the so-called “opposition”.

France and Britain insisted on lifting the embargo, like card sharks, who suddenly did not like the rules of the game that they had invented. Countries with a more sober stance, in particular, Germany, Belgium, Austria, said that weapons could fall into the hands of extremists. As a result, no general agreement was reached.

British Foreign Affairs Minister William Hague interpreted in his own way the lack of agreement in the EU - they say, this means lifting the embargo. And now it is possible to supply weapons to the insurgents (as though they hadn’t supplied them before!) That is, the lack of a solution is the solution. More sober European politicians have proposed to postpone at least two months with such supplies so that the weapons do not fall into the hands of extremists.

Of course, also naive reasoning - as if a non-extremist opposition in Syria needs weapons. Non-extremist oppositionists are fighting by political means, but how to call those who raised weapons against their country? Would these gentlemen try to apply what was said to their own countries! But Haig claims that he does not intend to wait two months. A European Union spokeswoman, Catherine Ashton (known for her fraternization with the Libyan terrorists in Benghazi), said that every country has the right to independently decide on the arming of militants. As if there is no international law!

Of course, this decision will not have a significant impact (or, more precisely, not a solution, since no agreement was reached) on the situation - the West has already armed and armed the rebels. But the following is obvious: the Europeans, who verbally say that they are in favor of a peaceful settlement of the Syrian crisis, in fact are only trying to pour even more gasoline into the fire.