AGDS / M1: self-propelled anti-aircraft gun based on the Abrams tank

30 May 2013
31
Features of the application of modern frontline aviation and its armaments directly speak of the need to create combined anti-aircraft systems, simultaneously armed with artillery mounts and missile systems, and at the same time capable of moving in line with tanks or other combat vehicles. Thirty years ago, the Soviet Union created such a machine, called the 2K22 Tunguska, carrying two 30 mm anti-aircraft guns and eight guided missiles. Foreign countries quickly became interested in this idea and launched a number of their own projects for a similar purpose. Among others, the United States became interested in the subject of anti-aircraft missile and artillery systems (ZRAK). 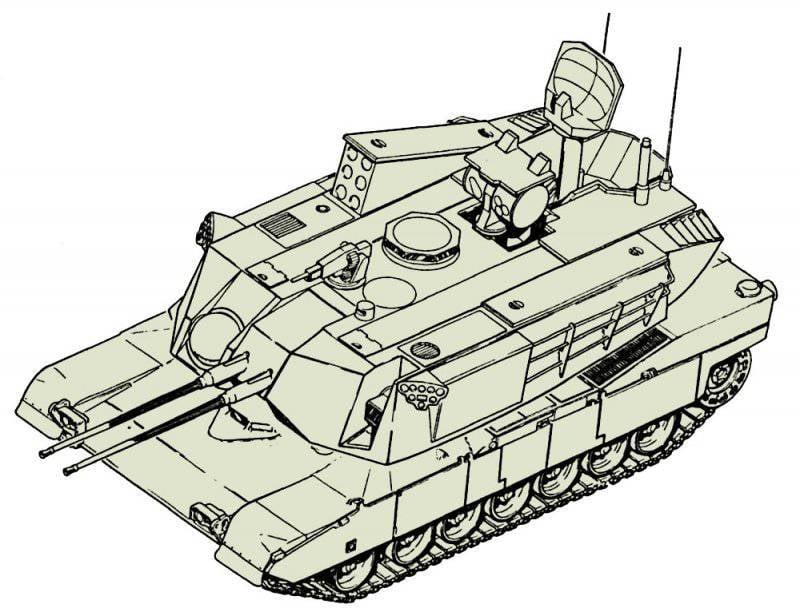 In the early eighties, several American companies began work on creating self-propelled SCRAs capable of escorting troops on the march. So in the United States appeared complexes AN / TWQ-1 Avenger, LAV-AD, etc. However, all these systems had one feature that significantly limited their capabilities. Due to the use of relatively light base chassis, new anti-aircraft missile and artillery systems could not move and work on a par with the M1 Abrams tanks. Required new combat vehicle with the appropriate characteristics. This is how the AGDS / M1 project (Air Ground Defense System - “A system for protecting against air and ground targets based on the M1 tank”), created by WDH, appeared.

The basis for the new anti-aircraft complex took the standard chassis of the tank M1 with a solid armored and powerful power plant. According to the developers, the use of a tank chassis would simplify the design and production, as well as provide ease of operation both in terms of performance and in terms of technical support. As for the combat module AGDS, it was planned to do it on the basis of the tower of the same tank. It is noteworthy that during the design of the anti-aircraft complex the dimensions of the tower increased, but the basic proportions remained the same. This was done both to facilitate production, and for additional disguise: the silhouette of the SCREEN was similar to the silhouette of the base tank.

In front of the seriously modified turret, on the spot where the Abrams had a gun, they installed two Bushmaster III automatic caliber guns of 35 millimeters. The new guns made it possible to conduct aimed fire at a range of up to three kilometers with a rate of fire of up to 200-250 rounds per minute. It was supposed to use shells with a radio fuse. With the explosion of such ammunition formed at least hundreds of fragments. According to the calculations of the designers, the use of Bushmaster-3 guns with special projectiles made it possible to spend no more than two dozen projectiles on the destruction of one aerial target.

Next to the cannons, in front of the turret, the designers of the WDH company provided a volume for stores with ammunition. Each gun was equipped with two stores. An interesting design of the ammunition system. Two large drum shops (one per cannon) with 500 capacity high-explosive fragmentation shells were placed next to the breech parts of the guns. It is noteworthy that the shells were supposed to be placed in stores perpendicular to the axis of the barrel. During the submission to the cannon, a special mechanism had to orient them in the right way. Above the breech of the guns and near the shops for high-explosive fragmentation ammunition, it was proposed to put two smaller tanks on 40-50 shells. They were intended for the storage and supply of armor-piercing shells, in case of a collision of an AGDS / M1 combat vehicle with enemy light armored vehicles. Thus, a new anti-aircraft missile and artillery complex could effectively destroy and destroy a wide range of ground and air targets that tanks encounter in their combat using their barrel weapons.

Directly behind the cannon compartment, the designers provided for a relatively small manned volume. In the front part of it should have been located the workplace of the weapon operator, in the back - the commander. The use of a large number of various electronic equipment led to the fact that only one operator could manage all systems. If necessary, the commander had the opportunity to take on part of the load and facilitate the work of a colleague. On the sides of the front of the habitable volume, it was proposed to install a part of electronic equipment. In particular, in the left "cheekbone" of the tower it was supposed to place the equipment of the optical-location system, the head of which was to be placed in a characteristic vertical slot in the armor. On the right "cheekbone" they found a place for the radar guidance and its antenna, and behind it fit an auxiliary power unit.

Directly behind the fighting compartment and the workplace of the commander of the machine on the AGDS turret should have been the rest of the electronics, including the missile control unit and the radar of the review. A block of equipment for aiming and pointing missiles was carried out retractable inside the turret. Antenna survey radar station in the parking position had to turn back fit into a special niche.

The WDH engineers chose the ADATS universal complex, created a little earlier, as missile weapons for the AGDS / M1 SPRA. To detect targets, this system could use existing radars, as well as a separate optical system with a thermal imaging channel. After launch, the ADATS guided missile was to be guided with a laser beam. The controlled universal missile of the complex with a length of about two meters weighed 51 kilogram and was equipped with a solid-fuel engine. The latter allowed the rocket to accelerate to a speed of about three speeds of sound and hit targets at ranges up to 10 kilometers and at altitudes up to 7 kilometers. The ADATS missile was to carry a fragmentation-cumulative warhead weighing 12,5 kg, suitable for hitting aircraft and armored vehicles. So, on tests, similar missiles pierced an armor sheet with a thickness up to 900 millimeters. 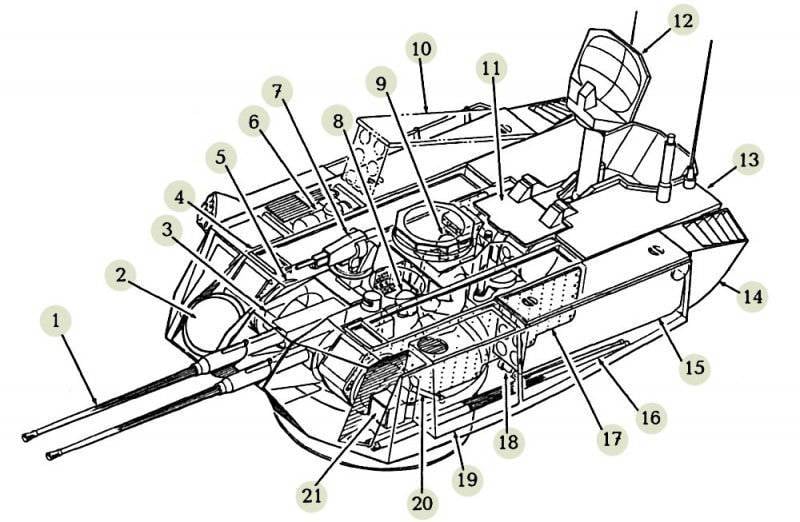 Proceeding from the desire to make the AGDS / M1 MASTER as close as possible to the tank M1 Abrams, and also intending to increase the survivability of the vehicle, the project authors placed missile launchers inside the armored turret. Two modules for six transport-launch containers with missiles entered next to the walls of the habitable volume and the electronics compartment, in the middle and rear of the sides. Before launch, it was supposed to lift the front of the container above the roof of the tower. In order to avoid damage to the tower structure, the WDH designers have provided two venting channels in its stern. Thus, the rocket's reactive gases could freely go up and back beyond the reserved volume.

All the main armament of the AGDS combat module was supposed to be protected by the armor of the turret. Similarly created and additional weapons for self-defense. On the roof of the turret, in front of the operator’s workplace, they provided for a remote-controlled machine gun turret, closed with a bulletproof armored casing. The dimensions of the casing allowed any available 7,62 mm machine gun with ammunition to be hidden under it. Smoke grenade launchers could be placed on the sides of the turret.

Thanks to a number of original technical solutions, the new AGDS / M1 self-propelled self-propelled gun with combined rocket and gun armament could solve a wide range of tasks and ensure the protection of tank formations from all sorts of threats. Developer Opportunities weapons The new SCRA allowed to attack targets at ranges up to 10 kilometers using rockets and at smaller distances using guns. Under certain circumstances, AGDS / M1 MASTER, thanks to the use of ADATS universal missiles, could play the role of what was later called the "tank support fighting vehicle".

The great advantage of AGDS / M1 over other US anti-aircraft missile and artillery systems projects was the use of a reliable chassis borrowed from the M1 Abrams tank. An armored hull in combination with a powerful engine could give the opportunity to fully operate together with tank formations and effectively protect them from air and ground threats.

The project AGDS / M1 received a lot of positive ratings. By the time the design work was completed (1996-1997 years), it was believed that the Pentagon would be interested in the new development and order the delivery of a large number of combat vehicles. It was assumed that after that will follow new contracts with other countries that are already using American armored vehicles. However, for a number of reasons, the US military limited itself to accolades. Several commanders and defense officials spoke in favor of starting the production of a new car, but it did not go further. Even a decade and a half after those events, AGDS / M1 continues to be an interesting project, which, however, has little chance of reaching mass production. At the beginning of the two thousandth, due to the lack of attention from the main customer, the AGDS / M1 project was frozen and then closed due to the lack of real prospects. The United States Army, in turn, has not yet acquired an anti-aircraft missile and artillery complex, capable of fully working in the same system with tanks.