Who has the right to wear krapovogo beret? 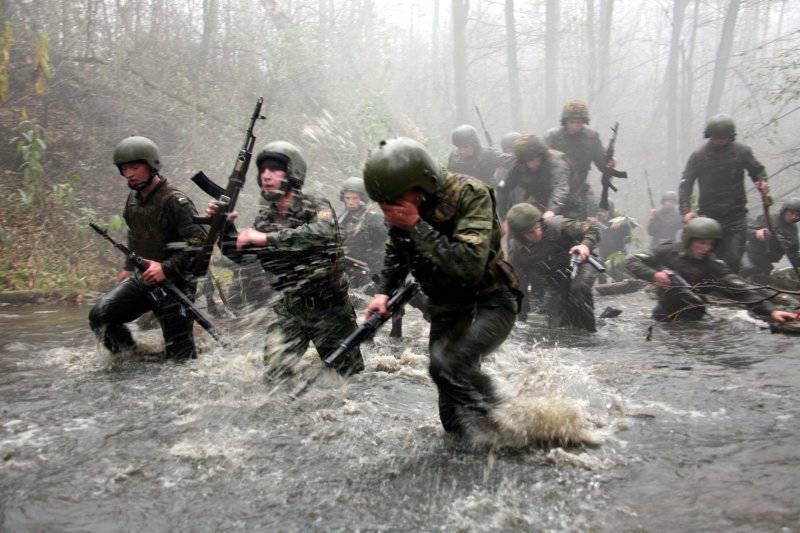 Twice a year, in the special-purpose unit Vityaz, qualification testing is carried out for the right to wear a maroon beret - the subject of distinction and special pride of the fighters of the detachment. So, quite recently, such qualification tests were carried out on the basis of the mountain training center "Hatsavita", which is part of the North Caucasus Regional Command of the Interior Forces of the Ministry of Internal Affairs of the Russian Federation (Krasnodar Territory).

Practically from the very first days of the existence of a special-purpose training company, which later became the famous Vityaz, the officers suggested using the maroon beret as a distinction. Lieutenant-General Sidorov, who at that time held the post of chief of combat training for internal troops, supported and approved this idea. By his order, one of the enterprises ordered the first batch of spotted berets in the number of 25 pieces.

In the period of 1978-1988, the spotted berets were used only on days when they were holding show classes or on public holidays. At the same time only a small part of the military personnel wore them. In 1988, the subunit was presented with 113 berets (that was exactly the standard number of company fighters) sewn from krapovo fabric. The gift was presented by the father of one of the servicemen, Simanenko. From then on for half a year, the red berets were worn over and without it. The bosses at the same time remained silent. However, soon the situation has changed dramatically. Gradually, studying and analyzing the experience of foreign colleagues, in particular, the particularities of training American "green berets", the leadership of special operations forces and the armed forces, and the servicemen themselves changed their attitude to wearing berets.

S.I. Lysyuk made a proposal to introduce a certain exam, which would help to reveal the most worthy to wear a maroon beret. Thus, it was supposed to raise the authority of the headdress. Instructors from among the special forces supported his proposal, and jointly compiled an examination program, which has survived to the present day, but with minor changes.

Initially, testing had to be carried out not entirely legally, masking them under complex control exercises. And the problem was that the leadership did not take the idea of ​​wearing the spotted beret by the elect, believing that all fighters of the unit without exception, without taking into account their level of training, should wear this headgear. However, over time, the situation has changed. The successful participation of special forces fighters in numerous special operations, a high level of their moral and psychological preparation demonstrated that in reality such tests are very, very necessary. Therefore, very soon they became traditional for the special forces units of the MVD of Russia.

The main objective of the tests is to identify military personnel with the highest level of individual training for actions in various critical situations, in particular, in the process of disarming criminals, and releasing hostages. No less important is the creation of incentives for the education of fighters of high moral and ethical qualities.

Qualification tests are carried out in several stages. At the first, preliminary stage, a final check of the skills of military personnel obtained for a certain period of training under the special forces training program is carried out. It is very important that the overall score for the final test does not fall below four points, and the grade for special physical, fire and tactical training should be excellent. Testing includes such standards as running a distance of three kilometers, the Cooper test (this includes the crouching emphasis - crouching, wringing out from the floor, jumping out of the crouching position), pulling up.

Qualification tests are usually carried out in one day. It includes standards such as overcoming the 10-kilometer march (before which a briefing is required, during which the assigned tasks are explained), then overcoming in extreme conditions a special obstacle course, checking the level of preparation for the storming of a high-rise building, hand-to-hand fighting and acrobatics and then the 100-meter sprint. In addition, in the course of overcoming the distance, the fighters also need to overcome "contaminated" areas with gas masks and water obstacles, repel sudden attacks from the enemy, repel an air attack, overcome obstacles, marshland and other natural obstacles. Sometimes at a distance use special obstacle lanes in the form of smoke-filled areas, minefields, fires. From time to time fighters are forced to move under small arms fire in small rushes or crawling. Moreover, a special group works throughout the distance, which deals with “psychological processing”, putting pressure on the special forces. The main task of such groups is to identify mentally unstable people. After overcoming the distance, tests on acrobatics and pull-ups are conducted. The time to overcome the march is determined by the commander, depending on weather conditions, time of year, terrain, but the control time should not exceed 2 hours. All fighters who could not meet in the allotted time, to the passage of further tests are not allowed.

On the whole route, the fighters are accompanied by instructors from among those who wear netting and who monitor the correctness of overcoming obstacles. At the same time, instructors are strictly forbidden to provide any assistance to the participants, to give commands or intervene in the course of the tests.

Then, after overcoming the route, the status is checked. weapons. All participants line up on the parade ground, and the commander takes turns calling down the fighters. Check is made by shooting of single cartridges. In the event that the weapon misfired, the fighter for further testing is also not allowed.

After that, a test of the skills of military personnel in high-speed shooting against the background of fatigue is carried out. Immediately after checking the performance of the weapon, the fighters move to the firing lines, where they perform special training exercises of automatic firing. Each participant has at its disposal no more than 20 seconds.

Skills storming high-rise buildings are checked on a five-story building. In this case, the fighters use a special trigger equipment. At the same time, at certain stages, they must fire from machine guns, use imitation grenades, knock out a window frame with their foot and successfully descend to the ground. A task is given no more than 45 seconds. Those who did not cope with the task in the allotted time, are not allowed to further testing.

Acrobatic exercises follow: kicks on the mock-up with a further roll, body lifting from the supine position, forward flips from the acrobatic bridge or springboard. In this case, all exercises fighters must perform without stopping.

Great importance and educational fights. As a rule, they last for 12 minutes without a break. At the same time, the 4 partner is changing, including not only verifiers who already have spotted berets, but also fighters claiming this right. The winner in the test is determined by the one who actively participated in the fight and lasted without a knockout.

It should be noted that for special forces, whose age is 35 years and more, there is a special, abbreviated, program that will include 3-kilometer cross, 6-minute training fights, without performing speed shooting, building storming and acrobatic exercises. On the route of the march, such fighters perform only one of the set introductory. And only the passage of the obstacle course is carried out without changes.

To assess the results of qualification tests, a special attestation commission is created in part, the members of which evaluate the participants in each trial. For each stage, fighters get a credit or fails. In addition, during the verification process, each participant may receive comments that are noted in the protocol. If a fighter receives three such comments, he is automatically removed from further testing. Thus, the final reaches the total 20-30 percent of the total number of fighters participating in the tests.

The right to wear krapovogo beret receive only those special forces, who have passed all the tests with an assessment of "test". Presentation of the beret is held in a festive atmosphere with the full construction of the unit. After rewarding, the fighter gets the right to wear a maroon beret, not only with the front dress, but also with a daily uniform. In addition, he receives a certificate in which the identification number is indicated, confirming the right to wear the maroon beret.

But the special forces should not forget that the right to wear a krapovoi beret can not only gain, but also lose. So, in particular, the spotted beret can be lost in such cases:
- manifestation of cowardice and cowardice when performing combat operations;
- reducing the level of special and physical training;
- adoption of rash decisions, as a result of which comrades were killed, the combat mission was disrupted;
- non-statutory relations;
- The use of hand-to-hand combat skills for personal gain;
- systematic violations of criminal law and military discipline.

Finally, we note, krapovogo takes does not bring its owner any additional benefits and privileges: no salary increase, no promotion. This is only moral satisfaction and a reason to be proud of yourself.