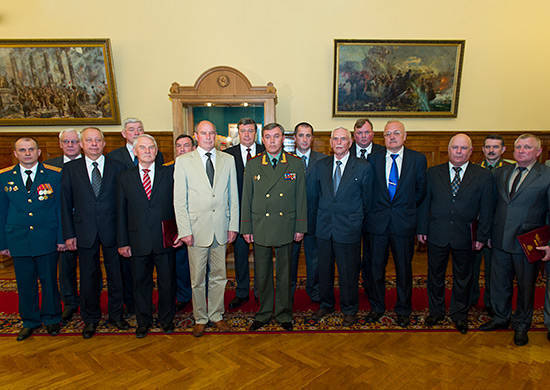 On May 29, the annual ceremony of presenting the State Prize of the Russian Federation named after Marshal of the Soviet Union G.K. Zhukov.


According to the results of the 16 competition in the field of military science, the creation of weapons and military equipment, literature and art, 16 authors of scientific works, developments, and creative works were named laureates.

In total, more than 50 people took part in the competition - representatives of various ministries and departments, institutions and organizations.

The awards were presented by the Chief of the General Staff of the Armed Forces of the Russian Federation - First Deputy Minister of Defense of Russia, Army General Valery Gerasimov.

Addressing the laureates, he noted that the authoritative Commission considered 13 papers submitted to the competition by individual authors and authors. "Among the applicants were military and civilians, scientists and production workers, writers and artists - real professionals in their work," - said the head of the Russian General Staff.

In the 2013 year, in accordance with the Decree of the President of the Russian Federation, the laureates of the award are:

in the field of military science

Vladimir Y. Anisimov, Senior Researcher of the Federal State State Military Educational Institution of Higher Professional Education “Peter the Great Military Academy of Strategic Rocket Forces” of the Ministry of Defense of the Russian Federation, Vladimir Kazarin, Assistant Professor, Lata Vasily Filippovich, Lead Researcher, Vladimir D. Roldugin, Professor, - employees of the same institution, - for a complex of military-scientific works on operational and strategic justification the development and use of a group of Strategic Missile Forces, contributing to a significant strengthening of the defense capability of the Russian Federation;

Yury V. Gulyaev, Director of the Federal State Budgetary Institution of Science Institute of Radio Engineering and Electronics named after V.A. Kotelnikov of the Russian Academy of Sciences, Zakharenkov Anatoly Ivanovich, Head of the Federal State Unitary Enterprise “18 Central Research Institute” of the Ministry of Defense of the Russian Federation, Matveyev Sergey Alekseevich, Deputy Director of the Federal State Unitary Enterprise “All-Russian Research Institute for Inter-sectoral Information - Federal Information and Analytical center of the defense industry "for science, Popov Mikhail Mikhailovich, deputy Secretary is the Russian Security Council, Igor Sheremet, member of the Military-Industrial Commission under the Government of Russian Federation, - for a set of scientific papers "Development of conceptual and operational-technical bases of special deterrence" that strengthen the Russian Federation's national security;

in the field of weapons and military equipment

in the field of literature and art

Vladimir Ivanovich Boyko, a pensioner, for a series of books revealing the greatness of the people's feat in World War 1941-1945, heroism and courage of the defenders of the Fatherland.


Since the establishment of the Marshal of the Soviet Union GK Zhukov State Prize of the Russian Federation, 193 has been reviewed for competition, 155 people have become laureates of the prestigious award.

The annual State Prize of the Russian Federation named after Marshal of the Soviet Union Georgy Zhukov was established by the Federal Law of April 19 of 1995 on “Perpetuation of the Victory of the Soviet People in the Great Patriotic War of 1941-1945”.

By the Decree of the President of the Russian Federation on October 28 1996, an interdepartmental Commission on the Marshal of the Soviet Union GK Russian Federation Prize was established and functions at the Ministry of Defense of Russia. Zhukov.

It consists of prominent military leaders, leaders of veteran organizations, scientists representing the main areas of military science, developers and organizers of the production of military equipment, recognized figures of literature and art.

The prize is awarded to Russian citizens in accordance with the Decree of the President of the Russian Federation in the amount of 300 thousand rubles:

in the field of weapons and military equipment: for the development of weapons systems and systems, new models weapons and military equipment, machines and mechanisms, instruments and equipment, industrial production technologies with indicators not lower than the world level; for outstanding results in the production activities of enterprises of the Russian Federation in the performance of defense orders;

Author:
Office of the Press Service and Information of the Ministry of Defense of the Russian Federation
Originator:
http://function.mil.ru/

Ctrl Enter
Noticed oshЫbku Highlight text and press. Ctrl + Enter
We are
Smashed contestScandals in the Russian education system: what troubles do “lime peels” treat
13 comments
Information
Dear reader, to leave comments on the publication, you must to register.