Truth and Fiction about the Ice Battle 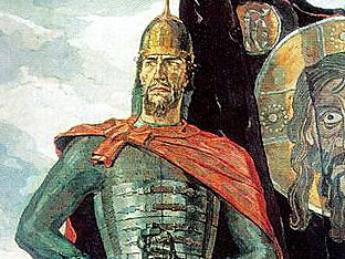 In the 1242 year, on the April 11, according to the Gregorian calendar, one of the most famous battles in the Russian military stories - the famous Ice Battle.


In 1237, a terrible disaster struck Russia from the east - a Mongol-Tatar invasion. During the first campaign of Batu, the north-eastern Russian principalities were ravaged. During the second campaign in 1239, the south of Kievan Rus was ravaged.

Russia as a whole was very much weakened. And at this time the onslaught on the Russian lands from the west intensified. German knights long ago settled in the Baltic States. At first it was the Order of the Sword, which by the described events had already ceased to exist after a severe defeat. It was replaced by the Teutonic Order, and directly on the lands of modern Latvia and Estonia was a vassal of the Teutonic Order - the Livonian Order. These were the German knight's spiritual orders, that is, powerful military organizations that solved the task of spreading the Catholic faith among the pagans with the help of a sword. At the same time, they were not even interested in the fact that, for example, the Russian lands were Christian, Orthodox. From their point of view, this did not change anything.

And so, taking advantage of the weakening of Russia, the troops of the Livonian Order took Izborsk, and then approached Pskov itself. Pskov knights managed to take with the help of treason. Part of the Pskov, led by Posad Tverdiloy decided to go to the hands of the Germans. They invited the Germans as military rulers of Pskov. Vogts were placed in the city (these are governors of the Livonian Order). And, actually relying on Pskov, the knights began to wage war against Novgorod in order to weaken Novgorod, and, if possible, to capture it. At least at the first stage to intercept his trade.

The Livonians built a fortress on the Koporye graveyard, which allowed them to intercept Novgorod merchants who were going along the Neva to the Gulf of Finland, and allowed them to raid both on the banks of the Neva and on the banks of the Volkhov, and even in the vicinity of Novgorod. The position of Novgorod became desperate. Novgorod only shortly before this - in 1240 year - with the help of Prince Alexander, the landing of the Swedes on the Neva, where the earl of Birger was broken, was helped by Prince Alexander. But after this battle Novgorod quarreled with Alexander and drove him out of Novgorod. Rather, it’s not that all Novgorodians are Novgorod boyars. And now, when Novgorod began to suffer defeats from the Livonians, the Chamber decided to turn again to Alexander, who at that time already had the well-deserved nickname Nevsky - with a victory over the Swedes. And Alexander was again invited to reign in Novgorod.

The first thing he did was take Kopor'e in the year of 1241, that is, he opened the Novgorod trade routes back and made it impossible for the Germans to raid directly on Novgorod. Then, in the 1242 year, Alexander Nevsky, as it was then said, took Pskov as an exile, that is, seized it on the move. Traitors were executed, German vogts were sent to Novgorod, Pskov again became a Russian city. Then Alexander Nevsky took Izborsk and moved the war to the territory of the order. We came directly to the moment when the Battle of the Ice took place.

How is it written in the Simeon Chronicle? “The Master, having heard of this, went against them with all his bishops and with all the multitude of people from their country, however many people there were in their country, and with the help of the king of Denmark. And they descended on Lake Chudskoye. Grand Duke Alexander came back. The Germans and chud followed him. The Grand Duke set up shelves on Lake Peipsi, on Uzmen at the Crow's Stone. Inspired by the power of the cross, and prepared for battle, he went against them. The troops converged on Lake Peipsi. There were many warriors on both sides. ”

And here, in fact, what is most interesting? Now there are people who question the very fact of the Battle of the Ice. They cite the fact that it was not possible to find large deposits of metal at the bottom of Lake Peipsi, which did not succeed in finding the Crow Stone. The description of the Ice Battle, traditionally studied even in schools, dates back to a later time. That is, when it is told about how Alexander Nevsky put troops on the ice of Lake Peipsi, singled out an ambush regiment, about how he prepared for the battle, hoping that the Livonians could fall through the ice, and how the knightly cavalry attacked him " pig ", supported by infantry, consisting of bollards. It is clear that this description is hardly true. It is difficult to imagine the closed masses of knightly cavalry on the ice in April.

The Germans are not suicides, and ours too. But to deny the fact of the battle is stupid and pointless.

The fact is that it is described not only in Russian sources. It is mentioned not only in the Life of Alexander Nevsky, not only in the annals and not only in the writings of later Russian historians. This battle is also mentioned in Livonian sources: for example, in The Rhymed Chronicle. True, the description there looks a little different. According to this chronicle, the troops fought not against the master of the Livonian Order against Alexander Nevsky, but against one of his biggest vassals, the Dorpat bishop Hermann. And these troops consisted of, strictly speaking, the knights of the Bishop of Dorpat, of the order's brothers and of the guests of the order. The guests of the order are secular knights who did not accept the monastic rite, in short, did not become monks and, nevertheless, are in the service of the order.

And also these were the warriors of the knights themselves. The fact is that each knight was a commander of a spear, usually numbering from seven to ten soldiers. That is, the knight himself, the squire (if it is a knight of the Order, then the squire was usually a novice of the order, also a heavily armed cavalryman) and infantrymen-knights. And besides this infantry, there was also the city militia of the city of Dorpat, that is, the heavily armed city infantry.

The order's army was strong enough and tried to strike a real blow at the forces of Alexander Nevsky. And it really intercepted his troops near Lake Peipsi. The battle has happened. And the fact that the “Rhymed Chronicle” mentions the grass under the horses' hoofs and does not mention anything about a fight on the ice does not change the essence of the battle that took place. And the essence of this battle is that the order troops, powerful, well-armed, and perfectly prepared, were completely defeated in the battle on Lake Peipsi. 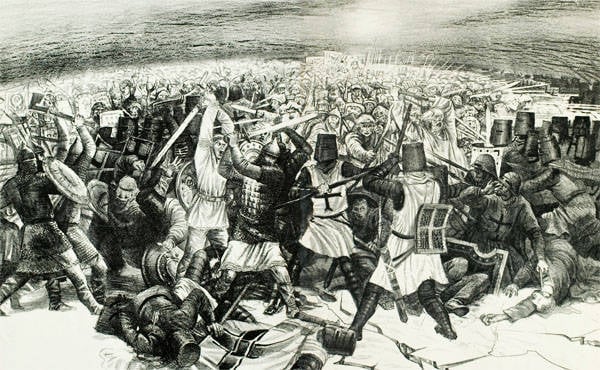 And if in our country this is attributed solely to the valor of our troops, skillful maneuvering and the ice that fell under the German knights, the Germans are trying to find an excuse in the cowardice of the Dorpat militia, who, having seen the complete defeat of the knights, decided not to fight (probably correctly decided, given that by then the knights were already completely defeated), and in the cunning and cunning of the Russians. The Germans tried to find an excuse for themselves, but they did not dare deny the fact that their army was completely defeated. And on this the Order of aggression against the Novgorod land was stopped.

Where did the description of the battle on the ice come from, this knightly wedge, where more and more lines of knights gradually stand: five knights, seven, nine, and so on; and the wedge, whose head and flanks are horsemen, is filled with bollards inside. This description is taken from a later battle. The fact is that there was another major battle where the order troops were defeated by the Russians. This is the famous Battle of Rakovor. It has now been safely forgotten, but it seems from the description of this battle, apparently, the compilers of the chronicles took the description of the Ice Battle, because contemporaries did not leave a detailed description. Therefore, it does not make sense to search directly on Lake Peipsi, that is, on its water surface, nor the Crow Stone, much less look for the “warehouse” of sunken knights under water. This is most likely not there. But on the shores of Lake Peipsi, the knights suffered a crushing defeat from the Russian troops: Novgorod, Suzdal, led by Alexander Nevsky.

In order to have at least some idea of ​​national military history, one must not read Fomenko-Nosovsky or conspiracy theories. It is necessary to read books like the Reader on Russian Military History. This is an important initial reading to get the base. It is here - the documents, primary sources, on the basis of which you yourself can draw further conclusions. 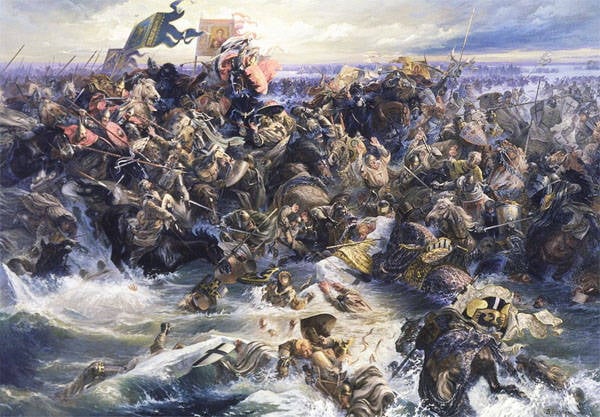 Ctrl Enter
Noticed oshЫbku Highlight text and press. Ctrl + Enter
We are
English historian Phyllis Jestais about the "Ice Battle" with comments and observations.Russian allies of Mongolo-Tatars
57 comments
Information
Dear reader, to leave comments on the publication, you must to register.