Georgian armed forces - the weakest in the region, despite an active desire to meet NATO standards: military analyst 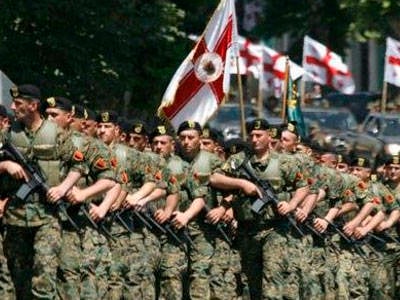 May 26, 2013, Georgia hosted the celebration of Independence Day. It was originally planned to hold a military parade, but later it was decided to replace it with an exhibition of weapons, as well as a small demonstration of combat aviation. Was presented armored vehicles "Didgori" and "Shamkori", infantry fighting vehicles (BMP) "Lazika" of its own production, Tanks T-72 of Israeli modification, BMP-2, Czech self-propelled artillery "Dana", American military SUVs "Hammer", BTR-80, modern American armored vehicles MRAP, multiple launch rocket launchers (MLRS) BM-21 "Grad" and their Georgian copies. In the end, Su-25 attack aircraft and Mi-24 and Mi-8 helicopters appeared in the sky.


The event is an excellent opportunity to look at how Georgia approached the problem of rearming and rebuilding its armed forces after defeat in the war unleashed by President Saakashvili against South Ossetia in August 2008. As a result of the military operation of the armed forces of the Russian Federation to force Georgia to peace, a significant part of the Georgian military equipment was destroyed or abandoned.

Almost immediately after the cessation of hostilities, statements were made by the United States and other allies of Georgia on the continuation of military assistance. The United States has declared its readiness to provide up to $ 1 billion to restore the combat capability of the Georgian army. The continuation of cooperation was also announced by Ukraine, the transfer of which of the Buk-M1 anti-aircraft missile systems (ADMS) to the Georgian air defense forces turned out to be the greatest problems for Russia during the 2008 combat operations of the year (Russia lost, according to various estimates, from 4 to 7 combat aircraft). Indeed, already in October 2008, Georgia received a large batch of military equipment from Ukraine - up to the 35 T-72 tanks. Later were transferred RSZO BM-21 "Grad", as well as ammunition and spare parts. For all this, Georgia paid only $ 5,6 million, which is several times less than the real price of the weapons listed above. In fact, these deliveries compensated for the loss of Georgian armored vehicles.

As for military cooperation with the United States, despite the statements made by the Americans, military assistance to Georgia in the postwar period averaged about $ 20 million per year. Basically, this money was provided to Georgia by armored "Hummer" and small arms. It is also worth noting the transfer of modern American armored vehicles 28 MRAP. In the 2012 year, the 2 patrol boats were transferred to Georgia, but this supply practically does not restore the Georgian fleet almost completely destroyed in the 2008 year. In addition, a significant part of the above funds goes to the training of Georgian officers and soldiers by American instructors.

Small supplies of military equipment were from other NATO countries, but they had scanty volumes and, in general, did not affect the overall picture.

Another global direction in the development of the Georgian armed forces is the development of its own military-industrial complex. Georgia has already started production of the Didgori armored vehicles - they are assembled on the basis of the Ford F-Series pick-ups. It was also demonstrated BMP "Lazika". The stated characteristics of these machines are quite good, but the real combat capabilities, as well as Georgia’s ability to set up production of a significant number of these machines, raise great doubts. Perhaps it would be more expedient to purchase time-tested and combat BMP-2, or the American M2 Bradley. Another product of the Georgian military-industrial complex was a copy of the BM-21 Grad rocket launcher system - ZCRS-122. Again - the number of systems produced can hardly be serious.

In general, these purchases very little enhance the real combat capability of the Georgian army, as there is a very large list in the direction of light weapons. As a result, it turns out that Georgia has at its disposal a very small amount of heavy weapons, as compared with neighboring countries. Many kinds weaponsGeorgia, such as operational tactical missile systems, or heavy MRLSs, does not exist at all, unlike its neighbors in the South Caucasus, Armenia and Azerbaijan. The latter also have a big advantage in the number of the same tanks - 2-3 times. As a result, there are very big doubts whether Georgia will be able to wage even a defensive war against these countries in the event of a hypothetical conflict. And an effective confrontation with the Russian Federation, Turkey or Iran is out of the question.

In modern warfare, as is known, one of the key factors is air superiority. Here lies the greatest weakness of the Georgian Armed Forces. Military aviation is available in Georgia in very limited quantities, and is represented only by Su-25 attack aircraft and Mi-24 helicopters. In such a situation, it seems appropriate to emphasize their strength on the strengthening of air defense. However, this practically does not happen. Georgia’s air defense is extremely weak, and it has not yet compensated for losses after the 2008 year. It is presented by the Israeli Spyder short-range air defense system, the Wasp short-range air defense system and the outdated C-125 air defense system. Also, perhaps after the 2008 war of the year, part of the Buk-M1 air defense system survived. All this is absolutely not enough to somehow cover the territory of the country. As a result, in combination with the absence of serious air forces, this will lead to a very rapid loss of control over the airspace and a very rapid defeat, as has already happened in August 2008 of the year.

The combination of all of the above should cause very serious concern to the leadership of Georgia, since the country, in fact, has the weakest armed forces in the region, despite the most active desire to meet NATO standards. Virtually no fully operational fleet. Both in quantitative and qualitative terms, all neighboring countries are superior to Georgian troops, and if the re-equipment vector of the Georgian armed forces is not shifted towards the purchase of serious heavy weapons and air defense systems, the situation will only get worse in the future.

Ctrl Enter
Noticed oshЫbku Highlight text and press. Ctrl + Enter
We are
Nikolay Silaev, Andrei Sushentsov: Georgia after the elections and prospects for Russian-Georgian relationsThe importance of the Victory Parade in Russia is being questioned
Military Reviewin Yandex News
Military Reviewin Google News
223 comments
Information
Dear reader, to leave comments on the publication, you must to register.