The warming of relations between Moscow and London: from oil to apples 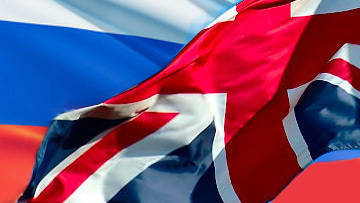 The warming between Britain and Russia, the title of this article, includes several components. The weather changed from cloudy to sunny after last year’s lawsuit, in which the disgraced oligarch Berezovsky was declared Elizabeth Gloucester “not credible” and “dishonest” (he had previously been known as such in Russia). The climate between the two countries has improved in the course of the Litvinenko case, which, as it turned out, worked for the British special services, who are now interested in lowering the case on the brakes - that is why the “Russian trace” lost its actuality. The March Strategic Dialogue (Lavrov, Shoigu-Haig, Hammond) was also a kind of favorable weather forecast, promising a hot friendship between the British and the Russians in the 2014 th “cross year of culture”. Significantly influenced the warming of relations and the economic component: British Petroleum has recently become a minority shareholder of Rosneft (19,75%). Finally, the climatic changes have reached the point that the British this season demanded not only somebody, but Russians to harvest vegetables.

Let us briefly describe the geopolitical components of international warming.

At the beginning of December 2012 of the year One political character, very well known in Russia and even proposing to make it a monarchy, lost outright against Roman Abramovich and found himself in a difficult financial situation. The disgraced oligarch B. A. Berezovsky even sold real estate in Surey County, acquired by unsustainable oligarchic work, stopped transferring money to his own “Civil Liberties Fund”, and did not give money to Alexander Litvinenko’s widow. Before - gave, and a lot.

Once Mr. Berezovsky led and financed an entire campaign to discredit the Russian authorities. “Ironically, the decision of the English court did what the 10 years had failed the Kremlin: put an end to Boris’s anti-Putin activities in London,” - with a bitterness in his voice сказал one friend of Berezovsky, who wished to preserve anonymity.

In addition, Judge Elizabeth Gloucester very unpleasantly responded about Boris Abramovich. The court decision will remain in the annals storiessince what is said by the judges in England is being recorded. Mr Berezovsky was branded as “not trustworthy” and “dishonest”.

Later, on March 23 2013, Mr. Berezovsky died mysteriously, which gave rise to reports of a “Russian trace”. It seemed that between Britain and Russia will become colder again. But no: Western journalists gossiped, gossiped - and, observing the authorities' disregard, were silent.

Same march London hosted the first meeting of the Russian-British Strategic Dialogue. The delegation from Russia was headed by Sergey Lavrov and Sergey Shoigu, and the British were represented by William Hague and Philip Hammond. This high-level meeting aroused heightened interest among politicians, experts and journalists, recalls "Century"since Moscow and London’s relations have deteriorated sharply since the mid 2000, including due to the “Litvinenko case” and London’s position during the short Georgian war (2008).

The closed conference mode did not give an opportunity to judge it in full. But something positive about the upcoming cooperation between Russia and Britain became known after the meeting.

S. Shoigu told the press that Russia and the United Kingdom "agreed on further steps to establish not only military, but, possibly, military-technical cooperation."

Another result of the meeting was an agreement signed by Lavrov and Haig on holding a cross-year culture in 2014. “This is in line with the dynamics of the development of our relations,” said the Russian minister.

Commenting on some of the contradictions that exist in relations between Moscow and London, Comrade Lavrov pointed out that "problems will always exist in relations between any two countries, especially countries with regional and global interests." The main thing in this question "is to make sure that artificial problems are not added to the existing ones," he believes.

That March contact of Moscow and London in the format “2 + 2” (with the participation of the foreign ministers and the ministries of defense) was called unprecedented by the observers. The British Foreign Office suggests that in the future such negotiations will take place on an annual basis. The following will most likely take place in Moscow.

In a recent review from "Inopressy" are given materials of American sources on the Litvinenko case.

The Wall Street Journal reports that the British inquiry into poisoning in 2006, the former KGB agent Alexander Litvinenko, is under question, because on Friday the judge supported the British government’s demand to hide classified documents from the public. The coroner said that without these documents relating to the possible involvement of the Russian state in the death of Litvinenko and to any facts of the British Government’s prior acquaintance with the threats of his life, the inquiry would not be “complete, honest and courageous.” The author of the article, Jeanne Whalen, points out that Owen supported the government’s demand to keep secret documents, but not all. He reviewed the materials provided by the government in closed preliminary hearings. He cannot publicly state their content.

The widow of Litvinenko accused the coroner of refusing to “search for the truth about the responsibility of the Russian state for the death of her husband,” says The Huffington Post. A statement by lawyers for Marina Litvinenko says: "This is a very sad day for Litvinenko, a tragedy for British justice, which until recently was respected around the world and tried so hard to expose the crimes committed by the collusion of organized criminals operating from the Kremlin."

William Dunkerley, whose article is published "Voice of Russia", says that there is probably something more behind the case than we see at first glance. British authorities in this case may receive a conflict of interest.

First, the issue of prevention: the ability of the authorities to prevent a crime. Litvinenko worked for the British intelligence services. Did they know about the circumstances that could lead to his death? Could they have prevented his death? If the secret services could not save their agent, did they escape responsibility for this? If any fault lies with the British government, then it may be subject to legal claims from the widow of Litvinenko.

Secondly, another area of ​​conflict of interest is the previously sound baseless accusations against Russia. They seem to be largely based on the accusations voiced by Mr. Berezovsky and his supporters. The author of the material told about this in the book Litvinenko's Fake Murder.

“Has the British government been deceived by Berezovsky? And is it now trying to avoid a well-deserved humiliation due to the fact that this fact will become public? ”

According to RBC, employees of the central office of TNK-BP Management, in large numbers, went to work at Rosneft. Of the 1600 employees, the corresponding statements were written by 90%.

The Russian oil giant also announced the completion of the acquisition of 50% from TNK-BP from AAR in exchange for 27,73 billion dollars.

Rosneft has consolidated 100% of TNK-BP, becoming as a result of one of the world's largest public oil and gas companies in terms of production and hydrocarbon reserves.

“We welcome BP as the largest shareholder of Rosneft, who through a representative office on the board of directors will participate in shaping the company's strategy,” said Igor Sechin. He noted that the production of the combined company “Rosneft” - “TNK-BP” in 2013 will amount to 206 million tons of oil, and the revenue - 4,9 trillion. rub.

This summer season Russian guest workers can certainly be found on farmland in Britain in very large quantities. Russian, as well as Ukrainian specialists will show a master class in the collection of fruits and vegetables.

Yuri Matsarsky ("News") in the article “Britain wants guest workers from Russia” recently noted the fact that the Migration Board at the UK Border Service recommended the government to introduce special quotas for attracting seasonal workers from Russia and Ukraine.

In the next two years, the country will face significant labor shortages in the agricultural sector. As a member of the Migration Board, Jonathan Wadsworth, told Izvestia, citizens of Russia and Ukraine are already working in Britain, albeit in small quantities. These people cope with the work, according to the official, better than, for example, people from Pakistan and other Asian countries. The latter are simply not familiar with traditional European crops.

The expert noted that, according to the Migration Board, the salary of an unskilled agricultural worker in the English outback is about one and a half times higher than the maximum income of Russian or Ukrainian peasants. Labor on British farms is paid for by the job, and hardworking Russians and Ukrainians are ready to gather or sort fruits and vegetables all day long, separating turnips from potatoes, and apples from cabbage.

Observed and commented on Oleg Chuvakin
- especially for topwar.ru
Ctrl Enter
Noticed oshЫbku Highlight text and press. Ctrl + Enter
We are
Results of the week. “He declared this vile thought as his achievement and called tolerance”Litvinenko: polonium trail leads to the Kremlin, but in a bizarre way
Military Reviewin Yandex News
Military Reviewin Google News
62 comments
Information
Dear reader, to leave comments on the publication, you must sign in.