30 May 2013
25
At present, China, having a rapidly developing economy, is becoming one of the leading world powers. A large population and a shortage of natural resources in this country have become the source of various internal contradictions that the PRC leadership is trying to solve at the expense of other states, including the Russian Federation. At the same time, a number of experts see a clearly developed strategy of gradual expansion into Russian lands and concentration in their hands of the means of production, marketing of leading goods and services in areas of strategic importance for Russia. 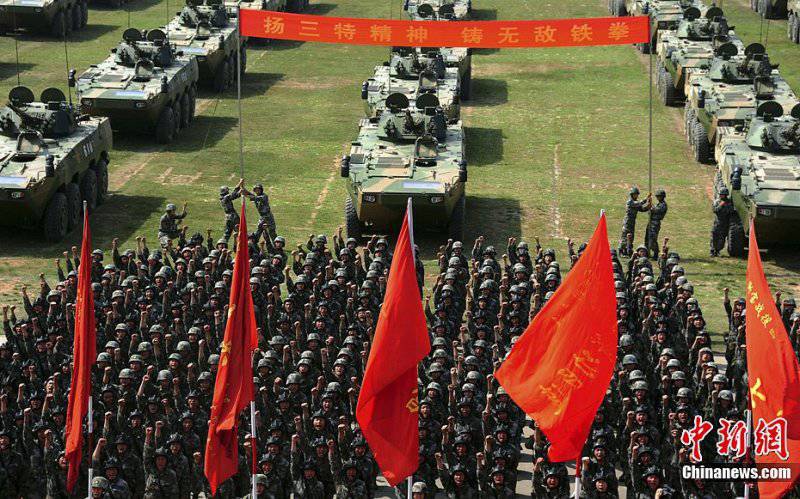 Recently, the Russian community has been actively discussing the topic of Chinese expansion, right up to the scenarios of a military conflict. On the one hand, there is overcrowding in the North China territories, on the other - half-empty territories of Eastern Siberia and the Far East. Due to the small population of these regions and their settlement by legal, and in many cases, illegal Chinese migrants, Russia may face the fact that there will be more Chinese in Siberia and the Far East than Russians. It is possible that later, when there are more Chinese here than Russians, in fact, these territories will be controlled by China, legally remaining in Russia. It is here, first of all, about the demographic expansion. At the same time, Western analysts give threatening figures that do not correspond to reality. Thus, E. Gilbo, Doctor of Economics at the Diplomatic Academy for Peace at UNESCO, estimated the number of Chinese in Russia at 8 million.

At the same time, opinions about the possible threat of such an expansion can be explained by the fact that the Russian Federation does not have an accurate statistical record of Chinese migrants, there are discrepancies between the data of different departments. According to the Federal Migration Service, at least 300 of thousands of Chinese enter the country every year, according to the FSB, 2 times more. Only half comes back. According to the FMS of Russia, 2009 had thousands of Chinese citizens temporarily registered for 235, another 103 of thousands of Chinese temporarily worked according to labor quotas at Russian enterprises. If you add to them the Chinese, who received Russian citizenship, and are in the Russian Federation illegally, then their number will be slightly more than half a million people, which is significantly less than the Chinese in the United States.

The Migration Service periodically detains illegal immigrants and deports them back to their homeland. In addition, regional labor quotas were introduced for citizens of foreign countries, and the Cherkizovsky market in Moscow was liquidated. The Chinese, assimilating in Russia, also do not pose a big threat, as they are not trying to defend their national identity, and their children in mixed marriages consider themselves Russians in the second generation. Thus, with the right migration policy and the clear work of the organs of control over the implementation of migration legislation, the threat of Chinese demographic expansion becomes exaggerated.

Considering the possibility of China’s military expansion against Russia, it should be noted that, despite the development by the impressive pace of the military modernization of the PLA, the armed forces of the PRC are still at a not very high level. It makes no sense for China to get involved in a military conflict with Russia, which is a nuclear power. Moreover, the Chinese mentality is alien to forceful methods of solving problems. They are guided by the slogan of Deng Xiaoping \ "Peace and Development \", the meaning of which is that the country should be surrounded by friends. Thus, the variant of Chinese military expansion exists at the level of emotions and assumptions.

At the same time, as the recent Russian-Chinese initiatives have shown, vital resources can be obtained without aggression on mutually beneficial conditions. The Chinese leadership understands that in the modern world the option of "forceful seizure of the lands of the northern neighbor" is not real, therefore the economic expansion.

China presents promising chances for the development of the world economy, including the neighboring Russian economy, especially its regions of Siberia and the Far East with their underdeveloped infrastructure. At the same time, Russia, above all, is considered by China as a huge source of raw material resources. Thus, in 2009, a program of regional cooperation between Eastern Siberia and the Far East was approved by the Russian Federation and the northeastern provinces of the People's Republic of China, providing for the implementation of joint projects in the infrastructure and economy of both countries. According to the adopted program, many enterprises will be created in Russia with the involvement of Chinese labor. In this case, most of the products will go to China.

In the coming years, a lot of joint projects are planned in the hydropower, forestry, mining, oil and gas industries that are beneficial, especially to China. Consequently, everything goes to the fact that the Asian part of Russia will gradually become the property of China. Thus, in 2010, the company OAO \ "EuroSibEnergo \" carried out the necessary preparations for a public offering and plans this fall to place on the Hong Kong international stock exchange, according to unofficial data, up to 25% of shares. As a result, the number of owners of large dams on Siberian rivers can include Chinese hydro companies.

In connection with the increase in the rate of economic growth in China, China’s need for raw materials will only increase. Thus, Russia is increasingly tied its economy to the giant eastern neighbor, will gradually be its raw materials appendage. And the feature of this process is the impossibility of its quick stop. And this creates the danger of a threat of economic expansion.

Ctrl Enter
Noticed oshЫbku Highlight text and press. Ctrl + Enter
We are
Military reform as an integral part of the security concept of the Russian Federation: Systematic dynamic assessmentRussia is unlikely to avoid China’s expansion in one form or another.
Military Reviewin Yandex News
Military Reviewin Google News
25 comments
Information
Dear reader, to leave comments on the publication, you must to register.