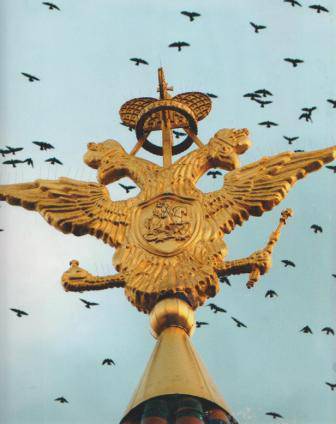 Answer to Mikhail Leontyev about the "danger of turning Russia into a nation-state" ...


How do you think, dear readers, how could it happen that the father and son of Kadyrov moved during the Second Chechen War from the separatist camp, the Basayev-Maskhadovs, etc. (in which they were known to be during the First War), to the side Russia? This question, in fact, is not at all private, concerning not only Chechnya and Chechens. The answer to it will clarify a lot to us.

Option one, that Akhmat and his son Ramzan initially experienced warm, friendly feelings towards the Russian people, Russia, considered it their homeland, etc., please do not offer. I am afraid that even some official propagandists of multiculturalism and tolerance, if they sound such versions, do not really believe in them. Option two, especially beloved by both Caucasian Wahhabis and Moscow liberals, that the evil KGB officer Putin simply bought them for the money of Russian taxpayers, please also reject. For money, it happens that they are killed, but for the sake of them it is almost impossible to make them die. They die only for what they really think is right. The argument about material motives can be discussed for a long time, but I think it is clear to a non-prejudiced observer that it’s not about the money or at least not about it alone.

To look into another person’s soul, of course, we cannot, however, suggest what the answer to our question should be wrong, in fact, difficult. It seems that the essence is as follows: Russia was able to offer three things to Chechnya.

The first is, oddly enough, justice. Not abstract justice in general, but its larger volume compared to what others have proposed. These very others, the “guests” from the countries of the Arab world and their sponsors, viewed the Chechens only as raw materials for the continuation of the war with Russia, in fact - cannon fodder. Before any needs of the people there, their aspirations, as well as the lives of its individual representatives, they did not care. Young Chechens are killed during the “jihad” against the Russians - well, not killed - bad. You can not - teach, do not want - make. The most competent and responsible representatives of the people (and the same Akhmat Kadyrov was, as you know, the mufti of Chechnya) had time to consider this situation well in the years after the first war.

The second thing Russia offered to Chechnya was protection. Protection, first of all, against external forces, which considered traditional Islam, professed by the Chechens, as something that needs to be corrected and brought to a common Wahhabi denominator. As we know, with those religious leaders who uphold traditional Islam in Russia, the Wahhabis have a short conversation. In this sense, of course, Akhmat and Ramzan Kadyrov entered into this struggle for their faith for their own reasons unrelated to Russia. However, to lead her alone, without her help, they could hardly have done so.

And finally, the third thing that Russia, to some extent, gave Chechnya, was, surprisingly, a civilization. For the Russian ear, accustomed to self-flagellation and continuous spitting from the outside, this sounds a bit strange in our time. What other such civilization can we bring to someone? We ourselves have it not. One theft, kickbacks, cuts and Chubais. Nevertheless, the possibility of building factories and skyscrapers in Chechnya, instead of digging in the land of zindans and business on hostages, was provided by Russia. And let them say that this is just a flood of money, a tribute that Moscow is paying to Kadyrov, and so on. Anyway. The fact remains. Neither the monarchies of the Persian Gulf, stuffed up to the neck with money, nor the very wealthy “friends” from Europe and America, did not give money to Maskhadov’s skyscrapers. But on zindans, shahid belts and mercenaries - please.

In this example, we visually observe the mechanism for the preservation and expansion of the Empire, since it has operated for long centuries. Russia, pushing its borders for thousands of kilometers, in fact very rarely won anyone. Such conquests "head on" in our stories can be counted on the fingers. In all other cases, the Empire, first, offered protection from an external conqueror, whose coexistence was often unbearable, as, for example, in cases of Polish oppression in Ukraine or the tragic fate of Armenia and Georgia under the rule of the Ottomans. Secondly, the Empire offered justice, abolishing the arbitrariness of the local tribal elite, which, by the way, often gets along remarkably well with the external conqueror on the basis of the plunder of its own population. So it was, for example, with the Little Russian gentry who had converted to Catholicism in the seventeenth century (which differs little from today's “European-integrating” Party of Regions of Ukraine). Finally, the Empire carried civilization, building railways where people rode horses or camels yesterday, creating a system of education, health, and much more.

And now the question. How does this mechanism of expansion and reproduction of the Empire feel today? Does it still work or is it broken?

How are things going with the defense of oppressed and oppressed peoples? Can Russia provide it?

The answer is simple. In many Russian autonomies, the population of a non-titular nationality is oppressed. Moreover, these are not only Russians, but also nations that are in the minority in “complex” autonomous formations like Kabardino-Balkaria or Karachay-Cherkessia. In the same Chechnya, where there was a war, as in Ingushetia, where there was no war, the Russian population was subjected to genocide. Massacre happened. Today the Russians are driven into such a position that they have turned out to be practically incapable of protecting themselves, not to mention other nations.

Is the Russian state able to ensure justice in general and resist the arbitrariness of the local tribal elite in particular? The question is rhetorical. There is no firm order and fair trial today even in the most indigenous Russia. The notions of good and evil, characteristic of our people, were trampled under the destruction of the state and “economic reforms”. On both sides at the same time, kleptocrats from Moscow and migrants from the suburbs, with impunity, carry their ideas of "good and justice" in the country. “If I stole, it’s good; if you steal from me, it's evil.” "If I slaughtered a representative of a neighboring tribe, it is good, if he is evil to me." Today’s Russia is not able to eliminate the arbitrariness and the “right of the strong” neither in autonomies, nor within itself. Where the law established by the imperial people stops working, wild, primitive "concepts" return.

How are things in Russia with civilization? Can she today guarantee her blessings for herself and carry them to others?

The economy, by and large, comes down to the export of raw materials and the import of finished products. Popular culture - to "House-2". Education under the guidance of the Minister Livanova degrades. The country stopped flying on its airplanes, and the skyscrapers we build the Turks and the Chinese. All those responsible for the current state of our civilization, including two key figures, Gorbachev and Chubais, still feel dry and comfortable.

So what about the Russian "imperial"?

This is probably a rough comparison, but if you are impotent, you should not go in search of brides. You will find yourself unnecessary, and you, in fact, no one is needed. This, in fact, is somehow understood by everyone, but rarely does anyone say it out loud. Supporters of the imperial policy are afraid to admit its current failure, opponents do not want to talk about the losses incurred by a country that has ceased to be an imperial state.

What do people expect from Russia, both inside the country and in the near abroad?

First, protection from external enemies and their allies. This number includes the “comrade wolf” from the Washington Regional Committee, and the oil sheikhs - sponsors of terrorism, and their allies such as high-ranking “marsh” liberals, Wahhabis, various local Russophobes, juvenile and blue NGOs, etc. Can Russia guarantee protection from them, at least within their borders? Ask those Russian people who are leaving the North Caucasus today under the pressure of local nationalism and imported Wahhabism. Ask those who have an implanted juvenile justice system from the outside begins to “withdraw” children. Can the state protect them, does it want?

The second is justice. The elimination of the power of all sorts of khans, bayis and hetmans and the lawlessness generated by this multicolor feudalism, the restoration of the rule of law over the entire territory of the country. No multiculturalism, democracy and “self-government”, when every local feudal lord with impunity creates everything he wants, no one needs for a long time. This "good" so in prosperity at all. Today, the exact opposite is claimed. The problem is only one. If you have arbitrariness, then to someone else you can not bring anything else. As long as the thievish perestroika boyars, chosen by the way, conceived on the same tribal principle, continue their carefree life in Moscow, nothing will change in this regard. The more Russia produces oligarchic obschechechevekov to live in London, the less attractive it becomes for everyone else.

And finally, the third point, civilization. If you have industry, education, health care, science, etc., are degrading, you will not be able to ensure their achievements either for yourself or bring it to someone else.

The Russian imperial mechanism with a great creak but still turns occasionally some more, as happened in the case of Chechnya. However, this happens less and less, and the costs of this process are increasing. Costs, above all, for the Russian people. An empire that provides neither protection, nor justice, nor civilization becomes useless to anyone and ceases to be an empire.

Ctrl Enter
Noticed oshЫbku Highlight text and press. Ctrl + Enter
We are
Situational analysis of the death of the MH17 flight (Malaysian Boeing 777), made on the basis of engineering analysis from 15.08.2014Results of the week. “To sell something unnecessary, you must first buy something unnecessary, but we have no money!”
Military Reviewin Yandex News
Military Reviewin Google News
121 comment
Information
Dear reader, to leave comments on the publication, you must to register.