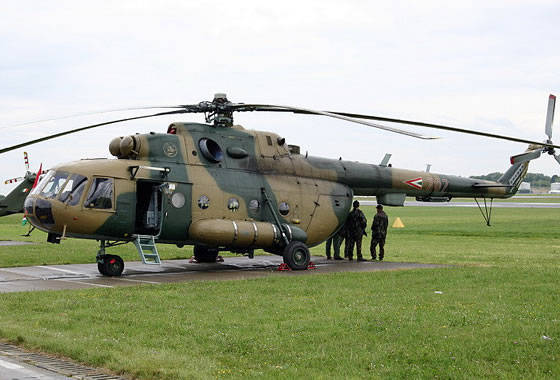 
Following the meeting, Defense Minister Chaba Hand, said about 105 billion forints (465 million dollars) will be allocated for the purchase of multi-purpose helicopters and transport aircraft for the Armed Forces.

It is planned that tenders for the supply of new aircraft will be announced before the 2014 election year, after receiving approval from the commission, consisting of representatives of the four largest parliamentary associations.

A specially created initiative group of the Ministry of Defense will develop an acquisition project (civil and military needs assessment) by the third quarter of 2013, including a tender schedule and road maps of the programs to be submitted to parliament. Details of the tender will be developed later in accordance with the practice of public procurement in the European Union. An open international tender is expected to be announced at the beginning of 2014. According to the preliminary schedule, after the elections, the new government will begin to evaluate the proposals received in the middle of 2014.

Chaba Hand noted that after the liquidation of the national airline Malev in 2012, Hungary did not have aircraft to transport the country's leadership. A small fleet of tactical aircraft An-26 outdated.

At the moment, it is not clear whether the funds allocated for the purchase of 22,1 million dollars will suffice to meet the transport needs of Hungary. MoD is currently considering the purchase of three used aircraft with an estimated value of 5 billion forints under an open tender.

According to the statement of Minister Chaba Hand, and the Chief of the General Staff of the Hungarian Armed Forces, Lieutenant General Tibor Benko, Hungary continues the process of replacing outdated Soviet weapons. Previously, the Minister of Defense announced the presence of three options for the modernization of the helicopter fleet, including the repair of operating vehicles, the purchase of used or new helicopters. According to the chief of the General Staff, the Armed Forces need modern multi-purpose helicopters to conduct tactical operations, transport troops and cargo, as well as support emergency response operations, medical evacuation or evacuation of Hungarian citizens abroad.

As previously stated by Chaba Hand, the state of the Hungarian Armed Forces fleet does not meet modern requirements.

In particular, part of the armed forces of the Hungarian Armed Forces Mi-8 are in operation since 1969. The Hungarian Air Force has 28 helicopters of various versions of Mi-8, although, according to unofficial information, only 7 of them are suitable for flying (6 Mi-8T and 1 Mi-8PS). In addition, there are Mi-7 17 troop carriers, which have been upgraded as part of a contract worth 32,2 million, signed in the 2008 year.

In 2008, the Hungarian Armed Forces Command announced the need to buy 10 new multi-purpose helicopters, but the lack of financial resources led to the transfer of the project to 2011 year. Since September 2011, the Ministry of Defense of Hungary has been negotiating the purchase of 32 reconstructed multi-purpose UH-1N “Hugh” helicopters from the USMC. However, at the end of 2012, it was announced that the government had rejected this program, the cost of which was estimated at 342 million dollars.

Eurocopter with EC-725, Sikorsky Aircraft with S-70i, Black Hawk, NH Industries with NH-90 announced their preliminary intention to take part in the tender for the supply of Hungarian multi-purpose helicopters. It is not excluded that Russia will also offer for the tender new Mi-17 type cars.

Ctrl Enter
Noticed oshЫbku Highlight text and press. Ctrl + Enter
We are
Russia firmly occupies a place in the global arms market 2 and will maintain its position in the foreseeable future.Armored Vehicles Market in the Middle East in 2005-2012 and forecast for 2013-2016
Military Reviewin Yandex News
Military Reviewin Google News
18 comments
Information
Dear reader, to leave comments on the publication, you must sign in.