29 May 2013
45
After the regular session of the Arctic Council (AU), which took place not so long ago in the Swedish city of Kiruna, arrived in the “Arctic Regiment”. In addition to the eight permanent members of the AU (Arctic and subarctic states) of Russia, Canada, the USA, Norway, Iceland, Finland, Sweden and Denmark, the Arctic "fraternity" has grown by such states (permanent observers) as China, Singapore, Italy and a number of others. The “Military Review” has already discussed the topic of how I became one of the permanent observers of the Arctic Council, for example, China, from which, before the Arctic, what is called, two cubits on the world map. The discussion of the Chinese “hit” took place, however, not only in the Russian media environment. A negative reaction to this event has caused this among the public of other states, which today constitute, let's say, the backbone of the Arctic Council. Against this background, it will be interesting to consider what steps, after a peculiar expansion of the AU, our neighbors of the Arctic decided to take. 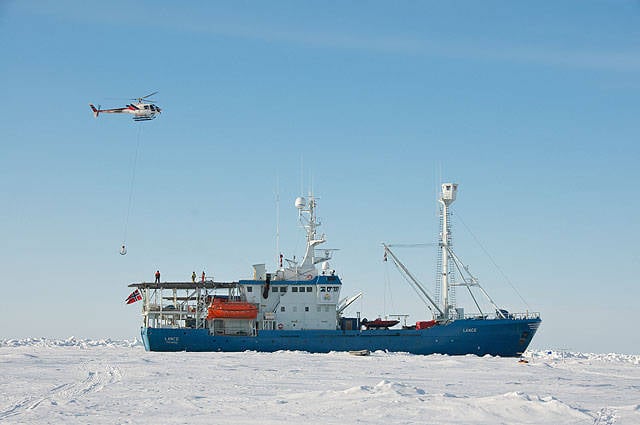 One of those states that, to put it mildly, was not eager to expand the Arctic Council at the expense of countries that were clearly not within the acceptable distance from the Arctic, was Norway. Before voting on the admission of the PRC and other countries to the number of permanent observers, several Norwegian publications offered their readers materials according to which China is ready to rush to the Arctic riches, but it does not comply with environmental conventions on its territory. This, according to the plans of the leaders of the Norwegian publications, should have influenced the outcome of the vote, but, as it turned out, had no effect. As a result, the Norwegian authorities did not declare that the decision was made against the wishes of the Norwegian people, but decided to step up their activities in terms of the development of Arctic resources.

As it is known, between Moscow and Oslo since 70-ies of the last century there was, let's say, an aquatic dispute. He touched the state accessories of a certain part of the Barents Sea with an area of ​​175 thousand square meters. kilometers The Soviet and then the new Russian authorities were ready to sign with the Norwegians an agreement on the division of this section according to the so-called sectoral principle. This principle was associated with the use of the borders of the Arctic possessions along the meridians, which is written in the documents of the year 1926. Norwegians did not go to such a section, but declared that it is necessary to divide the water area and all its wealth in the middle. The authorities of the USSR and Russia did not make concessions to the official Oslo for 40, but in 2010, Dmitry Medvedev and the Norwegian Prime Minister Stoltenberg clapped their hands and the Norwegian scenario was implemented. Then Norway received a generous gift. However, not everyone knows that this agreement had another side, which in the current conditions of the struggle for energy resources, it is impossible not to mention.

The fact is that in the agreements with the Norwegians the following is indicated: if on the shelf one of the countries discovers hydrocarbons whose reserves in the field cross the state border, then the development of such a deposit can be carried out only by joint efforts. It would seem that this clause obviously will not allow any of the countries (neither Norway nor Russia) to pump the shelf oil on the former disputed area, as they say, into one person ... But the current realities again make us think about the observance of these agreements by both countries.

The problem is that immediately after the division of the disputed part of the Barents Sea, the Norwegians began to carefully examine what they got after signing agreements between Stoltenberg and Medvedev. Then it turned out that on the Norwegian side there are oil reserves estimated at billions of barrels (about 2's, according to the most modest estimates). The Norwegians first showed great joy in this regard, but then they remembered the agreements with Russia: if the field crosses the state border, then there can be no one-sided development. After that, in Oslo, they calmed down and took a wait-and-see attitude: they say that Moscow will say about this. They waited and waited, but it did not wait for anything from Moscow.

That same session of the Arctic Council happened here, at which, to the Arctic, I'm sorry, they flooded everyone. The Norwegian authorities decided that if Moscow is silent and opens the gates to the Arctic for anyone who wishes, then it’s time to act more decisively, if not to speak, brazenly ... Norwegians in this case can certainly be condemned, but impudence is the second happiness ... If "partners" ( that is, our authorities and we are silent like Norwegian cod, then it’s time to take the bull, that is, the Arctic and its wealth, by the horns — that’s what official Oslo apparently thinks.

This determination was expressed in the fact that immediately after the meeting of the Arctic Council in Oslo, they decided to send a group of MAREANO research vessels to the former disputed waters of the Barents Sea. It is planned that the court will begin their work in a few weeks. It would seem that there is daring and decisive, because Moscow itself donated to Oslo an impressive piece of Arctic wealth, here in this donated water area the Norwegian ships will conduct their scientific research. But the point is that now the court of the interdepartmental program MAREANO does not want to be content with the exclusively Norwegian water area. The main work will be carried out in the bottom part of the Barents Sea, which is directly adjacent to the Russian area of ​​responsibility.

The staff of the Norwegian project assures that they will conduct research on the biological diversity of the border areas of the water area, as well as map the bottom of the Barents Sea. But if so, then the question immediately arises: why literally on a ribbon separating the Norwegian and Russian waters of the Barents Sea and its bottom territories? Why not start with water areas more distant from the Russian border? With all due respect to the Scandinavian honesty, it seems that official Oslo is cunning.

Obviously, the experts of the MAREANO project received the task of checking how deeply the hydrocarbon field that the Norwegians discovered not so long ago goes to the zone of Russian influence. Understanding that Moscow is silent, Oslo hopes that the Norwegian research will help convince the Russian authorities that the hydrocarbons are purely Norwegian, and that Russia is stupid to claim them. Well, if you are convinced in the right division of disputed territories, what prevents you from convincing even in this situation? .. If the Norwegians succeed in turning this impressive scam, then China’s entry into the Arctic will not be scary for official Oslo.

And what about Moscow? Moscow, realizing that clapping ears could play a bad joke, decided to go the original way. Just the other day, Dmitry Medvedev ordered to transfer, without any contests and geological surveys, sections of the Barents and Kara Seas shelf to such companies as Rosneft and Gazprom. Rosneft received three sites on the Barents Sea shelf. It seems that the Chairman of the Government acted in the mode of the sharpest time trouble, trying to counter the work of a large Russian company with the Norwegian “research”. However, Rosneft still needs time on the shelf, as they say, to swing, to stake out a place, and the Norwegian research ships are already under steam. Especially, Rosneft, apparently, will stop at purely Russian resources, but the Norwegians strive to probe the volume of wealth at home, and we have an underwater border - this is a very ephemeral thing ...

In general, in such a situation there can be one prospect: keeping an eye on the Norwegians - this is the time to quickly begin your “scientific research” in the immediate vicinity of their submarine boundary - these are two. But we will sleep again, relying on unparalleled Norwegian friendship and honesty ...