For the good of the Fatherland 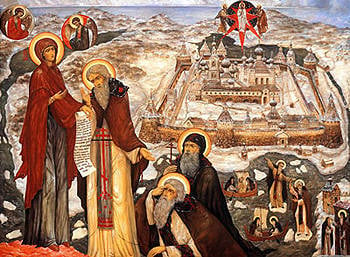 The development of the Russian state after the adoption of Christianity was inseparably linked with the creation of monasteries that were interested in strengthening the power of the country. The charters of Orthodox monasteries strictly defined the activities of the monks. In accordance with the Charter, the goal of monasticism in Russia was the closest union with God and the attainment of the highest spiritual perfection. All this is based on the voluntary implementation of the Christian commandments. If you touch these commandments, the sixth commandment reads “Do not kill.” How could our compatriots in the distant past to resist in the monasteries invasion of enemies?


The XVI century, after the concentration of power in his hands by Tsar Ivan IV, became a period when Russia tried to expand the borders of the state and go to the seas to develop trade. Long before this, the Novgorodians in the north had already mastered and occupied the Kola Peninsula, as well as the coast of the White Sea. At the same time, they constantly had with varying success to repel the raids of “Murmans”, who not only plundered settlements of Novgorod, but also tried to push our ancestors from the shores of the northern seas, so that the Russians could not trade with European countries. "Murmans" appeared on the White Sea, detachments from 500 and more warriors on the stitches, holding up to 10 armed men. Regardless of the weather and time of day, Novgorod, wise with military experience, constantly had outposts that warned of the appearance of enemies. Russian combat units entered the battle, and the inhabitants of the settlements, who did not participate in the battles, took refuge in the forests. There were no prisoners in such fights, and the Murmans knew this very well. The appearance of a new gunshot weaponswhich equalized the forces of a physically strong trained warrior, an old man and a young fighter, could lead to the victory of the Novgorodians or their complete destruction by the Murmans in this territory. To strengthen their positions on the White Sea, already in the 30 of the 15th century, immigrants from Novgorod, who later became saints, Savatiy, Zosima and Herman laid a monastery on the islands, which in 1552 was called the Solovetsky Monastery. Every year the number of German and Swedish ships on the White Sea increased. These were not trade visits, but military raids in order to eliminate all the settlements of Novgorod. Therefore, in 1571, the abbot of the Solovki monastery, Barlaam asked Tsar Ivan IV for protection. And this defense was rendered without delay, voivode Mikhail Ozerov arrived with a detachment of archers and artillery to the monastery. The provision of the detachment was attributed to exercise through the governor of the nearby jails. The preparation of the monks and the locals in the possession of firearms began, but there was not enough time for this preparation and the formation of detachments in the volosts. Therefore, in the clashes with the invading numerous detachments of the Kayan Germans, the archers and the voivode of the Lakes arrived. The news of this defeat quickly reached Moscow and Novgorod. Immediately a reinforced detachment led by commander Andrey Zagryazsky was sent to the monastery. The fighting with the Kayan Germans and the Swedes turned around with a new force. In winter, under the leadership of the governor Kipriyan Onichkov, as a result of defensive-offensive actions, the mixed Russian units defeated the three thousandth Swedes invading Kem parish. The whole of this victory reached the Russian Sovereign, the governor, in addition to gratitude, was instructed to bring to death all the enemy spies and prisoners captured in battles. The enemy must know what punishment will be waiting for him during the invasion of the Russian lands. There will be no mercy. In 1582, the governor Onichkov was replaced by voivode Ivan Okuchin, and a year later the construction of the port of Arkhangelsk began, through which the Russian state intended to conduct permanent trade with all European countries. Arkhangelsk reliably covered the enemies of Vologda and the Solovki monastery from attack, the strengthening of which became a special concern of the Russian Tsar. In accordance with the tsar's letters, the monastery was granted individual parishes in the north of the country; it was granted the right to transport strategic cargo along Dvina, to collect taxes, taxes and duties to receive funds for the development and maintenance of military units. Since the end of the XVI century, the rulers of the Scandinavian countries began to recognize the abbot of the Solovetsky Monastery as the only commander in the north of Russia. This monastery became a strategic center for the protection of the northern regions of the Fatherland, his troops first met the enemy and fought him until the main forces approached. The abbot of the monastery owned the "cross and sword." After the death of Ivan IV, Sweden began a war with Russia over the tearing away of Russian territories and closing the possibility of the exit of the Russian state to the sea borders. The monarch gave the Swedish army an order: “to burn and devastate the Russian lands, population, livestock and prey to deliver to Sweden”. Such a war was aimed at the enslavement and extermination of the Russians in the North. The voivods of Yakhontov, Yurenev, Khaletsky, the Volkonsky brothers, who arrived from Moscow, not only defended the Solovetsky Monastery, Arkhangelsk, but also cleared the Swedes of the seaside northern volosts. The last Moscow commander who defended the monastery was Timofey Krapivin.

Interesting fate also gave история another Russian monastery of Russia - Zaikonospassky, located in the very center of Moscow, near the Red Square. In coordination with Patriarch Iov, Tsar Boris Godunov completed the construction of the monastery in a short time, and in 1600 the church in the monastery was consecrated. At the initiative of Boris Godunov, an interesting program for the development of Russia was developed. In accordance with this program, foreign scientists attracted to the country, architects, began construction and expansion of Voronezh, Belgorod, Yelets, Samara, Tsaritsyn, Arkhangelsk, construction of the Smolensk fortress wall began. Military expeditions were sent to Siberia to develop new lands. Changes also occurred in Moscow. New fortifications were erected, the appearance of the White City inside the Boulevard Ring was transformed, a water supply system was put into operation in the Kremlin, and the bell tower of Ivan the Great was erected, which exceeded all buildings in Russia. The most talented young people began to go to study at foreign universities, opened schools in the capital, where learning to exact sciences required mastering foreign languages. Russia did everything to become a stronghold of the Orthodox Church and live according to the principle “Moscow is the third Rome”. The period of troubled times crossed out much of what had been achieved earlier in the expansion of the country's territory. With hard times it was finished with the arrival of Minin and Pozharsky. After the expulsion of the enemies to the Russian throne, Mikhail Romanov was elevated. The Zaikonospassky monastery gradually began to strengthen. Under Tsar Fedor Alekseevich, it was decided in this monastery to create a Slavic-Latin-Latin Academy in the development of science in Russia. Immediately, scientists from the Ukraine and Belarus began to represent their candidates for this educational institution, who preached at the Kiev-Mogilev Academy. However, on the recommendation of Patriarch Constantine Dionysius, the brothers Likhuda Joanikiy and Sofroniy were recommended to the tsar for organizing the first Academy in Russia in Zaikonospassky monastery. A week before the brothers arrived, Patriarch Joachim consecrated the Academy building, which was prepared for classes. There were many students at the Academy, young people were drawn to knowledge. According to the program of a higher educational institution, it was necessary to study: grammar, poetry, rhetoric, logic, physics, and mathematics. The brothers at the Academy conducted studies in Greek and Latin. Among the students of the Academy there were outstanding scientists: Fyodor Polikarpov, a Russian writer who learned to read more than one generation of citizens of Russia according to the primer, Leonty Magnitsky, the author of a textbook on mathematics and one of the founders of the Moscow navigation school, Pallady Rogovsky, in the world of Raev, the first Russian doctor of philosophy and theology, Mikhail Lomonosov was also a student of the Academy. After some time, the Academy became the basis for the creation of a university in Moscow. The Likhud brothers, in gratitude for the wise state policy pursued through the monastery, contemporaries erected a monument in Moscow. Currently Zaikonospassky monastery operates. His rector, Father Peter, pursues a policy of supporting universities and moral education in Moscow not only for the parishioners of the monastery church, but for residents of the whole country. The male choir of the monastery is widely known in many countries due to the amazing performance of patriotic songs. The monks and the abbot of this monastery in 1812 managed a few hours before the French entered Moscow, to warn the hussars, which were sent by the commander of the rear-guard of the Russian army, General MA. Miloradovich. Gusar rode into the monastery, jumped off his horse, crossed himself three times to the temple, and shouted loudly: "Father Sergius, an urgent message from General Miloradovich!" The rector came out of the temple, he crossed the hussar and said: "I listen, my son." "General Miloradovich asked you, the students of the Academy and the monks to leave, as soon as possible, to Tver." So the future Honorary Member of the Academy of Sciences of Russia, Governor-General of St. Petersburg MA. Miloradovich saved the Russian Slavic-Greek-Latin Academy from the barbarians.

PS .: At the present time, it would be advisable to consider the possibility of creating, at certain monasteries, “Nursing Homes” for citizens of Russia, “Children's Homes” and aiming excursions to familiarize ourselves with the life of our Orthodox monasteries. In this case, the possibility of stealing funds for the care of the elderly, and bullying children who today have the misfortune to be in some “orphanages” would have been excluded.

Ctrl Enter
Noticed oshЫbku Highlight text and press. Ctrl + Enter
We are
Sixth columnDo not chop off the roots of Russian culture
16 comments
Information
Dear reader, to leave comments on the publication, you must to register.