Something about the economy of the Soviet cosmos 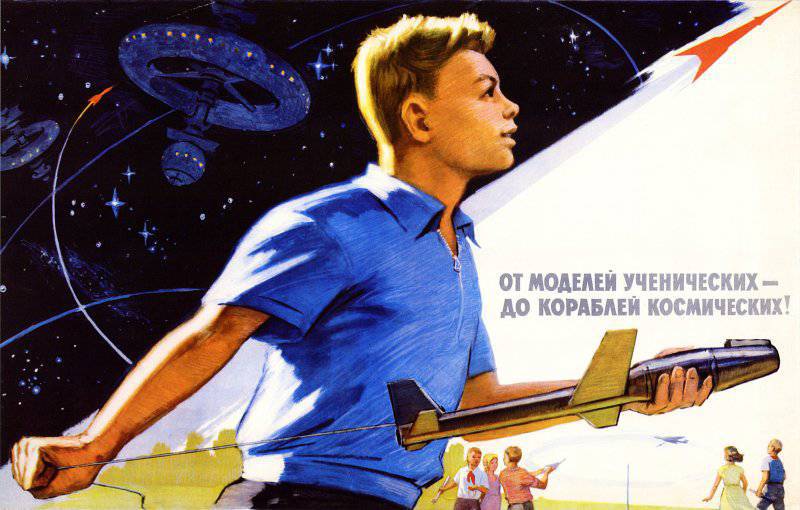 20 years ago, in the days of rampant restructuring and new thinking, the point of view was very popular that space programs are devastating for the country and do not bring any economic effect. It was because of space that an ordinary citizen could not enjoy the beauty of a ferry in a store of fifty varieties of sausage with twenty beers.


I remember well how being a guest in Moscow in 1990, I read the program of a certain B. Yeltsin, one of the points of which was (I quote from memory) “a complete stop of all space programs on 5-7 years”.

But is it? Can it be better to leave emotions aside and look at the facts and figures?

So how much did the space program cost the Soviet Union and what was the return (or profit) from it for the national economy?

I once wrote out the brochures of the society "Knowledge" "New in life, science, technology." There was a series about the space program "Astronautics, Astronomy". Most of course were lost over time, but something still remained.

So, in 1990, in issue No. 4 under the significant name "Where is the Soviet cosmonautics going?" cited data on the economy of the Soviet space.

So what is debit credit?

In the 1989 fiscal year, 6.9 billion rubles were allocated to space programs in our country, including for national economic and scientific, as well as defense purposes - 1.7 and 3.9 billion rubles. respectively. In 1.3 billion rubles. doing work on the "Buran". From these figures it is clear that the specific consumption per capita of the country - 24.6 rubles per year

These figures speak for themselves: it is clear that the multibillion-dollar spending on peaceful space, about which we have begun to write, is nothing more than a myth - they make up only 0.26% in the national income of the country. For comparison, we note that this value is 10 times less than the expenses of the Ministry of Water Resources alone in the same year and 5 times less than the assistance that the Soviet Union provides to other countries free of charge.

To go nuts. It turns out that with the money allocated to the monkeys in exchange for their promises to build socialism on individual palm trees “free aid”, it was possible to execute another 4 space program!

For reference. The expenditure part of the USSR budget for 1989 a year amounted to 465.1 billion rubles.

And here is something else about the latest Energy-Buran system at the time.

So, in 1989, the Soviet press finally published reports of work on the creation of a heavy H-1 rocket. If these works, for which about 2.5 billion rubles were spent, were not a willful decision in 1974, at the final testing stage would have been terminated, then today's Energia launch vehicle would not have to start from scratch.

The heads of the ministry published in the mass press the costs associated with the development of Energia-Buran. 16 billion was invested in the creation of the system. over 14 years. The cost of the design of the launch vehicle Energia and the orbital spacecraft Buran during the first launch, respectively, of 210 and 140 mln. Rub.

Figures are published: the costs of the expedition of A. Serebrov and A. Viktorenko with the duration of 6 months amounted to 90 mln. Rub. This means that the cost of the flight of the Mir station during 4 years was at least 360 million, and the cost of its development and experimental equipment is not taken into account.

I will add. The construction of the future of Baikonur in the middle of 50-s was allocated 500 million rubles. (The budget of the USSR in 1960 amounted to 77.2 billion rubles).

What about the payback of a space program? Such data are also given.

For example, in 1988, income from the implementation of these programs generated an income of about 2 billion rubles. It is important to emphasize in which areas of national space research a profit has been made.

According to the Ministry of Communications, the economic effect of the operation of Orbit, Ekran and Moscow satellite communication systems in 1988 was 540 million rubles. Satellite meteorological systems make it possible to reduce the damage caused by natural phenomena by approximately 500 - 700 mln. Rub. in year. Comprehensive studies of natural resources from space give the economic effect of 350 mln. Rub. annually. According to the estimates of Glavkosmos of the USSR, in the near future this value will increase to 1 billion rubles. Space images allow, for example, improving the quality of geological surveys, facilitating the search for new mineral deposits and reducing the cost of regional exploration for 15 - 20%.

Space mapping provides the opportunity to optimally choose the most economical and environmentally friendly options for civil and industrial construction projects. At the same time, this allows 2 - 3 to reduce the cost of field surveys. Estimated at 1 rub. the cost of space images get 5 rubles. arrived.

The national program for creating space technology for scientific and national economic purposes was published in an extremely concise statement only in a special advertising brochure "USSR in space. 2005 year", commissioned by Glavkosmos, as well as in some newspapers (for example, in the Red Star for 23 and 25 August 1989 g.). The cost of this program for three five-year plans is 40 billion rubles. Neither the Supreme Council nor its commissions have yet considered this program.

In 1988, the revenues received from the peaceful budget of the space program for the first time exceeded their expenditures (recall figures: 2 and 1.7 billion rubles, respectively).

So, it turns out, cosmonautics was even very profitable! Yes, it became so not immediately, but after 30 years after the launch of the first satellite. But forgive me, in order for something to start making a profit, first you have to invest expenses in this very thing. And by the way, the cost of capital construction also does not pay off in one decade.

In the Soviet Union in the thirteenth and fourteenth five-year plans in this direction is expected to perform a large amount of work. Space systems for economic purposes with improved technical characteristics will be put into operation. We are talking about promising connected satellites "Granit", "Helikon", "Informer". With 1992, it is supposed to provide with the help of satellites the transmission of television programs throughout the country. Direct television satellites for home receivers will start functioning. In the next two five-year periods, it is assumed that satellite communication systems will provide revenue for 4.1 and 5.6 billion. respectively.

New geodetic satellites are being prepared for launch intended for high-precision global and regional networks and for determining the parameters of the Earth's gravitational field. In the future, it is intended to ensure the accuracy of determining the coordinates in tens of centimeters. Work will continue on space mapping.

It is planned to put into operation prospective navigation satellites of the Glonass system, which will include 24 satellites located in three 7 orbital planes - 8 satellites each (some of the satellites are redundant). This system will ensure the accuracy of determining the coordinates of vehicles up to meters and speeds up to centimeters per second. Work is underway to create a more sophisticated search system and the Nadezhda-M fear. Prospective navigation satellites will give the economic effect of 0.8 and 3.8 billion rubles. in the thirteenth and fourteenth five-year periods, respectively.

It is planned to launch new meteorological satellites in the geostationary orbit Electron, equipped with television equipment operating in the visible and infrared spectral regions. This equipment will allow to determine the global distribution of clouds on the illuminated and shadow side of the planet, the speed and direction of the winds at two or three levels of the atmosphere. It is estimated that 1991 - 1995's. Meteorological and environmental satellites will provide income for 5.8 billion rubles, and for 1996 - 2000. - 9.6 billion

New satellites will be introduced to study the Earth’s natural resources (Resource, Ocean, etc.). They are associated with obtaining practical recommendations for geology, agriculture, forestry, water and fisheries, for land reclamation, oceanography, urban planning. It is expected that the use of these systems in the national economy will give 4,8 and 5,8 billion rubles in the thirteenth and fourteenth five-year plans.

Thus, in the sum of 10 years (from 1991 to 2000), the listed national economic research directions of space research will bring in about 42 billion rubles. Note that this figure does not include the profit that space mapping will provide - the authors did not have the relevant data.

I think that after this you can safely spit in the face to all the criminals about the "ruinous and unnecessary space program of the USSR" and send them on a trip in three coordinates (X, Y, but what instead of Z - guess yourself, not small).

ZY I read the brochure now, and I can't calm down. If it was planned for 2000 year, what could be today?