People are nothing without fighting spirit

29 May 2013
29
Due to human losses, fewer battles are lost than due to the loss of spiritual strength.


The Military Doctrine of the Russian Federation, approved by Decree of the President of the Russian Federation No. 146 of February 5 of 2010, states that a large-scale war will require the mobilization of all available material resources and spiritual forces of the participating States. In the course of mobilization, a complex of measures is being taken to transfer the economy, state authorities, local self-government bodies and organizations to work in wartime conditions, and the Armed Forces - to the organization and composition of wartime.

The whole population of the country participates in the mobilization process. The quality and organizational capabilities of the authorities depend on its spiritual and moral condition, along with other factors.

Russian public figure Lev Tikhomirov, speaking of the development of the nation, writes: “... the nation must be able to develop all the spiritual and material strength available to it. The basis and driving force of development in the nation, as well as in man, is at the same time its spiritual strength. ”

Spiritual strengths in the war years, when the state mechanism as a whole and every person is under tremendous physical and psychological stress, acquire particular importance. 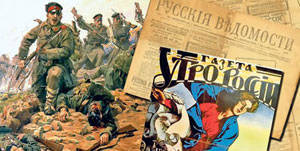 The highest tests went to Russia during the two world wars. To varying degrees, they showed how the state was able to mobilize spiritual forces and withstand the difficulties of wartime.

By the beginning of the First World War, the Russian empire approached with impressive successes in the economy and the social sphere. The country has increased its vitality through natural population growth. In terms of the growth of industrial production and labor productivity, Russia came out on top in the world; it was almost independent of imports.

However, the growth of material well-being was not accompanied by a noticeable spiritual growth of society and the spiritual schism between the upper intelligentsia and the people deepened in it.

The beginning of the war was perceived by the majority of the people in the countryside in silence and with dignity, as the fulfillment of their civic duty to the Fatherland, and the townspeople in the large cities - by violent enthusiasm and patriotic demonstrations. It would seem that here it is the union of the intelligentsia and the people, so necessary for the mobilization of the spiritual forces of the state. But the rapture was quickly replaced by a different mood.

As a result, a revolution was chosen precisely at the moment when the country was militarily and economically ready to end the war with a victory over an exhausted opponent who was already searching for peace.

To a large extent, this state of affairs was already promoted during the First World War by the absence of some restrictions characteristic of the imposition of martial law, that is, the organizational resource was not fully utilized.

First, it refers to the system of state power, which has not undergone significant changes associated with the transition to work in wartime conditions.

The executive branch has managed to mobilize the country's economy, strengthen state regulation and, without a radical breakdown of economic relations, achieve rapid growth in military production indicators.

The contribution of representative power to the cause of war is characterized differently.

In the State Duma, during the war years, the situation changed dramatically, from calls for rallying “around the sovereign leader” at the beginning of the war to slander and disobedience. At an emergency meeting of 26 on July 1914, the bills on financial matters during wartime that were necessary for warfare were adopted, but already then the slogan “War to War” sounded shyly.

Subsequently, as the situation on the front deteriorated in the Duma, anti-government sentiments began to prevail. In August, the Progressive Bloc was created within its walls of 1915, the purpose of which was to fight the government, which led to the commission of a coup d'état.

In the summer session of 1916, the representatives of the bloc proposed a number of bills on Zemstvo reform, on societies and unions, on the Zemstvo and city All-Russian unions, and this clearly indicates their inopportuneness for the belligerent country.

1 November 1916, at the Duma meeting, there are already threats against the government, statements are made with accusations of treason. After the dissolution of 26 in February of 1917, she creates the Provisional Committee of the State Duma, which forms the Provisional Government, which turned out to be incapable of either waging a war or engaging in economics, unlike the one that was overthrown.

Thus, the representative body became the center from which actions proceeded, leading not to the consolidation of society for victory over an external enemy, but to arousing it to fight with the executive branch.

Secondly, with the good purpose of helping the front, public organizations — the All-Union Union and the Union of Cities (Zemgor), the Military Industrial Committee, besides their main activities, dealt with political issues, discrediting the government, although they worked for money only from the state budget. At the front and in the rear, they carried out propaganda against the government, strongly emphasized their usefulness and did not hesitate to present with their merit what was done by the executive branch.

The experience gained by the country in the First World War, including examples of the activities of representative bodies, public organizations and the press, was taken into account in the years of the Great Patriotic War.

In accordance with the Constitution of the USSR 1936, the supreme body of state power was the Supreme Soviet of the USSR. On the very first day of the war, the Presidium of the Supreme Council issued a decree On Martial Law, which imposed a number of restrictions, and on June 30, a joint resolution of the Presidium of the Supreme Council, Council of People’s Commissars and the Central Committee of the CPSU (B.) Was adopted by a joint resolution of the State Defense Committee (T-bills).

In this management body concentrated all the fullness of state power. Citizens, party, Soviet, Komsomol and military bodies were obliged to unconditionally implement the decisions and orders of the GKO.

The Supreme Council and the Presidium of the Supreme Council continued to function, but in fact all power was in place with a body specially created to ensure strict centralized leadership of the country during a period of martial law.

Even the very possibility for the activity of any opposition was excluded, if suddenly it appeared in a period of difficult situation at the front, in the conditions of the loss of vast territories, material resources and people.

Speaking about the state of society on the eve of the Great Patriotic War, some authors say: “In the USSR, there was a spirit of militancy, readiness for military and labor feats ...” (V.N. Zemskov). Others say exactly the opposite: “Soviet society approached the beginning of the war in a difficult spiritual state ...” (S. V. Bolotov).

However, it cannot be said that in the course of the war in the face of general danger, national unity was not achieved and the state failed to mobilize all the country's spiritual forces to achieve victory.

An example of this is the address of the Patriarch's locum tenens, Metropolitan Sergius (Stragorodsky), made on the first day of the war, even before officials turned to the people. "The miserable descendants of the enemies of Orthodox Christianity want to try again to put our people on their knees," he wrote and expressed the firm confidence of the Russian people in the upcoming victory: "With God's help, this time too, he will dispel the fascist enemy force."

These words did not go unnoticed by the leadership of the country. 3 July 1941, the chairman of the State Defense Committee Stalin made a radio address to the Soviet people to make it clear that one can win a war only in the unity of comrades, citizens, brothers and sisters and turning to the spiritual potential of Russia.

“Let the courageous image of our great ancestors — Alexander Nevsky, Dmitry Donskoy, Kuzma Minin, Dmitry Pozharsky, Alexander Suvorov, Mikhail Kutuzov — inspire you in this war ...” he said at the 7 military parade on November 1941 of the year.

The experience of two world wars clearly shows that the outcome of the war depends on the state of the spiritual forces of the state, which give the people unity, the ability to survive and win.

However, the federal law “On Defense” is silent about them, although it would be quite expedient to define the state’s defense power, which is a combination of constantly existing material resources and spiritual forces, in this regulatory legal act.

Ctrl Enter
Noticed oshЫbku Highlight text and press. Ctrl + Enter
We are
Some issues of mobilization of the spiritual forces of the stateMilitary reform as an integral part of the security concept of the Russian Federation: Systematic dynamic assessment
29 comments
Information
Dear reader, to leave comments on the publication, you must to register.