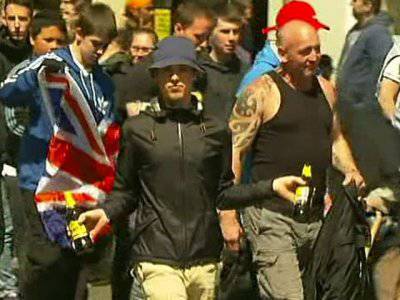 Two war memorials in the British capital were subjected to acts of vandalism. Unknown hooligans wrote the word "Islam" on them. According to ITAR-TASS, the memorial to British bomber pilots became targets of malefactors. aviation World War II, located in Green Park near the Royal Buckingham Palace, and the Animal Monument in the War on Park Lane, next to Hyde Park.


Police suspect that Muslim radicals were vandals. Perhaps this trick was a reaction to the exacerbation of relations between ethnic and religious groups of the British population after the brutal murder of soldier Lee Rigby, committed on Wednesday in London by Islamic fanatics. This crime has led to an increase in tensions between the ultra-right among the native Britons and religious fanatics within the Muslim community. Cases of attacks on mosques have been reported in various parts of the country.

The murder of Lee Rigby, we recall, was committed by two young Britons of Nigerian descent who fell under the influence of the al-Qaida ideology. One of the alleged terrorists said that the crime was a revenge by the British military for fighting in Islamic countries.

Ctrl Enter
Noticed oshЫbku Highlight text and press. Ctrl + Enter
We are
In the Ivanovo region opened a memorial memorial in honor of the designer of tanksLibya insists that Niger change its decision on political asylum for Gaddafi’s son
46 comments
Information
Dear reader, to leave comments on the publication, you must to register.