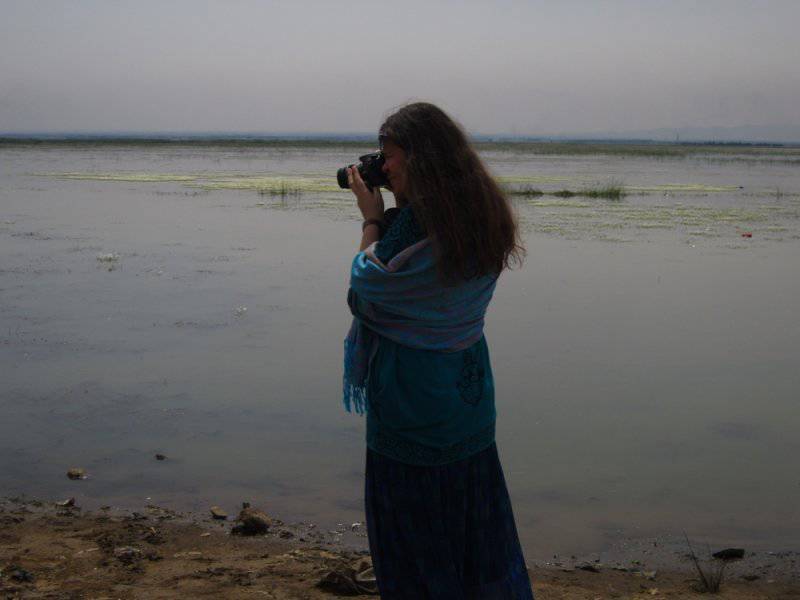 Not far from Homs there is a small village of Osh Al-Barbarian. More recently, it was under the control of terrorists, and now the army has liberated a large area between Homs and Al-Kseir, including this settlement, where terrorists held Ukrainian hostage Ankhar Kochneva, a journalist and translator, for five months in captivity with their reports from suffering but not broken Syria. 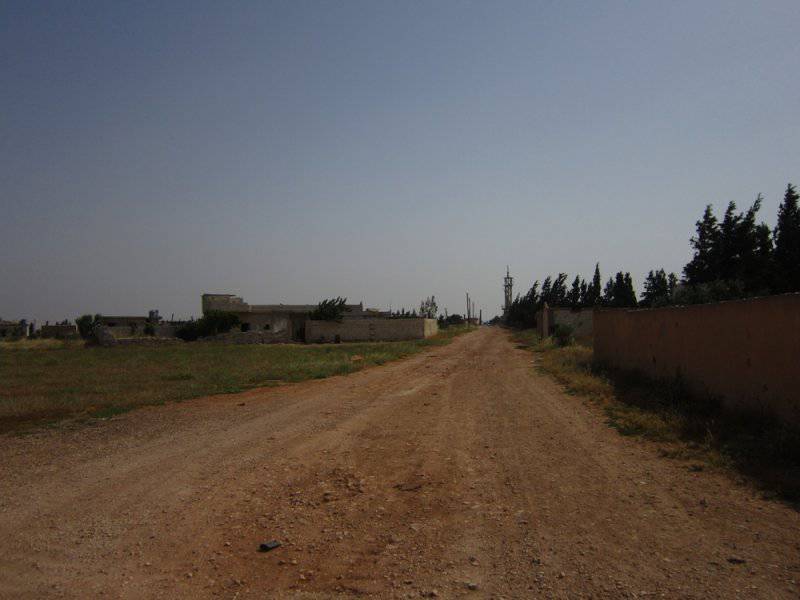 The name of the village at first seemed ominous to me and caused an association with ancient ruthless barbarians - all the more so since recently modern barbarians reigned there, called “fighters for democracy” and supported by the West. But in fact, in Arabic it is just a “bird's nest.” And it looks like something usually, almost like Russian abandoned villages - only houses are not made of wood, but made of stone.

In Syria, many houses are built so that there is an opportunity at any time to make the second and subsequent floors. Families are large, many do not know in advance how many children they will have and what size the house will need in the future. That modest house, where Ankhar Kochnev was held captive - just that - a modest, unremarkable, looking like an eternal “unfinished”. 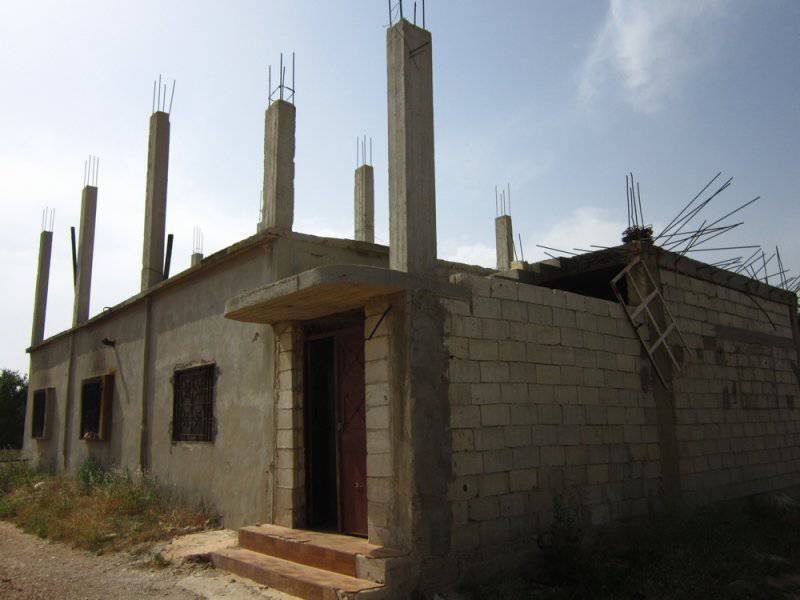 Anhar leads a group of journalists to the house that the bandits used as her prison. When cleaning, he practically did not suffer - shells did not please him. But there was a fire in the room where Ankhar was kept, as well as in the next room where her captors lived. Perhaps the terrorists themselves, retreating, set fire to the house, or it could have hit an incendiary rocket. Now among the black ashes are the objects that the captive herself and those who protected her were lying about. 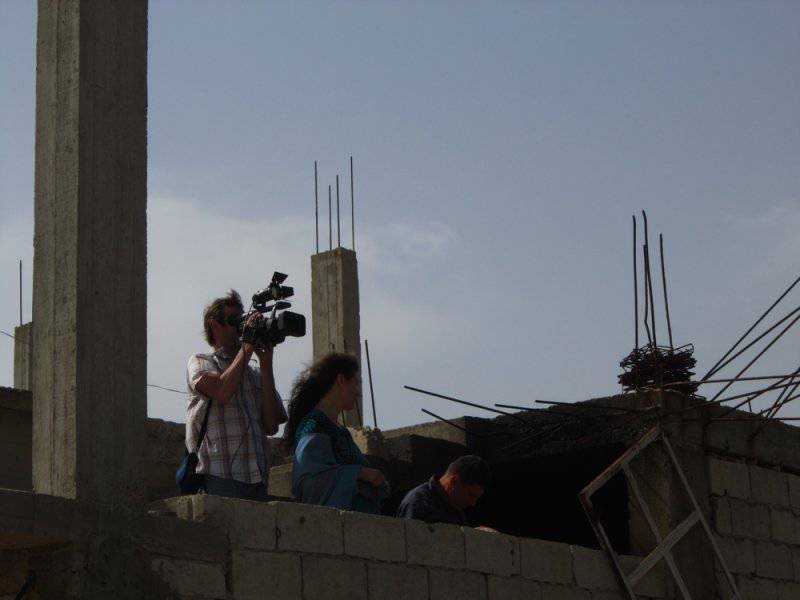 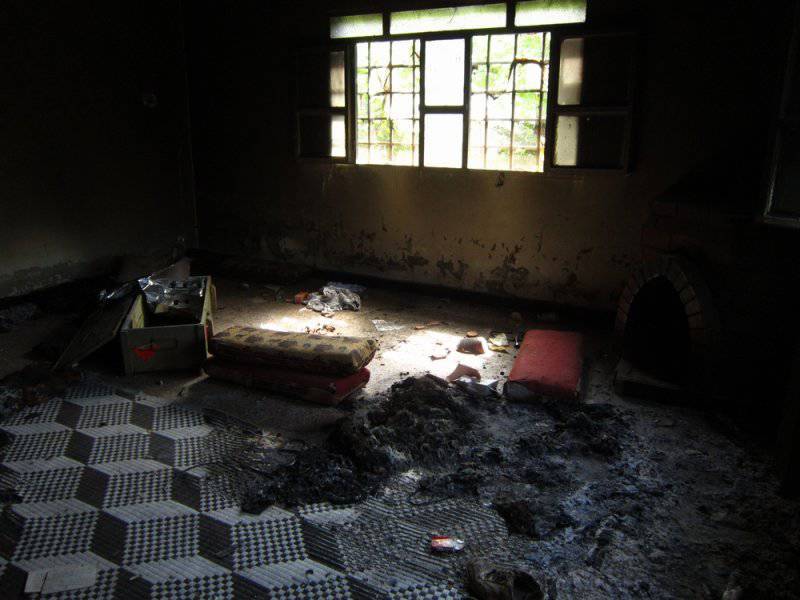 Miraculously escaped to freedom a hostage remembers her guards. They were members of the so-called Faruk Brigade, which turned life into hells in Homs and the surrounding area into hell. According to her, not all of them were dreaded scumbags - there were people who "did not suffer there." In particular, she attributes to them the leader of the group, Ammar, who did not allow his militants to bully the kidnapped. There were those who became hardened because they wore more than a year weapon. But there were also frank sadists: one of them, firing a pistol, drove her away from a warm stove on a cold winter day. Another - forced to jump from the roof of the captive Shiite, despite his pleas and fear of breaking his legs. (Togo captive was later bought by relatives for a large sum of money).

The same group, but in a different place, was held in captivity by two Russian citizens and one Italian, who were subsequently exchanged for ten arrested militants. She did not see them, but she heard about them in the conversations of the guards.

In a house turned into a prison, there was once a peaceful life, the same as in the billions of little houses scattered around the globe. This is evidenced by an abandoned sewing machine in a room that the terrorists did not use. Then this and the neighboring house (already much more) Ammar and his accomplices "rented" for themselves for a ridiculous amount: the owners did not have the opportunity to bargain too much, because the assault rifles in the hands of terrorists do not contribute to such bargaining. 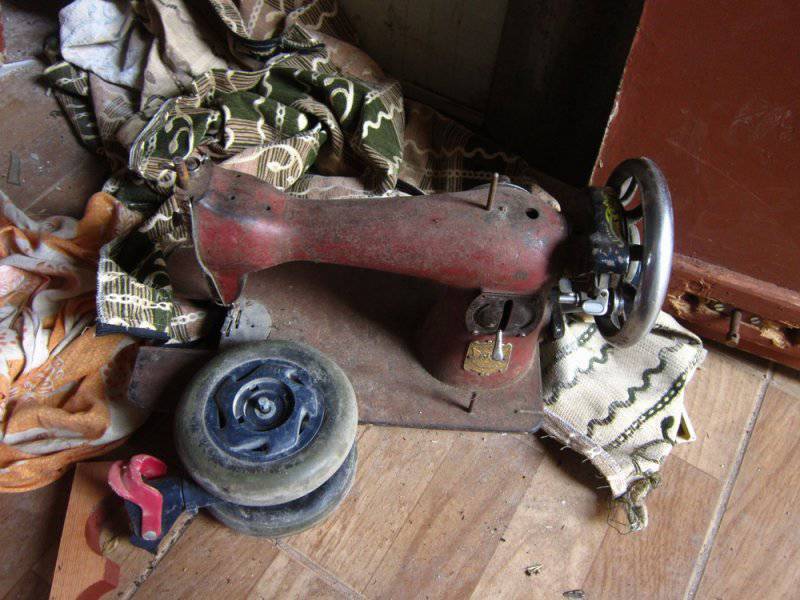 I had to see in the same Homs many houses and apartments in which everything breathed its former, peaceful life - until Syria hit the "democratizers". I had to see the library turned into a torture chamber. Mosques and schools, turned into headquarters. And often the bandits brought prisoners there who were no longer destined to go out.

Anhar was lucky. After five months of imprisonment, she managed to outwit her captors. “The risk was terrible,” she says. “Right here,” he points to the neighboring house where the leader of the group was located, “there was their checkpoint, and if someone was there, they would have caught and, at the very least, severely beat them.” But they lost their guard, and they managed to deceive.
Thus, she confirmed the old truth - if the guards can, bored, think about anything, then the prisoners think only of freedom. 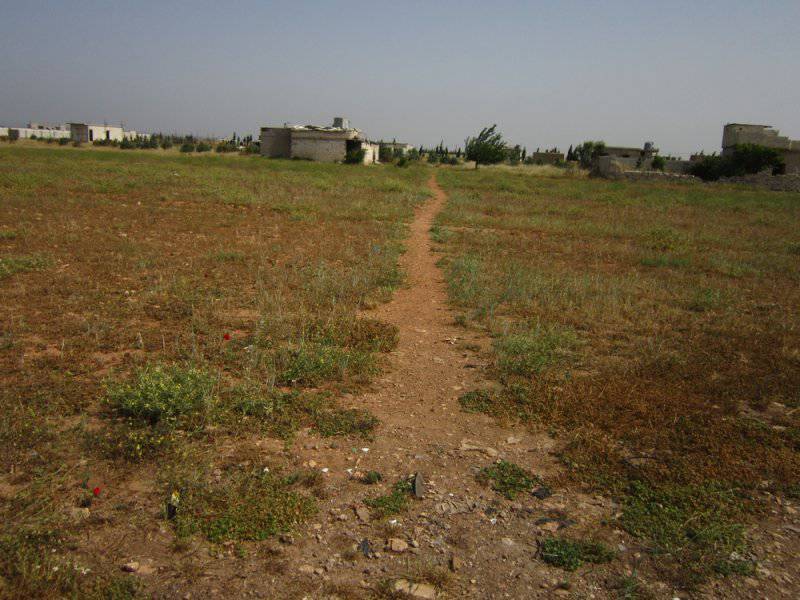 And here it is - freedom. But before the fugitive there are three roads. One of them leads to Lebanon. The distant mountains turn blue. The other is an enticing footpath, where, it would seem, there are buildings beyond which you can hide. The third leads to the old mosque, which could also have a roadblock.

As Anhar said, she wanted to run either to Lebanon, or on the second road, but her intuition led her to the third, the most dangerous one. Militants could not guess that she would go exactly there, and then combed the terrain in two other directions. “If I went in the other direction, they would kill me,” says Ankhar. To disguise, she took a can so that, if random people saw her, they would have thought: “Well, the woman went for milk.”

Having traveled 9 kilometers, she met an elderly man, who at first was apprehended with caution. But he noticed her, and there was no way out. “My life is in your hands,” said Ankhar, and she was lucky - it was a man from the village of Al-Ghassania. Before clearing the territory, this village was one of the few free of bandits. Its inhabitants managed to repel the attacks, and the terrorists were already afraid to go there. The hostage who fled from the enemies helped. 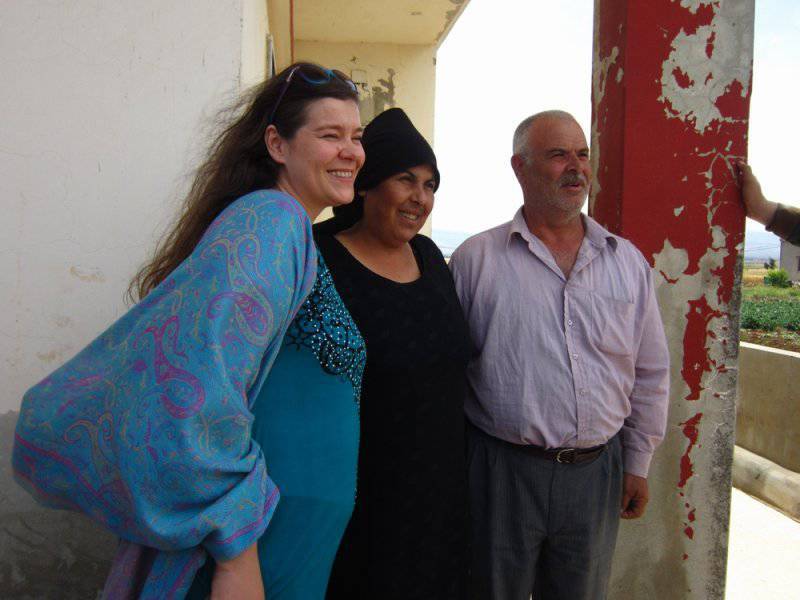 Savior Anhar was glad to see her again. He said that then, as an elder of the village, he was called by one of the leaders of the rebels, Navvath, who threatened and demanded to extradite the fugitive. But the people in Gassania are true Syrians, true patriots who don’t give up theirs. The other person who participated in the rescue of the Ukrainian woman was offered 50 millions of Syrian pounds for her — after all, the terrorists wanted to get much more in dollars for her. But - not passed. Honor and praise to these people who have refused dirty money and have not been afraid of threats.
Then she was transported across the lake by boat.

And there is already a territory firmly controlled by the army. Not far away - homs. Oil refinery, on the territory of which a huge torch was built. “I saw this burning torch from the window every night, and it was painful to realize that very close to normal life,” said Ankhar. 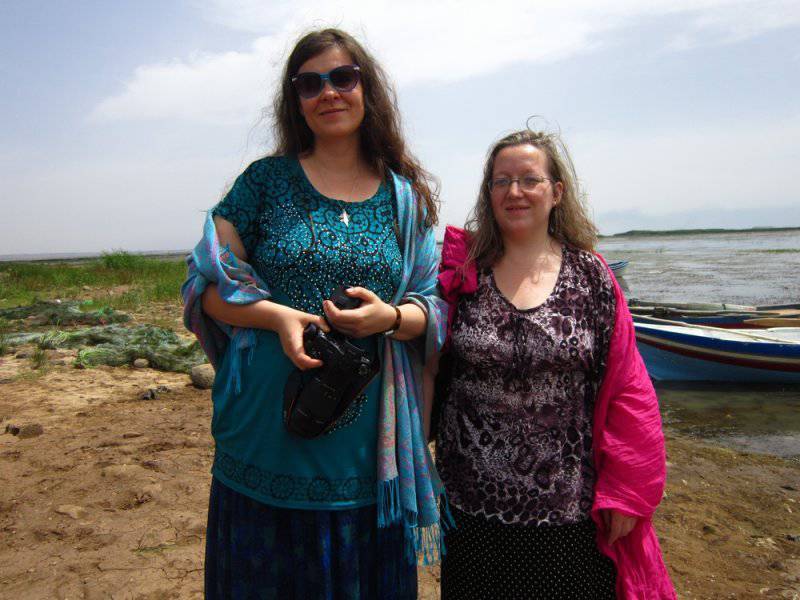 And here we stand on the shore of this lake. Distant breaks are heard - this Syrian army continues a special operation in the city of Al-Kseyr. It was there that those who held Ankhar hostage now dug in. The same terrorist who treated her harshly and threatened the people of Al-Ghassania is already eliminated.

We're going ... And here we are - on the outskirts of Al-Xayra. Currently, southern areas are under state control. In the northern quarters are surrounded by militants from the "Brigade Farouk". When they manage to go on the air - they cheer up. But their case is lost. It was lost initially - when they raised their hands to their country, when they uprooted the peaceful life of millions of people, when they bought into the sweet promises of the West. When they turned houses into prisons, when they abducted women, when they invaded peaceful villages ...

PS While I was writing this article, I received a tragic message. The journalist of the Al-Ikhbariya Syrian television channel Yara Abbas was killed. The last time we saw her was in Homs when we traveled to Al-Xayr. But in the end we went there on one road, she - on the other.

This girl was a friend of the well-known Syrian journalist Yara Saleh from the same TV channel, who was kidnapped by militants last summer and spent several days in captivity, while the Syrian army freed her together with the film crew. But one journalist from the group then died ... Earlier, in June of last year, a terrorist attack was committed on the office of the TV channel, as a result of which six employees of Al-Ikhbarii were killed ...