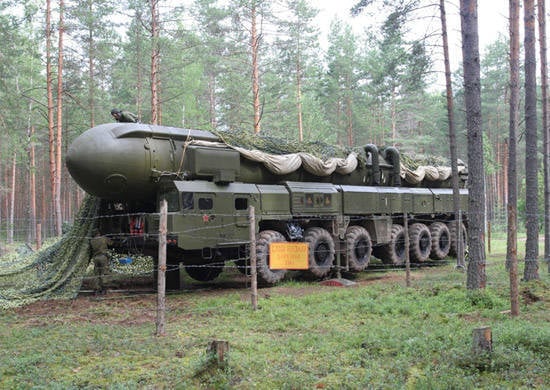 25 years ago - 27 of May 1988 of the year - in the Irkutsk missile compound, the first missile regiment with the Topol missile system and the improved Granit command center began to take up combat duty.


Development of the Topol PGRK with a three-stage monoblock intercontinental rocket RT-2PM began in the 1976 year. Flight tests at the Plesetsk test site were conducted in 1982 - 1988.

The PGRK was put on combat duty in four stages: with the stationary command post (KP) of the 23 missile regiment of July 1985 (near Yoshkar-Oloy); with mobile - 28 April 1987 (under Nizhny Tagil); with advanced mobile - 27 May 1988 (near Irkutsk); with the automated battle control system of the new generation - 30 December 1988 (near Teikovo).

Mobile CP is a command post mounted on the basis of special soil machines (command and control, communications, combat duty support). Mobile command posts in the Strategic Missile Forces provide control of combat missile complexes at field positions and on the march and have high mobility, secrecy of operation and the possibility of long-term operation in field conditions regardless of the season. The rocket launch can be carried out from field positions, from any point of the combat patrol route, and from the garage-type special structures with a retractable roof, which are located at the combat starting positions (at points of permanent deployment)

Ctrl Enter
Noticed oshЫbku Highlight text and press. Ctrl + Enter
We are
25 years ago, the first missile regiment with the Topol missile system and a mobile command center took over combat dutyThe second Yars missile regiment will take up combat duty until the end of the 2011 year
24 comments
Information
Dear reader, to leave comments on the publication, you must to register.