27 May 2013
13
Since people love everything unusual and more powerful, then I have them. Recently I came across another creation of the Japanese armory industry, and although this model can not boast of an original automation system or appearance, some of the solutions in it are quite interesting and unusual, and its ease of use makes shooting possible only if the fire is a true samurai, and in full dress. In general, while everyone realized that high armor-piercing can actually be achieved by reducing the caliber of a missile, the Japanese went their own way and made an anti-tank gun, in my opinion, absolutely unsuitable for military operations, although its armor-piercing characteristics were very high at that time not bad, but, as they say, not by bread alone. I propose to get acquainted with this type of weapon and maybe even sympathize with the Japanese calculations of anti-tank rifles, even though they fired from these rifles at us too. 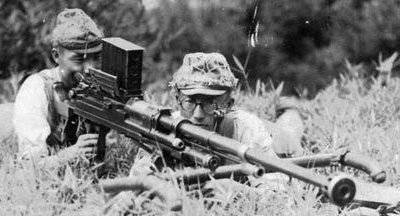 With the spread of the first tanks, which had, for the most part, thin bulletproof armor, appeared and proved to be effective PTR. In this regard, every self-respecting country tried to provide its army with such weapons. Unfortunately, the designers of anti-tank rifles, the tanks increased the thickness of their armor and the PTR very quickly lost their effectiveness, but no one thought to give up immediately, abandoning the use of anti-tank rifles in battle. The desire to make their weapons as effective as possible reached the point of absurdity and very often the proposed samples remained only experimental, because despite the rather high armor-piercing characteristics they had an unbearable weight, intolerable returns, and a small resource. In Japan, apparently, everything was decided to be carried through to the end, because there they decided to create their own sample of weapons, and when they saw what happened, they did not spit and forget, but put them into service and forced the soldiers to shoot from these weapons, and even wear it. But first things first.

Since the main characteristics of the weapon are determined by the ammunition, it was decided to create an anti-tank rifle based on a fairly powerful cartridge 20x125 from aviation guns. It is clear that the weapon under this cartridge should have been quite difficult, and the return from him should have been unbearable. They tried to take all this into account when designing an anti-tank rifle, although it was impossible to do the impossible. Judge for yourself. The weight of the armor-piercing bullet, if you can call it that, was 132 grams, which flew at a speed of 950 meters per second, which meant that the kinetic energy of the bullet was almost 60 thousand Joules. Unfortunately, nothing is known about the resource of the weapon barrel, and this question is personally very interesting to me personally. It was difficult to curb such energy, but the result from the use of such weapons was not bad. At a distance of 250 meters, such a bullet pierced 30 millimeters of armor, but it was much more effective to use this anti-tank gun as an infantry support weapon, since in addition to the options with an armor-piercing bullet, there were also variants with high-explosive shells.

It was naturally only possible to force a weapon to “eat” such ammunition if it was self-loaded. The fact is that any automation system at least a little extinguishes recoil when firing, which means that after each shot you do not need to carry the shooter for long-term treatment and look for a new one in its place. Decided to stop on the automation system with the removal of powder gases from the barrel. Two gas pistons of the weapon were located under the barrel of the anti-tank gun and were rigidly connected to the slide frame. The barrel bore was locked by two wedges that lowered in the forward position of the bolt carrier and engaged in the clutch with the receiver, preventing the bolt from rolling back. When fired, the powder gases pushed the gas pistons, and accordingly, the bolt carrier, which lifted the locking wedges and released the bolt.

In order to soften the recoil when shooting, the whole structure, together with the receiver, was able to roll back, compressing the spring located in the butt of the anti-tank gun. In addition, the barrel had a fairly effective muzzle brake-recoil compensator. But this was not enough. Cases of the clavicle fracture when firing from this weapon were a regular matter, and not only for the shooters making the first shots from this anti-tank gun, but also for those who had long been familiar with it. In other words, in order to fire such a gun, it was necessary to prepare for a long enough time, including morally. But the most important feature of the weapon was that it had the ability to conduct automatic fire, although it does not say anywhere about whether there was at least one person who decided to shoot in the queue, and notice this among people where ritual suicide was held in high esteem. Apparently, I did not like the new method. 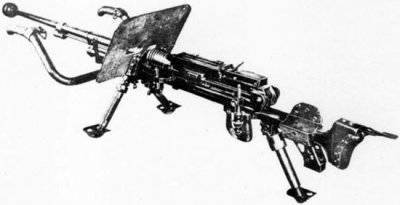 Laughing with laughter, but I personally find it difficult to imagine that they adopted weapons without interference from a potential adversary. In general, it is strange how the Japanese, who usually have a fairly modest physique, were controlled with such a unit. 68 kilogram of weight with a magazine, length of 2,1 meter with a barrel length of 1250 millimeters, huge returns when shooting ... Everything in this weapon required a good heavy machine, but it cost two bipods under the barrel and an extra “leg” under the butt. The problem of moving weapons was solved with the help of two carrying handles. It was interesting that because of the location of the front handles for carrying the weapon, an 3 man was needed, plus one more to carry ammunition, and the calculation of the anti-tank gun consisted of only 2 people. Plus, for shooting, the rear carrying handles had to be removed. In general, moving around the battlefield of calculating this anti-tank gun should have caused a lot of smiles from the enemy, well, the crew had to shoot the calculation with a mass of time. Another thing is that when the weapon began to shoot, it was no longer up to the smiles, even despite the low accuracy of the fire.