27 May 2013
10
From the previous article about the MAS-49 sniper rifle and its subsequent modernization, it became clear that the French army did not always have a sniper rifle weapons corresponding to the level of weapons of other countries. Despite the fact that most of the tasks the weapon could do, the ego's low effective range of fire, as well as not the best accuracy with a stretch, allowed the rifle to be called a sniper rifle. Naturally, the situation needed to be corrected, but re-equipping the army with a new weapon model, even taking into account the fact that usually a large number of sniper rifles are not required, would cost a fairly large amount, which naturally was not. Thus it turned out that the needs of the army in the new sniper weapons had to be met within a very small budget. What is remarkable, even despite this, the sample turned out to be quite interesting, possessing, albeit not the best, but quite good characteristics and at the same time quite simple. This is a French sniper rifle FR F1, well, at the same time we will get acquainted with its modernization FR F2.

The FX F1 FR sniper rifle was developed in 1964 under the guidance of Jean Fournier. This weapon by modern standards has a rather old appearance, and in comparison with its contemporaries, this rifle looks like an old woman. Despite this, the weapon is quite convenient, it has a lot of interesting and cheap solutions to many of the problems that can be found in modern weapons. Unfortunately, some of the solutions in this rifle can not be called successful. So first of all, the weapon forearm, which is not only rigidly attached to the barrel, catches the eye, so it is also connected to the barrel of the rifle, which reduces the accuracy of firing from the weapon, although judging by the reviews, this is not so critical, as 7,5X54 ammunition anyway, they do not allow to reveal the potential of a loose-weighted trunk, which means that it is not needed there. The butt of the weapon is also wooden, it does not have the ability to fine-tune its length, only by replacing the butt plate, but it can have an emphasis for the cheek. From the butt, separately downwards goes the same wooden pistol grip, which significantly increases the ease of controlling the weapon. It would seem a trifle, and this detail was noted as a separate plus weapon, making the main plus of a weapon out of a pistol grip. Rifle bipods are not fixed quite normally. Their mount passes through the wooden forearm, they fold forward and in the folded position are located on the sides of the weapon.

We should also talk about rifle shops. Unlike its predecessor, the FR F1 was fed from detachable stores with a capacity of 10 ammunition with double-row ammunition. In order to prevent dirt and water from entering the stores during transportation, the stores themselves were closed with rubber lids, which, when the store joined the weapon, were removed and put on from the bottom of the store, thus creating a comfortable support for the second hand shooter. New detachable stores of relatively large capacity were perceived with a bang, as they greatly increased the practical rate of fire of the weapon. Let me remind you that in the MAS-49 stores were integral and filled with clips.

Considerable attention was paid to increasing the rate of fire of the rifle, but financial limitations did not allow creating a self-loading sample, and many believed that this could lead to a significant decrease in the accuracy of the fire, and the training of snipers would have to be carried out according to a slightly different program. For this reason, it was decided to give preference to the longitudinal sliding gate locking the bore when turning. In order to increase the rate of fire, it was decided to place the battle stops on the bolt from behind, which reduced the stroke of the bolt. Also, a lot of attention was paid to the convenience of reloading, as evidenced by the shutter handle bent in all possible places, though you can't figure out how comfortable it is in the picture. 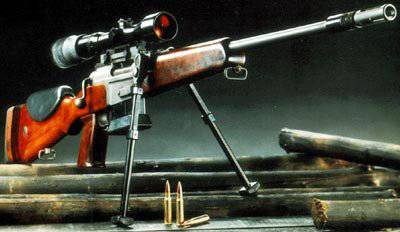 Despite the fact that they refused from automation in weapons, the result in the form of effective range was not the best, 600-800 meters for the rifle was the limit, and the location of the stops on the bolt and forearm on the barrel and not the best ammunition. In order for the shooter to hit the target at least at this distance, in addition to the optical sight, the rifle can also be used with open sights consisting of the rear sight and the front sight with marks of light accumulating paint, for ease of aiming in low light conditions. Optical sight, which is used with a weapon has a multiplicity of 3,5-4.

The total length of the FX F1 rifle is 1138 millimeters with a barrel length 600 millimeters. The weight of the weapon is 5,63 kilogram.

It cannot be said that the weapon fully satisfied all the requirements that were imposed on it, but it coped well with its tasks. Subsequently, after France joined NATO, and did not enter into a good deal, it was necessary to replace the ammunition, and therefore the weapon. At that time, it was possible to acquire a more modern model, which would have been self-loading and had the same characteristics, but, apparently because of the same economy, this did not happen. In 1984, an upgraded rifle, already named FR F2, was introduced. This weapon did not differ fundamentally from its predecessor, but much of it was changed. First of all, the absence of wood catches the eye, now both the forend and butt and the pistol grip are made of plastic, which not only had a positive effect on the cost of production, but also reduced the weight of the weapon. Rather, the weight of the weapon, on the contrary, became larger, but this happened because of the increase in the length of the barrel to 650 millimeters, as well as installing a casing on the barrel, so with wooden parts the weapon would have weighed a lot more. The total length of the weapon became 1200 millimeters, and the rifle's weight began to equal 5,77 kilograms. 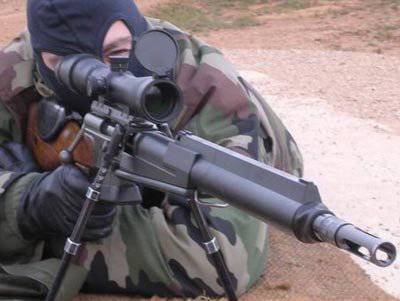 To increase the strength of the butt while reducing its weight, in order to be able to safely move the enemy into the jaw and not be afraid that the butt could be broken, a steel “skeleton” was embedded in its design, which was coated with plastic so that the butt inside was hollow but at the same time quite durable and light. The casing on the barrel is a simple plastic tube worn on the barrel of the weapon and connected to the forearm. Thanks to this simple addition, the weapon has become less noticeable to the thermal imager, moreover, this cover does not allow the warm air to rise from the barrel, which interferes with aiming. It is usually noted that this sniper rifle has no sights, but it is not. The simplest rear sight and front sight are located just on the trunk of the barrel, how comfortable they are and how far the weapon will be effective when using them can be judged simply by their appearance. So, in principle, we can really say that the weapon does not have open sights.

In addition, the method and place of attachment of the bipod of the rifle, which began to be mounted on the receiver, in front of the top, which added stability to the weapon when shooting, was changed. Replacing the ammunition and these simple innovations made it possible to use a rifle with a guaranteed result at distances up to 800 meters, but one kilometer remained a dream or success.

Ctrl Enter
Noticed oshЫbku Highlight text and press. Ctrl + Enter
We are
Sniper fire in local warsWhat should be a modern sniper (part of 1)
Military Reviewin Yandex News
Military Reviewin Google News
10 comments
Information
Dear reader, to leave comments on the publication, you must to register.