About promises and crimes 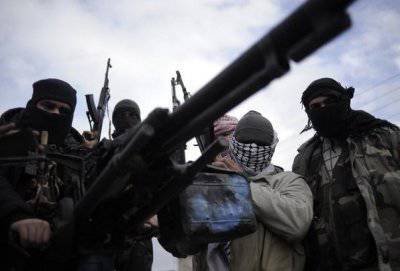 Terrorists fired at the factory


As soon as it comes to getting money from abroad by terrorists, they pretend to be “innocent sheep”. They promise to give up terrorism, to punish criminals in their ranks, then to stop kidnapping people. So, after the appearance on the Web of a video shocking the world on which the “rebel” cannibal eats the heart of a dead soldier, they immediately disown the cannibal and assured that they would punish war criminals. But in fact, the price of such promises is negligible.

Terrorists continue to fight civilians, kill workers. So, in the village of Mleha near Damascus 21 in May, they were fired at a garment factory "Vasim". It is hard to say what it didn’t please them, but the result is tragic - three workers died. The 24 person is injured, among them there are those who are in serious condition. Damaged building of the enterprise.

A major crime was prevented by law enforcement. On the road between the village of Harasta and the city of Damascus, two vehicles with explosives were found — one had 600 kg, the other had 700. A day earlier, another car with a ton of explosives was destroyed on the same highway. Militants were preparing for something large-scale and deadly - such mined cars take the lives of dozens of people and can destroy buildings without restoration.

And in the province of Daraa two militants who tried to lay explosives on the expensive, paid for it with life - their device exploded just at the time of installation.

In the same province, during local negotiations with the authorities, the “oppositionists” made an obligation to stop abductions. But soon after that, in the village of Gussum, they kidnapped the father of Syrian Deputy Foreign Minister Faisal Al-Mekdad. The kidnappers were not embarrassed by the promise made earlier, nor by the fact that this person was already in 80 years.

Any promise made by militants actually turns into a new cynical crime.

21 May at one in the morning an Israeli car crossed the cease-fire line between Syria and Israel. The car was heading towards the village of Bir Ajam in the previously liberated territory of the Syrian Golan.

The army destroyed the vehicle - the intruder of the border. In response, Israel launched two rockets in the direction of the village of Az-Zubaydia. Fortunately, there were no casualties.

A day earlier, an Israeli car with modern communications equipment was discovered in the city of Al-Xayr during its stripping from terrorists.
Israel, which is supposedly neutral in words, is trying to deny its involvement in what is happening and to help the militants. But with each incident to the Zionist territorial entity, this is becoming more and more difficult.

ATS Army warned that any attempt to violate the country's sovereignty will be repulsed. The statement of the High Command of the army said: "He is mistaken who thinks that he may feel our readiness to defend the honor of the Motherland."

On May 19 a mass demonstration took place in Ankara, the participants of which, in particular, expressed their solidarity with Syria. The event, which was attended by hundreds of thousands of people, was dedicated to the memory of Ataturk, which opposition forces oppose to Erdogan. Among the organizers of the procession are the Republican People’s Party, the Democratic Left Party and the Party of the Workers of Turkey.

The demonstrators protested against the US policy towards Iran, Iraq, Syria and Turkey itself, whose leadership was only a puppet of Washington. The speakers said that the terrorist attack in the city of Reyhanly 11 in May, which killed innocent people, is the result of Erdogan’s policy, which, by order of the United States, turned the territories bordering on Syria into bases for training and sheltering terrorists. “We do not want a repetition of the Reichanles, where innocent people died as a result of their anti-Syrian policy. It is important for us to preserve the Turkish-Syrian unity, which the US is trying to destroy, ”said the participants. “We do not want war with either Iraq or Syria. Those who oppose the Assad government today are serving American and Israeli interests. We are for an independent foreign policy of Turkey, for friendship with our neighbors. ”

Let me remind you that Erdogan himself, without any investigation, is trying to accuse the Syrian government, not terrorists, of organizing the terrorist attack in the Reykhanly (although there are militants in the territory on both sides of the Syrian-Turkish border who have already proved their ability to the most barbaric terrorist action).

The Syrian side proposed Erdogan to jointly investigate the crime. But the Turkish prime minister least needed the truth about the terrorist attack, so he rudely refused and drove off to Washington to discuss the next measures against Syria.

One can not understand Erdogan alone - he goes against the opinion of his own people, who understand the true culprits of what is happening. Which did not accept and will not accept explanations that the Syrian government arranged acts of terrorism, and is capable and itself to understand, whose hands this business. And who does not want war with neighbors at all, contrary to the Pentagon’s schemes.

Ctrl Enter
Noticed oshЫbku Highlight text and press. Ctrl + Enter
We are
Damascus: mortar rainsResults of the week. “Lord, why didn't England please him ?!”
23 comments
Information
Dear reader, to leave comments on the publication, you must to register.