Barrels in the style of Paramilitary 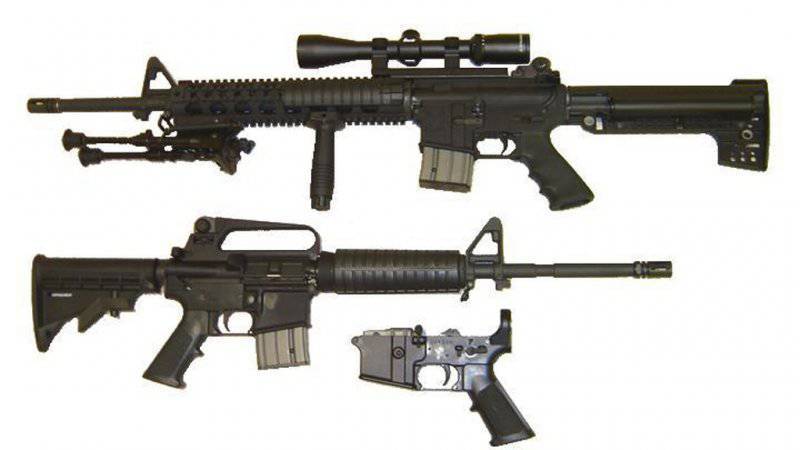 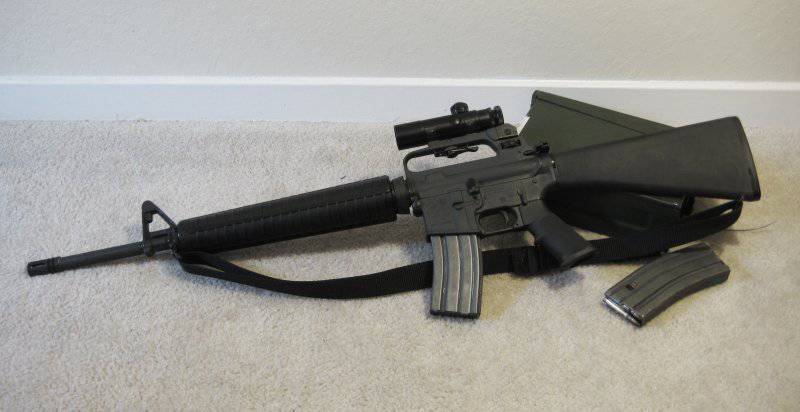 Conversion is relevant not only for the Russian defense industry, but also for foreign manufacturers of weapons! One of the objectives of the conversion is to “get rid” of obsolete weapons and military equipment (military hardware) or its surplus and, accordingly, return to the state budget at least some of the funds spent on their acquisition.

Of course, individual copies can be transferred to a museum or training centers, some are donated as part of helping poor countries, which increases the political capital of the donor country, and the lion's share is transferred to permanent storage sites (the so-called “stock for a rainy day”).

But these areas of using obsolete samples and surplus weapons do not give financial benefits to the state. It is most preferable to maximize their use in the national economy.

Of particular interest is the conversion of small arms, which today around the world is successfully converted into a sports and hunting. Civilian consumers are attracted by the reliability, compactness, multiplicity of charge, and the fact that they are not inferior in their qualities to combat analogues.

These samples received the name Paramilitary abroad - “paramilitary” and are widely distributed among foreign hunters.

Work on the creation of Paramilitary weapons by foreign firms are carried out in two main areas: the production of sporting and hunting samples, having the maximum level of unification with combat analogues, and the alteration of weapons removed from service for later use in hunting and sport.

The Mini-14 carbine is the basic model of the COO family of samples from Sturm, Ruger & Co. Inc

One of the oldest US firms - Colt's Manufacturing Co. Inc. (headquarters in Hartford, pc. Connecticut) was founded in the XIX century. and began its activity with the production of revolvers of its own design.

In 1959, the firm received a government order to manufacture an AR-15 rifle for the US Army, produced under the Colt М16 index, which served as the basis for the development and production of a number of civilian weapons models.

Samples of sporting and hunting weapons based on the AR-15 assault rifle created by Colt differ from the base model by the used cartridge, the main parameters of the firing mechanism, the nature of firing (the possibility of automatic fire has been eliminated).

The automatics of these samples works due to removal of powder gases. 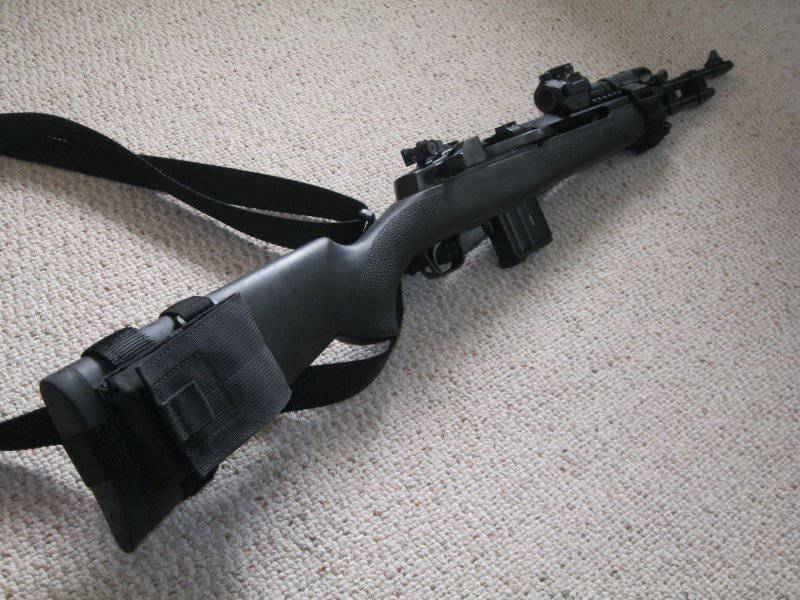 The barrel bore is locked to seven lugs of the rotary larva of the slider. Trigger fire trigger single fire. The sighting device of the open type consists of a front sight on a high base, adjustable vertically and horizontally. Sighting device allows you to make an amendment to the side wind.

The charging handle is located at the top, the safety bracket can be folded back to allow shooting in winter with gloves.

The butt is made of impact-resistant plastic and is located in line with the axis of the barrel, which has a positive effect on the accuracy of shooting.

Tactical and technical characteristics of weapons such as Paramilitary from the company Colt are presented in Table. 1.

Another major participant in the production of civilian weapons such as Paramilitary is the American arms firm Ruger (Sturm, Ruger & Co. Inc.), founded in 1948 by William Waterman Ruger and Alexander M. Sturman (Southport, Connecticut).

The first model of the new weapons company in the 1949 was a small-caliber pistol; and in 1959, a self-loading carbine chambered for .44 Mag appears. In 1967, the company launched a single-shot carbine. Then the rifle model 77 arr was created. 1968. In 1974, the company’s engineers developed a self-loading Mini-14 carbine chambered for .223 Rem. and then the company made the next logical step - it created another modification of the Mini-14 / 20GB carbine with a bayonet and a flame arrester. In 1992 based on the rifle model 77 arr. 1968 G. created rifle M77 Mark II.

At the end of 1980's an assault rifle is created that looks no different from the Mini-14 AC-556, which allows automatic fire and fire in fixed bursts. At the same time, the Mini-14 (Mini-30) carbine variant is created for the Soviet cartridge 7,62x39 mm.

50-year-old experience in designing small arms, acquired by Ruger / Sturm specialists and well-deserved recognition of the company's achievements in the global arms market, allowed specialists to start creating sporting and hunting weapons based on military weapons.

Carabiners of this series are intended mainly for farmers and self-defense. In practice, it is used for hunting small animals and birds. The weapon has a vapor system automation, often walnut bed. The sighting device is equipped with a knife-shaped front sight and is entirely adjustable vertically and horizontally. On rifles you can install an optical sight. The magazine has a capacity of five rounds. To protect the hand from burns when firing, the barrel has a plastic lining.

The company carried out firing tests of the Ruger Mini-Thirty carbine for the Remington cartridge 7,62x39 mm cartridges with Core-Loct bullets with a soft 8,1 g headpiece in three series of three shots at a distance of 50 yards (45,5 m), and the following value of the Per parameter was obtained. —50,8; 48,13; 30,48.

These carbines for sport and hunting differ from the combat design of the lodge with a half-pistol grip without a protrusion under the cheek made of American walnut wood, the main parameters of the barrel, receiver and bolt and the used cartridge.

Characteristics of Ruger / Sturm carbines are presented in table. 2.

Springfield Inc. occupies a significant place in the Paramilitary weapons market. (USA), which created on the basis of the Springfield MXNUMA battle rifle a number of civilian samples.

The Springfield Armory State Arms Factory was founded in 1777 and for the period from its inception to the present, has produced a huge number of weapons. After 190 years (1968) after the founding of the plant, Secretary of Defense Robert McNamara closes this plant. Until 1971, the company is inactive, and in 1971, a certain Texan buys the plant, its brand and its patents; but this attempt to revive production failed. Only in 1974, businessman Robert Reed and his three sons buy a factory that comes to life under their leadership. In 1992, the Springfield Armory factory was renamed Springfield Inc.

The base model for Paramilitary type samples at the Springfield plant became the M1A carbine chambered for .308 Win.

The M1 carabiner was developed by Winchester for the .30 cartridge, the M1A was later created for the .308 Win cartridge.

The highlight of the MXNUMHA carbine is a reloading system based on the use of a special cartridge, which is intermediate in power between the pistol and rifle cartridges. When firing, the powder gases through the hole in the lower part of the barrel (the muzzle) enter the gas discharge tube and act on the piston, which transfers the force to the mechanisms for unlocking the bolt, removing the liner, compressing the return spring, gripping and discharging the cartridge and locking the barrel.

Shop box detachable. The front sight and military purpose. Rear sight with micrometric adjustment horizontally and vertically. The butt with a pistol grip and forearm is made of black plastic, a notch is applied on the forearm and grip. There is a rubber damping pad.

The main difference between the M1 carbine and the M1 is the presence of a folding stock.

Currently, M1 and M1A rifles are decommissioned; the main reason is the cessation of production of the intermediate cartridge.

The main differences between these samples and the combat were the parameters of the firing mechanism, the shape of the butt, the nature of the shooting and the cartridge used. Firing tests of civilian samples for a range of 50 yards with a series of five shots from a position with a folded butt gave the result of the P - 50,8 mm.

The performance characteristics of samples created on the basis of the M1А National Match karabiner from Springfield are presented in Table. 3.

Do not "offend" US firms when creating samples such as Paramilitary and foreign samples. These companies include Century Inc. I Arms, created on the basis of the Belgian rifle FN FAL chambered for 7,62x51 mm FAL sample Sporting Rifle chambered for .308 Win. and 7,62x51 mm.

The civilian design completely duplicates the FN FAL military weapons, with the exception that the FAL Sporting Rifle rifle can only be fired with single shots. The front sight and rear sight of a military sample with micrometric adjustment of the vertical and horizontal. The butt of a hunting type with a stylized pistol grip and a hole for the thumb of the hand is made of black plastic and is equipped with a shock-absorbing rubber butt plate and military-type fore end.

The main differences of the FAL Sporting Rifle rifle from the base are the parameters of the firing mechanism, the nature of the shooting, the shape of the butt and the cartridge used.

The performance characteristics of the FAL Sporting Rifle sample are presented in Table. 4.

Despite the fact that the weapon market of the United States offers consumers a large range of hunting and sporting weapons, recently Paramilitary samples have become increasingly popular. The main reasons for the deployment of its production was, according to gunsmiths, reducing the financial costs of development and production, the possibility of bringing samples to the market at lower prices and the need to reduce army stocks of outdated small arms.

Ctrl Enter
Noticed a mistake Highlight text and press. Ctrl + Enter
We are
Sharps Four Barrel Pepperbox PistolDouble-barreled pistol of American Arms Double Barrel Derringer and its variants
9 comments
Information
Dear reader, to leave comments on the publication, you must to register.