27 May 2013
62
Remember the popular TV commercials: “Sweden: done wisely”? Swedes are really great masters to surprise the world with original technical solutions. The military of many countries from the middle of the last century raised their eyebrows over and over again, seeing new Swedish developments in the field of armored vehicles.


For the first time, the Swedes surprised the world with a novelty in the field of armored vehicles, perhaps, back in the early thirties. At that time, the main disadvantage tanks there was a fragility of the tracks - they "flew" literally after 80-100 km of travel along the highway. Because of this, in order to save materiel and save fuel, tanks drove directly to the battlefield on trailers, or even in the back of a truck. Which, of course, was inconvenient! To solve this problem, in many countries they began to design wheeled-tracked tanks, simultaneously equipped with independent wheeled and tracked engines. Prototypes of similar equipment were created in France, the UK and Czechoslovakia. But the best, truly capable model, was created precisely by the Swedes. 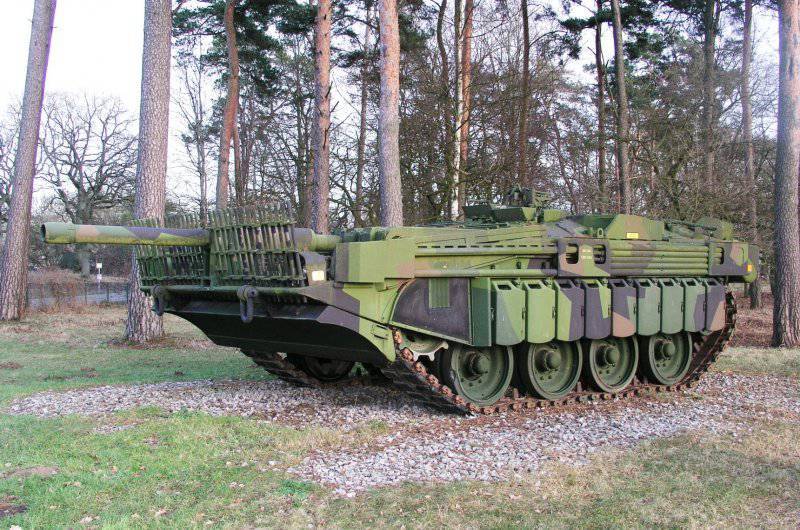 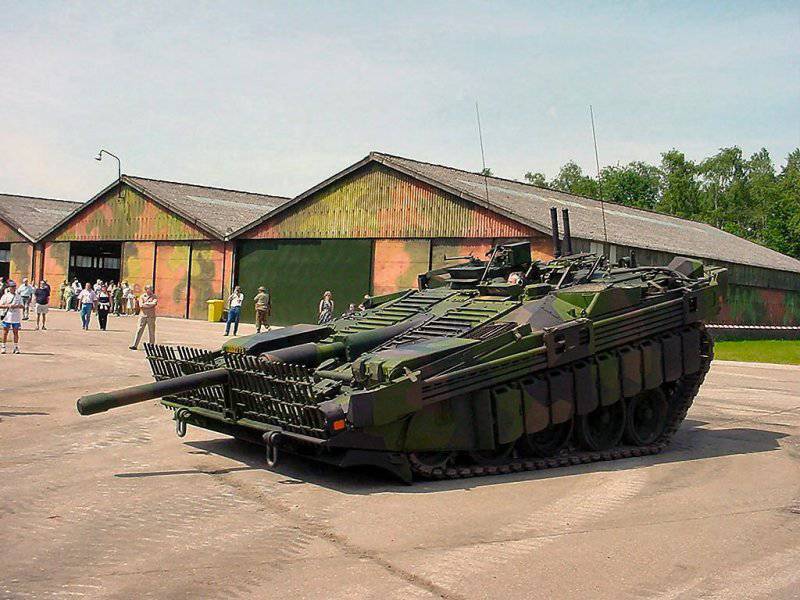 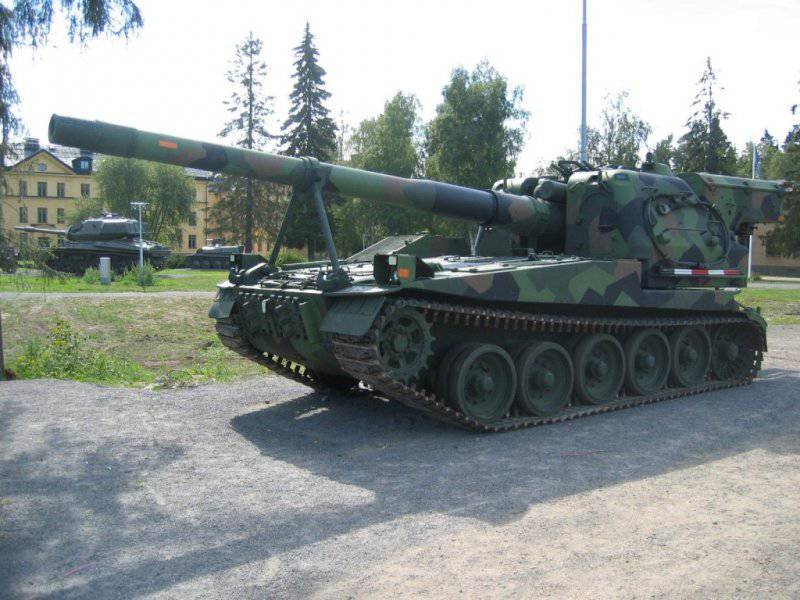 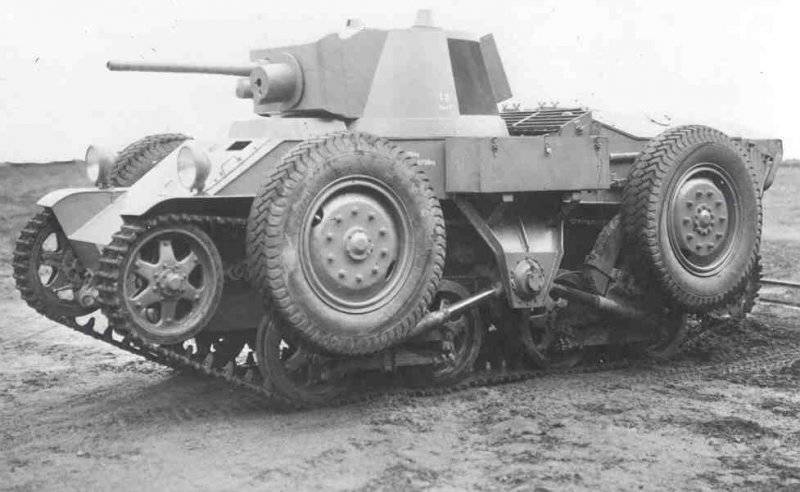 In 1931, the Swedish firm Landsverk launched the L-30 tank for testing. He had to lift and lower the wheels by the force of the motor in just 20 s, and this could be done not only on the spot, but also in motion. For comparison, let us say that the Czechoslovak KN-50 used the same operation for 10-15 mines, and special supports were used. The L-30 raised the wheels did not worsen the view and did not interfere with the use of weapons. Thanks to the duplicated drive and two places for drivers, the tank could move forward and reverse with equal success. In 1933, the Landsverk created a faster, lighter version of the tank called the L-80. However, both cars did not go into the series.

At about the same time, Landswerk launched the first stories tank with rational angle of armor, anticipating the famous Soviet T-34 and French FCM 36. It was a light reconnaissance L-100 weighing just 4,5 tons. It was armed with an 20-mm cannon and an 8-mm machine gun, located in a conical shape of the turret. He also had other innovations: an individual torsion bar suspension and a periscope sight. In the application of the torsion bar suspension, the Swedes outstripped the German Pz. IIIE and the Soviet KB for five years, and the American M24 "Chaffee" and at all for ten years. L-100 had a very high power density - 29 l. s./t, which allowed him to develop a greater speed for that time - up to 60 km / h. This tank also did not become a large-scale car, but still three small batches, slightly differing from each other, were issued. The few L-100 were in service until the early fifties.

In 1966, the Swedes were again, as they say, ahead of the rest. It was then that the series was launched by designed by the specialists of the companies Landsverk and Bofors, a reckless tank Strv103, also known as “S”. He was armed with a thoroughly modified famous English 105-mm tank gun L7. It is rigidly secured in the front, strongly beveled sheet of the body. Targeting on the target vertically carried out due to the fact that the hydropneumatic suspension allows you to change the clearance and tilt the tank forward and backward. Horizontally, the tank pointed the gun at the target by turning the hull. A complete rotation around the Strvl axis 03 was able to accomplish in just 10 s! This is when most tanks take almost half a minute to rotate the turret 360 degrees. 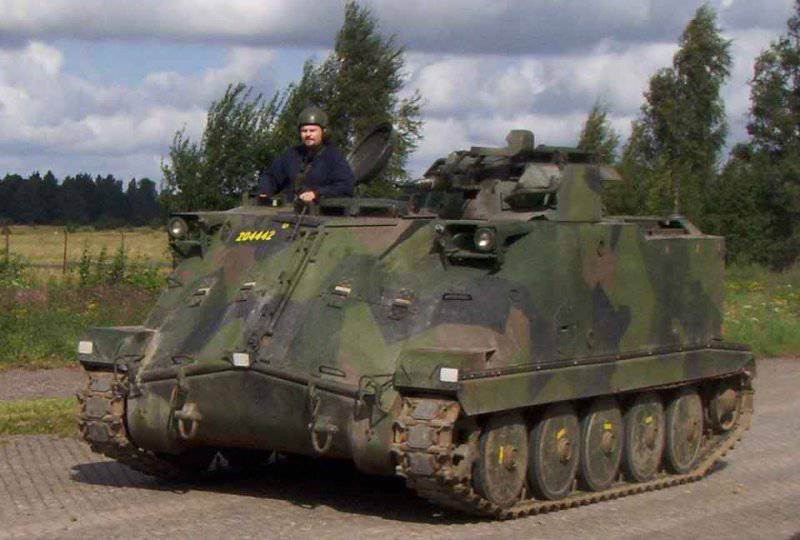 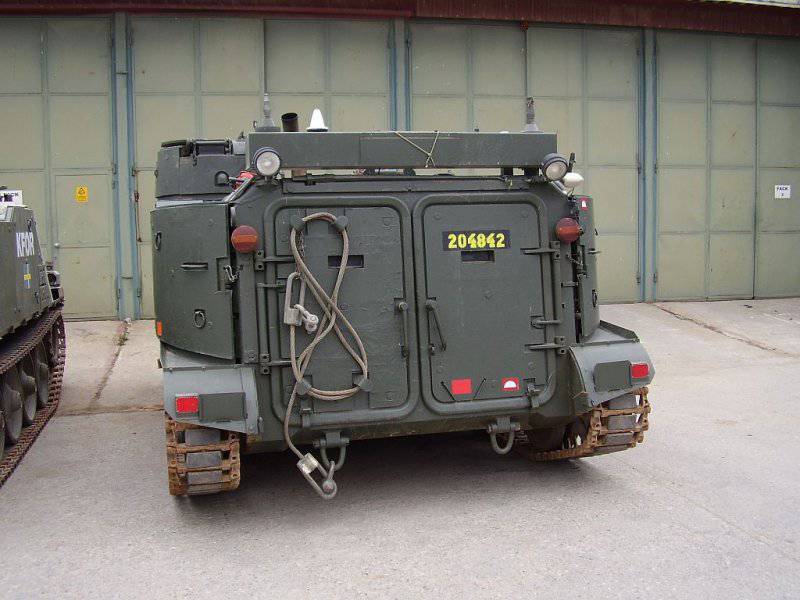 The propulsion system of the Swedish turretless tank turned out to be very original. For an economical course, he used the English 240-strong diesel Rolls-Royce K-60, and for acceleration to maximum speed, he also connected a Volvo gas-turbine engine with a capacity of 330 l. with. In the eighties, with the modernization of machines, the engines were replaced by more modern ones. Thanks to the rigid installation of the gun, it was possible to introduce automatic loading on the Strvl 03 and achieve a record-breaking rate of fire of 15 per minute. This, while for other tanks, this figure ranged from 5 to 8. Note that the tank "S" also knows how to swim. To overcome the water obstacles on it is used an individual craft of the frame type.

The Strvl 03 base was used to design the VK-155 “Bendkanon” self-propelled gun, which also surprised the military experts of the whole world with its originality. On it, so that the crew is not threatened with death in the case of detonation of the munition, the latter was taken out of the hull and tower. At the Bendkanon, the Swedish designers installed a kind of turret consisting of two autonomous halves, between which they placed the gun pointing drives, and the container with 14 shells was on the breech side of the gun, in the back of the machine, playing the role of a counterweight. The fire went on automatically, and all the shells could be fired off in a queue in just 45 s, bringing down the enemy with the same hail of fire as a whole battery of conventional cannons of the same caliber. 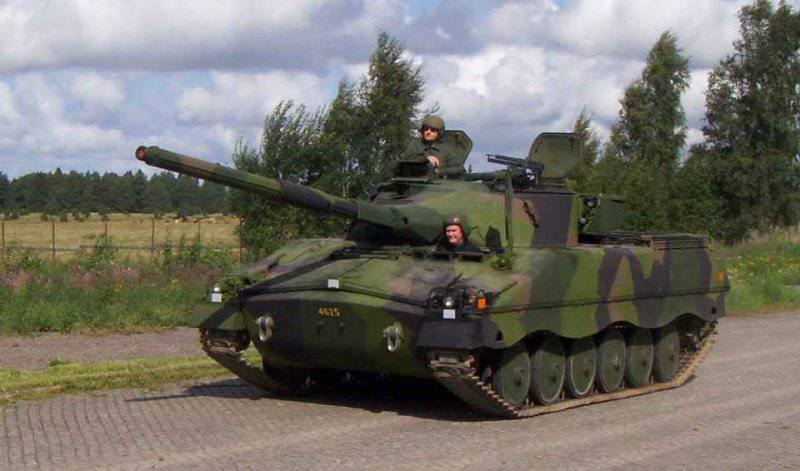 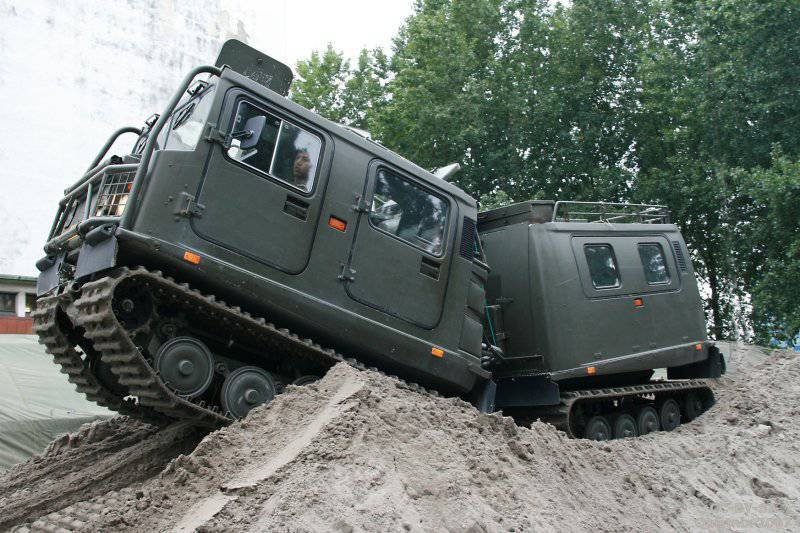 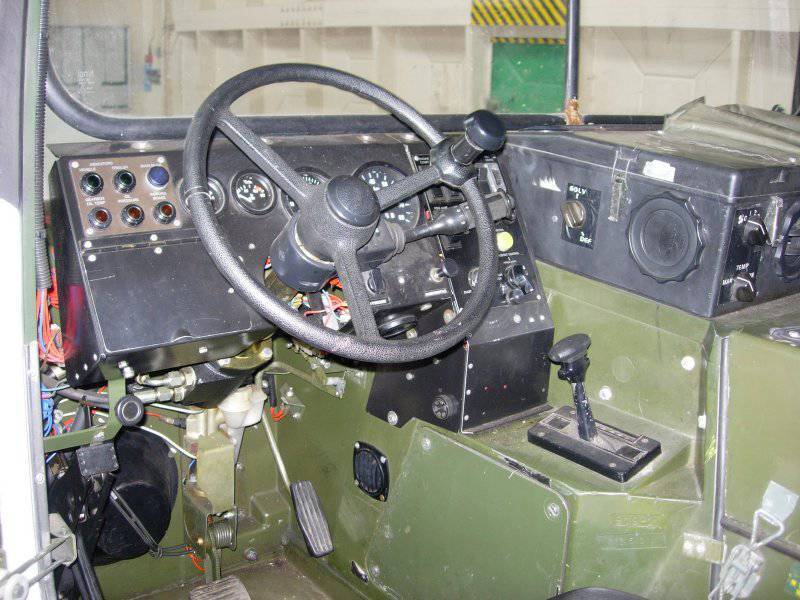 Cabin of the driver of an armored personnel carrier Bv206

During the 1966-68. Approximately 30 such self-propelled guns were produced. They were very heavy - around 60 t - and, because of this, unusually slow for modern self-propelled artillery. Their maximum speed does not exceed 28 km / h, which would be quite normal for the thirties or forties of the last century, but not for the second half of it.

Back in the early sixties, the Swedish company Högglund and Sener received an order to develop a tracked armored personnel carrier, later designated Pbv302. At its base, it was decided to make a light tank, which could be used to solve reconnaissance tasks, provide fire support to infantry, and also to fight from ambush with enemy tanks. The result of the design work was a light tank IKV-91, mass production of which began in 1975, without a number of innovative solutions has not done here. Thus, the upper part of the sides of the IKV-91 has a spaced, that is, two-layer booking, with tanks with fuel and spare parts placed between the sheets of armor. Now you will not surprise anyone with such a technical solution, but for the beginning of the seventies the spaced armor was a wonder.

But the main highlight of the IKV-91 is, of course, its 90-mm gun. She shoots feathered projectiles with liquid propellant. The pressure of the gases in its barrel is low, which makes it possible to achieve a very long life of the gun. With liquid propellants are still working in many countries around the world, until now no one has yet reached the production samples. As for the rest, the IKV-91 is a quite ordinary tank: twin and anti-aircraft machine guns, a laser range-finder, a ballistic computer, smoke grenade launchers.

Once again, the Swedish developers have passed on the originals of the highest degree, having designed the articulated Bv206 transporter. It was the brainchild of Högglund, which won in the early seventies a tender for the right to develop and mass-produce a light articulated all-terrain vehicle with an active trailer for the needs of the army, patrol units and rescue services. It was planned to be used primarily for the transport of troops and equipment in the snow-covered areas and swampy areas of northern Sweden. However, BV206 soon became widespread throughout Scandinavia, and to date, 11000 order has been produced for such transporters used in 37 countries of the world, including Russia, the USA, Canada and China. 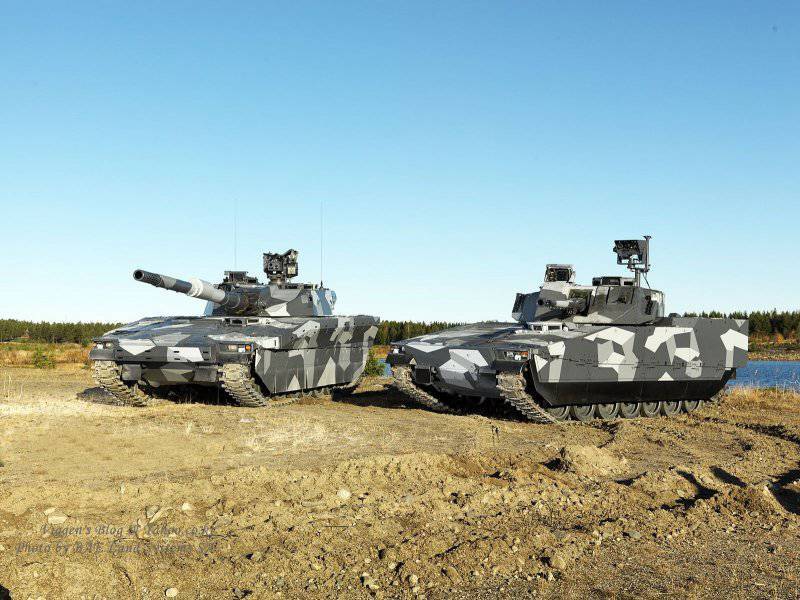 The army version is covered with anti-bullet armor and is designed for the driver and 11 fully equipped soldiers. Four sit in the front section of the conveyor, the other eight - in the back. Civilian options can accommodate up to 17 people. Bv206 is able to swim at speeds up to 4,7 km / h. Canadians and British used these articulated transporters even in the fighting in the highlands of Afghanistan. There they showed a very interesting property. The specific pressure of the Bv206 tracks on the ground turned out to be so low that they moved through minefields without causing mine explosions.

The CV-90 infantry fighting vehicle launched into mass production in the early nineties seemed to fit in well with all the engineering solutions that were classic for this type of equipment and adopted throughout the world. The engine compartment in the front of the hull, the landing gear in the aft, two-seat turret with an 40-mm automatic cannon in the middle of the hull. Of the total number of the car, it was only an unusually powerful cannon for infantry fighting vehicles, created on the basis of anti-aircraft guns of the Second World War. However, the Soviet BMP-3, which went to the series at about the same time, was armed with the 100-mm cannon coupled with an 30-mm machine gun!

But when the Swedes decided to design a self-propelled mortar on the basis of the CV-90, they again sighed. On the BMP chassis, they hoisted the AMOS turret with two 120-mm mortars of high elongation, capable of firing both mines and projectiles, including guided STRIX ammunition. This gigantic “double-barreled gun” is capable of firing at a rate of 25 rounds per minute at distances up to 10 km. Their mass production for the Swedish army is scheduled to begin at the end of 2011, but a contract has already been signed for the delivery of a batch of lightweight single-barreled self-propelled mortars to Slovenia, called NEMO CV-90. 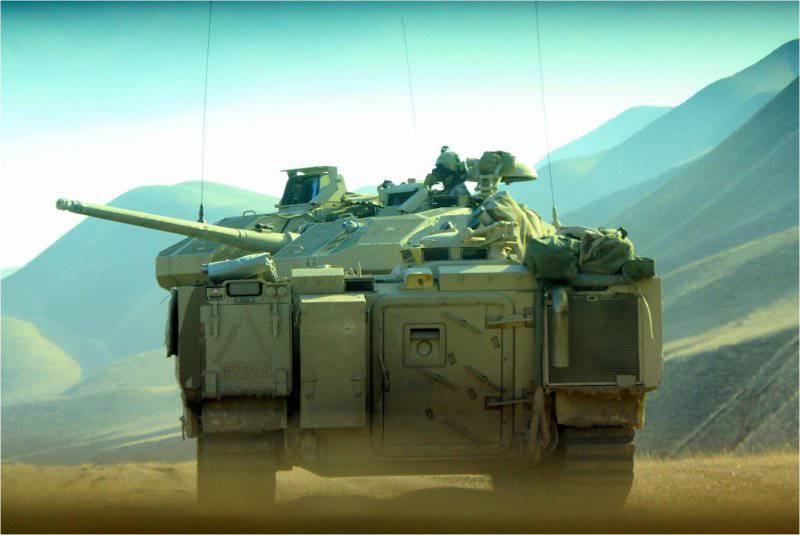 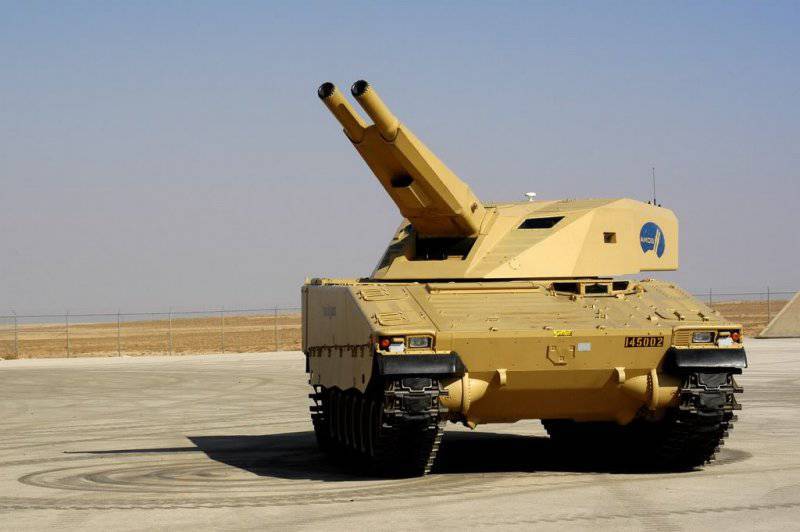 Ctrl Enter
Noticed oshЫbku Highlight text and press. Ctrl + Enter
We are
Project wheel-tracked tank A-20Iron fist of the Red Army. Motorized and tank divisions
62 comments
Information
Dear reader, to leave comments on the publication, you must to register.