30 May 2013
23
After the fall of 1943 in the fall of the fascist regime in Italy, most of the Italian combat vehicles, as well as the enterprises producing them, fell to the Germans. Despite the obsolescence of Italian armored vehicles and its low tactical and technical characteristics, the Germans actively used it in combat operations in Italy and the Balkans.


So, for example, the Germans did not disdain even L3 wedges. After the surrender of Italy, part of these machines went to the Yugoslav partisans, part to the Croatian troops and the German Wehrmacht, which used them for anti-partisan operations in Yugoslavia. Moreover, by order of the German authorities in 1944, another 17 L3 tankettes were assembled. Equipped with these machines tank groups RSI (Italian fascist republic of Salo) “Leoncello” and “Leonessa”.

The Germans also received L6 / 40 light tanks. They entered service with the Wehrmacht under the symbol Pz Kpfw L6 (i) and were used in the tank battalion of the SS Prince Prince Eugene SS division in Yugoslavia, as well as in the 336 infantry and 26 armored divisions in Italy and Slovakia. 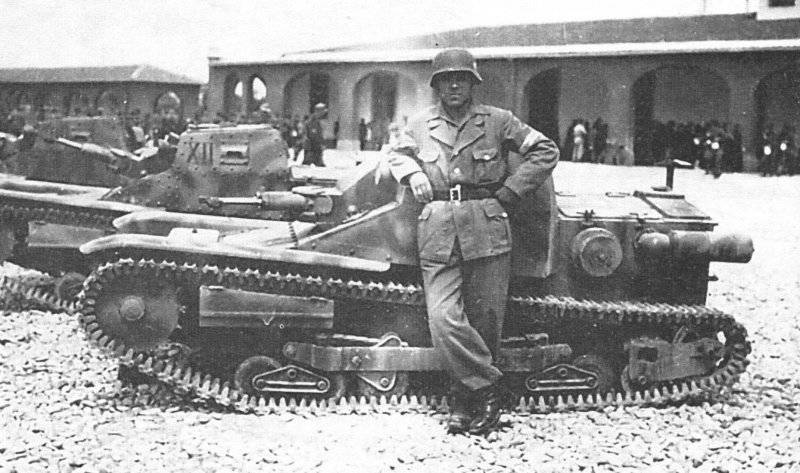 German soldier posing against the background of L3 wedges. 1943 year

According to the German order, 1944 tanks of this type were also manufactured during 17.

The tanks that were in the Balkans, the Germans included in the armored battalion of the SS division "Prince Eugene", and captured in Italy - in the 26-th tank and 22-th cavalry SS division "Maria Theresa". The M15 / 42 tanks entered only the last two formations, the first of which fought in Italy, Austria and Slovakia, and the second entered the battle against the Red Army in Vienna in April 1945. Several M15 / 42 vehicles were used by the Germans on the Soviet-German front in the battles for Budapest in January 1945. 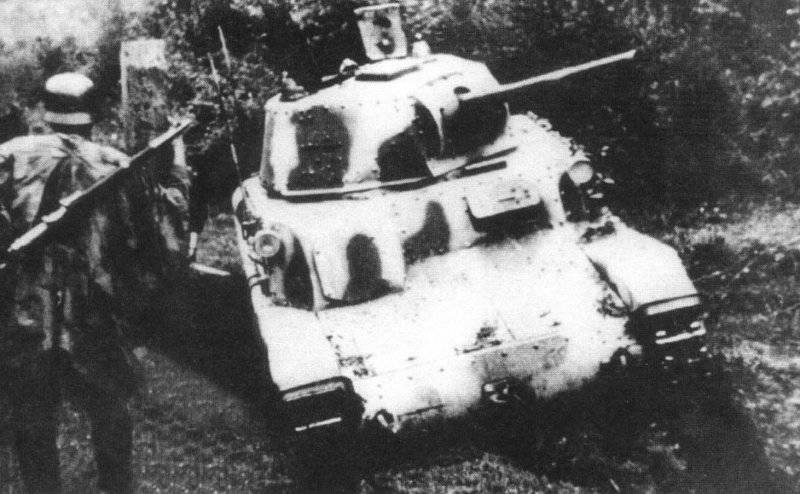 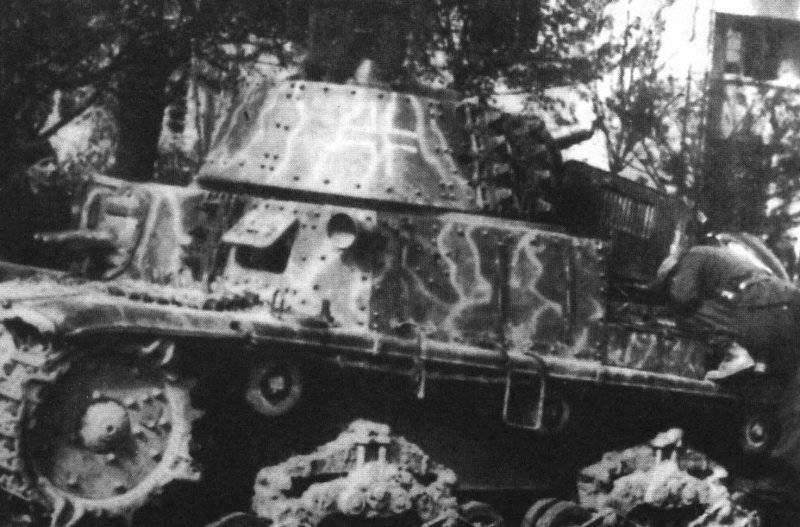 Italian self-propelled gun Semovente da 75 / 18. Judging by the characteristic shape of the helmets on the heads of its crew members, this vehicle belongs to the composition of the German parachute-tank division “Hermann Goring”. Italy, 1944 year 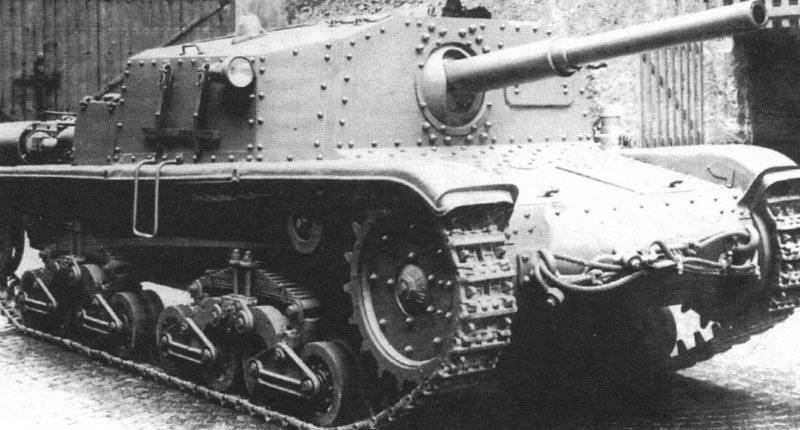 Self-propelled gun Semovente da 75 / 34. Production of this self-propelled gun began at the end of April 1943, and she did not have time to get into the Italian army. Hitlerite Wehrmacht became the main recipient of these small and rather successful combat vehicles.

By the time Italy surrendered, only one prototype of the newest Italian medium tank Р40 was built. In anticipation of their mass production, in August - September 1943, the Italians formed two battalions of heavy tanks (according to the Italian classification, this machine was considered heavy), which, without receiving material, were soon disbanded. Under the German control in 1943, the 150 Р40 tanks were ordered. In 1944, four tank artillery regiments were equipped with tanks of this type, 36 combat vehicles in each. Due to the lack of engines, still 38 tanks Р40 were used as fixed firing points.

No less actively exploited by the Germans and Italian assault guns Semovente. Of the latest 178 units, 75-mm cannons with barrel lengths in 18 calibers were armed, and the rest in 34 caliber. In addition, 40 assault guns M43 with 75-mm cannon with barrel length 40 calibers and 117 105-mm self-propelled howitzers on the chassis of the M15 / 42 tank arrived in German units. Most of this equipment expanded the German 26-th tank and 336-th infantry divisions. 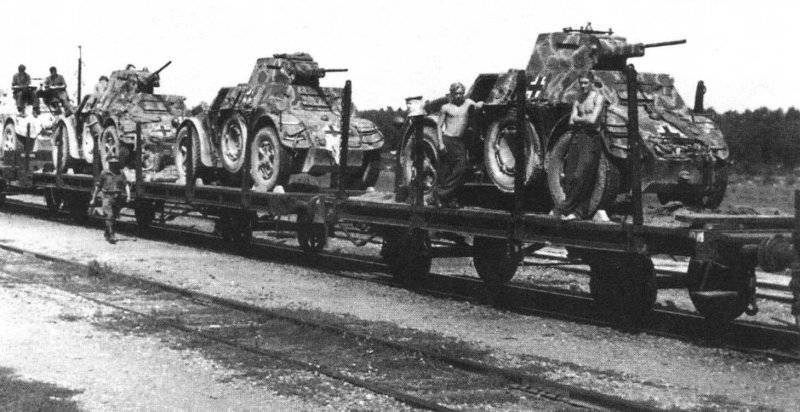 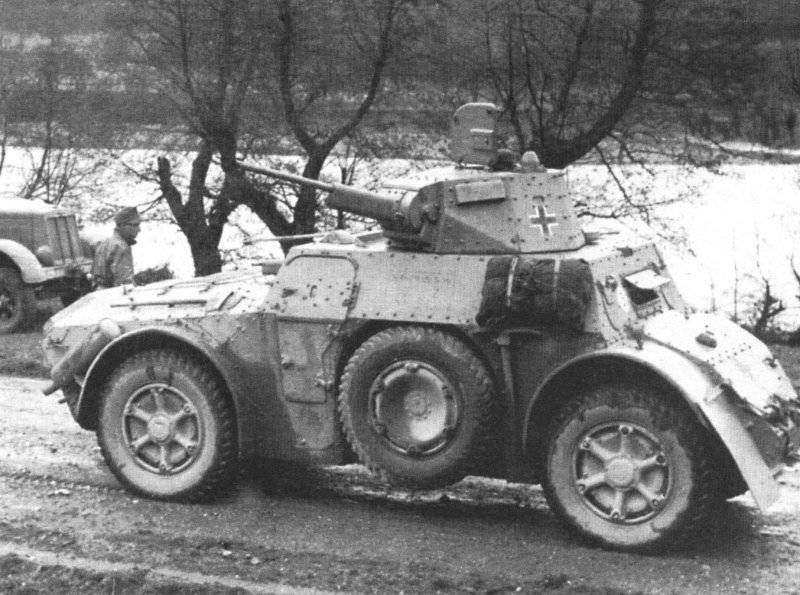 Italian armored car Autoblinda AB 41, operated in one of the parts of the Wehrmacht. East Front, 1944 year