29 May 2013
96
The Germans got the largest trophies during Operation Barbarossa. Suffice it to say that by August 22, 1941 they had shot down and captured 14 Soviet tanks. However, attempts to use such rich trophies from the very beginning were fraught with great difficulties. A significant part of Soviet tanks was so broken in battle that it was only suitable for scrap. In most tanks, which did not have visible external damage, inspection revealed breakdowns of the engine, transmission or chassis units, which proved impossible to eliminate due to the lack of spare parts. 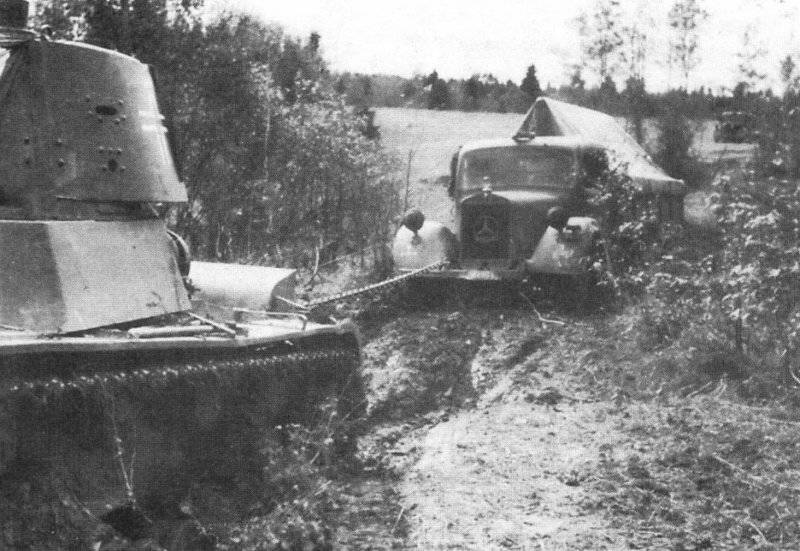 The first Soviet T-26 tanks captured as trophies began to be used by the Wehrmacht in the summer of 1941. In the photo above - the tank T-26 rev.1939. Pulls out a Mercedes-Benz 3-ton truck stuck in the mud 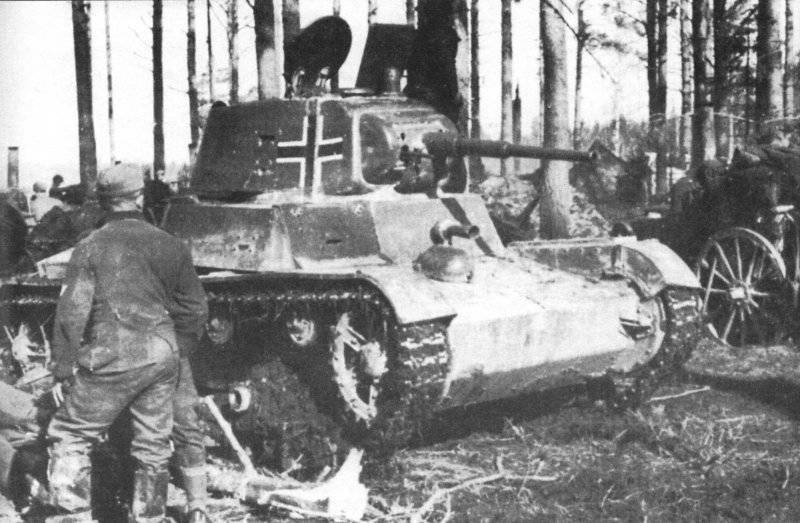 The main reason for the weak interest of the Germans to the captured Soviet armored vehicles was the high losses of Germany in their own combat vehicles and the associated enormous workload of repair-evacuation and rehabilitation services. Engaging trophy tanks was simply no time. As a result, by October 1941, there were only about 100 Soviet tanks of various types in German troops. The rest, abandoned on the battlefield, Soviet armored vehicles, after standing in the open air the winter of 1941 / 42 of the year, could not be restored. During this period, the Wehrmacht received only a few T-26 (Pz.740 (r), BT-7 (Pz.742 (r) and T-60) from repair companies. Most of the machines, first of all, T-34 (Pz. 747 (r) and KB (Pz.753 (r), used by front-line units, were captured in fully working order, were immediately put into service and operated until they were destroyed or failed for technical reasons.

Only from the middle of the year 1942, the units equipped with captured Soviet tanks began to be supplied to the armament of the units from German repair shops. The main one specialized in our equipment was a repair factory in Riga. In addition, from 1943, individual T-34s were rebuilt at Daimber-Benz’s factories in Berlin and Wumag in Herlitz. 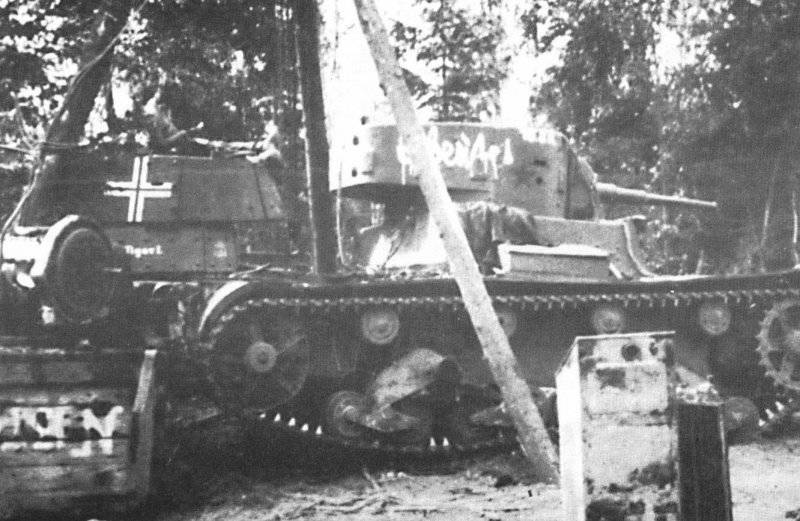 T-26 tanks in a German field workshop. In the foreground - T-26 rev.1933g. with a red star and the words "Captured by the 15 Infantry Regiment". Background: T-26 arr. 1939 with the cross, the name of Tiger II and the tactical badge of the SS 3 Panzer Division "Dead Head"

Trophy Soviet tank T-26 arr. 1939, used for training combat training tasks for interaction with infantry, in one of the units of the Wehrmacht

After the Germans captured Kharkov in the spring of 1943, a repair workshop was set up in the shops of the Kharkov Tractor Plant by the SS Reich division, in which several dozen T-34 tanks were restored. For parts of the SS in general was characterized by a more active use of captured Soviet tanks. Moreover, in a number of cases they were in service with tank subunits together with German tanks. In the division "Reich" formed a separate battalion, which was armed with 25 tanks T-34. Some of them were equipped with German command turrets. 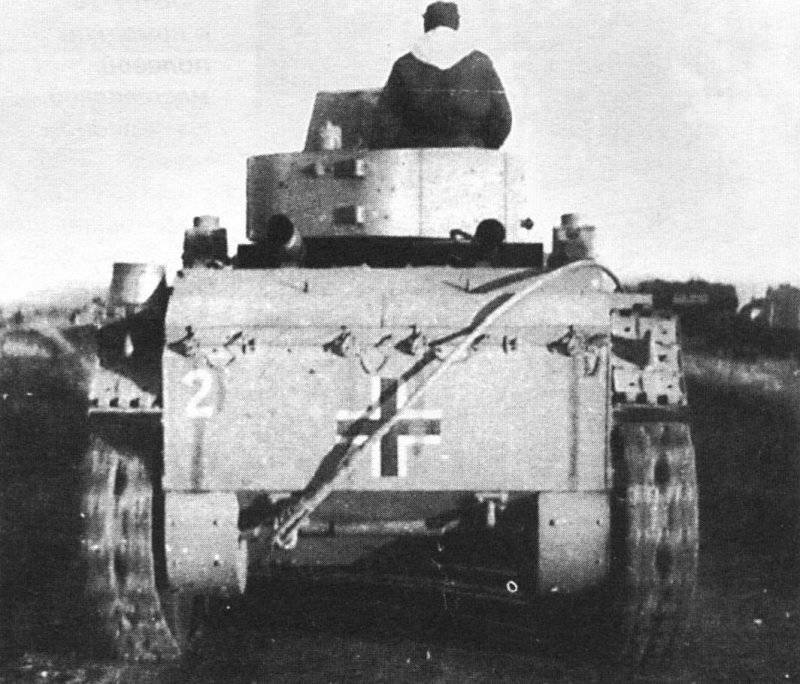 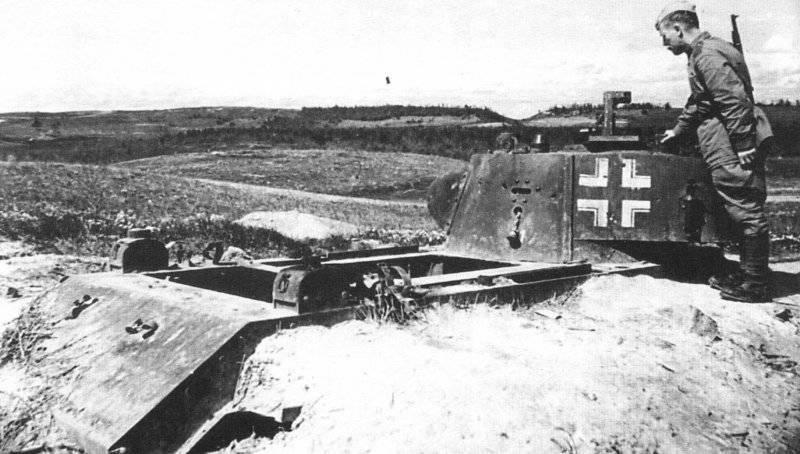 A Red Army soldier examines a BT-7 tank dubbed 1937 dug into the ground, used by the Germans as a fixed firing point. 1943 year 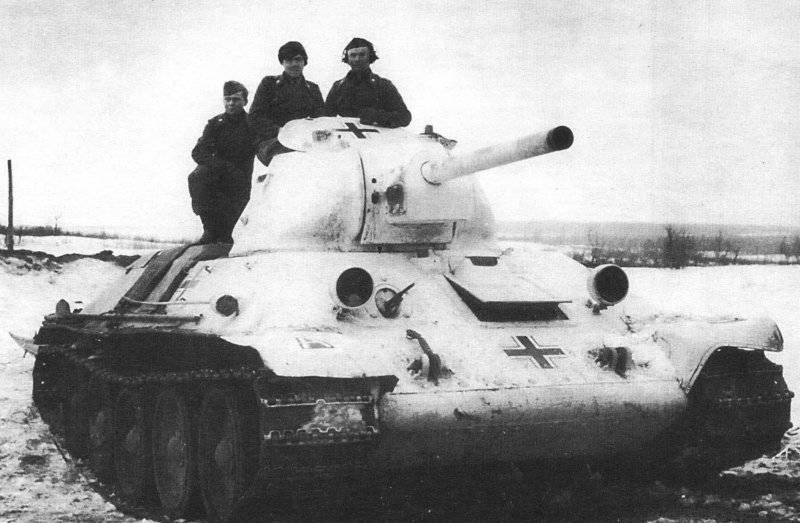 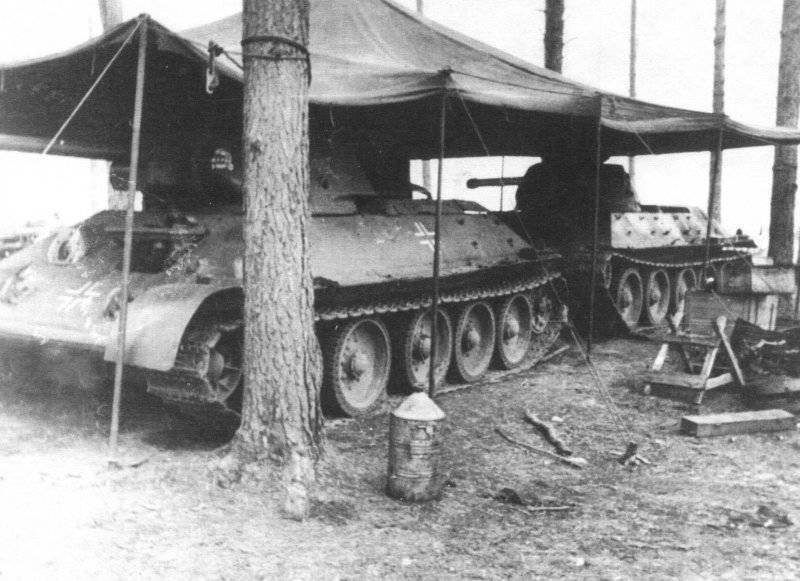 Separate T-34 tanks without towers were used by the Germans as evacuation tractors.

As for heavy KB tanks, judging by the available data, in the German units their number was small and hardly exceeded 50 units. These were mainly Chelyabinsk-made KV-1 tanks with ZIS-5 guns. However, there is information about the use in the Wehrmacht of a certain amount of, apparently, very small, KV-2 tanks.

Instead of a large hatch on the roof of the tower of this tank T-34, a commander's turret was installed, borrowed from the tank Pz.lll 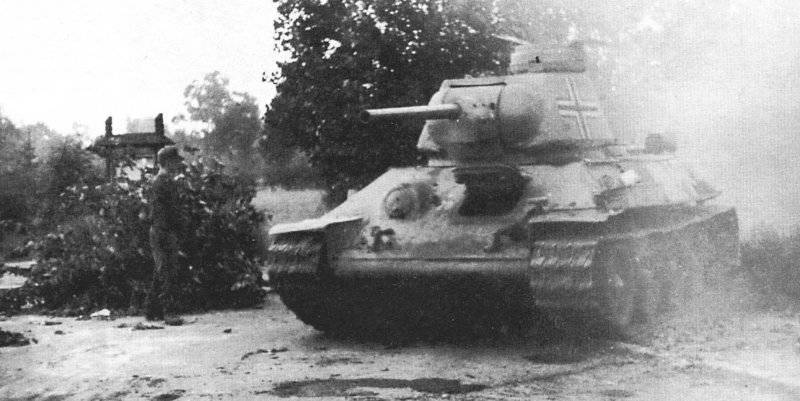 German commander's turrets were installed on some trophy T-34 later modifications - with the so-called improved turret. 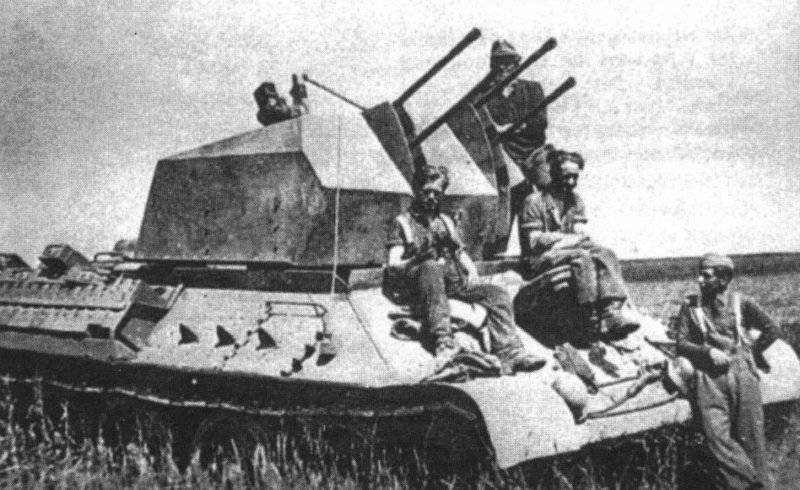 Trophy tank T-34, converted by the Germans into an anti-aircraft self-propelled unit with a 20-mm quad automatic gun. 1944 year

Judging by the photos, on some KBs, to improve visibility, they installed commander's turrets from German tanks Pz.III and Pz.IV. But the most creatively approached this issue in the 22 of the German tank division. Captured by this compound at the end of the summer 1943, the KV-1 tank was equipped not only with a commander's turret, but also rearmed with a German 75-mm long-barreled gun. 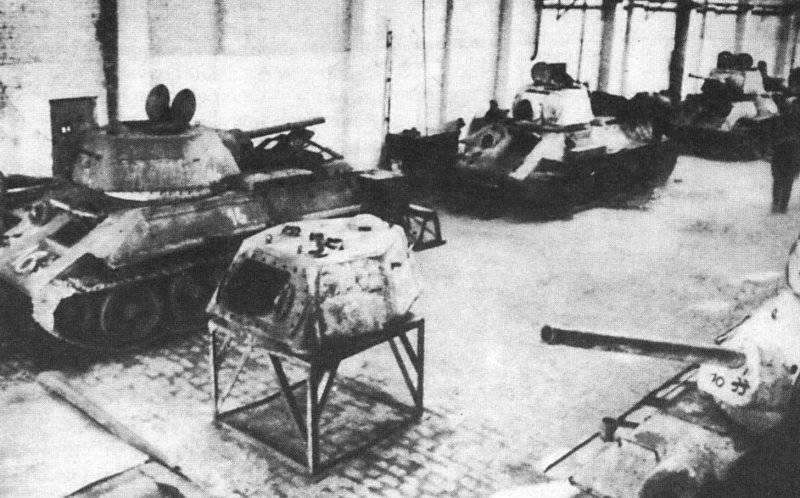 Trophy tanks T-34 repaired in the shop Kharkov Locomotive Plant. Spring 1943 of the year. The work was carried out by a special enterprise created within the structure of the 1 SS tank corps

The repaired T-34 tanks became part of the mixed tank company of the Reich SS division, where they were used in conjunction with the German Pz.IV 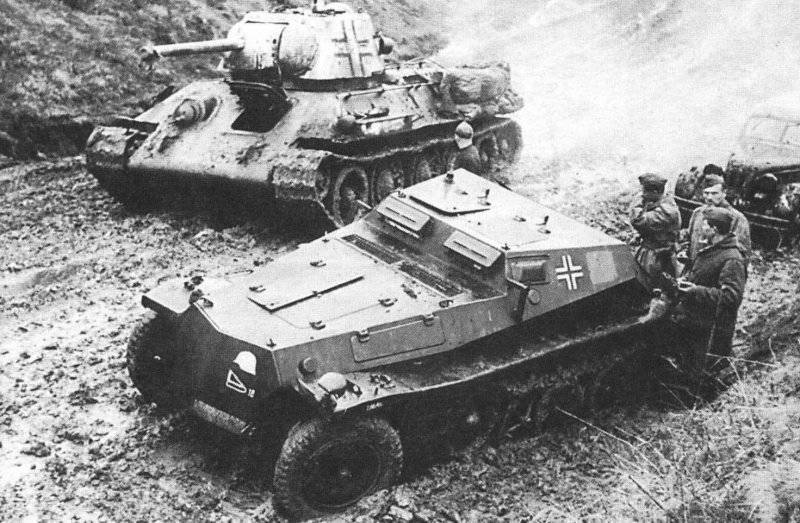 One of the T-34 tanks of the “Great Germany” motorized division. In the foreground is the Sd.Kfz.252 armored personnel carrier. East Front, 1943 year

In May, 1942 of the year during the preparation of the German assault on the island of Malta (Operation Hercules) was supposed to form a company of captured heavy KV tanks. They planned to entrust the fight with the British infantry tanks "Matilda", were part of the garrison of the island. However, the required number of serviceable KB tanks did not turn out and this idea was not implemented, especially since the landing on Malta itself did not take place.

A number of captured light tanks T-70 and T-70М were used by Wehrmacht units under the designation Panzerkampfwagen T-70®. The exact number of these machines is unknown, but there are hardly any more 40 - 50 units. Most often, these tanks were used in infantry divisions and police units (Ordnungspolizei), and in the latter (for example, in the 5-th and 12-th police tank companies) T-70 was operated until the end of the 1944 year. In addition, quite a few T-70 turrets with towers were used to tow 50- and 75-mm anti-tank guns. 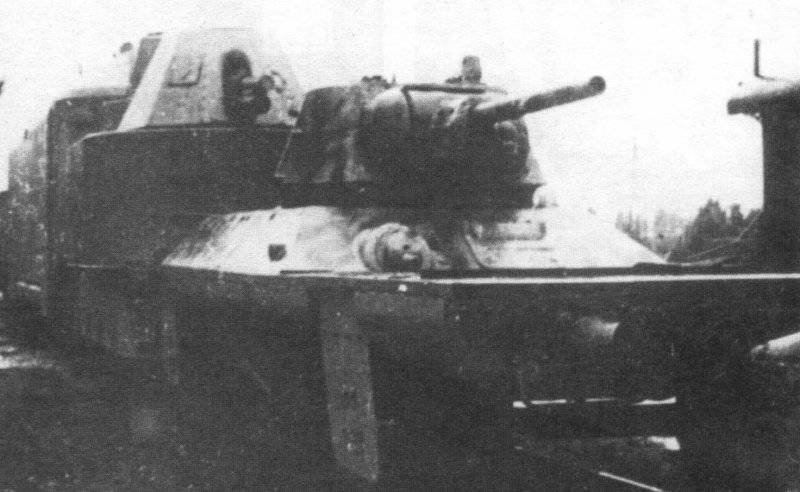 Another option for using captured vehicles - the upper part of the hull and the turret of the T-34 tank became the basis for creating a broker-tank destroyer (Panzerjagerwagen). 1944 year 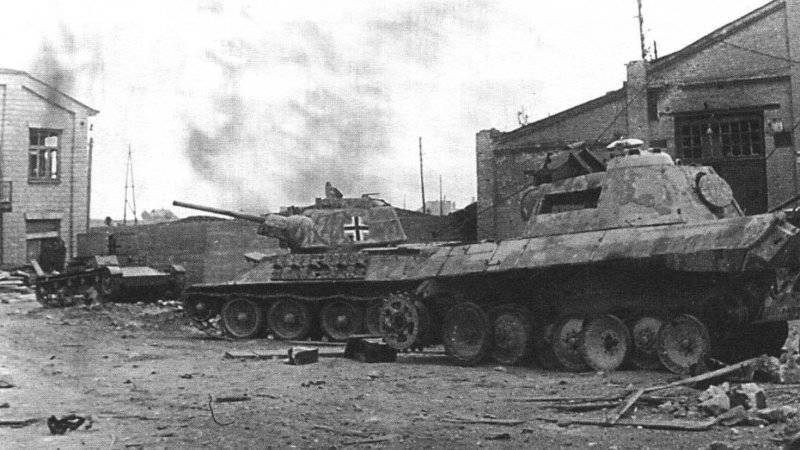 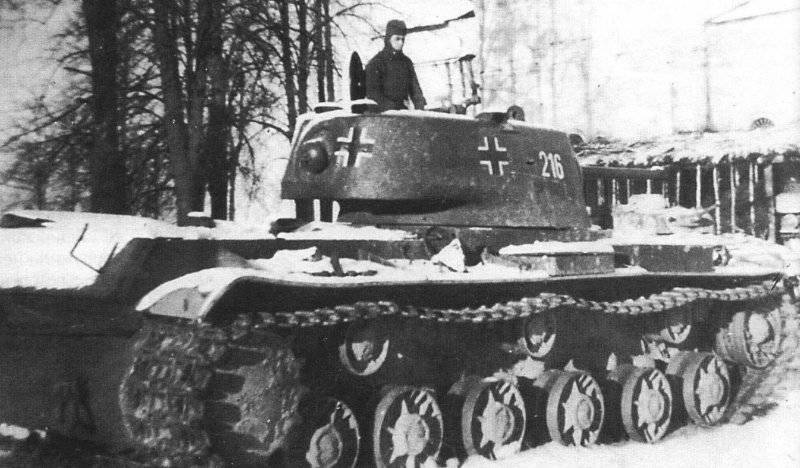 Very rarely captured Soviet tanks were converted by the Germans into self-propelled guns. In this regard, the episode of the manufacture of ten self-propelled guns based on the T-1943 tank at the end of 26 of the year can be considered the most widespread. Instead of towers, they installed 75-mm French cannons (7,5-st Rak 97 / 98 (f), covered with a shield. These machines entered service with the 3-th company of the 563-th anti-tank division. However, their combat service was short-lived - already 1 March 1944, they were all replaced by ACS Marder III.

There is a known case of conversion of the T-34 tank into a self-propelled anti-aircraft gun. The standard turret was dismantled, and in its place was installed a rotating, top-mounted, special welded turret with a 20-mm quad Flakvierling 38 installation. In the spring of 1944, this machine was listed as part of the 653 heavy anti-tank division of the Ferdinand self-propelled gun. 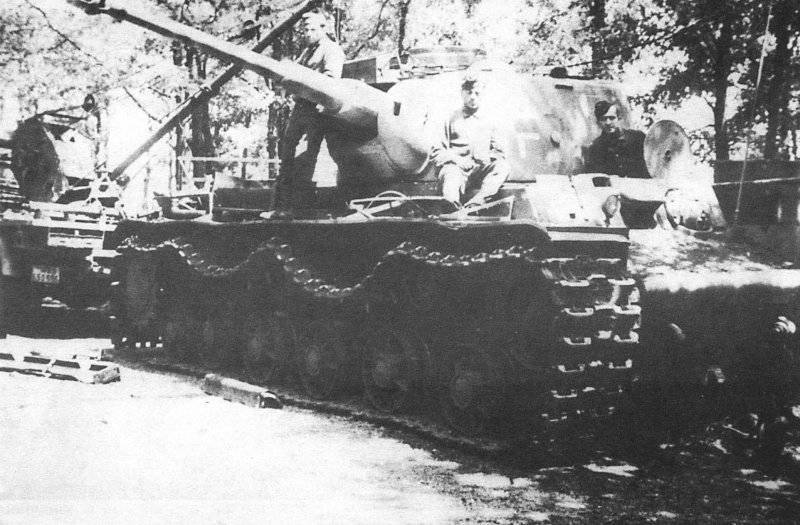 Installation of 75-mm tank gun KwK40 with a barrel length in 43 caliber in the tower of a captured Soviet KV-1 tank. Wehrmacht 22 Panzer Division, 1943 year 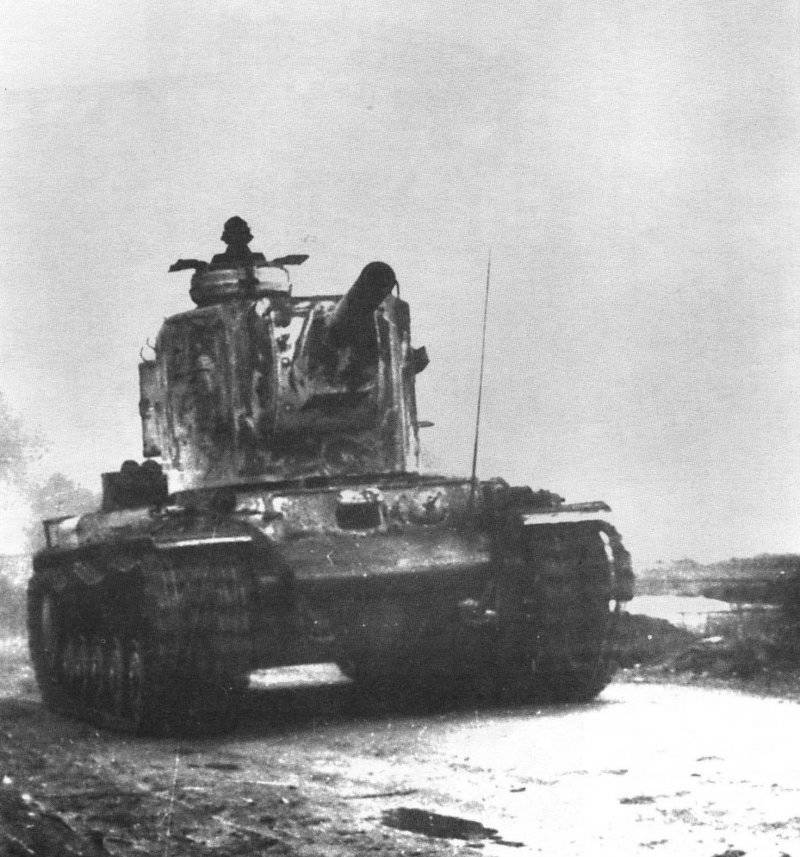 "Monster Stalin" - heavy tank KV-2 in the ranks of Panzervaffe! Combat vehicles of this type were used by the Germans in the number of several copies, however, judging by the photos, at least one of them was equipped with a German commander's turret

Of course, these data cannot be considered complete, as they most likely do not take into account the individual vehicles used outside the units of captured tanks, both in tank and motorized and infantry divisions of the Wehrmacht and the SS. 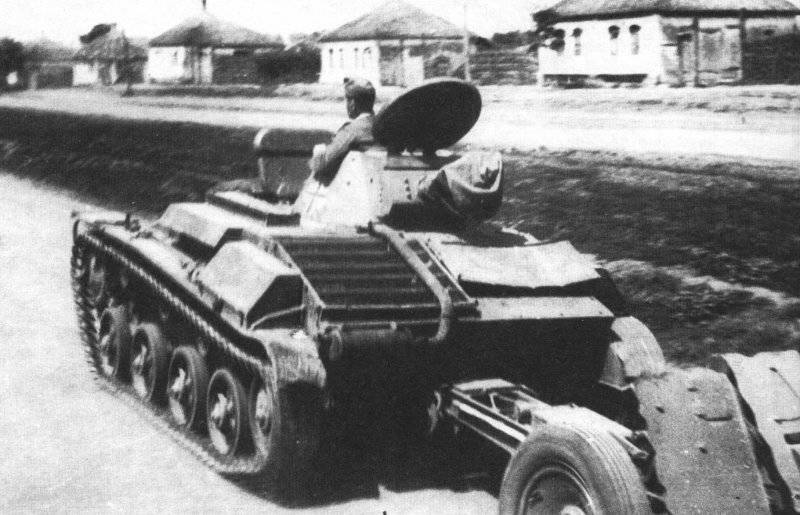 Trophy tank T-60 tows 75-mm light infantry gun. It is noteworthy that on this machine, used as a tractor, a tower has been preserved. 1942 year 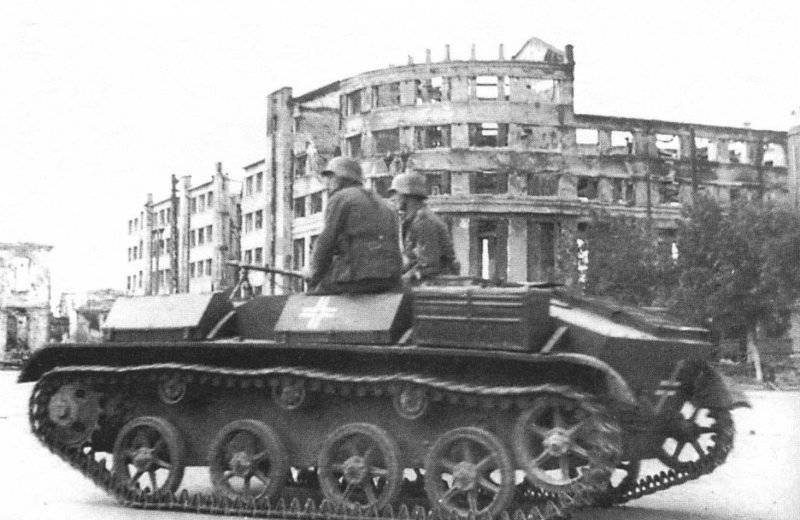 This turret-less, captured T-60 is used as a light armored personnel carrier armed with an MG34 infantry machine gun. Voronezh, summer 1942 of the year

In total, from June 1941 to May 1945, the German troops commissioned and used more than 300 Soviet tanks in fights with the Red Army.

Soviet armored cars were used mainly in those parts of the Wehrmacht and the SS troops that captured them, and even then this is extremely limited. Among the German armored vehicles operated by the Germans, mention may be made of the BA-20 - (Panzerspahwagen BA 202 (g), BA-6, BA-10 (wearable panzer), and the BA-203. purpose - for towing light artillery. A case of installing an 64-mm anti-tank cannon 37 / 35 Cancer behind a regular shield on a roof is known. 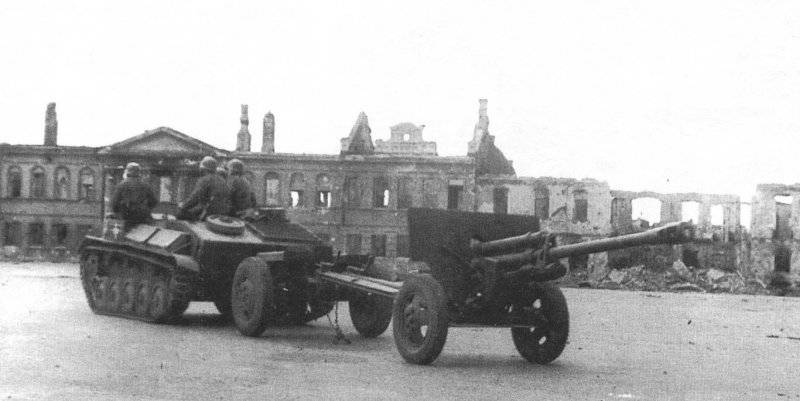 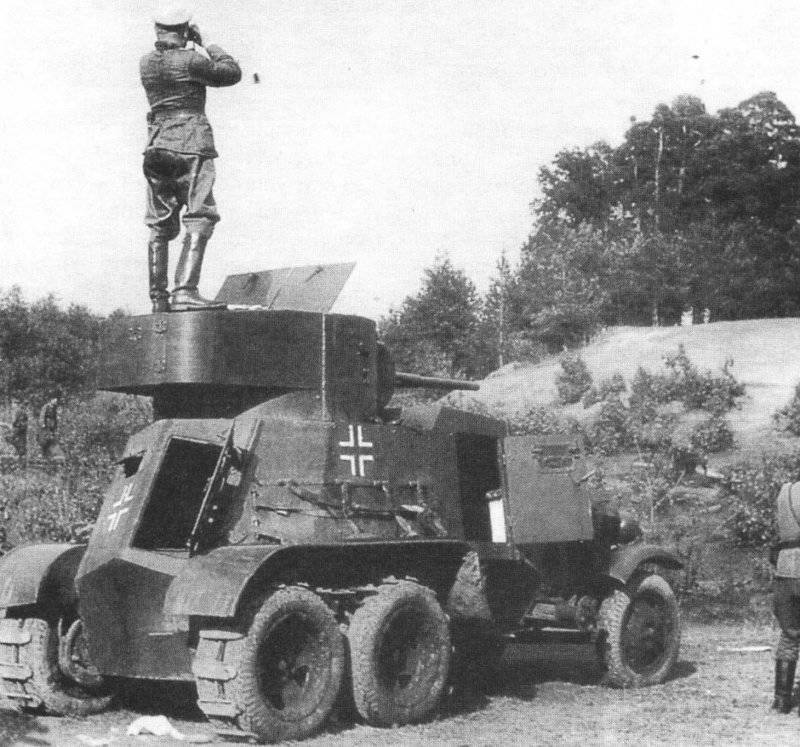 The German officer uses the BA-3 armored car tower as an observation point. 1942 year. Overall caterpillars are put on the wheels of the rear axles. 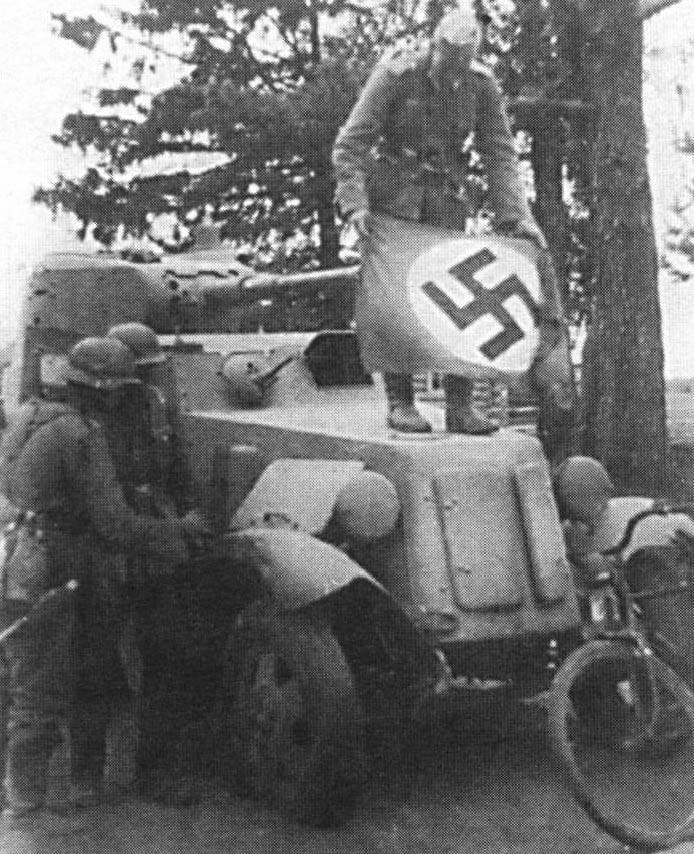 Preventing an attack of your own aviation, German soldiers in a hurry to fortify the flag with a swastika on a captured Soviet armored car BA-10