27 May 2013
23
First english a tankthat the Germans had inherited in September 1939 was Matilda I captured in Poland. This tank, handed over to the Poles for review and testing, eventually ended up at the Kummersdorf Wehrmacht test site.


In relatively large numbers, the Matilda I and Matilda II tanks fell into the hands of the Germans after the evacuation of the British expeditionary forces from the European continent. Subsequently, the Matilda tanks became Wehrmacht trophies in Africa and on the Eastern Front. These cars received the designation Pz. 748 (e). Their use was episodic. However, in Africa, a company of captured 8 tank regiments of the 15 German tank division, for example, operated seven Matilda tanks during the summer of 1941. At the same time, five Matildas were in service in the 5-th tank regiment of the 21-th German tank division. For several years, the tank "Matilda" was part of the 212 of the German tank battalion on the island of Crete.

There is only one case of conversion of the tank "Matilda" in the ACS. At the end of 1942, the available Hochsee-Lehrkommando tank was reequipped with a German 50-mm tank gun. In this case, the tower was dismantled, and the gun was installed on the roof of the hull behind the box-shaped shield. To the left and right of the gun on the shield were mounted two MG08 / 15 machine guns, designed for air defense and short-range defense. This machine was used in the development of combat training tasks. 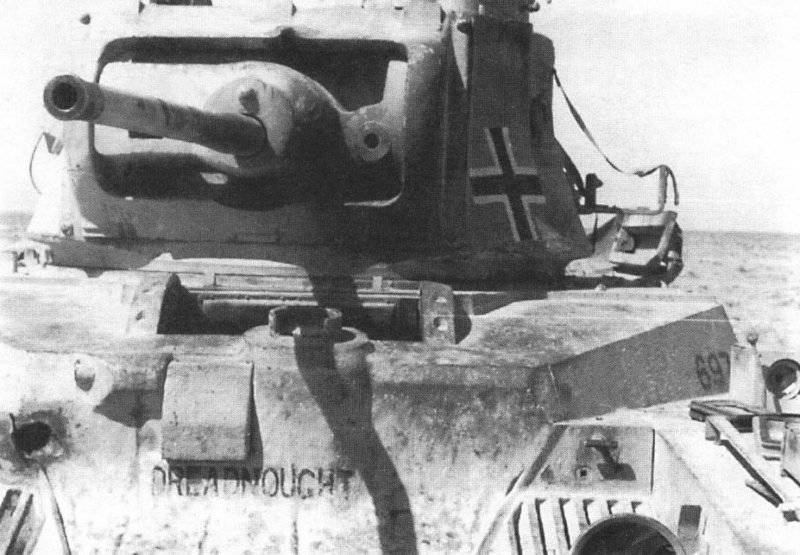 This tank Matilda, shot down by British artillery, was part of the 8 German Tank Regiment. 27 May 1941, the Germans captured seven tanks of this type, three of them were suitable for further use. North Africa, 1941 year 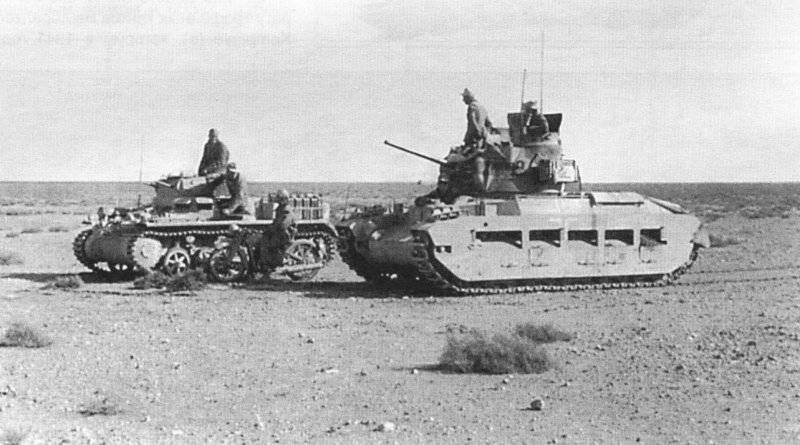 Tanks of the African corps: Pz.lAusf.B and trophy "Matilda". 1941 year

The rest of the British tanks, both infantry and cruising, which became Wehrmacht trophies, were used in very limited quantities - mainly due to the lack of spare parts for repairs, and often time to carry it out. The latter circumstance was characteristic, for example, for the African Corps.

The ability to "process" the English trophies was among the Germans actually only once - in the 1940 year. According to German data, in France, the British lost the 24 cruiser tank Mk I and Mk ICS, 31 - Mk II, 38 - Mk III and 65 - Mk IV. Some of them were technically sound, others required some minor repairs. Formally, all these machines were adopted, and they received the designation of the end-to-end Wehrmacht mobile weapons system. However, not a single captured car of the first three brands entered the troops. Several units were transferred to the Kummersdorf testing ground, including for the development of new models of anti-tank weapons. The fate of the captured Mk IV was somewhat different. Six cars (of which only one was on the move) were made available to the Armaments Office. But another nine Mk IV formed a company of captured tanks Beutepanzer-Kompanie (e), which in 1941 year was included in the 100 th flamethrower tank battalion. In its composition, the former British "cruisers" 22 June 1941, crossed the border of the USSR. However, their combat path through the Soviet land was not long. A month later, no car was listed in the 100 th flamethrower battalion. 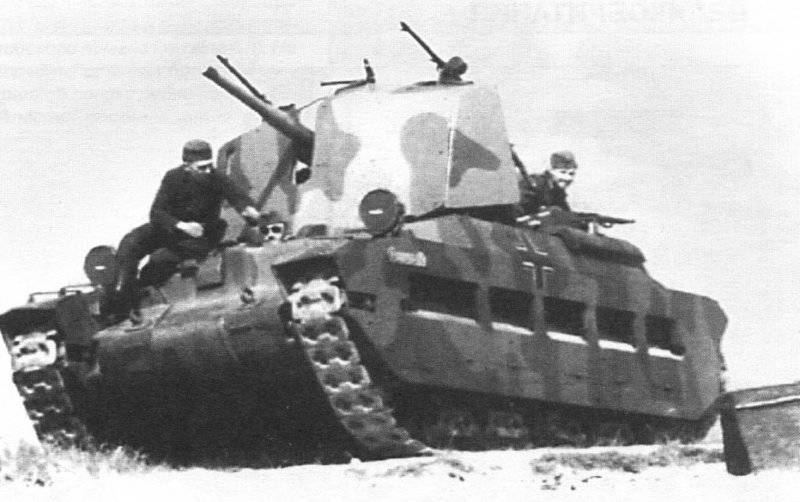 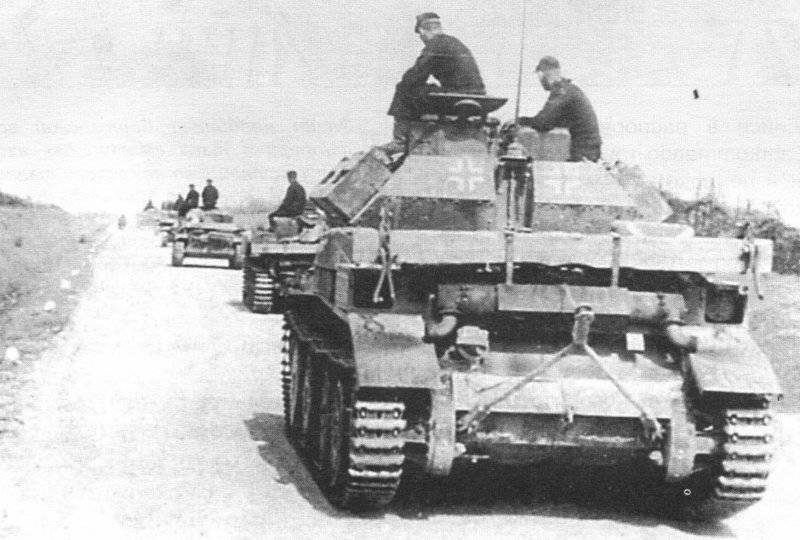 One of the "Crusaders" of a company of captured tanks of the German African Corps. 1942 year

The first Crusaders were captured by the Germans in June 1941 during Operation Battleaxe. Basically, these tanks were abandoned by the British due to technical malfunctions. After the repair, they became part of the Africa Special Forces Battalion 1942, formed in February, Panzer Abteilung zbV Panzer-Armee Afrika, fully equipped with captured tanks. Over the course of 1942, this unit constantly had a platoon of Kruseider tanks. Separate tanks of this type were used by the 5 tank regiment and the 605 anti-tank division. The battalion was armed with 12 Valentine tanks. In the platoon of captured tanks 605-th anti-tank division used another five "Valentine." The losses of the English captured vehicles could be replenished, since North Africa was the theater of the massive use of tanks of this type. It is curious to note that sometimes the units missing in the repair of British tanks were delivered from Germany. First of all, we are talking about weapons and radio stations. At the same time, a fleet of captured British tanks captured in France in 1940 was used as a “donor”. 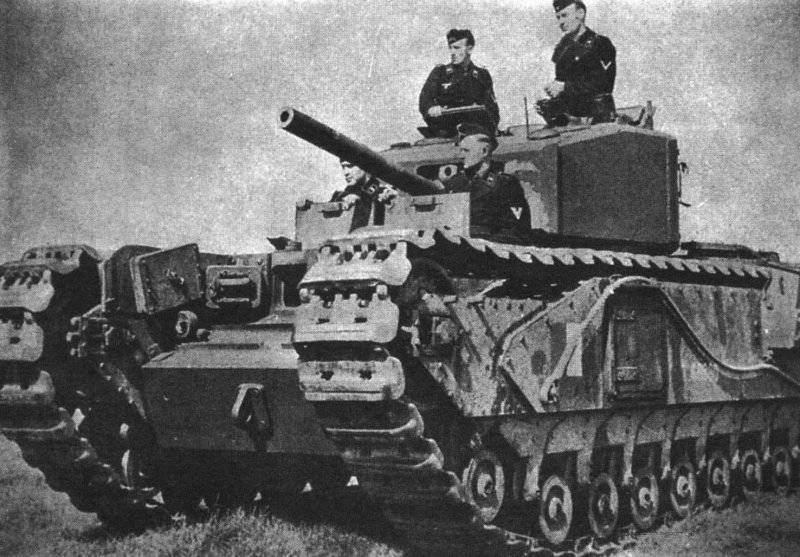 Tank "Churchill III" with a German crew. The Churchill's 23 was captured by the Germans while repelling an English raid on Dieppe 19 on August 1942. Most of them were not recoverable, but several machines managed to repair and put into operation the 81 of the trophy tank company. At the end of 1942, the company joined the 100 tank regiment, where two Churchill III served until the end of 1943. 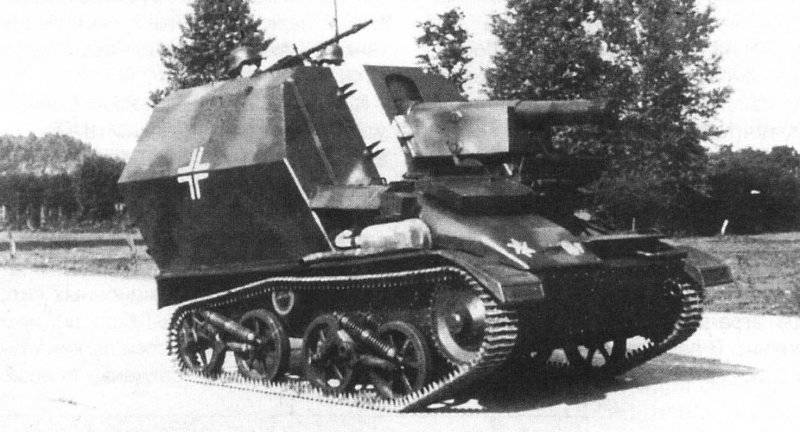 Another car on the same chassis is a carrier for ammunition.

In contrast to the French military vehicles, the British tanks in large numbers by the Germans were not altered. The only exception was the Mk VI light tanks: apparently, because these vehicles made up the majority in the tank fleet of British expeditionary forces, and the Germans captured them more than others. It was on the chassis of the light Mk VI tanks that the first Selbstfahrlafette (self-propelled gun carriages) of the Wehrmacht were created. The division of the already mentioned above Alfred Becker was engaged in their manufacture. This officer launched the Western campaign with the rank of captain, commander of the 12 battery of the 227 artillery regiment. He distinguished himself by the fact that after the seizure of Holland, using captured trucks, he transferred his battery from horse traction to mechanical. After the capitulation of France on the basis of his unit organized the manufacture of self-propelled guns. Naturally, his work would have been impossible without the support of the command.

Two types of self-propelled guns were made on the chassis of the Mk VI light tanks: the first was armed with an 105-mm light field howitzer leFH 16 and the second had an 150-mm heavy field howitzer leFH 13. In both cases, obsolete art systems from the period of the First World War were used. They were installed in the open at the top and behind the cabin, located in the aft part of the tank hull, in the place where the tower was previously located. A total of 12 self-propelled guns with a 105-mm howitzer and six with a 150-mm were manufactured. These vehicles entered service with the 15 battery of the 227 artillery regiment and the 1 battery of assault guns re-formed within this part. In addition to self-propelled guns, four vehicles of advanced artillery observers and 12 ammunition carriers were made on the base of the Mk VI tank. In this composition, this regiment in October 1941 year departed on the Eastern Front. He received baptism of fire in the area of ​​Leningrad, and, according to Germans, self-propelled guns were successfully used even for firing at Soviet tanks. The ACS in the English chassis fought on the Eastern Front until the end of 1942, when the last of them were lost. 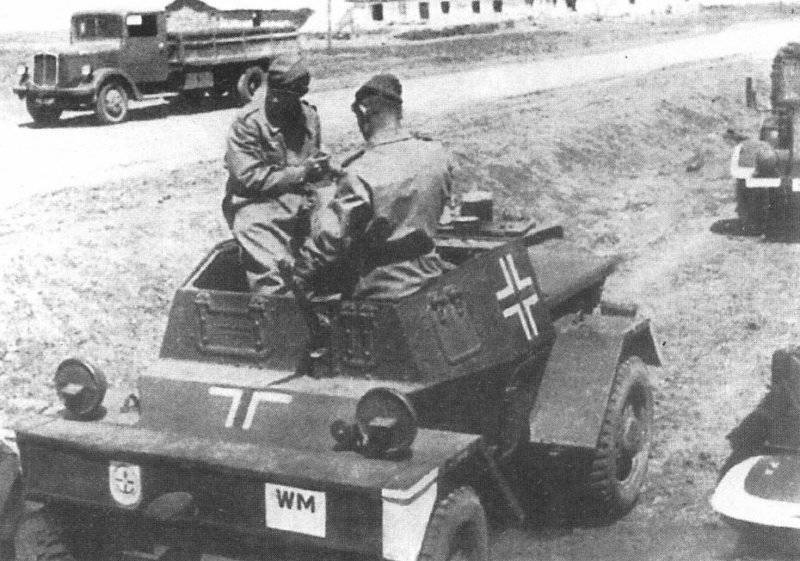 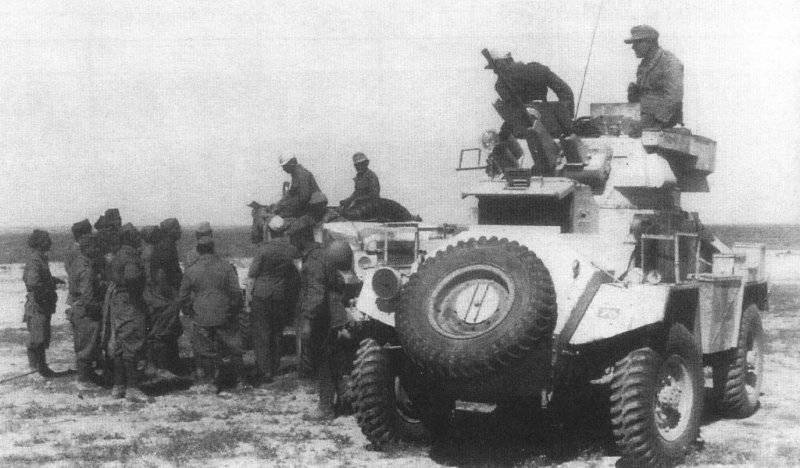 Experimentally, a self-propelled gun, armed with an 75-mm Cancer 40 anti-tank cannon, was created in the Becker unit on the chassis of the British Mk VI tank.

In 1940, the first English armored vehicles were captured in France, but subsequently they were not used by the Germans in the European theater of war, with the exception of Daimler Dingo Mk I (in Wehrmacht le Pz.Sp.Wg.Mk I 202 (e). captured English armored vehicles were used only in North Africa, and most often immediately after seizure - there was enough engine resource, spare parts, etc. These were mainly Marmon-Herrington armored vehicles of various modifications and Humber. Two armored buses were operated by General E. Rommel's headquarters AEC Dorchester. 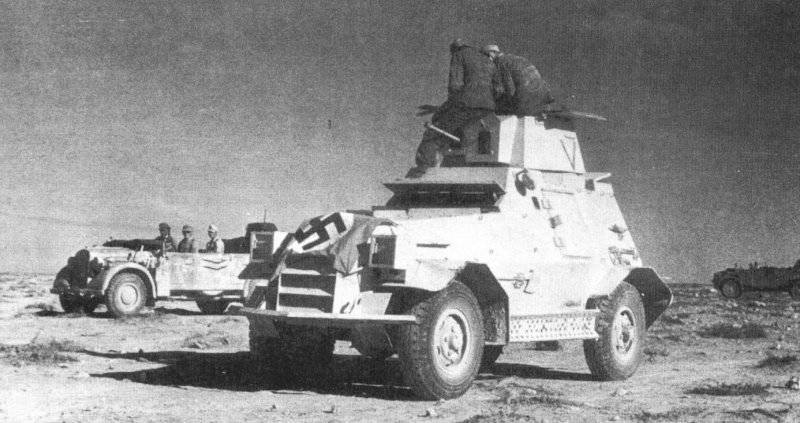 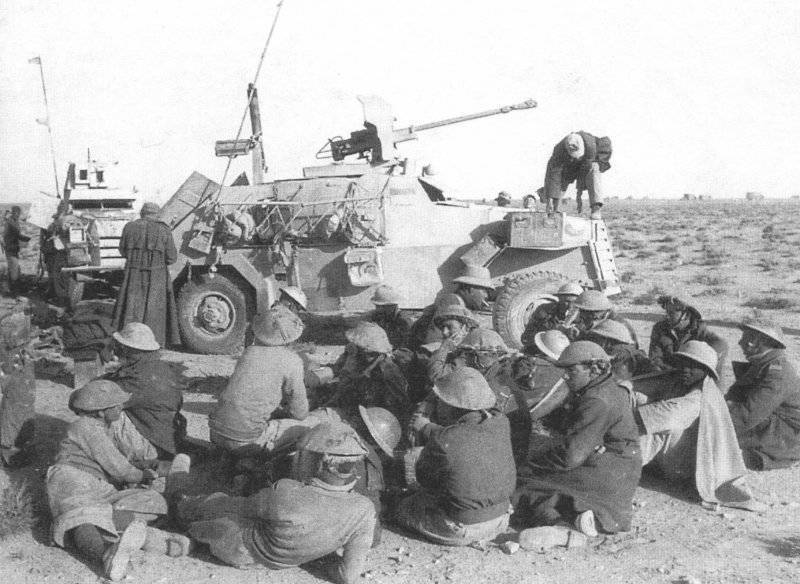 Captured British soldiers under the protection of captured armored vehicles Marton-Herrington Mk II (in the foreground) and Mk III. The armored car Mk II is armed with a 25-mm French anti-tank gun 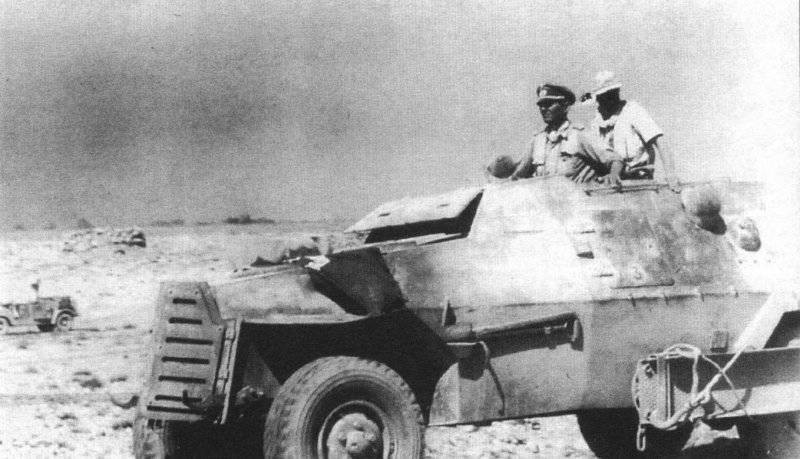 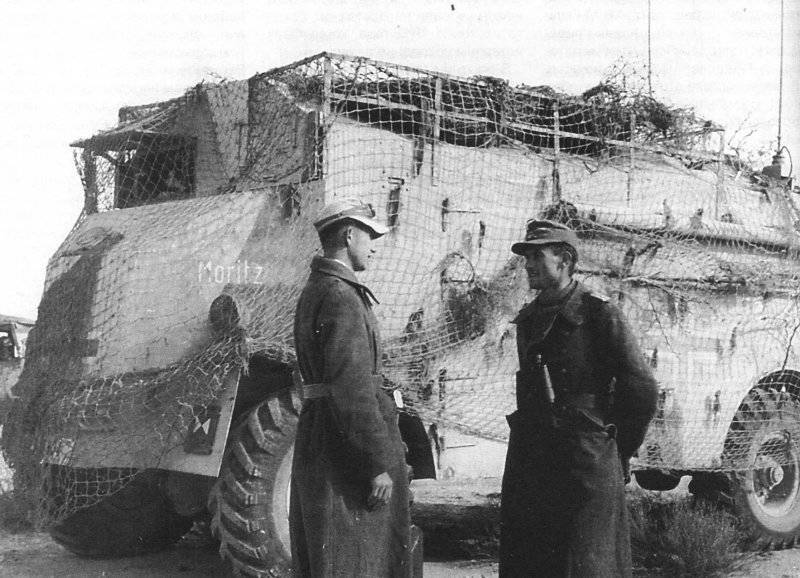 The armored English AES Dorchester headquarters bus used for its intended purpose by the headquarters of General E. Rommel, commander of the German Afrika Korps. 1942 year 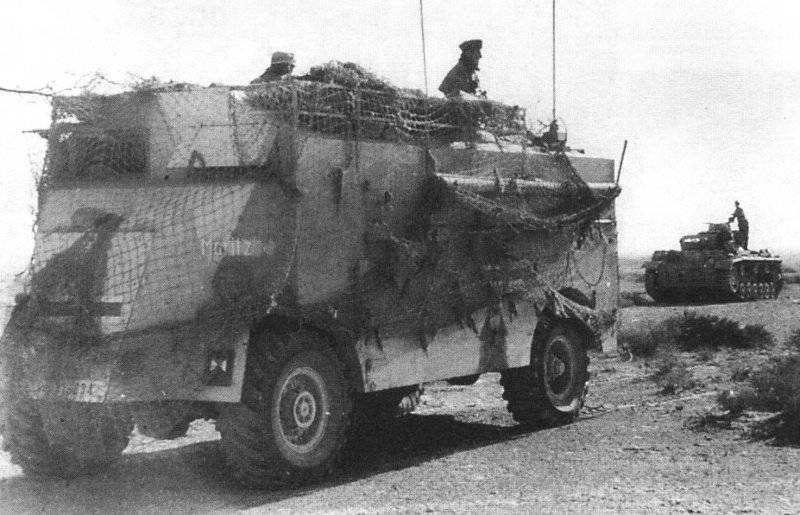 Rommel's trophy staff bus received its own name "Moritz", which was inscribed on the sides of the hood 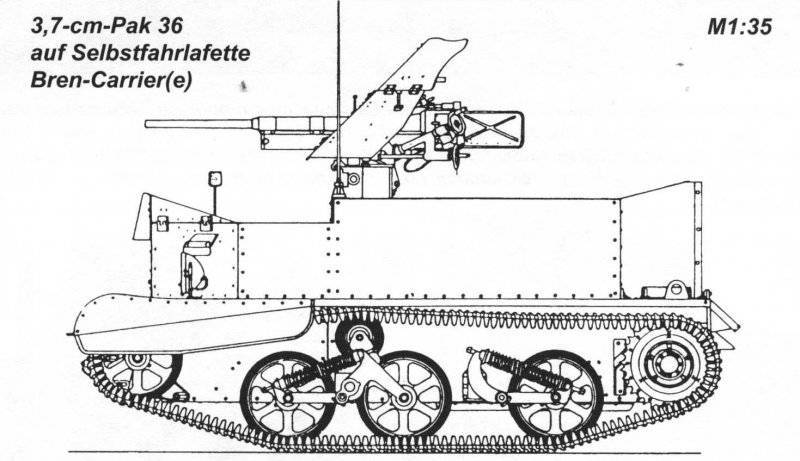 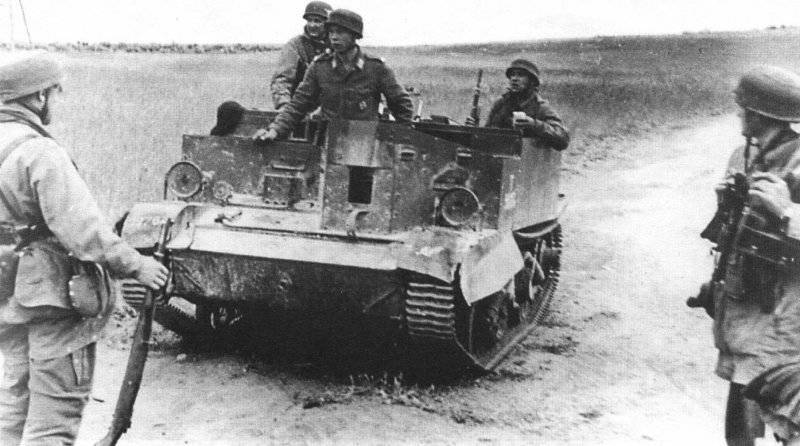