Is there a future for the Russian village?

27 May 2013
203
Is there a future for the domestic village? It would seem that when there was a state on the map of such a state as the Soviet Union, such a question was inappropriate. However, certain demographic problems in the Russian village (namely, the Russian) began to appear even when the collapse of the USSR could only have been imagined in a nightmare.


The initial decline in the traditionally high birth rate in the village, and then the massive outflow of young people from the village, is recorded in the results of the all-Union population censuses. The last Soviet census, which was held in January 1989, showed that the increase in the number of inhabitants of the Union was carried out solely due to a rather impressive increase in the population of cities (especially republican, regional, regional and district centers). And if the growth of the urban population showed up throughout the post-war period, then the number of villagers from the mid-fifties began to decline quite clearly.

If we talk about the period from 1959 to 1989 years, the urban population of the Soviet Union increased by almost 89 million people, but the number of rural residents during the same period of time decreased by more than 10 million citizens.

As specific examples of changes in the number of inhabitants in the RSFSR, it is worthwhile to cite data for several cities and towns and villages of rural importance. The choice will be based on their belonging to different regions and different groups in terms of population, so that the sample is more or less representative. So, cities: Moscow, Sverdlovsk (now Yekaterinburg), Khabarovsk, Pskov, Shilka (now Trans-Baikal Territory).

If you pay attention to other cities of the RSFSR, then in the overwhelming majority of cases it is precisely population growth that can be stated, especially if the city is a regional center.

The situation with the villages belonging to the Russian Federation (RSFSR) looks quite different. For example: Mazurka village (Voronezh region) - a decrease in the number of inhabitants by more than 1,2 thousands of people (with a population of 1959 in the year at the level of 2,6 thousands of people), Amelin hamlet (Kursk region) - a two-fold decrease in the number of inhabitants in a specified period Varin (Bryansk region) - a decrease in the number of inhabitants for the specified period by almost a third. Other examples show the same tendency towards a decrease in the number of the rural population, which began to manifest itself from the middle of the last century.
This trend with even more frightening numbers continues to manifest itself in relation to the rural hinterland of Russia today.
According to the latest data, in the Kursk region alone, since the collapse of the Soviet Union, more than a hundred and fifty villages and farms have become ghost towns. Most of them are no longer found on modern maps, and in reality they are looking at us with gaping eye sockets of broken windows, leaky roofs of dilapidated houses. The last old men, who remained here even after the public transport communication was stopped with the majority of the dying villages and farms, after all retail outlets were closed, and the medical attendants' offices were relocated at best to other settlements a couple of tens of kilometers from them, lived your age. Over three thousand villages of the Russian Chernozem region today are also ready to go into the category of ghosts for the simple reason that they live in (and this word is far from always appropriate, they rather survive) less than 10 people in each. Mostly deep old men. 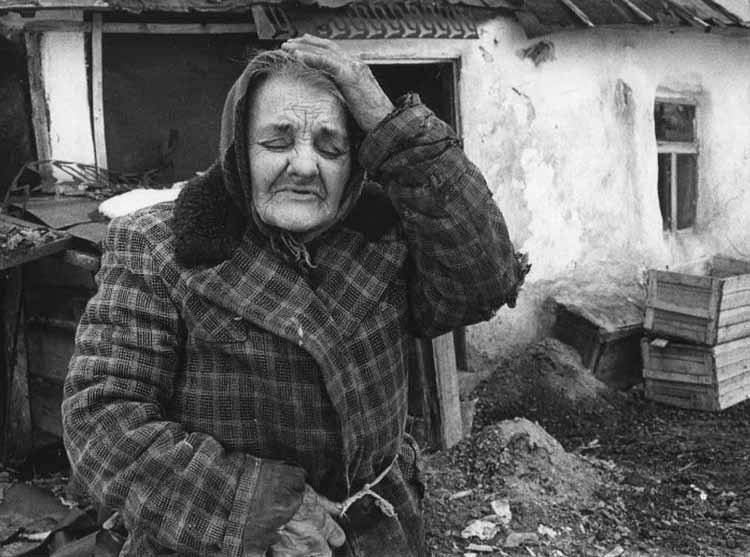 According to the testimony of local residents, the last youth left many villages of central Russia twenty years ago, and the old people were left alone with the conditions into which they were driven by fate.

A former resident of the Kursk region, now a resident of Moscow, Mikhail says:
He himself once came to Ryazanovo as a child. This is near Kursk. People enjoyed life. In the village there were many living creatures, equipment. Now is emptiness. Some old men. Scary to look at it. Without war everything is ruined. 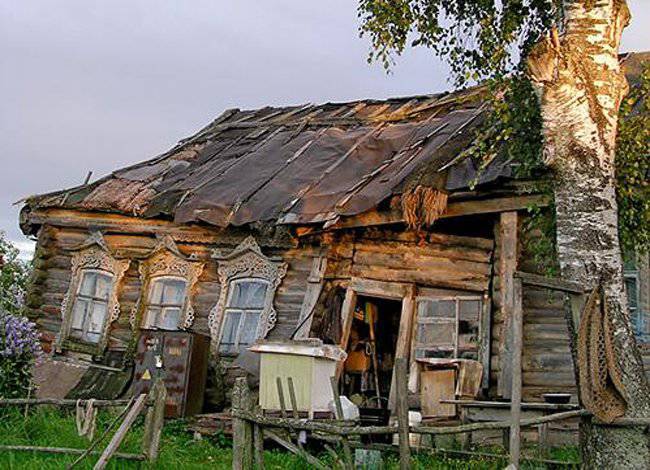 The former villager of the Oryol region, now a resident of the city of Voronezh, Igor, tells:
Came from the village to enter the agricultural. Naturally, I thought, I will come back, I will work as an agronomist. But then everything began to turn: the army, met his future wife, and remained in the big city. Now in their small homeland only on short visits. The old people live, the farm is looted, in the whole village one attribute of civilization is a red payphone. Once, my old man told me: they tried to call an ambulance on him, so at that end, when they found out where they were calling, they just hung up the phone - they say, to go far. I scold myself, of course. But now is the time. What would I do there now? Work - no prospects, too.

A former villager of the Voronezh region, now a resident of the city of Volzhsky (Volgograd region), Alexey:
Stayed in Volzhsky after the “deadline” at the beginning of the 90's. Immediately got to the factory. My people wrote to me from the village in order to come back and did not think: everything is falling apart, young people are knocking down the shaft to a better life in the city. I obeyed. In 2011, my father came to bury. Winter frost. There are no roads. Buses do not go. From the station I went to UAZ - somehow agreed on thousands of 3. Expensive, but there was no other way out. To dig a grave, a brigade was waited on a tractor from a neighboring village. The coffin and cross, they also had to lead. Agreed - to dig in the morning. Waited, waited ... Call - no mobile communication. He began to punch the way to the cemetery. By five o'clock in the evening two men arrived. They said that the tractor had to be repaired in a field in the snow. Buried with the help of God. In the village now there are two old men left. Painfully…

Of course, it is possible to condemn these people, to declare that they, to a certain extent, contributed to the extinction of their villages, but ... What a sin to conceal - many villages obviously didn’t voluntarily turn into corners of utter idleness. In the presence of enormous wealth in the form of fertile land, these same lands often simply have nothing to cultivate. The equipment left over from Soviet times turned into piles of rusty scrap metal, most of which was taken by metal hunters. Not everyone has private farmsteads, because in order to maintain livestock, you must at least have contact with the veterinarian, the ability to drive for feed, building materials (to maintain the same sheds in a more or less acceptable condition). It is obvious that not every family in the village has such opportunities. There were even fewer such opportunities in 90, when the collapse of the USSR hit the Russian countryside in such a way that not all and not everywhere could recover from this blow.

Bank loans? State subsidies? These are all, of course, beautiful words ... And in order to understand how far they are from the reality existing in the village, it is enough to “stroll” through the domestic outback. Even if a rural laborer takes a loan to raise his private sector, how will he pay the bank? No - of course, there are those villagers who have such an opportunity. But their units. Most of them are people who do not even have the opportunity to sell their agricultural products. After all, to find markets, you need to go at least to the district center, and there one road will cost more than three to five sold cans of milk. The way out is to unite efforts. But this also requires additional guarantees from local authorities, which, frankly, are often themselves deprived of any guarantees. That is why the situation is used by dealers who buy the same milk at the symbolic price of 4-5 rubles per liter, and then dairy products appear in city stores, which costs 8-10, or even more, times more expensive. The main profit settles in the pockets of intermediaries who openly parasitize on the work of others.
Local government at this level is in a faint and dizzy state. Everything, basically, rests on funding from the region, from the region, but the region and the region are also not eager to openly support the outback, realizing that access to net profit in this case, if it does, will not happen tomorrow or even the day after tomorrow ...

Seek investment from private companies? Similarly, private companies for the most part do not intend to work with lone farmers. They need guarantees of large deliveries of products, but no one can give such guarantees in the countryside today.
Another problem that pulls into the category of the unsolvable is the banal lack of workers. Even if farms are born in the villages, their owners and organizers are faced with a lack of agricultural star professionals. Most young people had time to migrate to the city in search of a better life. If someone returns, in the absence of work he has time to grow to the bottle, and such an employee, of course, will not gain much and well. So the farmers themselves have to act as chairmen, combine operators, tractor drivers, accountants, milkers, and ancillary workers themselves. Again, not everywhere, there are model farms, but it hurts a little - within the limits of statistical error. Much more, to the great regret, of drunk and ravaged villages living and working only in bureaucratic reports.

So is there a future for the Russian village? Yes there is! But in order for at least some perspectives in this plan to become apparent, it is necessary to carry out truly titanic work at the legislative level. To switch from state support of the agricultural producer in words to state support in practice. At the same time, plans to open hundreds of thousands of new jobs may well be realized, because only one peasant farm can employ several dozen people. And how many such peasant farms with state support could be opened and developed in Russia! At the same time, the state itself can only benefit from the development of the village, because the village is not only the possibility of income from the sale of high-quality products, but also a kind of traditional foundation of the country, its foundation. And if you continue to look indifferently at how this foundation collapses, then it is naive to believe that the rest of the building will stand ... 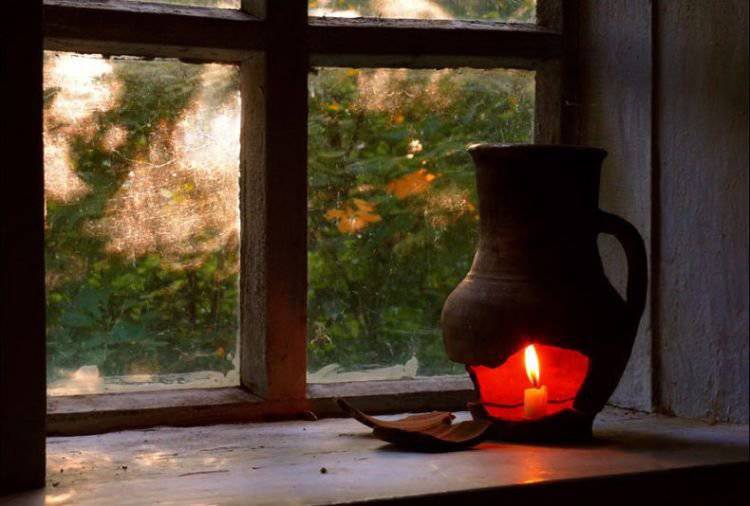 Ctrl Enter
Noticed oshЫbku Highlight text and press. Ctrl + Enter
We are
Report on the results of the survey-2013 "Evaluation of state political figures"
Military Reviewin Yandex News
Military Reviewin Google News
203 comments
Information
Dear reader, to leave comments on the publication, you must to register.