December 27 2010
1
One hundred grams of front-line, which were widely known as “Commissariat”, were introduced from 1 September 1941 by personal order of I. Stalin. The situation at the front at that time was catastrophic, and such a “doping” measure was quite adequate to the current situation. In the most difficult conditions of physical and psychological stress, the issuance of vodka was fully justified. The dose was calculated with the involvement of Soviet physicians and could not cause intoxication. Moreover, they are now forgetting that during the entire war the Narkomov hundred grams relied only on the front-line soldiers, they did not receive vodka daily loggers.

During the war, the standards for the production of vodka were revised several times. So on May 11, 1942, a decree was issued that ordered vodka to be issued only to soldiers of units conducting offensive operations. Vodka production for all advanced units was restored on November 12 before the Stalingrad offensive operation. At the same time, it was decided to replace 100 grams of vodka for the troops of the Transcaucasian Front with 200 grams of strong or 300 grams of table wine. On May 13, 1943, a resolution was adopted that again permitted the issuance of front-line hundred grams only to soldiers and advancing units. At the same time, what specific units and formations should be provided with vodka should have been decided by the leadership of the Military Councils of the front or individual armies. This decree lasted until the end of the war. The invariable days of vodka issuance for all military personnel remained only public holidays - only 10 days a year. It was the anniversary of the revolution on November 7,8, Constitution Day - December 5, New Year - January 1, February 23 - the Day of the Red Army, on the days of international May holidays - May 1,2, surprisingly, vodka was given on July 19 on the All-Union Day of Physical Culture , August 16 on All-Union Day aviation and on the date of formation of the corresponding military unit.

The name Narkomovskie 100 grams stuck to the daily vodka contentment, most likely from the time of the Finnish war. Then the idea to start supplying the army with not only warm clothes and shells came to mind Commissar K. Voroshilova. At that time, the Red Army was stuck in the snow of Finland, there were terrible chills, and to raise the morale of the troops Voroshilov ordered to give soldiers and officers on 100 a gram of vodka a knock, and 100 pilots a gram of brandy.

If you look deeper, the practice of issuing vodka to soldiers was also in the Russian Tsarist army. The so-called "bread wine" was received by the soldiers under Peter 1. And before the 1908 of the year, the lower ranks were supposed to receive three cups (160 grams) of vodka a week, non-combat 2 cups during the fighting. On holidays in peacetime, it was provided that 15 cups would be issued annually. In addition, there was a tradition in the army when the officer rewarded the distinguished fighters at his own expense. 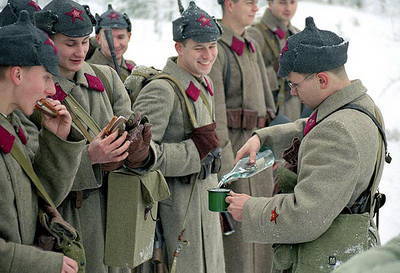 Nowadays, more and more disputes arise over the question when these famous Commissar 100 grams were issued, before or after the fight. From the point of view of the ordinary man in the street, drinking vodka was logical before the moment of the highest danger, that is, before the attack. It is argued that alcohol eliminates feelings of fear, insecurity and anxiety. Most people feel a sense of euphoria, a surge of mental and physical energy, become more active and active. At the same time, somehow not taking into account the fact that alcohol reduces the sharpness of perception, attention, reduces self-control. But all this applies only to the domestic situation, the fight in its essence is a terrible stress for a person. During a stressful situation, there are drastic changes in the metabolism, as a result of which a slightly drunk person instantly sober up, but a very drunk person and nothing in the attack.

Therefore, taking the front hundred grams before the attack, the fighter received virtually nothing. All the alcohol received by the body will be destroyed even before an attack of harmonious norepinephrine (anxious waiting hormone) or already during an attack by the release of adrenaline (an active hormone) and active muscular work. If you take a large dose of 250-300 grams before an attack, this will lead to the state of ordinary alcohol intoxication, and there’s little sense from a drunken fighter, even A. Suvorov said: “you should be killed before the fight”.

It is quite another thing to take vodka after the end of a stressful situation, i.e. after the attack. A person should not keep in himself a long-term internal stress without the possibility of throwing out the accumulated emotions outside and somehow burning the available energy by action. It is in this situation that the change of mood that alcohol consumption provides is best suited. The causeless ridicule, easy distractibility, the inability to think logically, all these signs of alcohol are able to protect a person from the inside. In this case, alcohol helps to relieve the tension accumulated during the battle. That is why the People's Commissar 100 grams were most often issued after the battle to those who remained alive, according to the pre-slaughter numbers of the unit.