December 25 2010
1
The FSB accused the GRU colonel in retirement of Vladimir Kvachkov in the preparation of an armed insurrection. According to the FSB Public Relations Center, a criminal case was initiated against the former colonel in the late evening of December 23 on the fact of an attempt to organize an armed insurrection and to recruit persons for terrorist activities. If his guilt is proved, the colonel faces imprisonment for up to 20 years. The specific actions of Kvachkov, which could form the basis of the charges are not disclosed. Attention is drawn to the fact that the arrest of the colonel passed after the order of D. Medvedev to connect the FSB to investigate the unrest on Manezhnaya Square.

But Kvachkov’s position in relation to these events looks innocent enough. 11 December he did not go to the square. After the events in an interview with the Internet radio station "Sturm", he behaved emphasized correctly. So to the question of the radio listener, “What would the colonel advise the Russian people if the situation resembled events at Manezhka?”, Kvachkov answered: “If I advise the Russian people what to do, then these will be 280 and 430 articles of the Criminal Code.” “The 430 article is an attempt to incite; 280 is a call for the violent overthrow of state power.” So think what you guys are asking, ”he said.

Kvachkov's arrest took place in his own apartment. After he was taken away, the FSB officers began a search, apparently looking for maps, plans and schemes for the uprising, which he allegedly prepared. The search was completed at night, several boxes of documents became the booty of the KGB officers, which apparently belong to the activities of the so-called “People’s Militia” headed by the colonel. 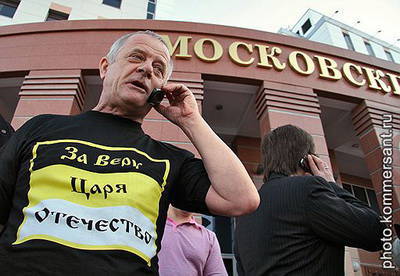 Kvachkova’s lawyer, Alexei Pershin, said that in the documents presented to him, it is said that the colonel “is being held as a suspect in a criminal case of appeals for armed insurrection”. This case has been in production since the summer of this year and was initiated against one of the members of the so-called “People’s Militia”.

Former colleagues of Kvachkov, who were with him in the case of the attempted assassination of Chubais, said that 90% of the members of this so-called “People’s Militia” are people aged 70 and older who could not physically participate in any uprising. The military has no confidence in this movement, and now, according to them, they fear more for the fate of those people who managed to join it. Kvchakov, they believe, suffered only for his rhetoric.

Kvachkov himself linked his arrest with the decision of the Supreme Court of 23 on December 2010 of the year, which confirmed the decision that the colonel was not guilty of the assassination attempt on Chubais. “One attempt to imprison me failed, they made another,” he said. In his opinion, the testimony of his colleague from Togliatti became grounds for his arrest. “According to the documents that I saw, a man armed with an arbalest in Tolyatti sent a group to Vladimir to organize an armed insurrection there,” said Kvachkov. According to him, the associate was the leader of the Togliatti branch of the “People’s Militia of Minin and Pozharsky”

Military publicist Vladislav Shurygin gave his comments on the arrest of Kvachkov to the Free Press publication.

- In my opinion, the arrest of Kvachkov fits into the campaign against extremism that is currently under way. In this regard, Kvachkov is a very convenient target, often unrestrained. His careless statements will help the FSB, without hesitating, to find a candidate for the role of the main extremist, and, as they say in the police, "cut down the stick." At the same time, I would treat the former colonel as not a completely healthy person. He participated in several wars, was in prison, now it is very easy to start. He needs medical observation rather than a camera in Lefortovo.

- Kvachkova and will continue to persistently "sew" rebellion?

- If the FSB to the whole country announced this, then of course they will continue to bend this line. Moreover, one can find enough speeches of the former colonel on the Internet, from which one can cut into any selection suitable for the position of the prosecution. 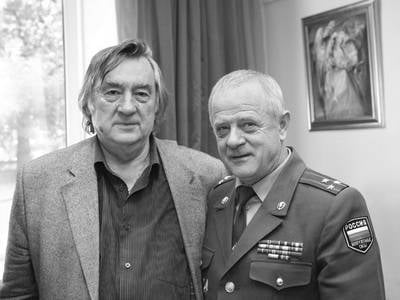 - Why do you think that the version of Kvachkov’s armed rebellion is nonsense?

- I don’t know what the investigators have at this stage, but I’m extremely skeptical about the idea of ​​the feasibility of the insurgency in the center of Russia, taking into account the capabilities of the existing special services. This is currently unlikely even in the Caucasus, where completely different connections between people and the work of the FSB is complicated by the presence of ethnic groups. In central Russia, the positions of special services are unshakable. They are able to control any more or less important political group. So I think if a person in such conditions is preparing a rebellion, he may not be completely mentally adequate.

- How will the public perceive the rebellion version?

- For him, Kvachkov is mostly a newsmaker who is able to provide scandalous informational occasions. Therefore, everyone will watch and wait for the second act of this drama.

- Is a military coup possible in our time?

- In today's conditions, the army is completely under control. There are no leaders left behind for her to follow. Leaders began to remove from Soviet times. Now the power acts as well. It is enough to remember how she reacted to the heroes of the two Chechen campaigns from Lebed to Troshev and Kazantsev. The only one who remained in power was the commander of the Airborne Forces, Vladimir Shamanov, but they besieged him from all sides. Now every general is being watched by military counterintelligence, in which one of the tasks is to monitor the top military leadership. And in the course of the past reforms, the army tried to clean up the disgruntled military personnel whenever possible, so there are simply no independent units that could lead people in the modern army.

Most likely, Kvachkov decided to make a "switchman." But then it is not clear one thing, why the Russian special services suddenly began to imitate the vigorous activity against extremism, instead of systematically and seriously engaged in this very struggle.