Russia and NATO. Problems and cooperation 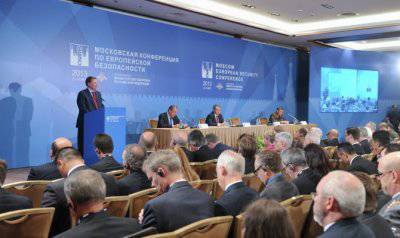 23 and 24 in May in Moscow hosted the international conference "Military and political aspects of European security." Representatives of several countries gathered to discuss the main issues relating to the geopolitical situation in Europe and come to a common opinion regarding their decisions. For obvious reasons, one of the main topics of the conference was the relationship between Russia and NATO. Despite the long-standing cooperation, our country and the North Atlantic alliance have a lot of disagreements that only complicate international relations.


It is a direct and open conversation about the existing differences, as stated by the Chief of the Main Operations Directorate of the General Staff, Colonel-General V. Zarudnitsky, can benefit the cooperation of countries. At the present time, according to Zarudnitsky, in relations between Russia and NATO there are three main problems that have a direct impact on all other processes. The first of these is the expansion of NATO to the east. After the collapse of the Soviet Union, the North Atlantic Alliance continued to grow. The composition of NATO is constantly expanding, and the organization’s military facilities are being built closer and closer to the Russian borders. Over the years, the problem of NATO expansion to the east remains one of the main stumbling blocks in international dialogue.

The second problem lies in the divergence of views on potential military threats. As the head of the main operational administration noted, NATO regularly conducts military exercises, the course of which directly hints at practicing actions to repel Russian aggression. At the same time, such exercises often take place near the borders of our country. Based on the specifics of the NATO exercises, it is not difficult to guess why Russia does not want to take part in such international events. Joint exercises of Russia and NATO are extremely rare and disagreement in the vision of threats is one of the main reasons for this.

The third problem in the relations between Russia and NATO is the lack of trust towards each other. A striking example of this problem can be considered the current work on the creation of a Euro-Atlantic missile defense system. The United States and Europe do not pay attention to Russian discontent and continue to bend their line. Naturally, such things do not improve the climate in the international arena.

Nevertheless, NATO and Russia agree that further building up military cooperation makes sense. The current situation in this area, despite the differences, allows us to make positive predictions for the future. Zarudnitsky said that now the cooperation between Russia and the North Atlantic Alliance is going in six main directions. First of all, it is a joint fight against terrorism. The second direction is missile defense. There are a lot of disagreements about it, but countries do not intend to refuse to continue the dialogue. In addition, Russia and NATO are cooperating in the fight against piracy, in search and rescue at sea, in logistics, as well as in the field of military academic exchanges.

In recent years, a situation has emerged in which the most well-known manifestation of international cooperation has been the numerous events around the Euro-Atlantic missile defense system. Despite the many statements of all countries involved in the negotiations and discussions, the general course of action can be described as follows. NATO continues to prepare infrastructure and build missile defense systems in Eastern Europe, and Russia continues to demand written guarantees of non-directionality of these systems against it. Over the past few years, everything is going exactly this way and because of this, the parties cannot find a common language.

As the head of the presidential administration, S. Ivanov, said at the conference, Russia intends to secure the signing of legally binding agreements on missile defense. Our country needs appropriate guarantees and therefore, according to Ivanov, full-fledged international agreements are needed, which, unlike scattered steps or loud statements, can really give the expected effect. In addition, Ivanov criticized the Western approach to the implementation of their plans. According to him, Russia is not satisfied with the policy of NATO in the form of the gradual implementation of its plans without regard to the opinions of others. This interferes with mutual trust and, as a result, worsens international relations as a whole.

Deputy Minister of Defense A. Antonov commented on the actions of the United States and NATO near Russian territory related to missile defense, with the words “there is no need to make a shot.” The deputy minister does not understand why the North Atlantic Alliance, allegedly solving its problems with Iran, is not afraid to quarrel with Russia. Antonov noted that due to the recent actions of the leadership of the United States and NATO as a whole, Russia does not have a clear understanding of Washington’s foreign policy priorities. Therefore, we need a predictable US foreign policy, which in the future will allow us to get rid of a lot of diplomatic problems. 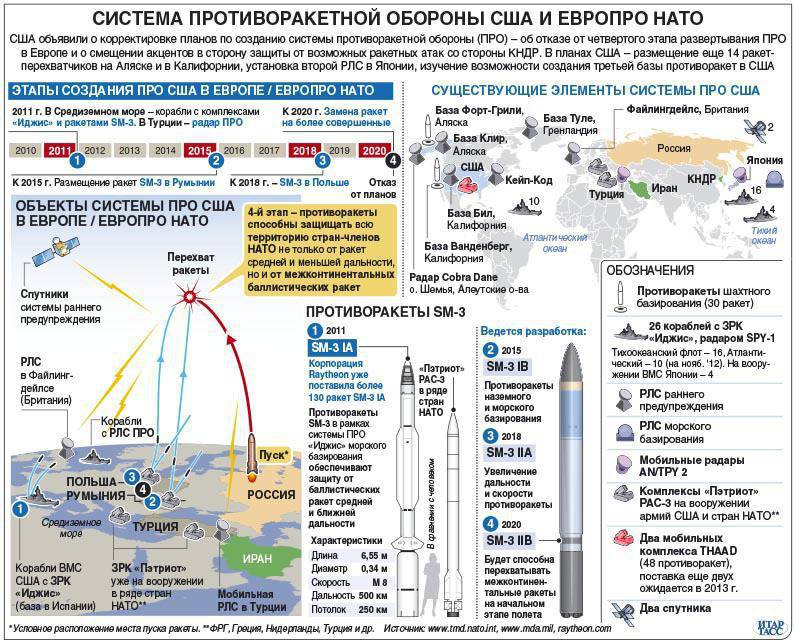 General of the Army V. Gerasimov, Chief of the General Staff, also spoke about the missile defense problem. He said that Russia would reduce its strategic nuclear forces only if the development of a Euro-Atlantic missile defense system could not undermine their potential. In addition, the state of the missile defense of foreign partners may ultimately affect Russia's opinion on international treaties. If the quantity and quality of anti-missile systems reaches a certain limit, then our country will begin to decide whether it will remain in the START Treaty or not. Gerasimov also confirmed that Russia is waiting for guarantees of non-directionality of the Euro-Atlantic missile defense system against Russian nuclear forces.

In the event that the current trends continue in the future, Russia has already created a certain set of military technical equipment that will neutralize the NATO missile defense system. According to General Gerasimov, this complex has already been developed and the military do not hide the fact of its existence. The implementation of the existing project will depend on how events in the international arena will develop in the future. If Russia still does not receive the appropriate guarantees, the deployment of the created systems will begin.

The official representative of the United States, Acting Deputy Secretary of State R. Gottemoeller, in turn, tried to reassure the Russian side. According to her, which exactly correspond to the official American statements of recent years, Russia should not worry about the future of its nuclear forces. The actions of the NATO countries will not be able to affect the state and potential of the Russian nuclear weapons. As for the problem of missile defense in general, Gottemoeller noted that cooperation in this field is of interest both for NATO and for Russia.

Another topic was also raised at the conference: the situation around the Open Skies Treaty. According to this agreement, 33 member states have the right to conduct observation flights over the territories of other countries included in the treaty. The Deputy Minister of Defense, A. Antonov, noted that last year, out of the flights permitted over 42 over Russia, other countries carried out 37. At the same time, over the other countries that signed the treaty, observation flights take place much less frequently. For example, the UK in 2012 was checked only three times, and Germany - two. Thus, it turns out that NATO countries use the Open Skies Treaty only as an additional way to conduct reconnaissance of Russian territories and objects.

NATO countries do not conduct observation flights over each other, but are only interested in the state of the Russian territories subject to inspection in accordance with the treaty. Because of this, a useful multilateral agreement cannot ultimately perform the tasks assigned to it to build trust between countries. On the contrary, the current state of the Open Skies Treaty may even worsen relations between Russia and NATO.

It is quite understandable that the last conference “Military and Political Aspects of European Security” by definition could not at once solve all the problems and differences existing in relations between Russia and NATO. However, the open announcement of claims to each other and their further discussion, of course, can have positive consequences. Now it is difficult to say which of the statements made at the conference will be the beginning of consultations and negotiations, but it can be assumed that the event with the participation of representatives of several countries will definitely not be ignored.

Ctrl Enter
Noticed oshЫbku Highlight text and press. Ctrl + Enter
We are
Situational analysis of the death of the MH17 flight (Malaysian Boeing 777), made on the basis of engineering analysis from 15.08.2014In Moscow, the exhibition "Interpolitech-2014"
Military Reviewin Yandex News
Military Reviewin Google News
22 comments
Information
Dear reader, to leave comments on the publication, you must to register.