29 May 2013
41
Russian roads and thaw spoiled the nerves of many of our enemies. But we ourselves often suffer from them. What, for example, will happen if the rocket tractor gets stuck in the mud with Topol-M? Who will help pull out a heavy truck with a dangerous load? And who should make it so that such excesses do not occur at all?


When the editorial board of the PM worked on the May issue, it was white-white outside the window. With snow-covered roads, endless fields, blown over by the March blizzard, we made our way to the location of the Teikov Division of the Strategic Missile Forces. There we were promised to show a car, which has no analogues in the world.

Indeed, nothing like this has ever happened before. The only thing with which this mighty four-axle vehicle can be compared is rocket tractors carrying intercontinental ballistic missiles. A machine of engineering support and camouflage (MIOM) appeared in front of us, the latest modification of which (MIOM-M) had just entered into service with the Russian army, or rather the Strategic Missile Forces. Such a machine should be unique, because there are no mobile installations with ICBMs anywhere else in the world.

But this topic is actively developing here, and along with the monoblock Topol-M in 2009, the RS-24 Yars with a split head began to take up combat duty. The emergence of a new generation of mobile ground-based missile systems (PGRK) inevitably led to the need for more advanced engineering technology.

Of course, we don’t know if the ICBM was ever stuck in the mud, but it is obvious that the cross-country qualities of rocket transport are limited. And if there is a need to redeploy the missile system from point A to point B on the map, then first it is necessary to find out whether the rocket technology can actually make this way and take a position at that point. Are there impassable swamps there, is the forest road marked on the map covered with trees, are there any other obstacles for the work of the rocket men?

All these questions are to be answered by engineering intelligence, and, of course, the relevant units have long existed within the Strategic Missile Forces. However, until recently, the technical equipment of these services remained, let's say, at an insufficiently high level. Engineering reconnaissance groups moved in the ordinary Ural army, and a large proportion of manual labor was present in the work of the sappers. Just one example. In the arsenal of the engineering units of the Strategic Missile Forces there is such a device as a penetrometer.

It is used to assess the bearing capacity of soils, that is, it can be used to find out whether the soil in the given area will withstand the weight of the rocket tractor, whether it can drive or even equip the starting position. In the old version, the mass of the penetrometer was 23 kg, which in itself is quite a lot, besides the use of the device was associated with serious physical exertion — the soldier had to drive a special barbell into the ground.

And the problem is not only in the wasteful use of the forces of a warrior, but also in the loss of time, which in all that relates to ballistic missiles and nuclear weapons, acquires special value. That is why it was decided that the engineering reconnaissance of the Strategic Missile Forces should get a new technique that will help carry out tasks faster and more efficiently.

The 15М69 (MIOM-M) machine was built on the basis of the MZKT-7930 “Astrologer” chassis of the Minsk plant of wheeled tractor, the same one that builds for the Russian army a number of heavy wheeled platforms, including Topoli and Yarsy ( chassis MZKT-79221). At MIOM, the 8 x 8 scheme is used, with two front axles fitted with steering wheels. The tractor is presumably equipped with a 500-strong 12-cylinder diesel engine. So, if the rocket tractor gets bogged down, MIOM has enough power to pull it from anywhere, and at the same time itself (of course, with the help of a winch).

The car has a three-section structure: in the front part there is a control compartment with a driver’s workplace, then there is a residential compartment (kung) for personnel and, finally, a cargo body. One of the main distinguishing features of the new engineering machine is a high degree of autonomy. It not only has a decent fuel reserve, but also provides for a life of eight people for three days.

By army standards, inside the Kung is comfortable enough - the premises for personnel resemble a compartment of a passenger train. Four beds for alternate rest calculation and a small kitchen. But why the car is such a big crew?

Everything will become clear if we simply list the functions that MIOM is called upon to perform and its calculation. Firstly, with the help of a machine, a check is made on the overall terrain. To do this, on the body are the so-called imitators dimensions. In the stowed position, they are folded, but at the command of the crew they deploy these structures at an angle of 90 °, artificially increasing the dimensions of the MIOM in width and height.

If simulators come across obstacles (for example, in the form of thick branches of trees), it means that the rocket tractor will not pass here and it is necessary to take measures to widen the passage. Soldiers work in rigging belts and with insurance: the height of the machine, even without dimension simulators, is 3,9 m. Secondly, the task of calculation includes a complex of radiation, chemical and biological reconnaissance of the area, as well as mine clearance of mine-explosive barriers. The machine is equipped with appropriate protection and allows you to overcome areas of contaminated areas.

Thirdly, the crew has to perform the tasks of disguise (masking means is undergoing tests). For this, MIOM is equipped with a cargo body where metal containers are stored. In just five minutes with the help of a compressor driven by a diesel power unit, the contents of the containers are transformed into inflatable models, identical in appearance and dimensions to rocket tractors. "False Division" is designed to mislead the observer from the height of the enemy.

Another masking device is a grader device mounted on the stern of the machine. It not only helps to cope with the snowy debris, but also ... gently covers the tracks of the rocket tractors just past along the snowy or dirt road.

And what about the penetrometer? No, now he no longer has to carry on himself. Evaluation of the bearing capacity of soils is carried out using a small cabinet, mounted directly on the nose of the machine. In the cabinet - hydraulic drive and pressure gauge. The calculation fighter bolts a long rod with a small round platform at the end to the drive rod and puts it in the ground. Now you just need to start the drive, which will begin to slowly push the bar into the ground, and look at the instruments. 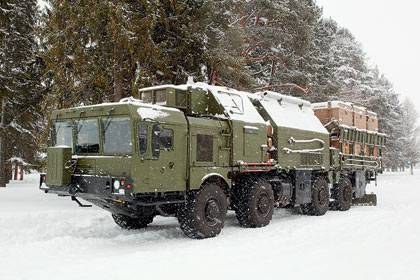 The photo clearly shows the three-sectional layout of the engineering machine. The highest part is the central living compartment. On the slope of the roof and on board the Kung, you can see the folded size imitators. 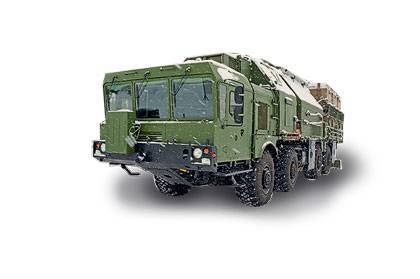 15М69 engineering and masking machine
The unit is designed and manufactured by the TsKB Titan (Volgograd).
Performs its tasks in the composition of the PGRK “Yars” or “Topol-M”, as well as independently.
Length: 15900 mm.
Width with traveling position: 3300 mm.
The mass of a fully equipped unit with a crew of 8 people: no more than 42 643 kg.
Maximum speed: 70 km / h.