Georgia under the "yoke of the empire." Reflections of the historian on the eve of the 230 anniversary of the accession of the Georgian state to Russia 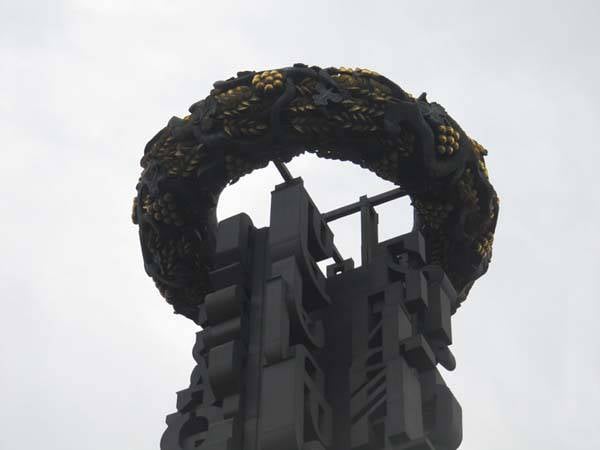 Visiting from time to time on Tishinskaya Square in Moscow, I can never get rid of the strange feeling of feeling some kind of loss. And the point is not that the famous Tishinsky market with its “collapses” and trade in seedlings has long been away here. Another thing is nostalgic: a monument in the center of the square. The monument is called "Friendship Forever," erected for the bicentennial of Georgia's accession to Russia. In August of this year, this event will be 230 years old.


Actually, the countdown is from the date of the signing of the famous Treaty of St. George - 4 of August (July 24 old style) 1783 of the year. It is quite possible that this year this anniversary will not attract much attention: politicians and experts have August, the month of traditional vacations. Although in Georgia there will surely be characters who will not fail to take advantage of the jubilee in order to once again pamper their hearts, accusing Russia of all mortal sins. The Lord is their judge, of course, but why the neighboring Orthodox state chose such a fate for itself is worth it to figure out.

It is clear that in modern Georgia, as, incidentally, almost everywhere in the new independent states - the former Soviet republics, today mythologized, rewritten to please the national elites of their own, stories. As a rule, black in them became white, good - evil and vice versa.

The centuries-old history of Georgia is shown as a succession of national genius, and joining Russia is a tragedy, the result of the treacherous machinations of the northern power.

Georgia has almost always been a peripheral region of rival major powers in its history. Western empires were consistently represented by Rome, Byzantium, and Turkey. The personification of the eastern empires was Persia (Iran). Later the northern empire - Russia entered the historical arena. Territories passed constantly from hand to hand. At the same time, periods of independence, of course, also existed, but for the sake of objectivity, it should be recognized that most often they were not long. Especially if you take a period closer to our time. In the century preceding the entry of Georgia into Russia, the Georgian principalities of Imeretia, Megrelia, and Abkhazia belonged to or were the dominance zone of Turkey, and Kartli and Kakheti - Persia.

In general, the current borders of all the states of the South Caucasus are the merit of Russia, because Georgia itself was part of the Russian Empire in parts, since it was not a centralized state by that time.

Turning to history provides the key to understanding modern processes. An unbiased look into the past unequivocally shows that it was during the period when these states were located under the auspices of the northern power (i.e. Russia) that many problems, including the security and socio-economic well-being of the majority of the population, were provided more efficiently than during periods when countries became dependent on their southern neighbors.

In principle, any empire seeks to maintain order in its provinces. This, in particular, is the political and legal peculiarity of the imperial form of organization of power. In our case, the Western and Eastern empires did not stop at nothing to support the power of the central government.

Only the movements of peoples during the times of the Persian Shah Abbas are worth something! For example, as a result of the campaigns of Shah Abbas to Georgia at the beginning of the 17th century, he only captured about 200 thousands of Georgians, and the losses of those killed amounted to 100 thousands.

Naturally, these Asian-based empires tried to rule out any force-majeure troubles unprofitable for their interests in their border peripheral zone. Moreover, this did not at all mean that the Asian southern empires thus established a strict order in the internal security sphere of their provinces in the Caucasus. Far from it: the predatory raids of the North Caucasian ethnic groups on Georgia were then quite common.

However, the problem is not limited to security. Georgia was also a periphery in the economic sense for these empires. In fact, what could Georgia offer in the empire markets in the past? Agricultural products. But after all, this product was abundant in other provinces of both Western and Eastern empires. And not just in abundance, but also of better quality. How could Georgian mandarins compare with Mediterranean peaches or Iranian pistachios ?! Georgia also could not offer any special original handicraft and industrial products to the markets. There were no rich deposits of natural raw materials, the development and operation of which would have been possible at that level of development of engineering and technology, in Georgia. Yes, Georgia gave such a valuable commodity as slaves to the southern empires, but this is just evidence of its negative periphery. By the way, it should be noted that the local political elites themselves often supplied slaves to the southern empires. And it was not always a "tribute by blood" in the spirit of the myths of the Greeks. The same Georgian princes were cynically enriched through the trade of their compatriots. Alas, there was simply no other “liquid” goods at their disposal.

Something similar can be said about resorts. The Mediterranean coast is still objectively better in this respect than the Black Sea. Therefore, in the historical writings of Greek, Roman and Byzantine historians we can find information, for example, on the Greek colonies on the coast of Colchis, but we will not find evidence that the metropolis knew to prefer to spend their holidays in these places. Economic comparisons of the income that the metropolis had from these parts of the empire, with other analogues, for example, Egypt or Syria, show precisely the relative underdevelopment of the provincial economies located in the South Caucasus.

In other words, in the composition of the eastern and western empires, Georgia was objectively doomed to rather unenviable stagnation in comparison with the rest of the provinces. The preservation of interest in this region from the central authorities of the empires was caused mainly by foreign policy factors. Georgia acted as a distant outpost of empires, a kind of potential battlefield with external enemies, and on such fields, of course, no one seriously and tried to organize a highly productive economy, because the risk of losing invested funds in the flames of new wars was too great.

Now let's see how the situation has changed after the region became part of the northern empire. Georgia remained the periphery. But what! In the markets of northern Russia, the products of the Caucasus agriculture were in the best demand.

And when, during the existence of the Soviet Union, the Bolsheviks also established the Iron Curtain, then similar protectionism in general made the same Georgian mandarins an exquisite delicacy of Soviet citizens. During the summer agricultural season, people made fortunes growing and selling their products on the markets of the Russian Non-Black Earth Region. And what profits did the holiday season bring? It was all in our memory. As a result, Georgia, precisely because of its peripherality in the composition of the northern power, the power of which guaranteed development security, turned into a prosperous province. So the current myths about the "yoke of the empire", "the prison of nations" will be left on the conscience of their authors.

In this sense - how good was the course of the political elites of Georgia, who wished to sharply break away from the northern power, to sever the integration ties with it? The rejection of the “humiliating” status of peripherality from their point of view turned out to be the loss of those undoubted advantages that were inherent in such a situation.

So maybe Georgia will successfully find its place in the new regional configuration? After all, Georgian historians claim that the Georgian nobility was able to embed their interests in the scheme of a strong patron, which Iran had been in the region for centuries. Some Persian rulers married Georgian princes, Persians, in turn, happened to marry Georgian princes. Georgian military leaders served faithfully under the banner of the Persian shahs, it suffices to recall the legendary George Saakadze.

However, we will not be in a hurry and let us remember what happened later, especially since this directly concerns the conclusion of the Treaty of St. George. When Safavid Iran began to weaken, especially during the rule of the Zenda dynasty in Persia (1750-1794), which did not rely on a powerful tribal basis, the rulers of Georgia showed their true face. King Heraclius II, the “ruler” of Kartli and Kakheti, therefore appealed to Russia to take him under the patronage, because he felt the decline of Persia. He didn’t understand this, because he lived for a long time at the court of Nadir Shah and even served in his army. It was for services to the Persians that the latter made him (after the death of his father Teimuraz) the king of the united kingdoms. But it was Irakli II who concluded the St. George treatise with Russia in 1783, that is, he practically recognized himself as a vassal of the Russian imperial court (article 1 treatise), which, among other things, meant the refusal of Georgians from an independent foreign policy (article 4). But, having received the promised military support from Russia, the Georgian king began to dabble and “abuse trust”: he arbitrarily started a war in the east, trying to seize the Persian provinces in the Caucasus, who also tried to get rid of the Persian dominion. And then - more. Irakli II, in violation of the St. George Treaty, already in 1786, separately concludes a non-aggression agreement with the Turkish Suleiman Pasha. It was a direct blow to the interests of Russia, because it was not from altruism that concluded the Treaty of St. George. The latter was supposed to guarantee the alliance of the Georgian elite in case of wars. Russia only in 1774 ended the war with Turkey with Kyuchuk-Kaynardzhsky peace, and in 1787, a new war broke out. And here is a betrayal! However, the rulers of Georgia soon paid for it.

Empress Catherine the Great withdraws her troops from Georgia. A new dynasty came to power in Persia - the Qajars, whose shahs came, incidentally, from the very Eastern Caucasian provinces to which Irakli II had so carelessly fought (Kajars are an ethnic group of Turkic origin).

Shah Aga-Mohammed immediately in the 1795 year went to war against Georgia and easily defeated hastily assembled Georgian army on the outskirts of Tiflis. Several tens of thousands of Georgians paid dearly for the “diplomatic throwing” of their ruler.
Heracli II also suffered a political defeat: he was retiring from power, handing it over to his son George XII. He once again appeals to Russia, and the sent Russian troops drive out the Persians. The new Georgian king, trying to make up for his father’s mistakes, no longer requests the protection of Russia, but its entry into its structure. After that, those “two hundred years of friendship”, immortalized in the monument on Tishinskaya Square, came.

The Georgievsk treatise saved Georgia, but did not save its rulers from the pernicious habit of playing with the fate of their people. It is this habit and led to the current sad consequences.

Ctrl Enter
Noticed a mistake Highlight text and press. Ctrl + Enter
We are
Soviet Georgia: now it is called "occupation"Stalin and the wind of history
80 comments
Information
Dear reader, to leave comments on the publication, you must to register.