How Fidel became the Hero of the Soviet Union 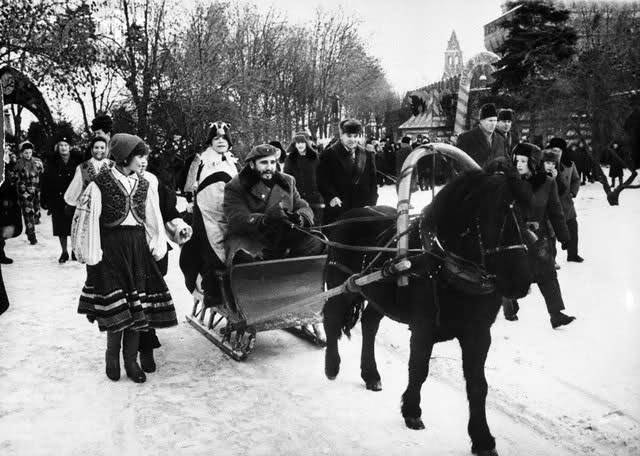 Fifty years ago, on May 23 of 1963, the Soviet radio - at that time the most rapid means of propaganda - solemnly announced the appearance of another Hero of the Soviet Union. They were not our cosmonaut, test pilot or polar explorer, but ... Prime Minister of the Revolutionary Government of the Republic of Cuba, Major of the Cuban Armed Forces 36, Fidel Castro.


The Cuban leader at that time visited the Soviet Union and personally received an award from the hands of the Chairman of the Presidium of the Supreme Soviet of the USSR Leonid Brezhnev. In honor of the Cuban leader, beloved and respected by the people of the USSR, a stormy 100-thousandth rally was held at the Luzhniki Stadium. People shouted toasts in honor of the Soviet-Cuban friendship, the tribunes were full of slogans, music was rattling, helicopters with flags of two countries were patrolling the air. And it was quite a sincere expression of feelings!

The Caribbean crisis that broke out a few months ago left scars on relations between the two countries. Fidel was offended that the First Secretary of the Central Committee of the CPSU did not inform him personally about the decision to remove Soviet missiles from Liberty Island. “Khrushchev should have said:“ We need to discuss the problem with the Cubans ... ”recalled the commandant later. - It was then that our relations with the Soviet Union deteriorated. And for many years this conflict has influenced our relationship. ”

We needed detente, proof not faded away, but still burning friendship, a continuation of the political banquet. And it followed - in the spring of sixty-third, Khrushchev invited Castro to Moscow. This unprecedentedly long - 40 days! - The visit lasted from April to June and included trips around cities and villages of the USSR, top-level negotiations, various meetings and discussions. However, this is not an “All-Union” record - the head of the Chinese Communists, Mao Zedong, arrived in the Soviet Union on December 16 1949, and returned to Beijing only on March 4 of the year 1950!

Castro's visit was official, but the guest often behaved not at all officially, but rather simply emphasized. I traveled on a tractor, went down to the mining face, skied, played hockey, hunted, raced on a troika with bells. He said that he thought, spoke without paper. Fidel was nothing like boring party workers, whose speeches were glued together from boring slogans and dusty quotations.

Perhaps not a single distinguished guest of the USSR did such extraordinary and even sometimes extravagant acts, he was so frank, sincere and benevolent.

He tirelessly plowed the Soviet Union and everywhere - in Murmansk, Bratsk, Volgograd, Kiev, Tashkent, Leningrad ... - this huge, smiling bearded man in a military jacket, like either an epic hero, or an alien from some romantic world waited a full house. And no one drove the Soviet people to the meetings with Castro under the fear of all sorts of educational measures, they went on their own. And then they fled.

The Cuban guest was not limited to official receptions and reports of local strictly instructed bosses, but, as they say, he went to the people, was interested in his life, problems and interests. This caused a severe headache and constant fear among the owners: what if someone blurts out too much? Or the guest himself will tell them something “wrong”?

This is what happened.

One day, Castro, who stopped in the Kremlin, suddenly decided - although it was already midnight - to stroll around Moscow, which caused quite a stir. He with a translator and a duty officer — the security simply did not have time to react — went out through the Borovitsky gate and immediately got into the ring of the late Muscovites. With each meter, they became more and more, and everyone strove to touch Fidel, to exchange with him, if not a couple of phrases, then at least a smile. The main question: "Will Cuba withstand the onslaught of the United States?", Castro invariably parried with an affirmative nod.

At first, this confusion seemed funny, but when the crowd grew to incredible proportions, Fidel’s entourage was horrified. It seems that the jubilant Muscovites are about to tear the guest apart for souvenirs.

However, the Moskva hotel that arose on the way of the commander and his companions becomes a salvation. They hide behind the doors, and the escort officer turns the telephone dial with shaking hands, calling for reinforcements.

Castro, not wanting to go the beaten path by local authorities, often changes the route. For example, in Tashkent, he suddenly decided to look into a local department store. There he buys a belt for trousers and goes to the checkout, for which he immediately sat down ... Minister of Commerce of Uzbekistan. This is where the comedy of errors begins. First, the official can not cope with the handle of the cash register. Secondly, a noble buyer falls asleep to the Minister with questions that put him in a dead end. From the cashier, literally, seven times, until he finally gives out a check to Fidel.

Did the Cuban leader know about the "setup"? There is no answer to this question.

It is only known that Castro was angry at the sadness of officialdom and the pretense arranged in his honor. At the final banquet in Leningrad, he gave vent to emotions.

“You do a lot of things in order,” Fidel said, frowning. - You are laying the subway, but suspended such important work because of me, so that the motorcade of our cars would pass. But I am not proud, I could go on a detour. Why do I need to arrange props, the more I understand that Leningrad is a city of martyrs, just recovering from wounds inflicted by war. Does he not have the right to show his faults? You accept me as an Arab sheikh! But so friends do not meet! "

It was evident that the famous revolutionary was more in touch with the common people than with the party bosses, who looked cautiously and pleasingly into the eyes. The conversation with fishermen, collective farmers, steelworkers, dockers and polar explorers turned out to be much more sincere and heartfelt. Even in spite of the fact that KGB officers were spinning everywhere.

In the Ukrainian village of Castro asked to stop at the pig farm, where he started a conversation with a woman named Maria. At first the conversation flowed quite trivially, but suddenly Fidel asked the pigsty to show him his house. An embarrassed woman leads a distinguished guest to a hut and collects some simple treats on the table - bread, pickled apples, eggs, lard, and potatoes. But the main attribute of the festive feast is not enough, and it is not known how the party authorities will react to it. Finally, Mary, overcoming torment and fear, puts a bottle of moonshine on the table. Fidel, under the general laughter, willingly inserts a glass ...

At the Siberian station Winter Comandante train surrounded a crowd of lumberjacks. When he heard the noise, he stepped out of the car into a freezing frost, lightly in a single tunic.

Someone threw a padded jacket over Fidel's shoulders, and the touched Cuban offered the donor several cigars as payment. The lumberjacks, looking incredulously at the present, lit a cigarette and, after a drag, gave the right to tasting their comrades. “No one in the West would have behaved like that,” recalled the commander later. “Everyone, no matter who got the cigars, hid them in his pocket.” Now I understand why the Russian people are invincible. ”

By the way, the original visit of Fidel Castro to the USSR was to end on May 20. However, the guest, much to the surprise of the owners, announced that he wanted to extend his stay in a friendly country. He explained his desire that he wants to know better the country and its people.
The Cuban leader came to the USSR several times, meeting with the leadership of the country. But for the rest of his life he remembered exactly the trip of sixty-three years.

After more than forty years, Castro will say that then he “recognized the Russian man, and realized that this is the most peaceful people. Because he knows the most about war. ”