Russian expert: Korean nuclear missile can already hit the US 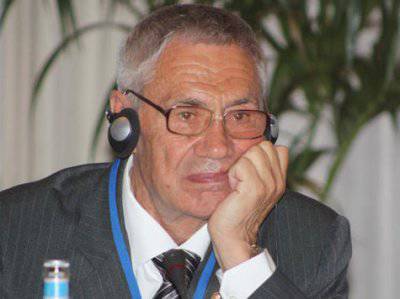 The meeting of the expert council of the International Luxembourg Forum on Preventing Nuclear Catastrophe began with sensational statements.


The information bomb exploded during the very first speech at a meeting of the expert council of the International Luxembourg Forum on the Prevention of a Nuclear Catastrophe in Switzerland. One of the leaders of this organization uniting the world's leading experts in the field of nuclear nonproliferation weapons, retired Major General Vladimir Dvorkin told colleagues that, according to objective data, today more than two dozen countries, including North Korea and Iran, have potential carriers of nuclear weapons.

This speech, by the way, became available to the correspondent of “MK”, who was present at the summit, quite by accident. All other reports of the conference participants were closed to the press.

For non-specialists: the unusualness of the Dvorkin report was that the policies of the leading world powers and international governmental organizations, establishing public “red lines” for countries with authoritarian regimes that are rushing for nuclear weapons, declare that even if the rulers of these states have nuclear weapons, then it will take more years to create carriers for its use ...

As an example, the Russian expert cited the technical characteristics of ballistic missiles and aircraft that are in service with the armies of North Korea and Iran. Particular attention was paid to the effectiveness of the North Korean rocket scientists. Their Tephodon-type ballistic missile could launch a satellite into orbit after just two emergency launches. Such a breakthrough did not succeed, in its time, neither the USSR nor the United States. Moreover, in its energy sector, the Korean rocket may well carry nuclear charges, at distances close to intercontinental.

The fact that such an assessment differs from the official opinion of American experts was confirmed by a well-known American diplomat Mark Fitzpatrick immediately after the Russian general Mark Fitzpatrick, who had worked in the US State Department for about a quarter of a century and now occupies an important post in the International Institute for Strategic Studies.

According to Fitzpatrick, American experts are of the opinion that, in the current configuration, the Korean rocket is not able to deliver a nuclear charge to the US.

Dvorkin replied, “as at closer distances, there are several states near Korea that she considers enemy”. Moreover, according to the Russians, given the incredible pace of development of the Korean rocket program, the improvement of Tepkhodon is only a matter of time. And in the current state, with minimal modifications, they can throw a nuclear charge weighing at least half a ton towards North America ...

As for Iran, this country, as was said at the conference, also has on its account a satellite launched. But the Persian rocket, according to estimates, cannot yet be equipped with a nuclear warhead. True, a completely different picture is observed with medium-range missiles.

In particular, "Shihab-3" may well carry a nuclear charge. The situation is similar with the "obsolete" "Scuds", with a range of 369 kilometers, in service with dozens of non-nuclear states. They can also be equipped with nuclear warheads. However, according to the Russian expert, ballistic missiles are far from the only means of delivering non-conventional weapons. For example, the new Azaraxh and Sägih fighters, which are still little more than a dozen in service with the Iranian Air Force, have a payload of 4.4 tons, and with these characteristics there is not even a need to minimize the mass and size of nuclear warheads ...

Another, no less sensational information that sounded at the expert council meeting was the fact that, for objective reasons, the IAEA inspectors today do not have the technical ability to solve the tasks of instrumental monitoring of potential nuclear weapons carriers. According to experts of the International Luxembourg Forum on the Prevention of Nuclear Catastrophe, this problem can be solved only by creating a special international center, where telemetry data and operational information about launches in different countries of the world would flow.

Time will show whether the leaders of countries that are members of the World Nuclear Club will support the initiative of a non-governmental organization. But one thing is clear: there is no reason to distrust the conclusions made during the meeting of the expert council of the Luxembourg Forum, which includes famous scientists and world-renowned experts.

Apparently, the threat of an unexpected nuclear conflict in the world today is much more serious than we imagine, or at least how we would like the politicians to imagine.

Summing up the summit, the President of the Luxembourg Forum Vyacheslav Kantor, in an interview with the correspondent of MK, noted that “in public practice the topic of tolerance is widely used, however, it no longer meets the challenges of the twenty-first century. In this connection, it is necessary to supplement this concept with the topic of security. Conduct "boundaries of patience" and determine the conditions when tolerance threatens society. "

From conversations with other participants, the lance was clear that they were also confident that the suppression of attempts to covertly master nuclear weapons should be made more tough decisions than the corresponding resolutions of the UN Security Council, which, as experience has shown, can be ineffective - in particular, bans for Iran to enrich the uranium formulated in these resolutions.

Under these conditions, Forum experts intend to develop clear criteria for what can be defined as the limits of nuclear tolerance.

Who participated in the meeting of the advisory council of the Luxembourg Forum: