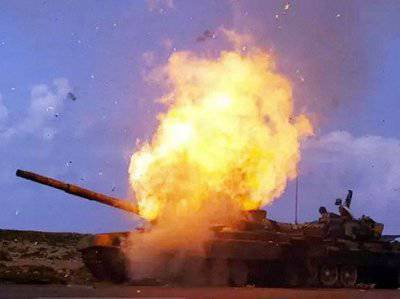 On Monday, a series of powerful explosions thundered in the village of Yekaterinoslavka, Oktyabrsky District, which is called “without declaring war”. People in uniform hurried to reassure the civilian population that nothing terrible had happened, but the official version of the planned exercises that were going on, to put it mildly, caused contradictory feelings. In any case, the eyewitness accounts of the fiery extravaganza greatly diverged from the educational legend of the military.

Let's leave the official version for later and look at the event through the eyes of civilians who have been watching the events from the outside.

- At around 14 p.m. two people left the territory of the military unit tank, almost immediately after that, one car caught fire. At first, the first clap rang out, most likely the fuel in the gas tank exploded, an eyewitness suggests. - Then there was a series of powerful explosions, it looked like shells were tearing. The fire immediately spread to the second tank, an explosion again, the tower was torn off by the tower, it took off about 20 meters into the air and fell near the guardhouse .., everything was covered with black smoke.

- The fire began to rapidly approach our gas station. We were scared. They asked to urgently leave the territory of those who came to refuel. We thought that we, too, can jerk. All staff has gone a safe distance. Watched as the fire engine went to the site of the explosions. The firemen managed to put out the fire in the field, preventing it from getting to the gas station, ”one of the station's employees shared the“ indescribable ”sensations.

“The road from Yekaterinoslav has been blocked,” says another witness. - I do not remember exactly, we stood for about half an hour. We saw clouds of black smoke, saw a damaged hospital building, and windows were broken in it. Someone said that the tanks explode.

Information about the tank explosions received in the Amur Ministry of Emergency Situations. The appearance of black smoke was also recorded in the administration of the Oktyabrsky district.

“Indeed, the signal came to us from local residents,” explained the head of the press service of the Main Directorate of the EMERCOM of Russia in the Amur Region, Raisa Kopyrina. - But these are objects of the Ministry of Defense, therefore they are not letting us in there.

The press service of the 35 Army did not immediately destroy the tanks with fire, but they confirmed it, although they considered that the event was not so significant. The version of the military on a given topic was much more harmless than eyewitness accounts. If not to say more - they called the situation regular, practically conceived according to the legend of the exercise.

“During the instructor-methodical training in the compound deployed in the Amur region, according to practical actions of the tank crew during engine ignition, which were conducted on a tank model using imitation tools, an unauthorized burning of fuel residues occurred, after which the fire spread to the adjacent tank model.

The command of the compound decided to evacuate the models from the park and stop their extinguishing due to the possible explosion of fuel residues in the tanks. As a result of burning, two explosions of fuels and lubricants vapors occurred in fuel tanks.

There were no casualties or damage as a result of the incident, minor material damage was caused, ”the press service of the Eastern Military District reported.

Translated into civil language, it sounds like this: tankers on the model worked out actions in case of force majeure with an engine, but something went wrong, and these models, out of harm's way, were taken to burn out on the field.

Without questioning the “military” version of the incident, let us allow ourselves to ask a number of clarifying questions, without answers to which this officialdom sounds, to put it mildly, not very convincingly. The first: according to the official version, before the evacuation, both models were already burning, but eyewitnesses claim that the second tank caught fire only after the first car exploded. The second: how much fuel should be in the tanks of the layouts, so that, when ignited, disrupt the turret from the tank, raise it by two dozen meters into the air and knock out the glass in the building with a shock wave. Third: if banal mock-ups burned, even with real engines, then why didn’t the Ministry of Emergency Situations and civilian firefighters be allowed into the site of a fire? Fourth: how justified is it to conduct such training on the territory of the unit, stuffed with military equipment and arsenals. Wouldn't it be wiser to “play” with fire somewhere at the test site, away from the civilian population and the gas station? And the last: if no one was injured and it was stated that the material damage is insignificant, then why a special commission will deal with the circumstances of the incident

Ministry of Defense from Moscow

As it seems, these questions do not in any way discord with the official version of the military, which means it is possible to put forward another, lying in the plane of a real state of emergency, with real military equipment. Not excluding the fact that one of the tanks could be with ammunition. If so, then the situation could unfold according to the following scenario: a tank fire (wiring, bungling ...) in a box or on the territory of a part - hastily evacuating it outside the gate with another tank and into the final - a series of powerful explosions, as witnesses testify. In this scenario, the special secrecy of the military in terms of the elimination of the state of emergency becomes absolutely justified.

However, these are just thoughts out loud, which can be dispelled or confirmed by experts from the Ministry of Defense. The only thing that I would like to believe with pleasure from the official army press release, that everything really did without victims and injured.

PS When the newspaper issue was being prepared for printing, the following information appeared on the official website of the Military Investigation Department of the Investigative Committee of the Russian Federation on the Belogorsk garrison: “According to investigators, about ten hours in May of the current year on the territory of the tank fleet of the military unit 20 a fire occurred T-21720 tank. When it was towed outside the park, the fire spread to another tank, which caused detonation and explosions of tank ammunition located in the indicated tanks. A criminal case on the grounds of a crime under Art. 80 of the Criminal Code of the Russian Federation (destruction or damage to military property through negligence).

Ctrl Enter
Noticed a mistake Highlight text and press. Ctrl + Enter
We are
About Stalin and KhrushchevWhat you didn't want to know about England
31 comment
Information
Dear reader, to leave comments on the publication, you must to register.