What is happening in Syria is increasingly threatening the West 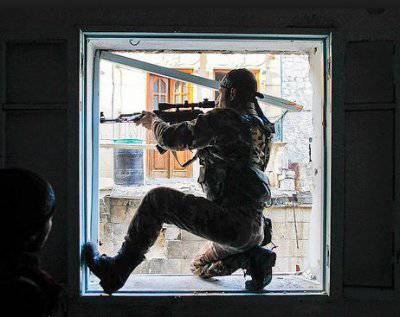 We recently talked about the situation in Syria, noting the improvement in the position of Assad. It must be said that Asad has been holding for such a long time about his not only his mind and wisdom, but also his excellent endurance. After all, for all the time, we have not seen a single breakdown of it, which the Western media would certainly have shown to the whole world. However, the situation is such that the Western media have less and less desire not only to show, but even to mention Syria. There have been serious progress.


All of these "not the most pleasant news"Are becoming more and more dangerous. As it turned out, the conflict has already gone beyond the borders of Syria, and it is precisely with this that President Obama’s statement that the United States refuses the prospect of a ground operation. For us, this is not news at all, and our readers are well aware of this. However, there are some moments that turned out to be unexpected news for us.

In the city of Quasir, which for quite a long time has been the object of a struggle for possession, there was a turning point between government forces and hired killers, whom the West affectionately called fatherly insurgents. In the beginning, it was said that Assad used especially dense aerial bombardments and heavy mortar fire, which led to the fact that the 18 militants were killed and about 300 injured. This is the official data from the other side. However, we have other information.

Over the past three days, more than 500 terrorists have been injured and more than 60 have been killed. In addition, Abu Muhammad Golani, the leader of the influential Syrian terrorist Islamic group Front Al-Nusra fighting against the legitimate authorities in Syria, was wounded during the confrontation, according to other sources. All this became possible because Assad received serious reinforcement and new tactics of warfare. In the West, they suspect that this is Russian know-how. Export not only weapon or ammunition, but using their connections with the Hezbollah movement, the Russians developed a concept that allows using a certain synergistic effect.

The thing here is how it turned out. The fact that Hezbollah has recently been mentioned more and more when it comes to the Syrian conflict is no longer surprising. However, as she now begins to fight, there is some element of surprise in this. Hezbollah is now using partisan tactics. That is, located in the rear of the “insurgents”, Hezbollah’s militants are very active and productive in dealing damage to those who recently spoke of the imminent fall of President Al-Assad. Now there is a panic in their ranks.

Announced a meeting of Assad and the "rebels", dictated by necessity. If the rebels would not agree, then in the near future it could have happened that there would simply be no one to negotiate with Assad. But this new technology is not over. Hezbollah not only helps in Syria, but begins to confront those who plan and coordinate the activities of the "rebels" from abroad. For example, in Lebanon, activists planning operations against Assad were attacked. Of course, the Assad regular army does not have such capabilities, but Hezbollah easily copes with this task. In addition, Hezbollah is expanding the geography of the conflict. Now Israel was among the targets. On the Golan Heights, night skirmishes have been taking place for more than a month, which frankly irritate Israel. Everyone remembers that a week ago Israel bombed objects in Syria. All this happened because Hezbollah is already seriously threatening Israel, harassing it with pinpoint actions, due to which Israel is forced to keep its troops on high alert, which, as it turned out, is not at all a cheap occupation. Military damage to Israel from Hezbollah is not so great yet, but financial damage practically bleeds blood from the Israeli economy.

The Israeli military is declaring their determination not to allow destabilization of the situation inside the country, but the population feels increasingly insecure. The commander of the Israeli Defense Forces of the General Staff, Lieutenant General Beni Ganz, confirmed that the situation in the Golan is becoming increasingly unstable, he said: “I am not a belligerent person, but we must be ready to protect ourselves. In general, the situation in the Golan Heights is becoming increasingly unstable. ” Let us leave on the conscience of the Israeli general a statement about his “not militancy”.

However, what was happening to the militants from the Syrian Free Army (FSA) was a complete shock. They are stunned and demoralized. Qasem Tilavi, the commander of the SSA, said he did not expect Hezbollah to cooperate with Assad. In such conditions, it may be possible to talk about organized confrontation for several more weeks, then only separate centers of resistance will remain, which will simply be filled with the popular anger of the Syrians. Here, the United States could have saved the situation by sending troops, but this definitely will not happen. NATO troops could also help, but this will not happen. Thus, it turns out that there is only one way out - negotiations without preliminary conditions.

In addition to all the troubles, there are also those who suffer direct financial losses in this conflict. This is the UK. Premier Cameron is practically beside himself with rage, practically pushing through an agreement with France on the recognition of Hezbollah as a terrorist organization. However, what will it give? Well, it will probably give something, but the main thing that can be put on pressure is for Assad to refuse to cooperate with "terrorist" Hezbollah. Thus, Cameron wants to break unity in order to avoid the synergistic effect that destroys the "insurgency" in which Britain invests a lot of money. The British, who killed more than half the world for money, will now calmly watch how their money turns to dust? This is what worries Mr. Cameron to intestinal hiccups.

Israeli military press attache Captain Eitan Bukhman said that the shootings at night in the Golan Heights caused much less damage to the military party than the Syrian side said, but in response the soldiers killed the attackers with two missiles. According to the Syrian news agency SANA, the Israeli army patrol SUV was destroyed, and the military attacking him managed to escape safely. Recall that the incident occurred in Syria. An Israeli patrol drove into Syrian territory.

As it turns out, the Israel Defense Forces (IDF) in the Golan Heights is often brought weapons there. So in one of the night raids an Israeli truck was found on Syrian territory, which delivered ammunition. This indicates the direct participation of Israel in the Syrian conflict. What Israel could win from the victory of terrorists in Syria is not known, most likely it would have lost very large. However, now that everything has become known, millions of people have begun to hate the Jewish state even more.

Who, then, is guilty of growing anti-Semitism? In the Syrian operation, the United Kingdom also did not win anything, but frankly lost. Now when they push another agreement to make new outcasts from Hezbollah, who are probably not saints, but much more honest than the British crown, as a result, many people will increasingly hate the British, Who is to blame for this? As it turns out, the war in Syria is a huge reputational risk and loss for the West. However, the West has no other way out. It turns out that the West was a hunter, but turned out to be prey.

Ctrl Enter
Noticed a mistake Highlight text and press. Ctrl + Enter
We are
What you didn't want to know about EnglandInterview by President Bashar Al-Assad to the Sunday Times
78 comments
Information
Dear reader, to leave comments on the publication, you must to register.