The United States sent to the eastern Mediterranean two submarines 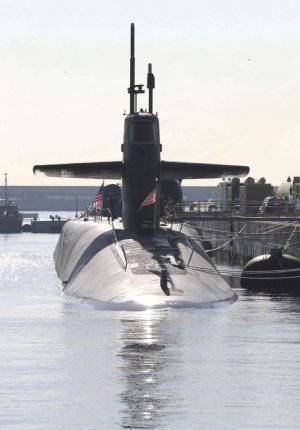 Washington, to maintain safety at sea, sent two Ohio-type nuclear submarines to the eastern Mediterranean, each of which was converted to cruise missile carriers and has 154 Tomahawk missiles with 1 distance thousands of 600 kilometers, the US Navy press service reported .


One of these submarines - "Florida" (SSGN 728) - went to the naval base on the Greek island of Crete. A few days earlier, another submarine called “Georgia” (SSGN 1) called at the same base, located approximately at 100 thousand 729 km from the Syrian coast, “Red Star” reports with reference to Interfax.

Both submarines assigned to the Kings Bay Naval Base (Georgia) are currently at the disposal of the sixth operational fleetwhose area of ​​responsibility includes the Mediterranean Sea.

As for the tasks that these missile carriers must solve, the Navy information service claims that they are “sent to conduct operations to maintain maritime security and cooperate in ensuring security in a theater of operations in the area of ​​responsibility of the Sixth Fleet”.

The crew of the Florida submarine has experience of active participation in the NATO operation against Libya Sunrise Odyssey in March 2011, when the submarine launched a total of 93 cruise missiles at targets in Libyan territory.

Independent observers have linked the publication of the United States Navy command information about the presence in the eastern Mediterranean, two submarines equipped with cruise missiles, the situation in Syria. Apparently, in Western circles are concerned about the increased activity and the success of the government forces in the fight against gangs and trying to put psychological pressure on Bashar al-Assad and his inner circle.

Ctrl Enter
Noticed a mistake Highlight text and press. Ctrl + Enter
We are
Ohio type U-boat arrives in Korean peninsula
38 comments
Information
Dear reader, to leave comments on the publication, you must to register.